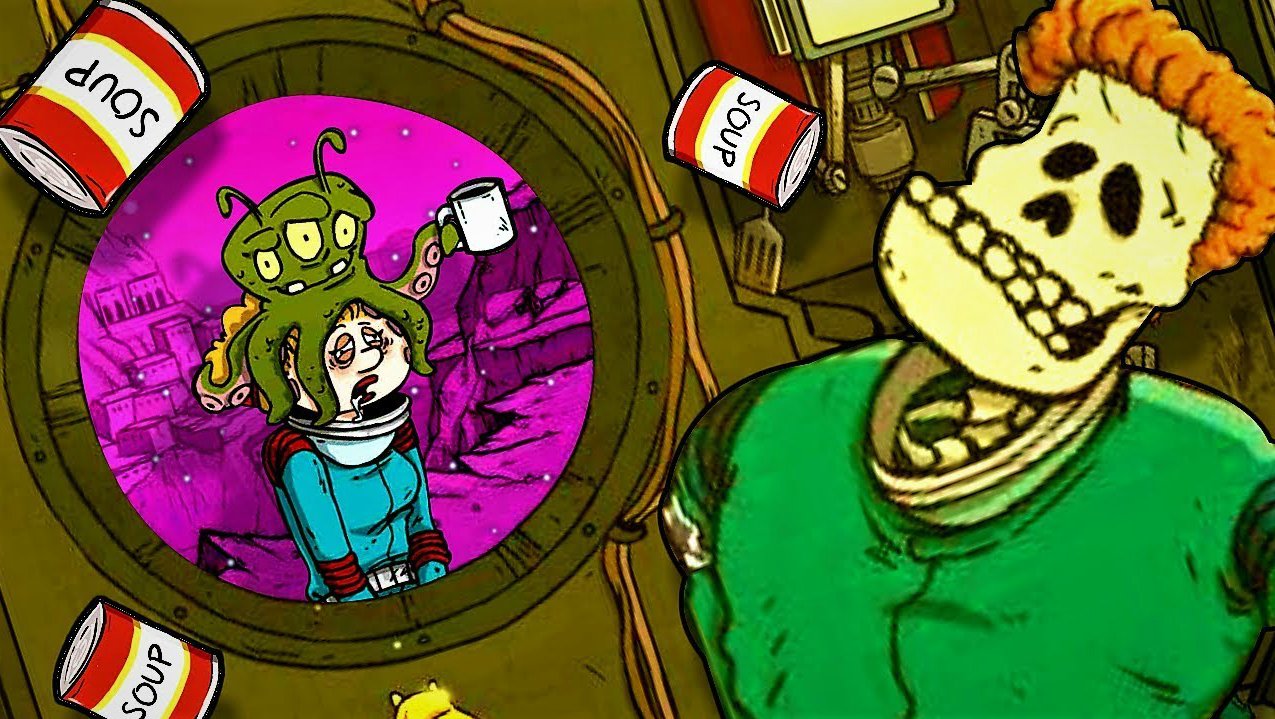 Survivalism is a huge deal across the United States and beyond, but I have always seen it as gaming the system. Preparing for some unforeseen disaster scenario by stockpiling supplies is very much akin to preparing for some unforeseen jump in beanie baby pricing by hoarding the toys. At best it is wishful thinking, and it ultimately just looks like simple collecting. A true survivalist is going to be able to scrounge what he or she needs in the imminent moments before disaster and manage to stay alive despite the sudden destruction of everything around him or her.

That said, the true face of survivalism is grim death. Rare long-term survivors, even among the trained and prepared, will sift through countless piles of the survivalist dead. 60 Parsecs manages to drive that vile point home, albeit via a cartoonish vehicle powered by an engine of silly humor. This theme, the design, and the overall humorous tone combine into one of the darkest games I have ever played. Simple, quick, and instantly replayable, 60 Parsecs is a surprisingly addictive mindtrip in space.

60 Parsecs is a decision making game. Earth is just a few moments away from total annihilation, which means that the space station you and your crewmates inhabit is also soon to be toast. In those moments you must gather your crewmates, supplies, and weapons and board an escape vessel. Once aboard the vessel you find yourself transported 60 parsecs from Earth, into a deep and empty space.

Your crew can consist of up to 4 people, including yourself. Each crew member has a special trait, from a scientist blessed with high intelligence to a former athlete past her prime but still more agile than the average schmuck. Supplies line the walls and floor of the ship, and you are able to have one of each item at a time, with the exception of cans of soup that serve as the crew’s only sustenance. You are expected to balance the health of your crew with the steady supply of needed goods long enough to make contact with civilization and be saved, lest you succumb to the horrors and space and die.

Each day you are given a rundown of the last day’s events, and you are tasked with making one important decision and managing supplies through crafting, upgrading, and recycling. Supply management is the primary focus. You will have a constant need for more soup, but also for various other items to either aid in your endeavor or keep yourself from dying. Supplies and materials are very sparse and hard to obtain, requiring a crew member to leave the relative safety of the vessel to scrounge and gather.

The game is very balanced with the stream of supplies you can obtain and the upkeep needed for you and the crew. Smart preparation can get you far, but it takes a lot of luck to survive. While in space you are very tethered to the supplies you gathered to begin with, but the game allows you to come across several alien worlds, each with their own story line and requirements, as well areas to explore and gather materials and supplies.

60 Parsecs boasts one of the creepiest products in my experience of playing video games. The game is largely lightheartedly designed, so the whole look and feel is cartoon fun. The crewmates gain these amourous grins and smirks as they gain confidence in or feelings for you. Meanwhile you are trapped in a room-sized metal tomb on a deadly alien planet, stalked by killer robots or communists, doomed to watch your crewmates as they wither from starvation and weakness.

The dichotomy is incredible and it really underscores the difference in tone between the good times and the bad. When everyone is happy, healthy and fed, it is smiles all around and everyone on board looks like they are having fun. When things are going wrong, the entire crew withers but refuses to let go of their optimism, creating a sickening cue for the madness of isolation and imminent death.

Combine this with the fact that 60 Parsecs gives you the ability to actively starve your crew while feeding yourself and watch day by day as they wither and die with happy smiles on their gaunt faces and you actively have a game hell bent on spreading insanity. I did it twice, and the first time I felt that I should live because I’m the captain. The second time, I felt nothing. I simply wanted more soup.

The game does have one general flaw in the music. It is one short clip that plays on repeat, and it employs that stereotypical alien noise effect via theremin throughout it. It’s not great and the fact that it repeats each time I play is a problem. It’s best to simply turn the music off and play with the ambient noise only. The game is also sort of repetitive with a lot of the early decisions to be made. I feel like it would have been simple to throw in a few variants of each task to keep each and every playthrough fresh.

The controls in the pre-game are also very clunky but I have a feeling that it is by design. It is the only active portion of the game, where you navigate a few rooms of the space station gathering crew members and supplies. I ran into walls and doors constantly, and felt like I was on a skateboard rather than on two feet. While there is some frustration, I do like that it makes it more frantic to gather starting supplies and it fits the overall aesthetic of silliness in a moment of high disaster.

60 Parsecs is a simple game about not dying in space. While not complex in gameplay, 60 Parsecs is incredibly deep with strategy, problem-solving, and smart resource planning. The game expertly blends a cartoonish and goofy world with some of the darkest elements of death and isolation. 60 Parsecs is a surprisingly fantastic game that has a large amount of replay value. It’s well worth a look.

Patrick Rost has been with Gaming Trend since 2013. At first focused on sports coverage, Patrick has gone on to cover a wide range of games and other products for the website. Outside of Gaming Trend, Patrick writes and records music, grinds perpetually in Elder Scrolls Online (PS4), and lives day to day with his two dogs, Bob and Stella.
Related Articles: 60 Parsecs!
Share
Tweet
Share
Submit