In some cultures, people are afraid of upsetting their god or gods. Even so, there are those within said cultures who either don’t care or decide to stand against them. In Warlocks 2: God Slayers, the Order of the Warlocks has angered the gods with their past actions. Now they stand against each other and the warlocks are making moves to destroy them. Warlocks 2 places you in a fascinating adventure as you fight for the Order and it creates an enjoyable journey along the way.

Warlocks 2 allows you to choose one of five characters, each with their own fighting style and abilities. I went for Shax the Spirit Lord; he fights using spirits, souls, demons, and the like. Each character has a starting attack that doesn’t cost any soul meter to use. For Shax, it’s firing a purple soul ball. As you fight and level up, you’ll earn experience. Every time you level up, you’ll get points to use in your skill tree. These can be used to unlock skills and also upgrade them. Skills can be upgraded up to level five, with the cost of upgrading increasing slightly. Even though you can unlock more than four skills, you can only have four equipped at a time. It’s a bit of a bummer that you can’t equip them all at once, but it does prevent overloading you with all your skills at once. 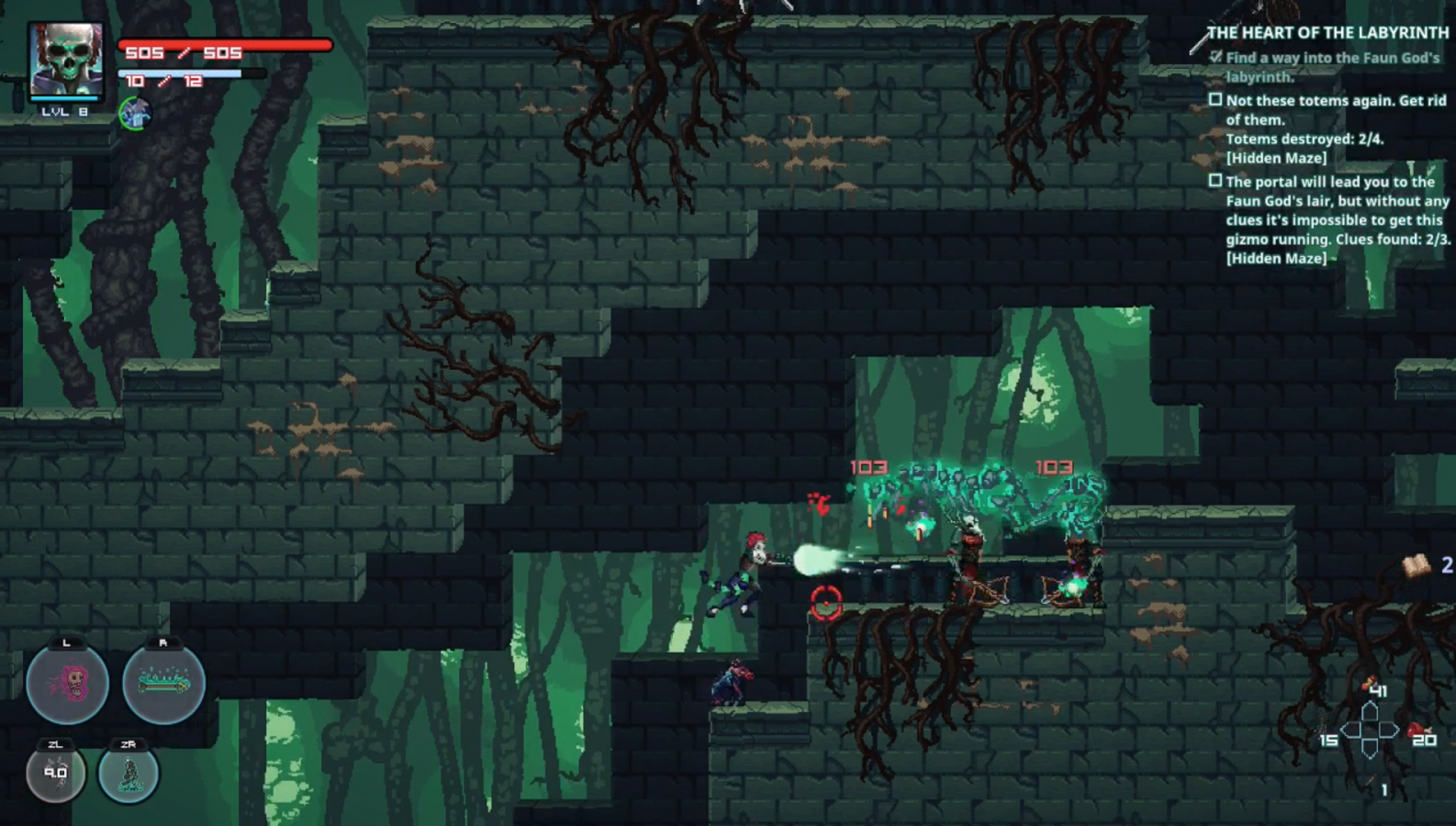 Unlocking more skills is very helpful since it provides you with more ways to fight enemies. All skills besides your starting attack cost soul meter points to use, so you’ll need to use them carefully. The upside is that your soul meter regenerates as time passes, so you can use your moves fairly often. As of writing this, my loadout was my starting soul ball, summoning a guardian spirit to fight by my side, firing a spirit arrow, and launching a stream of souls in a straight line. The guardian has been very useful as both a distraction and a way to take out more foes at once. The soul ball and spirit arrow are both tough projectile moves that help you keep some distance. The stream of souls is awesome because it not only damages all enemies in front of you, but it also pushes them as far back as it can on-screen. I haven’t tried every character, but there are multiple save slots so you can test everybody out if you choose to do so.

The game is an action platformer with equal parts fighting and platforming. As you explore various levels to complete quests given to you by the Order, you’ll encounter all manner of monsters. You’ll fight archers, floating skulls, giant boars, sentient totems, mole soldiers, and more. You’ll likely fight them head-on and spam attacks in order to defeat them. It’s not a bad way to fight, but as long as you aren’t fighting too many foes, it tends to work (at least in my experience). I’ve taken plenty of beatings throughout my time but only died in a few situations. The more frequent of these cases was fighting bosses. 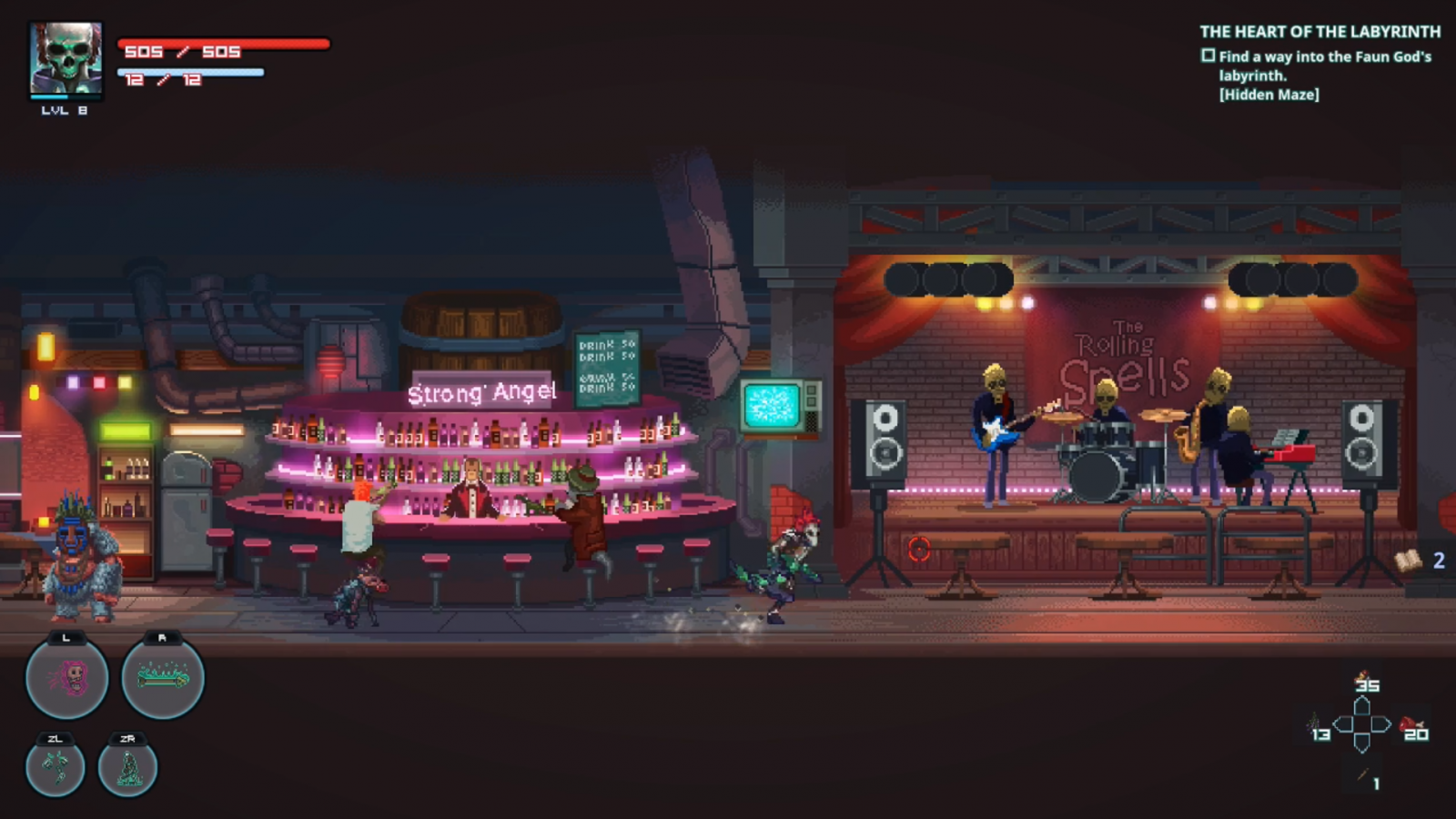 There are three planets with several levels in each. Each planet has its own mini-boss and end boss. The mini-bosses are tough, but they got nothing on the end bosses. It makes sense because the end bosses are gods that you are attempting to kill. The first end boss I fought, the Faun God, took me many times to beat. It was partially due to me learning how to use one of his moves to my advantage, but a lot of it was due to how strong he was. He even has four podiums that he can use to heal by eating the druids within them, Thankfully, a podium is useless after he eats the druid, but it heals him a good chunk of health. If you want to prevent this, you can attack the podiums to destroy them and then kill the druids, Be careful because the druids will fight back, but it’s worth it to stop the Faun God from healing as much.

As mentioned before, the standard combat isn’t that tough, but the boss fights make up for that in spades. I like the level of difficulty because it keeps the game approachable without being too easy. The toughness of the bosses may turn some people off or discourage them, but with enough effort and learning their attack patterns, you can overcome them. The combat does get a bit repetitive, but it’s not enough to hurt the game much. The graphics and sound design are good as well, so no problems there. All in all, Warlocks 2: God Slayers offers an enjoyable quest to join a mystical order as you help their members and slay gods.

Warlocks 2: God Slayers lets players work to become a powerful warlock as they help the Order and destroy gods. The combat can get repetitive, but isn't too challenging until you encounter the bosses. With several characters to choose from, you'll be able to fight in multiple different combat styles.

Codi loves to play video games and watch movies. He will watch almost any kind of movie just to experience them. His ideas take inspiration from the shows and movies he watches, and games he plays. He also loves a good pun.
Related Articles: Warlocks 2: God Slayers
Share
Tweet
Share
Submit