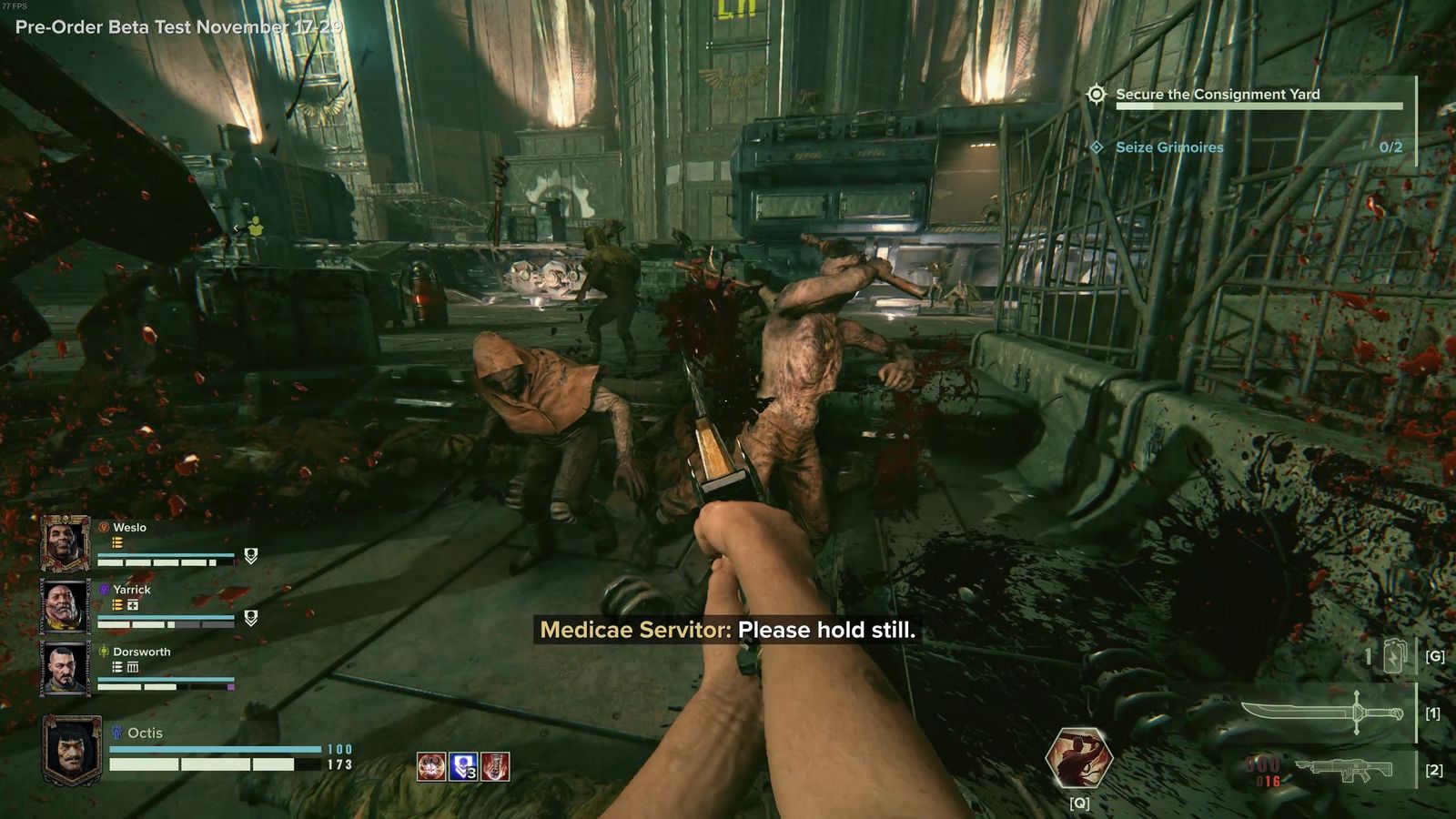 Player vs Enemy, even just saying those words gets me uncomfortable. We’ve had many games in the past come out from this genre, and of the 100 or so released, we might get one or two gems hidden in the sand. Most recently, I’ve played Aliens: Fireteam Elite, which we reviewed for a whopping 100/100. And honestly, that game hits the mark of what a PvE game should be. It’s tense, the environment, enemy types, and art style push a perfect sense of dread, all as you navigate through caverns and ancient structures that captivate your interest and have you say “woah…” every turn you make.

But… well, you know where I’m going with this… 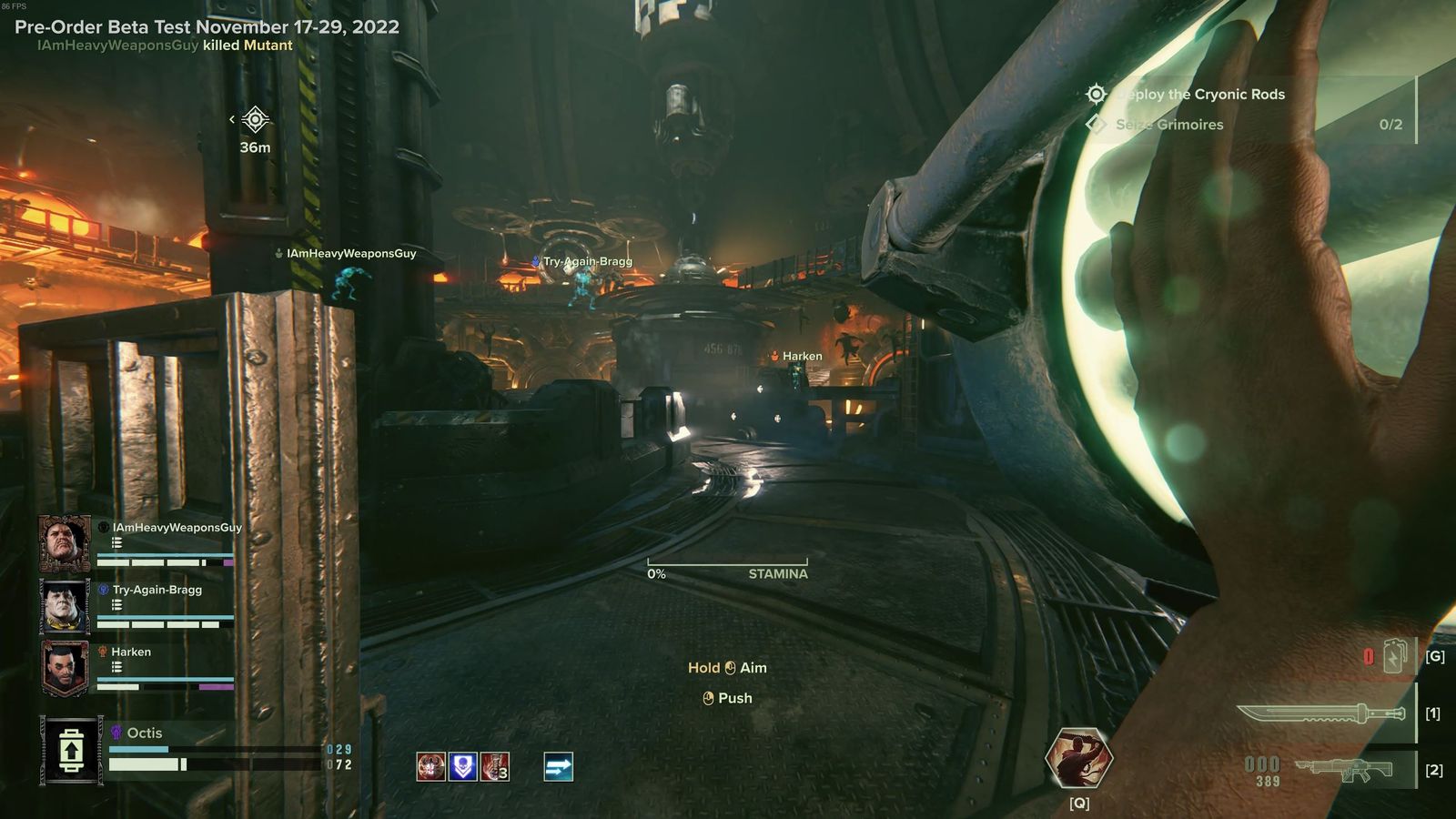 That’s a question we’ll answer as we detail exactly what this game has to offer. First, the story; what’s it like? Well, if you know even a smidge of what the Warhammer 40K universe is capable of, then you know that it’s completely nuts. This IP has the most detailed lore I’ve ever come across (one that I can’t even begin to understand), albeit not as insane as Ace Combat’s, sure, but that’s a whole other thing.

Darktide has you start as a prisoner, one that you decide the backstory of. This part is time-consuming, but it paves the way for how your character will interact with the world and its characters. Hearing my Zealot go nuts when he’s “cleansing” (beheading) the “impure” (everything with a heartbeat) all the while he’s chirping remarks back at the other player characters always brings a smile to my face. After escaping a huge horde and making your way back to the extraction, you’ll find yourself on the Mourningstar; the Inquisitor’s low-orbit starship. Here is where you’ll kit up at the local armorer, upgrade your weapons at the forge, alter your character’s appearance at the stylist, or meet and chat with other players currently playing Darktide. At the very heart of the Mourningstar lies the Mission Terminal. This is where you’ll select the next campaign mission and further push along the story.

On launch there will be a total of 13 missions, and while that might not seem like much, trust me — that’s plenty. A lot of the time you’ll be failing the missions, or grinding through old ones just to increase your gear for the much harder missions. Your task is to take back the Hive City of Tertium from the inhabitants who have corrupted it. Slowly and surely you’ll make your way through the hive, navigating through decrepit factories of the now decaying cityscape. You’ll serve the Inquisition as penance for them letting you escape your jail cell, and work with your team (either bots or players) to cleave through the many, many hordes that you’ll come to face. 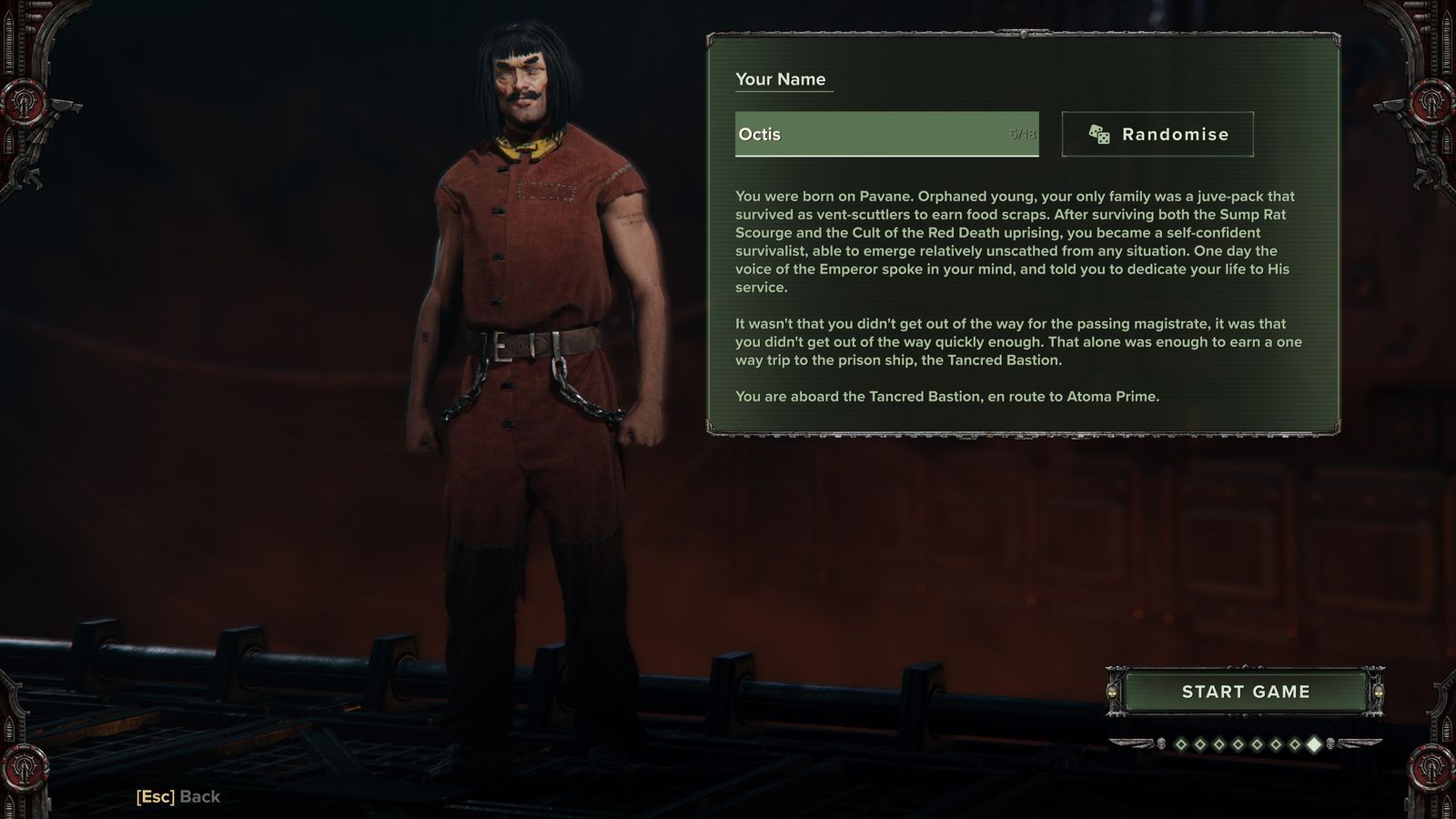 I chose the Zealot: Preacher, who’s built to be a melee machine. It’s insanely OP in times of utmost distress (AKA all the damn time) because I’m able to resist death after taking on lethal damage. There have been times when I’ve had to balance on 4 HP just because I was constantly building armor from melee kills, and the Zealot’s death resistance was just enough for me to keep me alive and provide support to my team. Every character also gets class abilities, with some being far superior than others. So, because the Zealot is designed for melee players, this ability lets me dash forward and force all enemies I hit to resort to melee. This is insanely powerful when your team is down on ammo and you have a huge horde charging you down.

Of course, the Zealot isn’t the only playable character available. There’s Ogryn: Skullbreaker, the beefiest and most hectic class type available. Ogryn is insanely strong, so much so that when it uses its class ability “Bull Rush” it will knock down most enemy types in its path (of course, this doesn’t apply to bosses otherwise that would be a little too OP). Like the Zealot, Ogryn has increased melee damage. It’s able to generate more toughness, which is the game’s armor, and is replenished each time you get a kill. Now, I don’t want to spoil the fun, so I’ll leave this big fella at that. 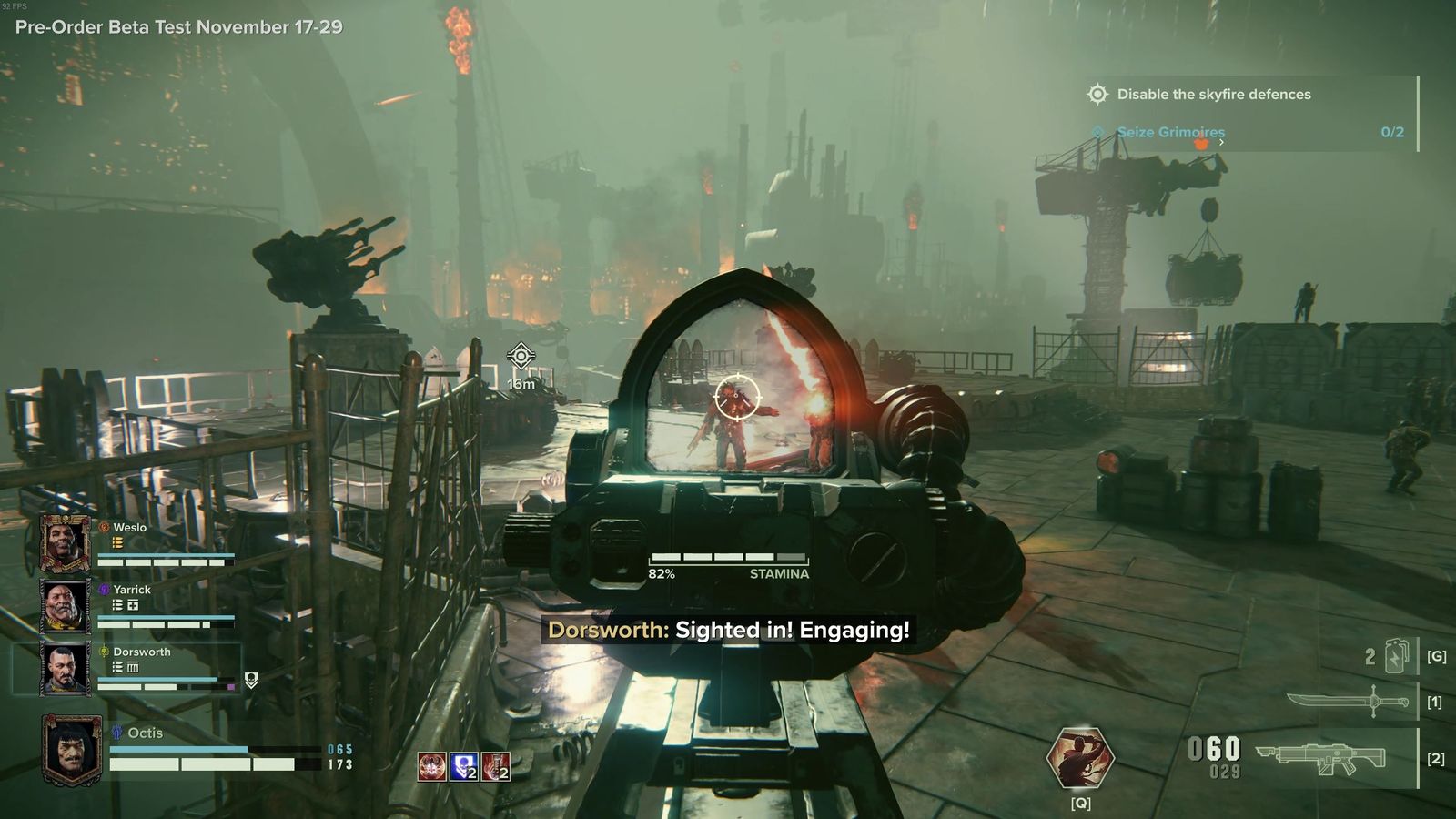 Both melee and ranged is available to all classes

The other two classes are Psyker: Psykinetic, and Veteran: Sharpshooter. The Psyker is the game’s mage, which does some of the coolest things you can achieve in the game. You can target various enemy types and cause “Brain Burst” — a one-hit kill machine. It’s seriously gory and seriously powerful — especially since it’ll wipe the biggest horde types in a single button press. Now, as for the Veteran, this is your resident Soldier: 76, your go-to for Call of Duty players. They have one-tap headshots, huge ranged combat damage, and have the special class ability that slows their movement, increases weak spot damage on bosses, and increases handling and accuracy.

All four of these together? Unstoppable.

Now the best part of Warhammer 40,000: Darktide is that each character has such incredible strengths, so much so it doesn’t matter if you have 4 Ogryns, or 2 Psykers and 2 Zealots — you can fill your team with whatever classes just as long as you get the job done. And that mentality is where it stands out from most other PvE games. You don’t need a resident healer or support player to assist the team when times get tough, and that’s so important in this genre. PvE is about having fun, and that’s exactly what this game provides — in spades. There’s no greater feeling that this game provides than having your entire squad stand by you while you await a horde of over a hundred enemies charging you down, and cleaving through — limb after limb, head after head. 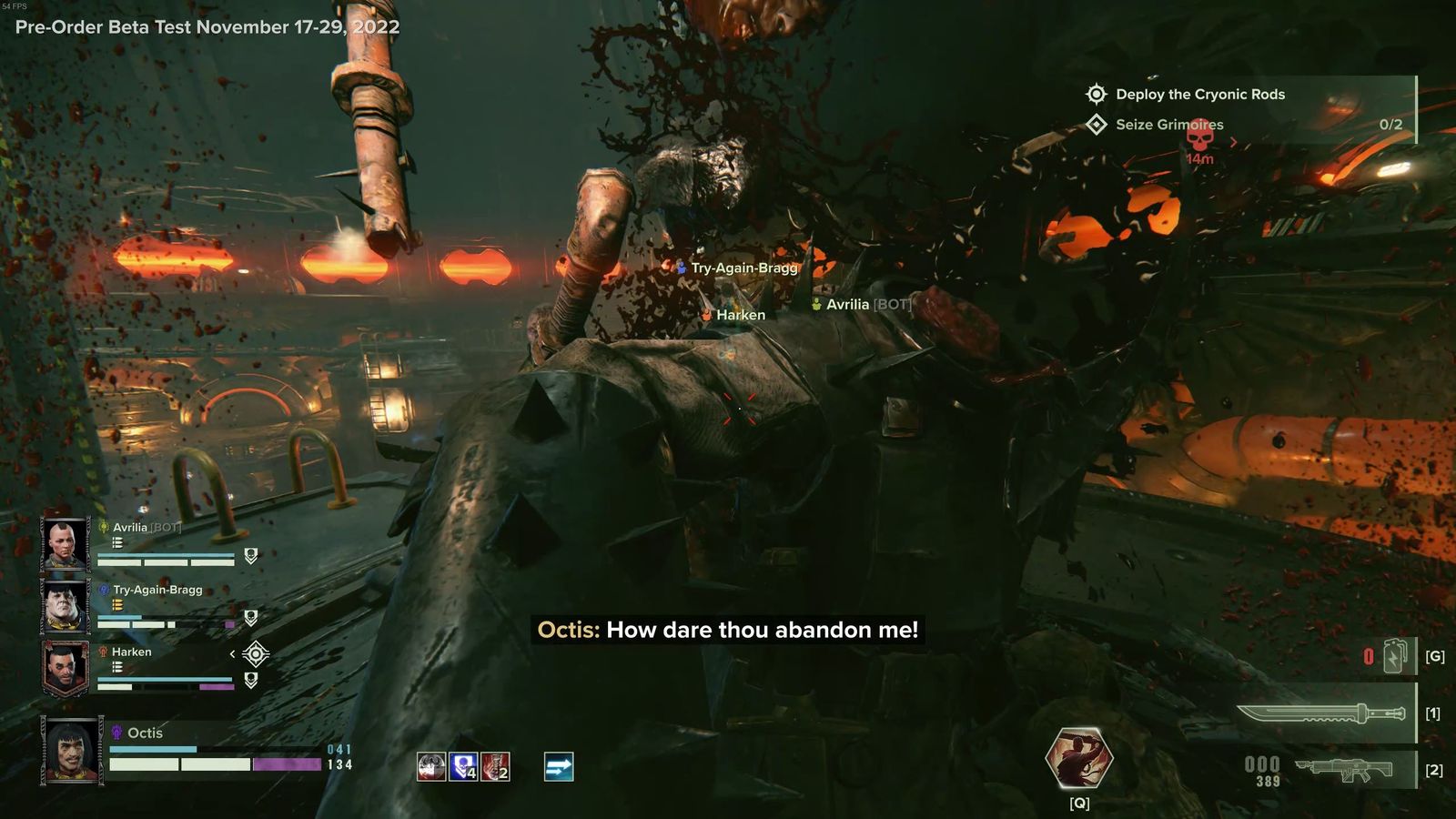 The developer, Fatshark, promises a very active Year One. There are no plans for a battle pass at the moment (thank the heavens), but there will be a heck of a lot of things to do and experience to minimize on the repetition of the gameplay — which, of course, there is. Fatshark promises to change certain… conditions of the gameplay loop. Things like in-game events or circumstances (whatever that may mean), are subject to change and evolve. Why do I bring this up? Well, repetition kills games. I have over 150 hours on Elden Ring, but I can’t bring myself to do my fourth playthrough. But Rainbow Six: Siege? I’ve clocked over 700 hours in that one. Why? Because one is constantly evolving and refreshing, and the other (don’t lynch me) can only really be experienced a certain amount of times before the content gets boring. That seems to be an important part of Warhammer 40,000: Darktide’s development, and that’s something worth noting.

Now, of course, not everything is perfect in this title. It’s absolutely fun, that’s a no-brainer, and it’s incredible rewarding, but it’s not without its downsides. Namely, optimization. This is running on medium-to-high graphics on my 3060 Ti GPU, i7-10700KF CPU without RTX but with DLSS’s Quality mode. With that, I’m getting about 75 FPS, and that drops to 50 FPS in the horde fights. Of course, what this game has accomplished explains why the FPS is that low and drops down that significantly. But, for what’s meant to be a powerful PC, this game makes me feel like I’m running Minecraft on a Macbook Pro again. Maybe it’s a few generations too advanced. 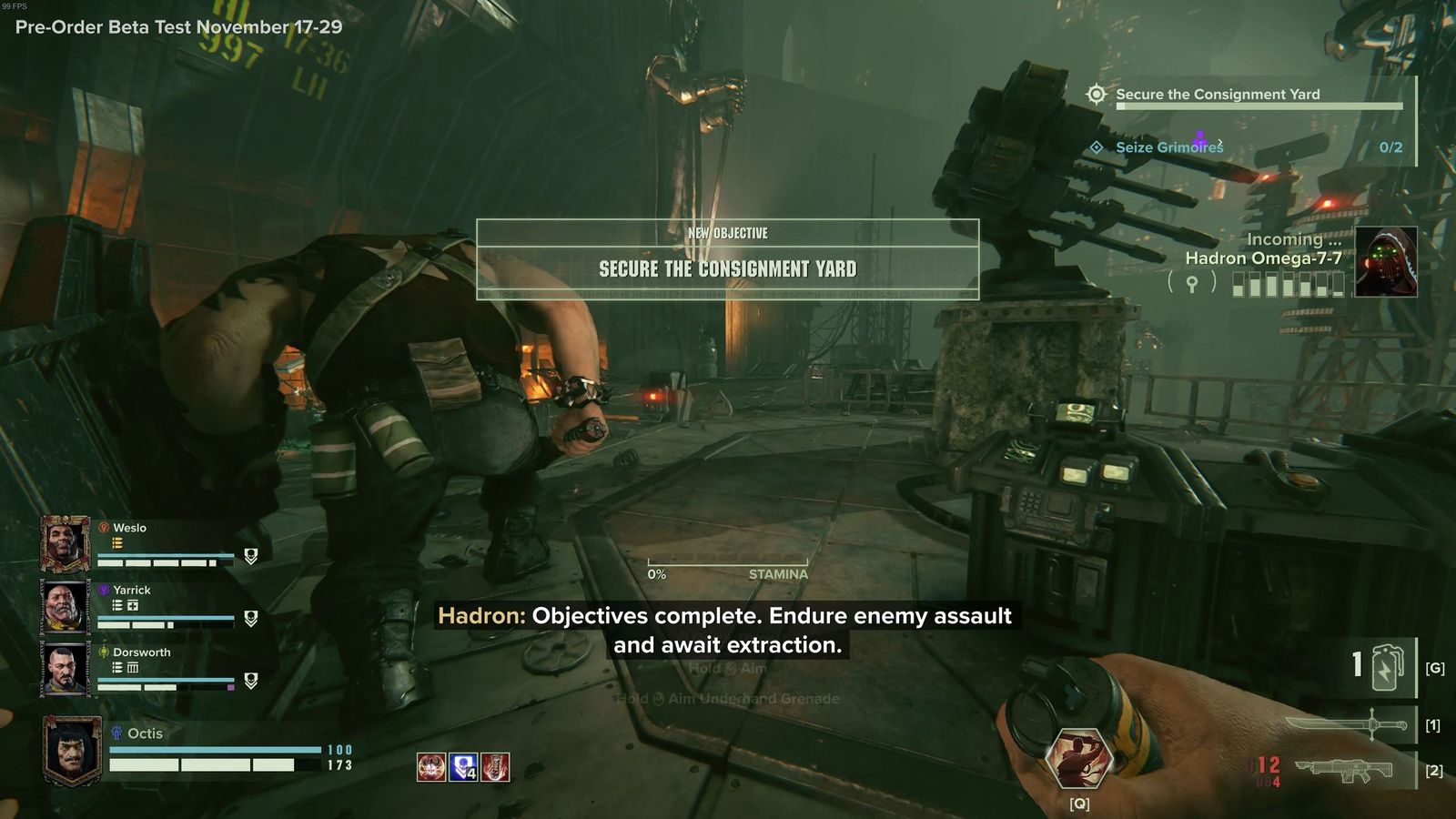 On way to extraction

The other gripe is (of course) repetition. You will need to get through the hard slog of repeating missions to afford better gear and unlock traits, as well as increasing your trust level so you can complete harder difficulty missions. Sure, you can say “git gud” but it’s tough communicating with people without mics to discourage them from living out their dream of being Rambo and firing wildly through the air to knock off a couple more enemies. It also doesn’t help when the game’s Netcode can sometimes be compared to a stale piece of bread. I was on a Level 3 difficulty mission with a group of equally under-leveled strangers, and we somehow managed to push through the mission death after death to reach the extraction point. One player takes his sweet time getting onto the helicopter, and we’re shooting down hordes of foes as he’s living out that Rambo dream all the while yelling at him to hurry the hell up. The moment their foot touches the helicopter, a message pops up…

You have been disconnected from the mission.

It was the second game of the night, but I couldn’t play anymore. That was so disheartening, and it worried me that that would happen again. Underlevelled? That’s something you can work on. But connection issues right at the end? That’s completely out of your control. In my anger, I message global chat in the lobby, and one user pipes up with the exact same issue the night before. So clearly, it wasn’t a once-off.

Warhammer 40,000: Darktide is fantastic, it really is. The gameplay is amazing, and while it can be repetitive now, the devs do promise that that will change as the year progresses. The lore surrounding the hellish landscape that is beautifully portrayed by the insane details mustered by the art team is equally unsettling as it is gorgeous. Once the game’s bugs and optimization issues are ironed out, I’ve no doubt this will be one hell of a game to play for hours on end.

Warhammer 40,000: Darktide is one of those games that oozes fun, no matter how you play it. It lends itself perfectly to all playstyles, and has this natural way of immersing the player in its world. That might be from the unique RPG system, the insanely detailed environments that make you feel like you’re really walking through this huge hellscape, or maybe it’s just the gratuitous violence. Whatever the cause, it’s doing a great job of keeping me hooked. Of course, the game isn’t without its cons, and these do detract from an otherwise solid experience. Regardless, it’s a game that I will absolutely be coming back to time and time again.

With a deep interest in writing, Ben followed that into a Journalism degree. As an avid lover for gaming, he is constantly expanding his library with console, PC, and VR games. He's obsessed with stealth games and loves hunting down the smallest of details inserted by devs.
Related Articles: Warhammer 40k: Darktide
Share
Tweet
Share
Submit