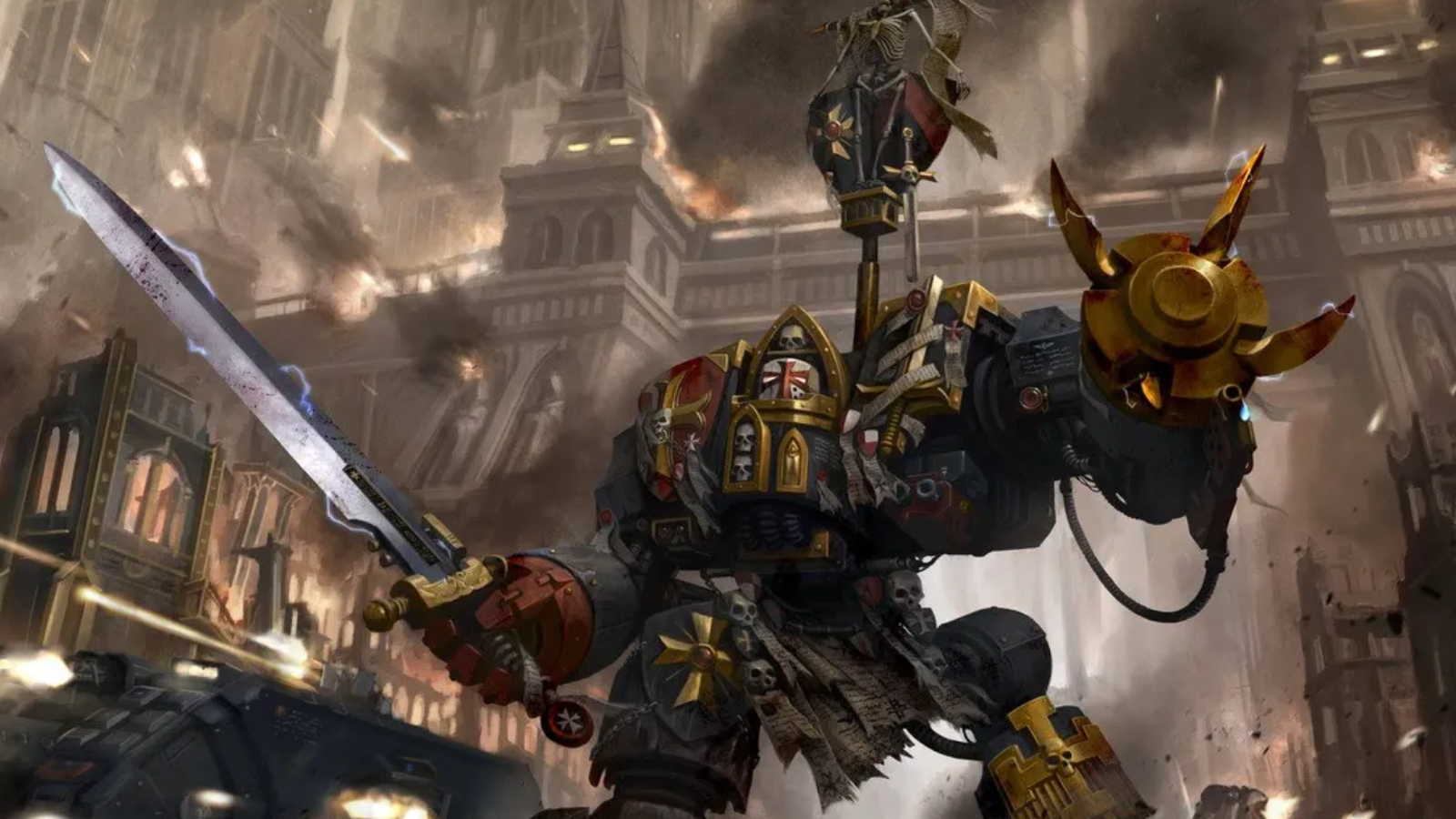 I absolutely loved Warhammer 40,000: Chaos Gate – Daemonhunters when I reviewed it earlier this year, so it shouldn’t come as a surprise when I tell you that this first expansion, Duty Eternal, was an exciting surprise. It further evolves the core gameplay of Daemonhunters with fresh lore, troops, weapons, and much more. We have purpose, Space Marines – let’s get started.

One of the most challenging parts of Daemonhunters was the way the Bloom remained unpredictable. It could pop up and spread at any time, twisting friend and foe alike. Worse still, it would mutate rendering previous tactics ineffective. In Duty Eternal we see the rise of a new mutation known as the Technophage. This newest strain of the Bloom joins the already-overwhelming infection that continues to spread across the galaxy. If you already felt like you were getting trampled, Duty Eternal isn’t going to help with that feeling. To bring the forces of the Nurgle to heel, you’ll need something with far more firepower.

Whether you are starting from scratch or mid-campaign, you’ll eventually receive a distress call from a planet named Dyronan IV. A squad of Grey Knights are under attack on the planet’s surface, and they are in need of support. This “Allies in Need” mission is flagged as “Hard” and that’s no joke – it is absolutely brutal, even with the help of a Venerable Dreadnought in the field. I took my best troops to the surface of the planet and brought them back mostly in one piece, but just barely. Below is my uncut 46 minute run of this mission, and I think you’ll have to agree – I barely escaped sending my brand new Dreadnought to meet the Deus Mechanicus. Come prepared, or be ready to be reunited with the God Emperor himself.

Duty Eternal is more than the name of this expansion – it also refers to the dreaded honor bestowed upon your most dedicated Grey Knights. If a Knight is critically wounded in the field, they might be chosen to embody a Venerable Dreadnought – a massive hulking armored behemoth over three times the size of a normal man, and absolutely lethal at any range. More than just a simple powered armor, this Dreadnought is the Space Marine, encased and fully integrated into the hulking beast, but only made more capable of bringing devastation to the enemy. Similarly customizable, you’ll bring this new combat walker to the field after you complete an early mission in the new campaign for the expansion.

While you can use basic Servitors to repair the flesh of your Grey Knights, keeping a Venerable Dreadnought requires a different discipline entirely. For that purpose you need a Techmarine. Not long after you find the Venerable Dreadnought, Grandmaster Kai will grant you access to recruit the Techmarine. He arrives with several specialized Servitors for repairing machines, as well as their own mechadendrites – the extra mechanical/prosthetic hybrid arms attached to their spine. These allow you to maintain the mechanical behemoths in the field, but don’t mistake them for simple metal medicus – they come equipped with an Omnissian Power Axe and Combat Servitors of their own.

During the mission above, you help a semi-downed Venerable Dreadnought finish his mission, but it’s far from complete. No, to fully recruit him you’ll need to help him close it out, and that’ll require putting another two very difficult missions in the rear view mirror.

Daemonhunters is nothing if not well balanced, so you know that Complex Games isn’t about to give you something as powerful as this massive juggernaut without throwing some fresh Nurgle-spawned monsters in to counter. It’s not long before you start seeing some new units on the field that can cause some real damage. One of the things I personally enjoyed was discovering these monsters myself, so I’m not going to reveal them here other than one – a Doomglaive-toting crusher. Even sturdy full cover won’t save you from this floating monstrosity, or its crusher implement, but it’s worse than just being knocked out of position – they can knock you off of nearby cliffs. Stay mobile. The other new monsters aren’t your bog standard corrupted marines or shambling beasts, but I leave those to you to discover. As it was in Daemonhunters, many of them are even more disgusting than you might imagine.

Eventually you’ll run into the biggest threat of Duty Eternal (beyond the boss-sized beasts) – the Technopage Elite. These special units specialize in anti-armor attacks, resist stuns, and are extraordinarily dangerous to anything mechanical. Techmarines and Dreadnoughts, as well as their support units and Servitors, are especially vulnerable. You’ll want to dispatch these quickly lest you lose your most valuable game changers before they can turn the tide for your team.

To help you handle these new monsters, both the Techmarine and the Venerable Dreadnought can be upgraded just like your standard Grey Knight. Similarly, they can be equipped with a wide variety of weapons. The Dreadnought comes with a handful of weapons pre-equipped, including a plasma gun and a smoke grenade, but a total of seven await your discovery and deployment. I personally like covering the field with the cleansing power of the flamethrower.

Unlocking these weapons and armors comes from a new resource to the game – Archeotech. Like seeds, these can occasionally be uncovered during a battle, but most of the time you’ll mine them from the planet’s surface. Clearing planets rich with the material will set up a small timer over the top of that planet, and as long as you hold it, it will periodically pop out Archeotech waiting for your next pass-through for pickup.

The last major improvement to Daemonhunters is the Gladius Frigate. If you’ve ever felt like the galaxy is far too large to cover, even for a flagship like the Baleful Edict, then you’ll appreciate the Gladius. This craft acts as a secondary flagship for your efforts to purge the heretics, allowing you to deploy some of the otherwise-idle marines in your crew to accomplish a secondary objective. This is handled by the AI and is effectively “off camera” work, but it allows you to suppress the Bloom explosions more effectively. Those marines are still taking risks, but they can also reap rewards. They can also end up dead, so be mindful of your crew compliment’s level and equipment – set them up for success, or you can expect less than ideal outcomes.

Frankly, I can’t find fault with Duty Eternal. It folds in neatly with a brand new game or an existing one, and it adds enough content to make it worth jumping back in even if you’ve already completed Daemonhunters. Frankly, now that I’ve added Duty Eternal to my game, I can’t imagine playing without it.

At just $14.99, Duty Eternal introduces some fantastic new mechanics that seamlessly integrates into an ongoing game or a brand new one. Unleashing the awesome power of the Venerable Dreadnought, I cannot imagine playing Daemonhunters without it – truly, a must have.

Ron Burke is the Editor in Chief for Gaming Trend. Currently living in Fort Worth, Texas, Ron is an old-school gamer who enjoys CRPGs, action/adventure, platformers, music games, and has recently gotten into tabletop gaming. Ron is also a fourth degree black belt, with a Master's rank in Matsumura Seito Shōrin-ryū, Moo Duk Kwan Tang Soo Do, Universal Tang Soo Do Alliance, and International Tang Soo Do Federation. He also holds ranks in several other styles in his search to be a well-rounded fighter. Ron has been married to Gaming Trend Editor, Laura Burke, for 21 years. They have three dogs - Pazuzu (Irish Terrier), Atë, and Calliope (both Australian Kelpie/Pit Bull mixes).
Related Articles: Warhammer 40000: Chaos Gate – Daemonhunters – Duty Eternal
Share
Tweet
Share
Submit