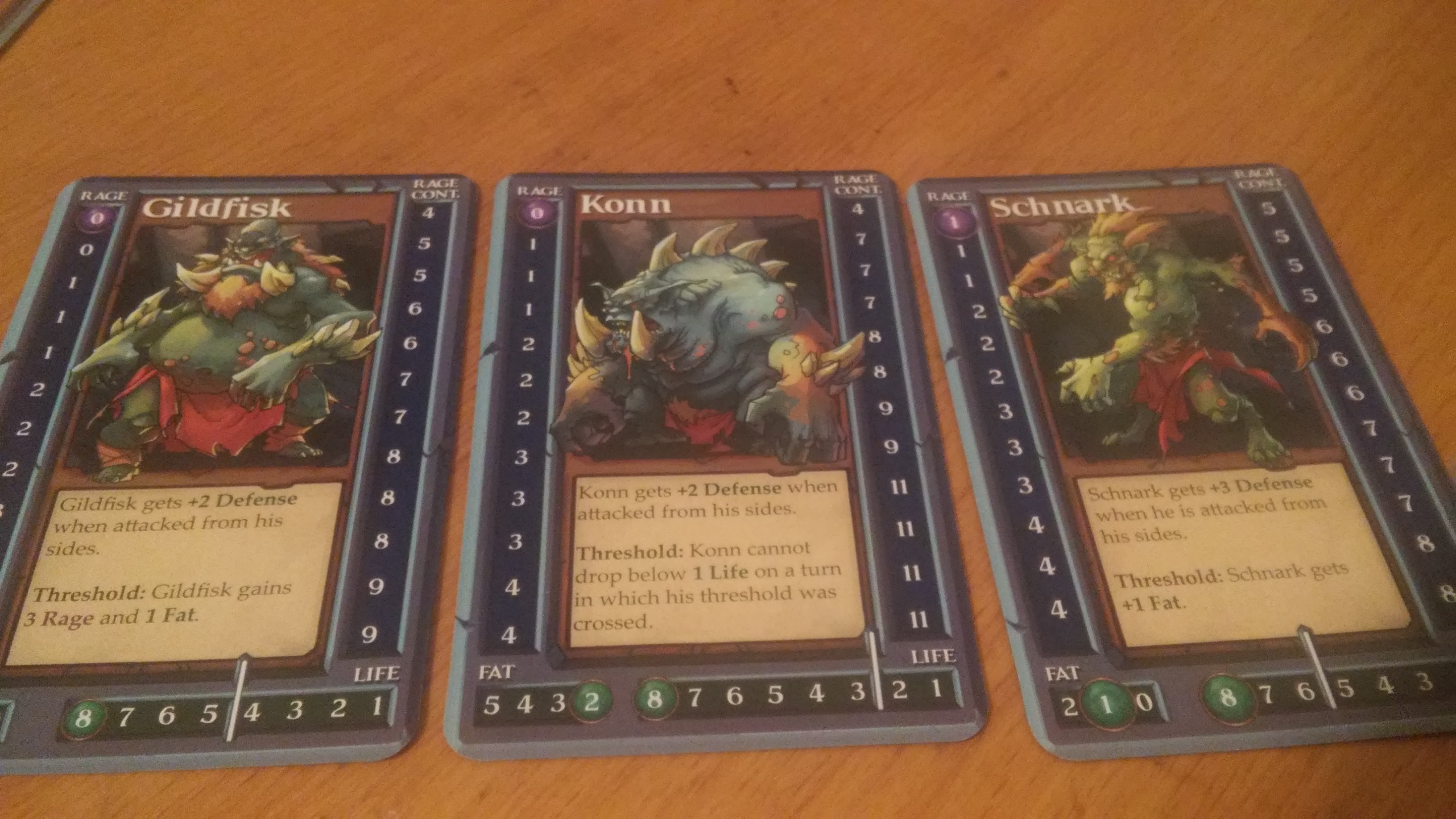 After generations of experimentation, battle, and horrific abominations before the eyes of God, the Shepherds of Woe must face their ancient foe once more. The Trolls have returned for revenge, and it will test the limits of your skills to defeat them. When fortune had me first stumble across Gruff: The Game of Mutated Battle Goats, I was already impressed. Its newest supplement, Rage of the Trolls, adds new dimensions to the experience over and beyond the newest game mode.

Rage of the Trolls wears many hats, or knotted clubs as the case may be, functioning as an expansion, new game mode, and standalone game all in one. If you have trepidation about getting into Gruff, there are enough resources within this small box to test it out, boasting the ability to construct two full decks, with plenty of customization options. The main draw is the implementation of a new solo/cooperative game mode whereby players, alone or with friends, may join together against AI controlled Trolls. While these touches are satisfying on their own, some of the best changes are the ways this expansion adds new options for players to supplement and test their playstyles.

Before you even get to the main draw (the intimidating and mighty Trolls), you will be able to sort through five new shepherds and six new Gruffs. These additions range across playstyles, from aggro to control and defense, with a smattering of direct damage mixed in, to give you new options if you have been trying to refine a deck. What made me most happy as I tried to arrange decks around these cards is the route that Rage didn’t take: there are always new keywords and rules that come with any card game expansion, but Rage’s new mechanics integrate right into Gruff’s gameplay rather than adding complexity on top. Circulate helps you find cards within your deck or reclaim mutations when they leave play. Fading triggers when cards go out of play, adding bonuses depending on the particular card. Each of these add gameplay opportunities, but without adding headaches to the game.

Shepherds also have some welcome changes, each one has something new to offer that will challenge you to consider how you use them. Doctor Acrid, for instance, may choose to shuffle three cards from his hand into his deck and redraw at the beginning of the game. You only get to do this once during the game, but for an aggro or combo deck it could give you a huge advantage right out the gate. Armiran lets you draw a card instead of taking a tactical action, and Baba Haga allows you to weaken your enemies when she is harmed. She does so by means of new Mutation tokens, which do one of two things: slow down your advance by preventing a Gruff from gaining a stat advancement, and fading once a Gruff would advance the first time. They can also increase a Gruff’s damage by one when it attacks.

Once you have a deck ready, it will be time to join up and face the Trolls themselves. These fiends work nearly identically to the rest of Gruff, so learning their rules will not take much time. Trolls have three stats: Fat, Rage, and Life. It is your goal to reduce their Life to zero, and their Fat is flat damage reduction. It might have been better if Fat were named differently, as it doesn’t function the same way for Gruffs as it does for Trolls, but the issue is minimized by the fact that you are only facing one Troll at a time. Rage, which increases every round, is both the damage a Troll unleashes when it attacks and the intensity of the battle as a whole. The more Rage coursing through a Troll, the more of its abilities it will use each round.

Trolls are controlled via unique decks of abilities. At the start of each round, the Troll will face the active player and draw a card from its ability deck, activating every ability that has a numerical value equal to or lesser than its Rage value. It acts according to its behavior, attacking and debuffing you in more powerful ways as the game progresses. You and your teammates will be attacking the Troll, needing to ramp up damage, keep your Gruffs alive, and decide where to strike. Trolls have differing levels of defense depending on whether you attack from the front or the side, so spacing is still core to this mode.

Trolls will also move around as they act, constantly keeping you on your toes and chaining with their abilities. I was concerned that the geometry of the game would be eliminated by the fact that you are facing a single enemy. However, because of the Trolls’ mobility and that attacking them from the side can have different effects than a head on maneuver. Rest assured, you will need to keep your units moving during Rage of the Trolls.

The cooperative mode is enjoyable on its own, and functions as a means to test your skill against distinct playstyles. Schnark is an aggressive Troll, striking quickly and representing the intensity of facing an aggro deck. Gildfisk is a mixture of defensive and offensive maneuvers, for a more balanced experience. The Immortal Kann represents typical control deck encounters. (The Kann-Troll, if you will.) He stays behind a firm wall of defense while building up towards a late game sweep. Each of them offers a distinct challenge, and helps to teach you to change up your strategy to pace yourself against different deck types.

The differences between solo and cooperative mode are minimal, but significant. One on one, you are testing the perfection of your own deck against a strong enemy. Together with a friend, you are able to take fewer turns but less of the Trolls’ damage. Your abilities will trigger on the beginning of the other player’s turn, and you can play cards on their turn if you have extra Crazy to spend. You will need to work together to coordinate your actions or you will lose against the might of the Trolls. The negotiations you go through during these games are satisfying and tense, but exacerbate a small issue that Gruff has always had: now you don’t only track Crazy you have spent on your own turn, but during the next two that will follow. You will have to find a way to track it on your own, because doing so in your head is a sure way to forget how many resources you have available.

The change is not one for one, of course, as it lacks the intellect and unpredictability of a human player. Because each enemy’s deck is randomized you will never play the same game twice, but there will come a time when you have mastered the experience. Getting there will be a challenge, though. These Trolls don’t pull their punches, and you are sure to rack up some losses as you play through this expansion.

Along with the typically high card quality and exemplary art, Rage of the Trolls has an updated rulebook that alleviates a lot of the confusion that the first version contained. With more examples and a slightly different structure, it’s now easier than ever to learn from and reference. There is one small issue, which is that Troll abilities are broken up by different color coding which doesn’t really make a difference as you play the game. While reading, it’s a confusing piece of information that seems very important but ends up being largely irrelevant. Given that the ability types are color coded, I imagine some people will be even less sure what’s going on.

Another problem is carried over from the original game: each Gruff is lavishly depicted on their cards, but only once. While sorting through their decks (or your hand) you will need to move slowly to make sure you are reading the correct card.

Now this does function as a completely standalone experience for those who want to get into the game without any investment. There is enough material here to build two full decks, with a decent amount of customization to go along with it.

Gruff: Rage of the Trolls

Rage of the Trolls marks a wonderful expansion to the Gruff line, as well as an entry point for new players. As a combination supplement to existing strategies, solo and cooperative game mode, and a standalone experience, it manages to pack an enormous punch in a small package. With humor, intelligence, and some elegant mechanics, Rage of the Trolls is absolutely worth your consideration.

John Farrell is a legal aid attorney specializing in domestic violence, living in West Chester Pennsylvania. You can listen to him travel the weird west as Carrie A. Nation in the Joker's Wild podcast at: https://jokerswildpodcast.weebly.com/
Related Articles: Gruff: Rage of the Trolls, Tabletop
Share
Tweet
Share
Submit