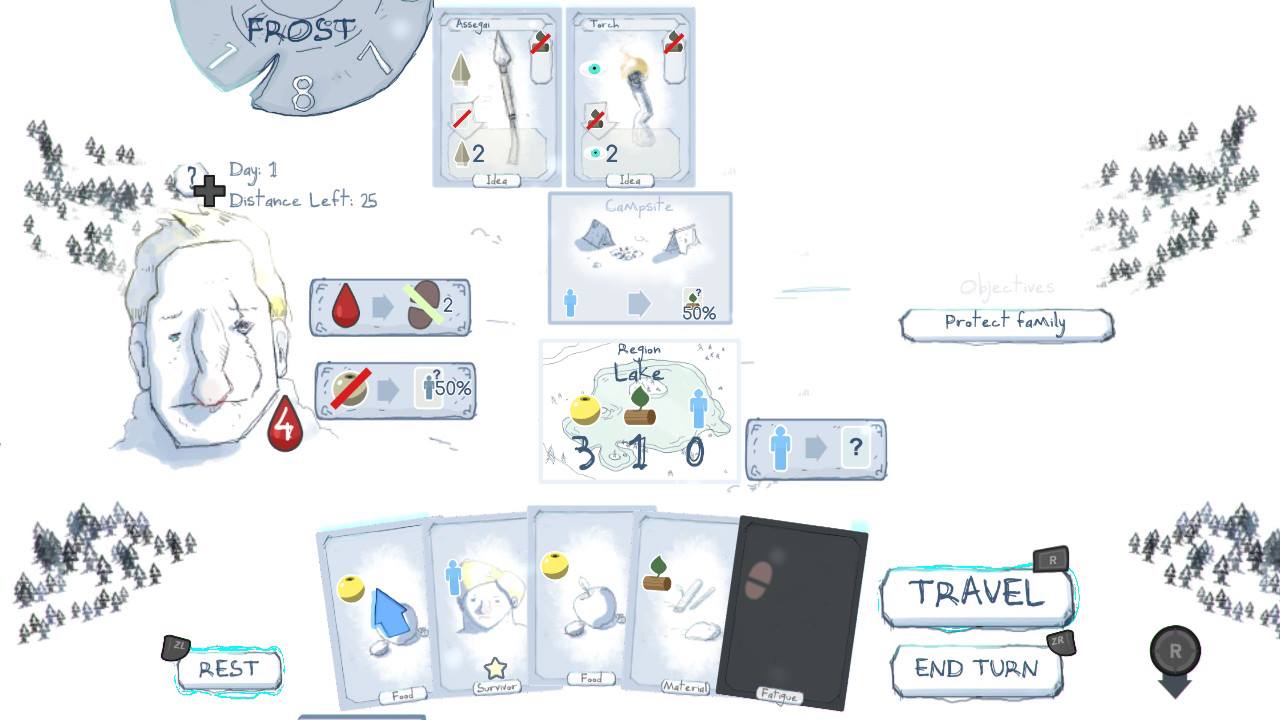 Frost is a single-player survival deck building game that tasks players to overcome the deathly frost that plagues a frozen tundra in which you are traveling in search of refuge as a nomadic tribe. Strategic skills are needed to outrun the Frost and complete your journey in this challenge for survival.

Frost opens up with a quick tutorial that at first seemed a bit confusing, but is actually pretty straight forward. The tutorial explains the rules of the game, breaks down the types of cards and obstacles you will face, and serves as a nice intro into the frozen world laid before you. After learning the basics you are free to enter the two playable modes, classic and scenarios, while also having the ability to jump back in to the tutorial at any time to refresh your memory on game mechanics.

Classic mode feels like more of a quick play mode, where you have limited resources and have to travel a set distance while trying not to run out of moves. Scenarios, on the other hand, play more like a story mode. When selecting scenarios, you are given an array of character classes including Hunter, Leader, Ranger, and more to unlock. Each class has its own story, skills, and objectives to follow and experience. The classes stories really drive the game further, not adding lore to the game, but adding a little more feeling and emotion to the task at hand.This is done in a short intro to the mode/class that reads like a children’s book. The Leader’s story is that he is a father and he must get his family to refuge; this class challenges the player to do such task but to make sure none of the family members die along the way.

The gameplay is simple to understand and pick up; you have a deck with a set number of cards that will help you on your journey. You must use the cards to meet criteria that is set by a region card that will allow you to travel and get closer to refuge, travel the set distance without losing all your health or outrun the frost and you win. The cards are broken into the categories of resources, weapons, ideas, dangers and regions. In your deck you will start out with three types of resources survivors, food, and, wood, but can add the additional categories of cards to your deck by sacrificing resources or meeting objectives. Frost does a great job at making no resource feel more important than the other, and challenges players to manage all of their resources wisely while thinking strategically. There is no limit to the amount of moves you can make in the game, but you have to keep an eye on the frost tracker, otherwise the game will end a lot quicker than you hoped. Essentially the frost will catch up to you by the tracker ticking down eight times after you end a turn, but if instead of ending your turn and you meet the region’s criteria allowing you to travel, the tracker will tick up giving you more moves to complete your journey.

There were instances where I was able to travel seamlessly from region to region without having the tracker drop below seven, but there were more times when I felt stuck and had to end my turn repeatedly due to my lack of resources to complete the regions goal. This is when I realized how challenging the game was, and caused me to really take my time and think about my next move. Even though this game is hard, no matter what difficulty you play on, there are still moments when it can be cruel and unforgiving. Some regions you enter can have ridiculous requirements to meet, forcing you to expend all of your resources and pretty much setting you up for failure in the next region. I remember cursing at the game after being short food resources, sending one of my survivor cards to look for more, only to have a card illustrated with a skull and blood pop up on the screen displaying the word death killing my survivor and striping me of a resource card.

One thing I should touch on is what happens after you complete a full journey and reach refuge. The journeys take a good amount of time to complete, are difficult, and can’t be rushed through. Upon reaching refuge and finishing classic mode you are rewarded with a few cards or the occasional scenario class, but to me this didn’t feel like a reward worth the time spent. Luckily when you complete a scenario, you can take that class and use it in classic mode utilizing the character’s abilities and unlock some extra cards as well. To me the rewards don’t feel all that great, but I did unlock some cards that helped me later on in the game and made me appreciate getting something for my time playing.

However, I loved the art style in Frost! The hand-drawn artwork is beautiful and fits the game nicely. The simple yet detailed line and watercolor art style works hand and hand with the soundtrack and overall theme of the game. The sound track selection may be scarce with what seemed like a total of three tracks. However, each track helps to set the tone of stressful survival and fear, compelling the overall gaming experience. A nomadic song made of different paced breathing and deep oms help to create an erie and unsettling feeling that makes this card game feel like a true test of survival.

Deck-Building games on the Switch are few and far between. Frost delivers a challenging experience that really makes you think, and feels like a true survival game. Hopefully Frost will open the door for more deck-building games to make it on to the console. If you are a fan of the deck-building genre, and want a game that really makes you think, then  you should definitely check out Frost.

Frost takes the deck-building and survival genres and mashes them together to create a truly challenging and strategic game. At times the game can feel unforgiving and overly hard, but requires players to actually think about their next move rather than rushing through a turn. The art style is beautiful ,and paired with an erie soundtrack creates an unsettling and true survival feeling.

From Southern New Jersey, Shaun has always been a huge fan of video games as well as nerd, geek, and pop culture. No matter the topic of conversation, Shaun can always find a way to slip in a movie or TV quote to get a laugh. When he is not playing games or watching shows, Shaun works as a substitute teacher during the day and as a bartender at a local brewery on nights and weekends.
Related Articles: Frost
Share
Tweet
Share
Submit