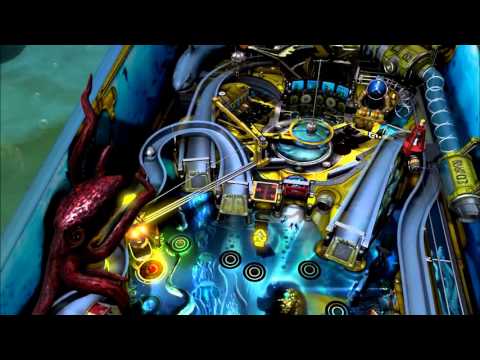 Zen Studios has made it their business to create the perfect pinball experience. They have over 70 pinball tables, including licensed properties like Star Wars, Aliens, The Walking Dead, South Park, and Marvel. With their tried and true formula locked in, they’ve seen fit to try something completely new — Virtual Reality pinball.

Pinball FX2 VR is by all accounts, pinball that you are likely used to if you’ve played any of the previous table releases. Each table comes alive with more moving pieces than you’d see in any real-world table. They are also host to more secrets than you might imagine. Included in every table are embedded minigames that transform the landscape, unleash multi-ball moments, and trigger all sorts of cool animations. In Wild West Rampage, you can shoot a ramp and zip through the saloon doors of the old time frontier town. Hitting other objectives causes a six-shooter cylinder to rise from the center of the table. You can load it up with six pinballs for a multiball situation that is absolutely bananas. Discovering all of these table moments is half the fun of pinball, and Pinball FX2 VR nails this very well.

At launch, Pinball FX2 VR lands with Wild West Rampage, Castle Storm, Earth Defense, Paranormal, Mars, Epic Quest, Secrets of the Deep, and Biolab as the first “season” of the game. Also available is The Walking Dead table as the first DLC for the game. While we are still miles away from that 70+ table mark, when you fire up any of these tables, it’s easy to see why.

Pinball FX2 VR takes place in a Tony Stark-esque circular beach flat. Scattered around the large room are four tables (you can swap them out at will), a trophy case, and a big screen TV that acts as your control panel. As you select the table, a short loading screen pops up, which then completely immerses you in the experience. As an example, the Wild West Rampage has a train that circles around you, tooting its horn. Off to the right, the female character from the backbox (the part where your score, the title, and artwork is typically displayed) stands nearby, spinning her six shooters. In Paranormal, all sorts of chaos goes on around the table. A loch ness monster peeks its head out, a hand grabs a nearby plane and flings it at you, and a floating Ouija board tries to communicate with the player. Earth Defense has an ongoing battle occurring over the top of the glass between stereotypical flying saucers and a set of Apache helicopters. Castle Storm has a small dragon on the table, but a more lively one flies around you, dodging projectiles from the crossbow mounted to the back of the backbox.

The two tables that really stuck out for me were Secrets of the Deep and The Walking Dead. Secrets of the Deep plunges you under water. As you stand in front of the table, jellyfish bob along as schools of small fish skitter by. However, it were the grey dead-eyed killing machines that had my attention. Every time a shark began to swim my direction my attention shifts from the table to the giant gliding monster moving towards me. Thankfully, they only seem to eat silver pinballs.

The shark is a little unnerving in VR.

The Walking Dead’s table features voice actors from Telltale’s ongoing series. A young Clementine leans against the pillar by the table as a decaying zombie groans and waves furiously across the glass. The inclusion of the adventure game’s voice talent lends a lot of credibility to the whole product. The table also features a chapter progression system as you uncover the secrets of the board. It almost feels like I’m playing the actual Telltale game, which is a nice touch.

If there is one thing that I really enjoyed about Pinball FX2 VR, it’s that it is highly intuitive. If you want a closer look at a table, simply lean over a bit. The triggers handle all of your flipper work. You see, Pinball FX2 VR is meant to be played from a standing position, just like a real pinball table. Unfortunately, it also means that you’ll be cranking your head to look down at the table, especially when the ball heads for the drain. Thankfully, playing from the seated position works just as well after a quick press of the options button to re-orient. The only downside is that this position requires almost as much downward angle on your neck.

I was surprised at just how much I enjoyed the additional immersion of Pinball FX2 VR. It’s completely nausea free, and it looks fantastic to boot. While the neck angle required to work the table is a little uncomfortable, Pinball FX2 VR is a great new way to experience the amazing work of Zen Studios and their pinball tables.

Ron Burke is the Editor in Chief for Gaming Trend. Currently living in Fort Worth, Texas, Ron is an old-school gamer who enjoys CRPGs, action/adventure, platformers, music games, and has recently gotten into tabletop gaming. Ron is also a fourth degree black belt, with a Master's rank in Matsumura Seito Shōrin-ryū, Moo Duk Kwan Tang Soo Do, Universal Tang Soo Do Alliance, and International Tang Soo Do Federation. He also holds ranks in several other styles in his search to be a well-rounded fighter. Ron has been married to Gaming Trend Editor, Laura Burke, for 21 years. They have three dogs - Pazuzu (Irish Terrier), Atë, and Calliope (both Australian Kelpie/Pit Bull mixes).
Related Articles: Pinball FX2 VR, VR
Share
Tweet
Share
Submit