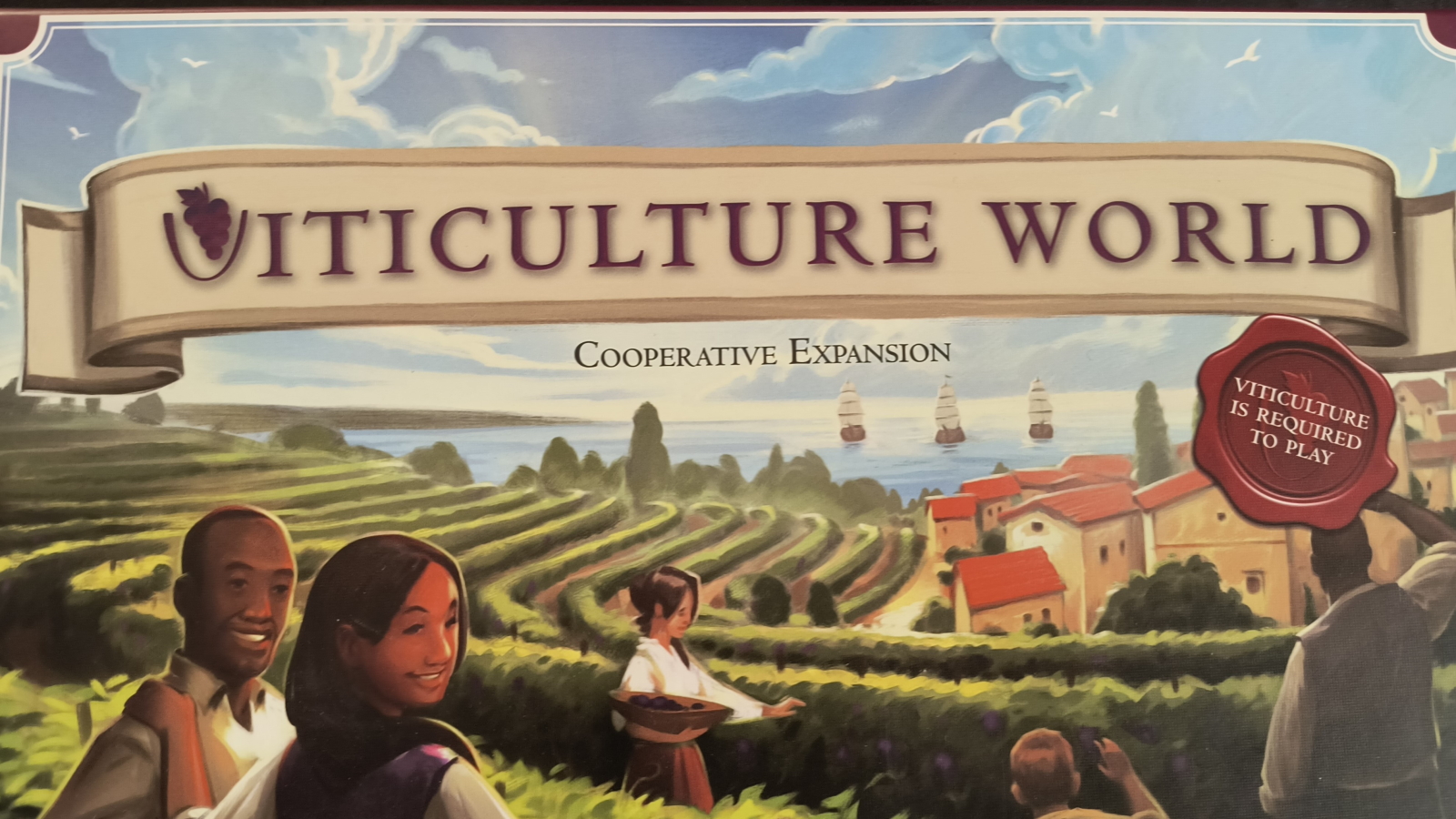 Wine is enjoyed across the entire world, though those disparate cultures’ relationship with wine is very different. Viticulture: World is dedicated to exploring how wine impacts different parts of the world, and how those differences impact how that wine is made.

Viticulture World is a co-operative expansion to Viticulture.  Much like Viticulture, it plays between 1-6 players. This expansion comes with a single player version along with an automated partner. The basic mechanics of Viticulture are completely intact.  It’s still a tight-rope walk of a worker placement game split into multiple seasons.  If you want to brush up on those basics, then check out our review of Viticulture.  I want to talk about the new stuff! 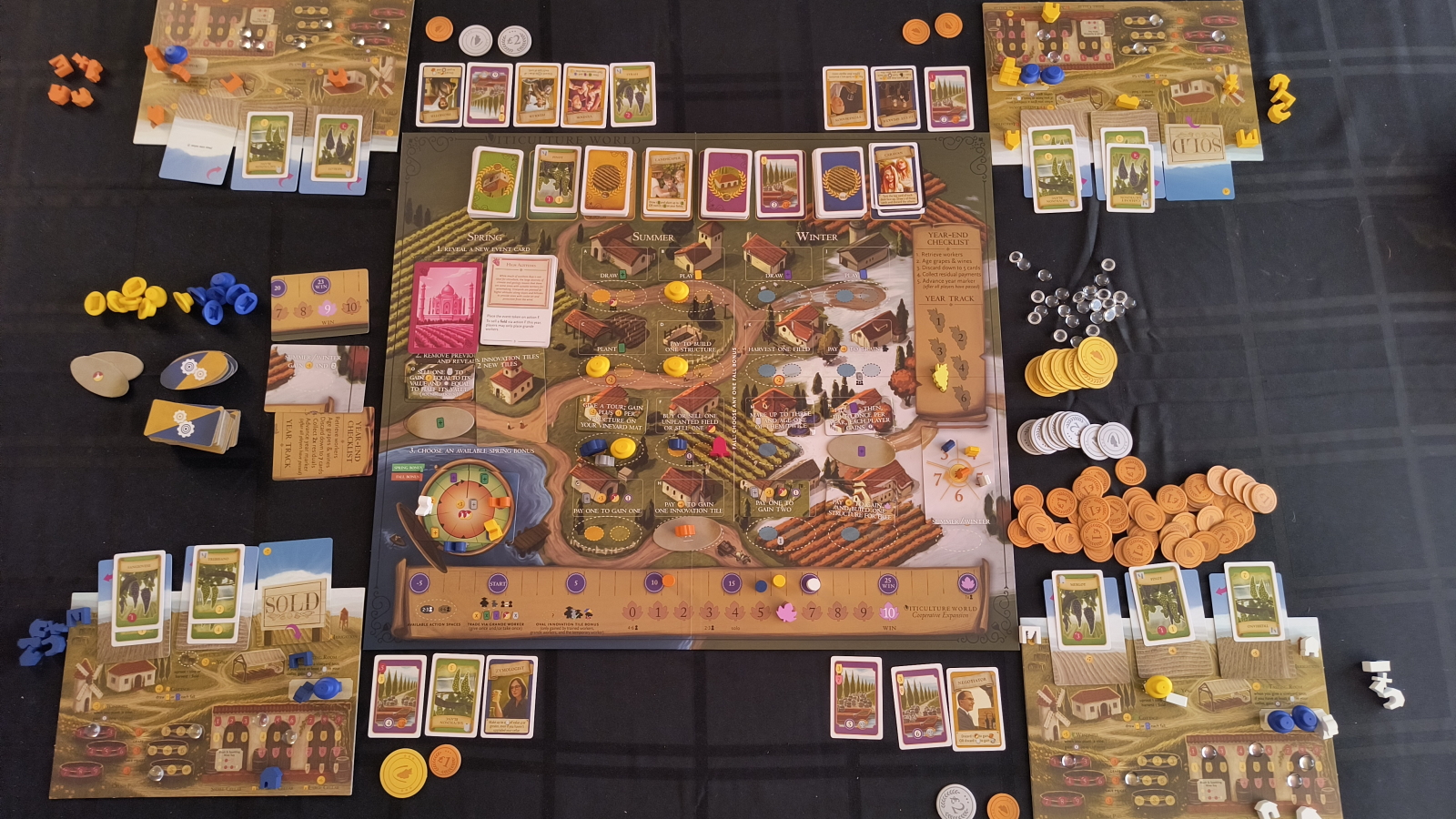 So first and foremost, the victory conditions have changed. The biggest change is a hard turn limit.  At the end of 6 turns, you win or lose.  To win, you need to both make sure all players have at least 25 victory points, and the players together need to reach the right number of influence points, a kind of team-work objective.  On the one hand, the time a game might take is pretty well set in stone, but on the other, there is no way to try to extend the game one more turn to complete objectives (such as in Pandemic).

The expansion comes with a new board that is split into summer and winter, just like the original game. The game also includes tiny rubber hats for your workers in yellow and blue varieties.  These cute hats designate whether that worker is allowed to work in summer or winter.  Players start with two of each, but can train their workers to remove the hat, allowing them to be placed in either season.

Another new mechanic is board improvements.  One of the new spaces on the co-op board is an improvement space.  It’s an expensive option, costing 6 lira to start, but it permanently upgrades a space on the board for the entire team.  The upgrades are split between allowing any number of workers to be placed on a single space (along with extra bonuses for trained workers) and very powerful upgrades for the buildings themselves. Upgrading is extremely important for success, with some upgrades even opening new avenues for victory.  However, due to how expensive upgrades are (starting at 6 each) it can completely stall out a player that goes for it, meaning they might not reach their 25 victory point goal. 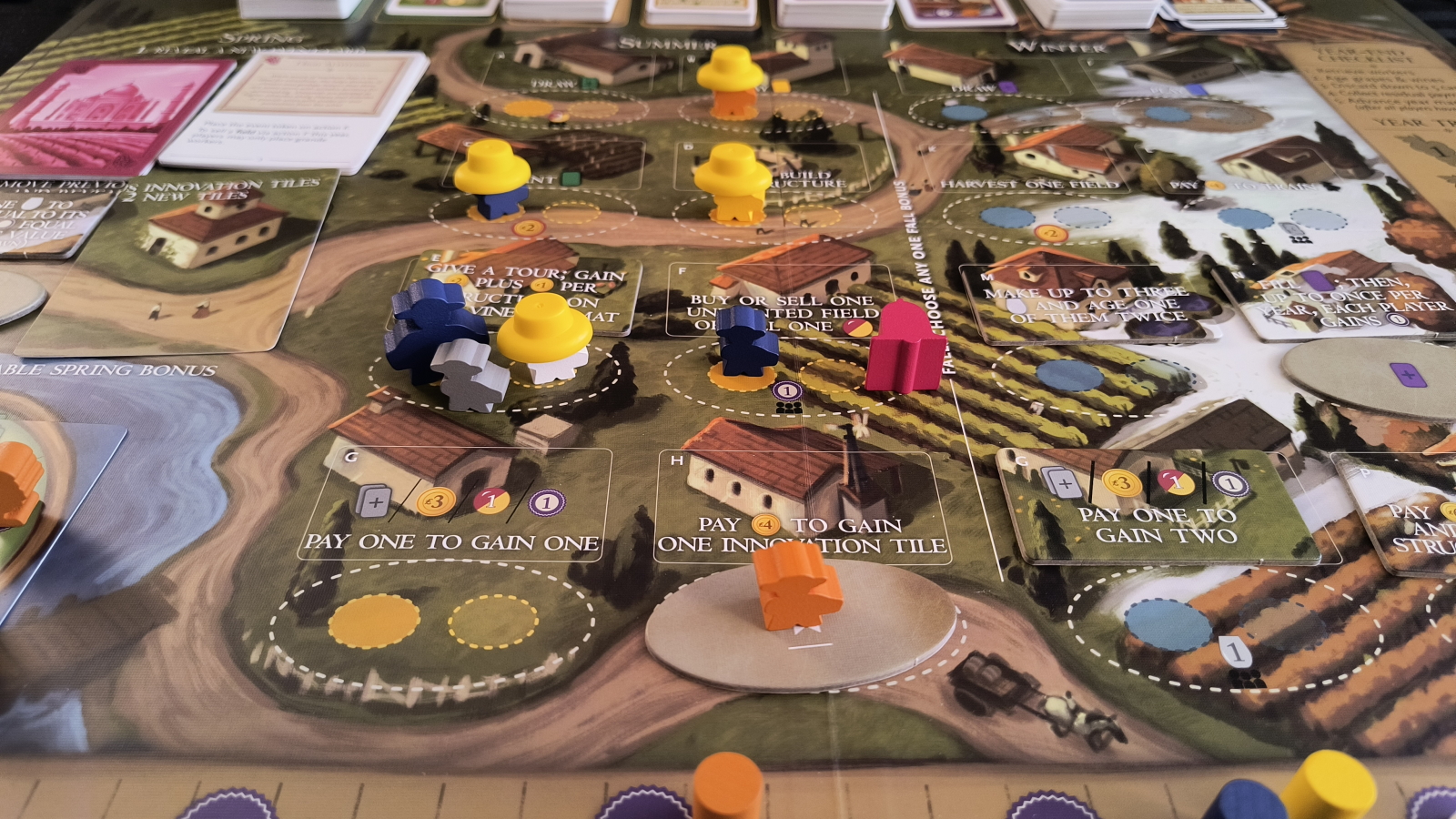 Finally, my personal favorite part of Viticulture: World are the scenarios.  There are 7 scenarios in all, 1 for each continent (besides Antarctica) and one tutorial scenario that is a crossover with Stonemeier’s Charterstone.  Each scenario adds interesting and unique mechanics, as well as a difficulty curve.  They each come with a deck of event cards and other cards supporting their specific mechanics.  These new mechanics are very cool in how they represent different cultures, such as Australia having a mechanic to share knowledge with other players, or Asia changing base parts of the board such as the turn order tracker and the end of turn steps.  How tightly these follow the history of winemaking is not something I know enough to comment on, but certainly makes sense in the framing provided by the cards.

As always, the artistry of Viticulture is beautiful, with each new scenario bringing in new art and lovely blurbs about each continent’s relationship to the wine at the heart of Viticulture.  In addition, the little hats are a cute mechanic, even if they have a tendency to fall off your workers.

Now, to be honest, I do have concerns about the difficulty of the game.  As with most co-op games, Viticulture: World is hard.  6 turns is a really short time to get a proper wine setup in the competitive version, and even worse when you take into account the money sinks of upgrading and buying influence. Personally, it would be nice to have multiple turn counter options for increasing or decreasing difficulty further.  I didn’t even come close to winning on the tutorial game, and it took several tries to win my first game. I feel like a cooperative version of Viticulture would have been a great way to introduce people to the game instead of being an even more difficult version. 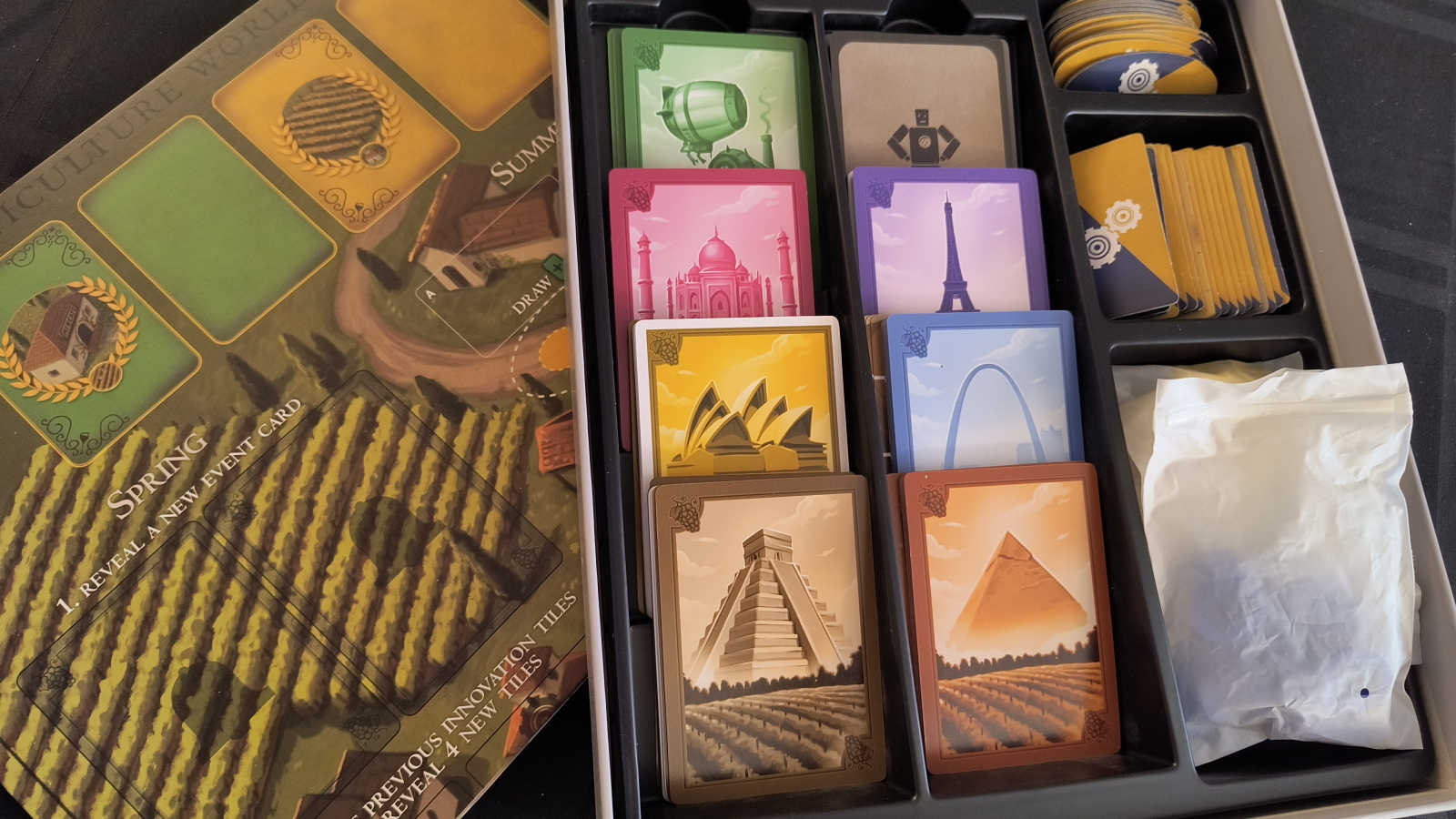 There are also concerns that are present in the base game as well.  It is possible, for example, to play the game without interacting with wine making at all.  In fact, on my most recent victory, I did exactly that, selling all of my fields and never planting a single grape or expanding my wine warehouse at all.  My vineyard was based around a single bit of wine I got from another visitor, giving tours for victory points.  This was made even easier by the improvements made to the board, granting every player points whenever I gave those tours.  While it’s interesting to break the game in such a way, I can’t help but feel like I’m working around the intended mechanics, instead of meeting the game on its own level.

Overall, I still enjoy Viticulture, but the base mechanics of the cooperative version make me more stressed in the game, and enjoy it less. I feel like if you’re competing and it’s less stressful than the cooperative version, there’s something off about the game.  However, the 7 unique scenarios definitely breathe new life into the game.

An adequate cooperative version of a classic game. The hefty difficulty curve makes it hard to recommend for conflict-averse players, but wine connoisseurs will definitely enjoy their brief visits across the world. Pros of the original game will definitely find new challenges here.