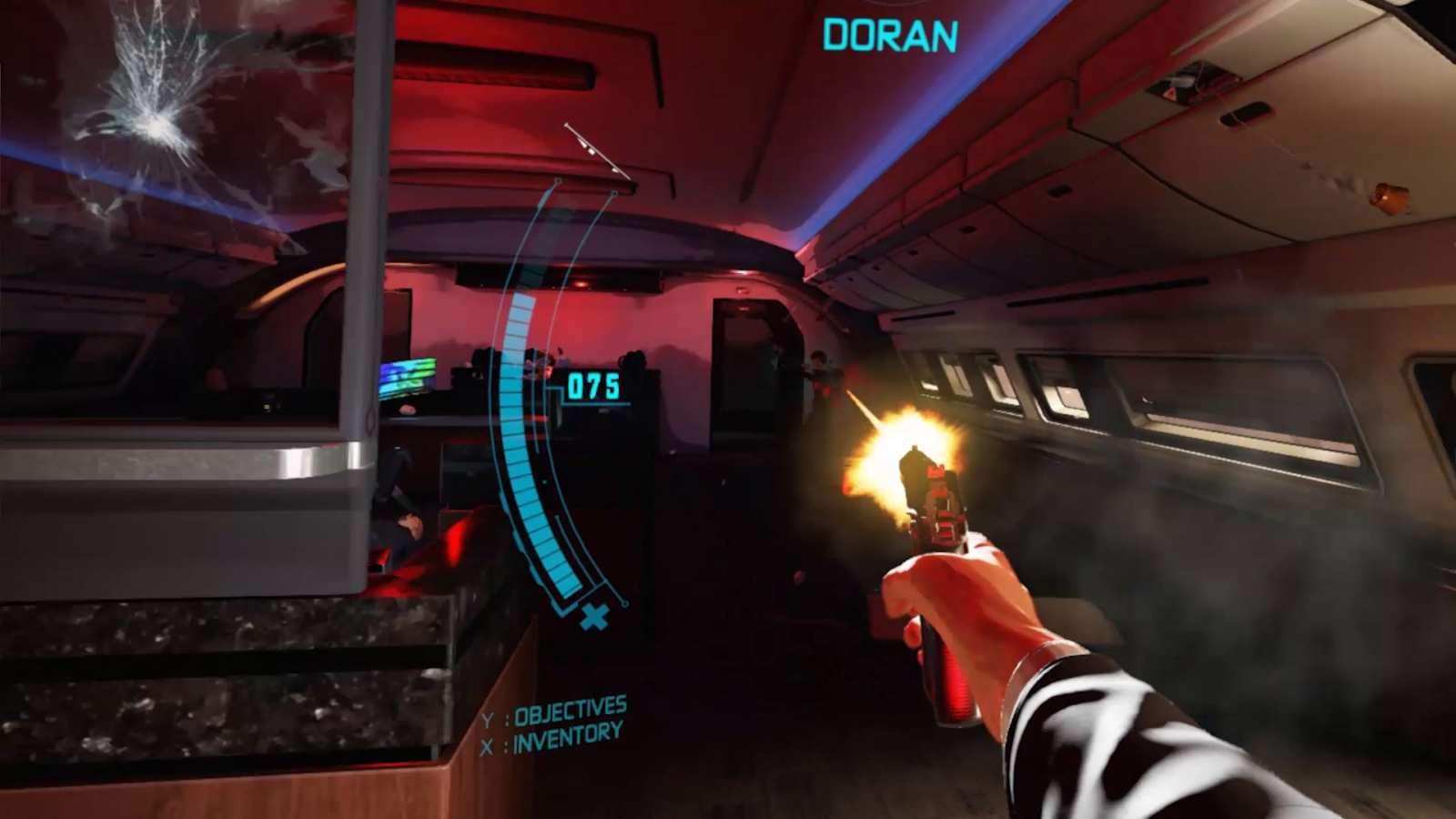 There’s a reason we keep going to watch Tom Cruise pretend to be a superspy in the Mission Impossible flicks. Sure, there’s plenty of action, but it’s the gadgets, the intrigue, the hand-to-hand combat, and the storyline twists that draw you in. Defector from Twisted Pixel and Oculus Studios looks to recreate that power fantasy in virtual reality by putting the players into the well-tailored suit of a super spy on a mission to retrieve stolen tech from shady arms dealers. Lock and load, and let’s see where this fan service takes us.

Without too many spoilers, the story begins en medias res, with the player being debriefed after having completed their missions, with their motivations, methods, and choices being questioned after the fact. It’s a similar technique as was used in games like Blood & Truth on PSVR, letting the story unfold chapter by chapter with limited exposition in between.

The player begins on a plane about to meet with a world-famous arms dealer who has information about the missing bits of tech. Popping into the restroom, you’ll drop in an earpiece and special contact lens that will link you up with your handler, Dorian. With your link in place, it’s time for some interrogation, gunplay, puzzle work, and a few choices that’ll make you want to play this mission twice. If you’d like to see one of the two options, check out the video below:

As you can see, Twisted Pixel is combining the best parts of VR titles, offering up hand-to-hand combat, shooting around corners, gadgets, exploration, and an RPG-lite conversation system to build the power fantasy that you are an unstoppable super spy. Like James Bond, you’ll be able to tackle these scenarios in a handful of ways, be it hand-to-hand, behind the trigger, or with a gadget or two. With the exception of the second level (more on that later), every moment of Defector is straight out of an action movie montage, delivering far more immersive action than the $20 price tag might suggest.

Graphically, Defector is a mixed bag, but the needle falls more on the positive side than negative. Running on Ultra settings on a 2080 Ti, Defector is a mixture of excellent motion capture, very detailed textures and character models, and entirely too many jagged edges and motion blur. Your contact lens has a special ‘scan’ mode that lets you see important objects, and for whatever reason, reveals the jagged edges far more clearly. On the other hand, character faces are incredibly detailed, especially the mouth work. Overall, Twisted Pixel has done a great job of making a believable world, and it’s nothing that a little supersampling on an overpowered video card can’t fix. 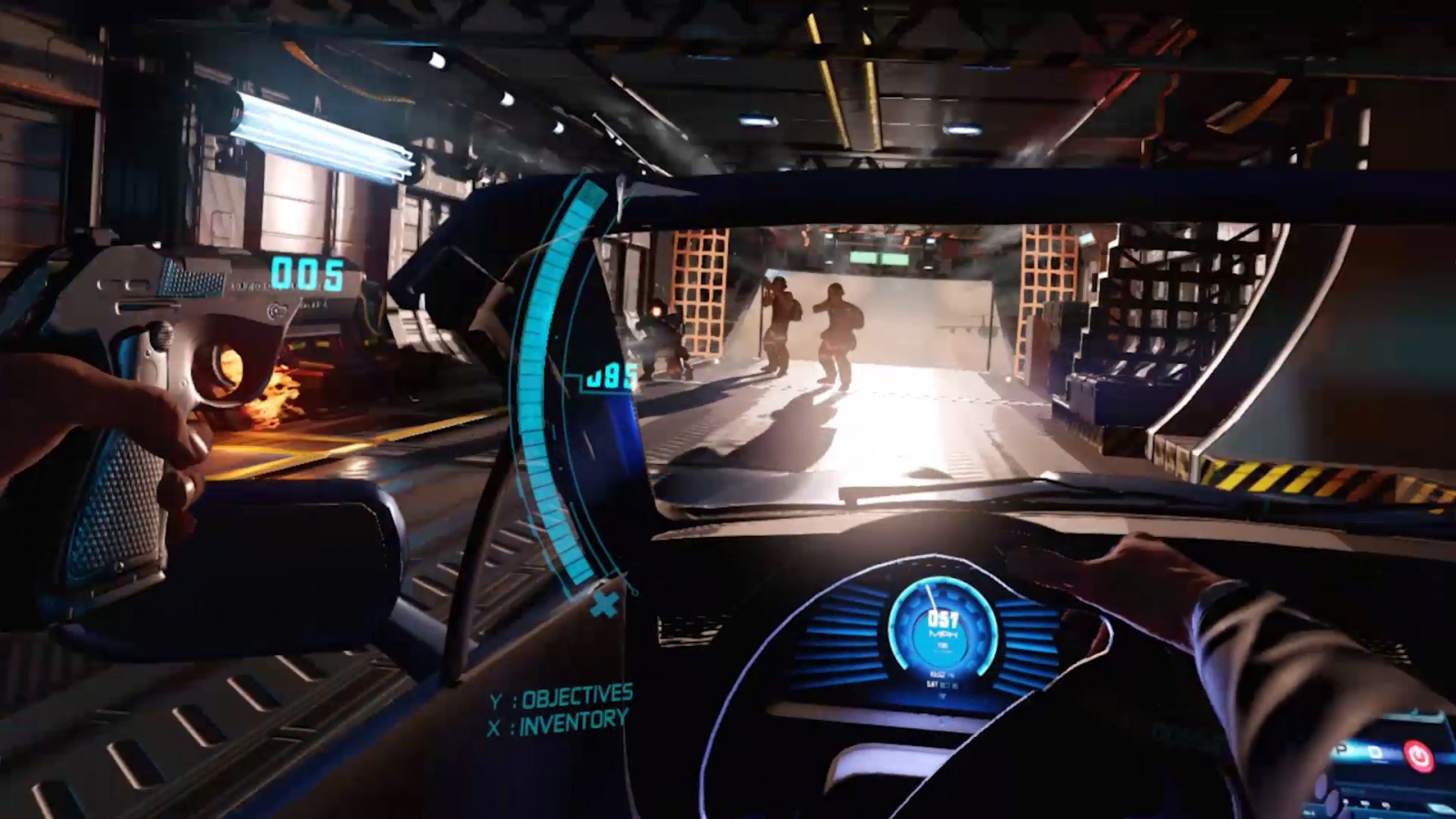 For those of you who suffer from motion sickness like I do, you’ll appreciate that Defector has a raft of solid options to help you stave off nausea. Tunnel Mode provides a constricting effect like we’ve seen in games like Eagle Flight; you can adjust your field of view, how fast you turn (or use snap turns), how fast you move, and much more. Tinkering with these can help, but I was able to roll with the defaults without too many issues, just taking a short break every hour. Similarly, if you are concerned with how much movement you’ll need, don’t be — you can play Defector in an entirely stationary fashion.

The shooting in Defector is actually pretty solid. Pistols and rifles have the proper punch, and gadgets like a glove that electrifies anyone you punch come in handy. Enemies aren’t in a hurry to engage you, instead seeking cover and firing from there, so it’s the sort of pop-up action you might find in an arcade shooter like Time Crisis. It’s good fun, and doing it in VR makes it that much better. 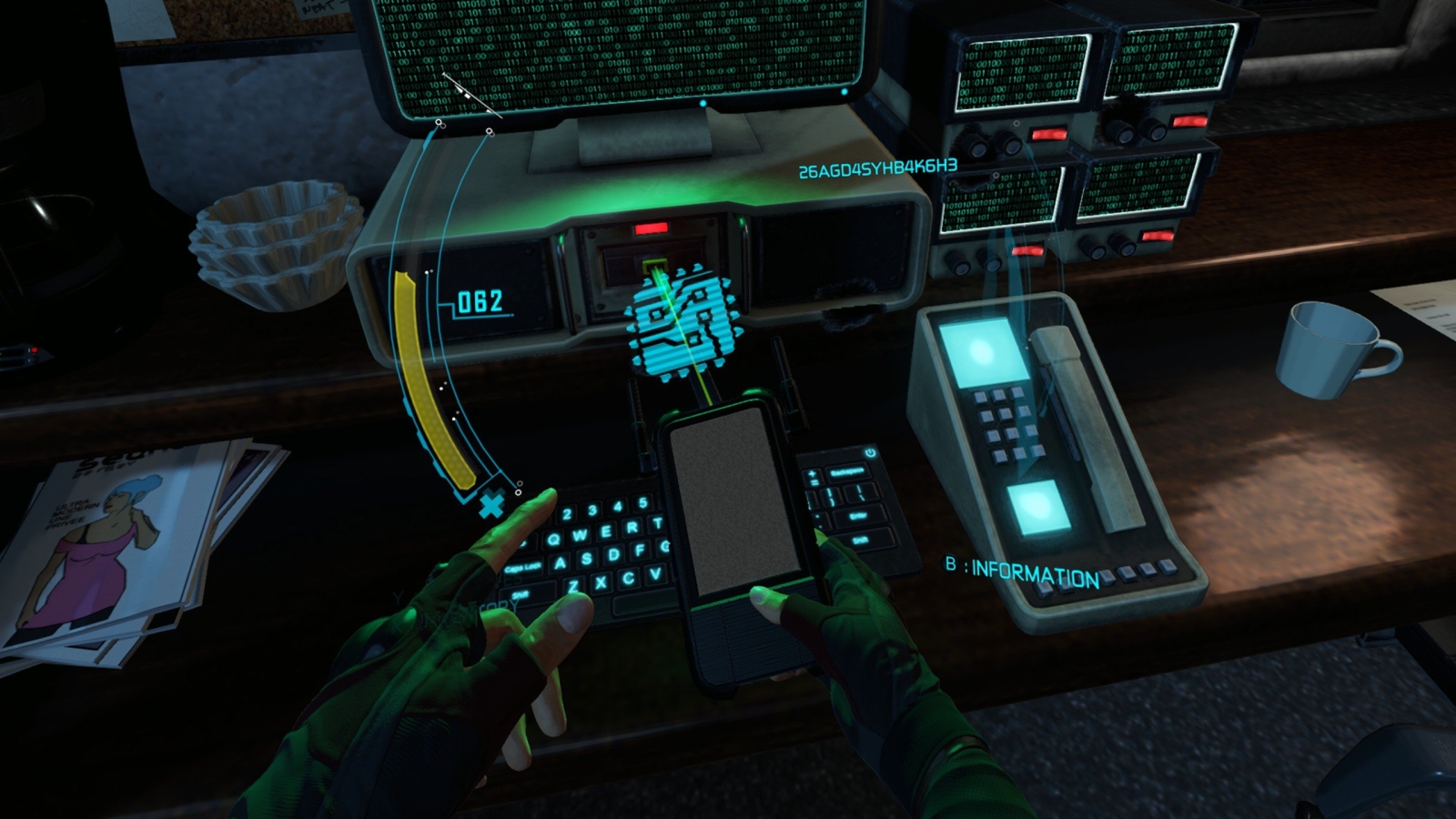 Time to do some superspy stuff.

Overall, there are a total of five missions in Defector, all of which take about an hour a piece. They also feature a choice in each that provides a branching point in the plot, culminating in two very different endings and a handful of varied dialogue options. If you replayed the entire game twice it’d take you 10 hours (I’m pretty sure you could figure that part out on your own), but you can also avail yourself of the “Quickplay” option. Quickplay lets you jump into the mission at the point where you made your critical path choice, letting you see where the other choice would lead you. This cuts the whole affair down to roughly seven or eight hours to experience the whole adventure and tackle any secondary objectives you may have missed.

If I had one complaint with Defector, it’s that it should be twice as long. I don’t mean that in the “VR games need to be longer experiences” sort of way, but more that the story never feels like it has enough time to breathe. All of the missions are great, but they all feel like they are stand-alone with little connectivity between them beyond your handler, Dorian. As a result, you are always meeting a new cast of characters in each mission, and before they have time to settle into their positions, you are off to the next locale. It makes the worldbuilding feel like each area was created in a vacuum, making it hard to connect with the heroes and antagonists.

Beyond that general complaint, we need to talk about the second level in the game. I’m going to spell out a specific “puzzle” (air quotes as it’s just arbitrary nonsense) whereby you need money to gamble your way into some specific objects. You can see some of that gambling below, but getting the coins to do so (What superspy shows up with no money!?) means robbing a blind musician. Looking at your dossier lets you see that the nearby guy will often tip a great performance. With that information you can stand here until the stars burn out and he won’t drop a single coin in the basket. You need to make your way downstairs to the gambling den, sit down at the game, get Dorian’s “wisdom” that you’ll need money, then go back and do absolutely nothing. At this point the NPCs will cough up the goods and you can get back to business. Arbitrary triggers are annoying and reminiscent of the “logic puzzles” that make no sense in point and click adventures, but thankfully I didn’t encounter any hiccups like this in the rest of the game.

Defector represents some of the best interactive elements in VR, with combat, gunplay, spycraft, and a little bit of puzzle work. While the wheels occasionally fall off on that puzzle aspect, and the story does feel a bit truncated, the ride is a blast while it lasts.

Ron Burke is the Editor in Chief for Gaming Trend. Currently living in Fort Worth, Texas, Ron is an old-school gamer who enjoys CRPGs, action/adventure, platformers, music games, and has recently gotten into tabletop gaming. Ron is also a fourth degree black belt, with a Master's rank in Matsumura Seito Shōrin-ryū, Moo Duk Kwan Tang Soo Do, Universal Tang Soo Do Alliance, and International Tang Soo Do Federation. He also holds ranks in several other styles in his search to be a well-rounded fighter. Ron has been married to Gaming Trend Editor, Laura Burke, for 21 years. They have three dogs - Pazuzu (Irish Terrier), Atë, and Calliope (both Australian Kelpie/Pit Bull mixes).
Related Articles: Defector, Let's Play, VR
Share
Tweet
Share
Submit