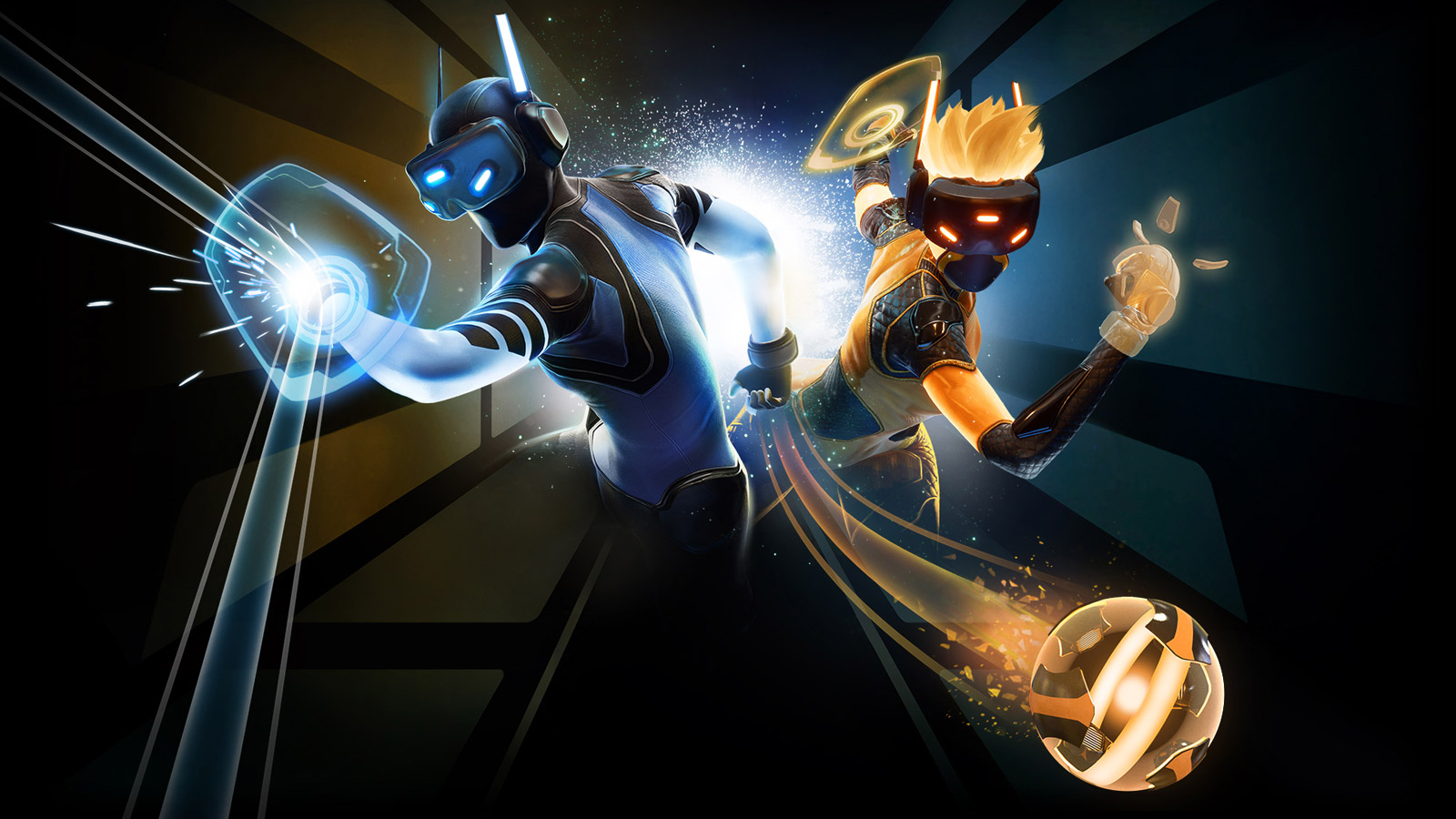 I’m sore and tired. My shoulders on both arms hurt, and I couldn’t be happier about it. Sparc, the latest game from CCP Games, the creators of EVE Online, EVE Valkyrie, and the sadly-canceled World of Darkness MMO, is what would happen if there was a TRON version of Racquetball. If your eyebrows are raised at that thought, read on…

Sparc is, at its core, a game of two-handed full-room racquetball. An orb pops up from the floor, and using throwing motions, you’ll lob the ball at your opponent. They can, using the basic rules, deflect it with their knuckles. At the same time, your opponent will also be throwing their ball. If you catch your ball on its return, you can turn it into a shield which will allow you to deflect the ball of your opponent. The room you are in is square, allowing you to bounce the ball off of any surface, creating some wicked angles. Ducking, bashing or punching the enemy ball, dodging, and twisting your body results in the same motions in the VR world, making this the best VR workout I’ve ever had. Music-punching VR games have nothing on this.

This game is crazy active!

There are some baseball-esque rules and additional modes to shake things up. The more advanced mode turns off the aforementioned punch knuckles, and your otherwise infinite use shield breaks and has to recharge after being struck. This puts a far greater emphasis on physically dodging. This advanced mode also turns the long rectangular arena 45 degrees, making it more of a diamond shape, creating new angles to bounce the ball. These baseball rules take more effect during dodging, as striking the wall directly behind your avatar yields a “strike”. Three strikes and it puts one point in the score column for your opponent, just the same as if you were struck with the ball. Additionally, you can tweak timers, score, and aim assists if you want to shake up the challenge a bit.

The real turning point for Sparc came when I realized that I could curve the ball. Similarly, lobbing an overhand shot as hard as you can, or chucking it underhand has a dramatic effect on the speed of the ball. If all of this sounds like it’ll wear you out, you are absolutely right, but this physical skill-based combat is the flat-out fantastic. Best of all, as you are moving in a very limited space, there is no chance of nausea.

CCP has done a fantastic job with character creation. There are a ton of options available to make your character your own. Different body suits, masks, helmets, color options, hair, and face options let you create a character that is relatively unique, and certainly more than most VR games provide.

Graphically, it comes as no surprise that this game is gorgeous. EVE Valkyrie is a benchmark for a lot of VR games, and the team continued that excellence here. While the environment is nowhere near as jam packed with detail as their other titles, the simple and clean lines and interface work perfectly with the aesthetic CCP is trying to create.

As my wife and I played the game, I was surprised at just how clean the PlayStation 4 PSVR version of the game looked. Without placing them side by side, it’s very difficult to tell the difference. In motion, they are all but identical.

I have few complaints with Sparc, and that’s a testament to just how well the core elements of the game are. There is a persistent bug where disembodied torsos will float in mid air in front of your opponent, whether in the arena or outside of it in observer mode. Similarly, when you have three or four people in the game, the avatars will get mixed up. I saw this when my opponent, clearly male, was suddenly clad in female armor with bright pink electric braids — the avatar my wife had chosen on PSVR. These cosmetic bugs are pretty minor, and should get ironed out pretty quickly.

Another issue with Sparc comes from cross-play. While the game supports play with HTC Vive, Oculus Rift, and PSVR, only the two former are easy to set up. As Vive and Rift can access Steam (a common connection point), inviting friends is business as usual. Unfortunately, without that same common connection, it’s impossible to invite friends from Sony’s platform. Comparatively, games like Star Trek: Bridge Crew had Ubisoft’s UPlay service as middleware. Instead, what you have to do in Sparc is join a game, quit, join, quit, join, quit, and join until you eventually happen to land in the same lobby as your friend. It’s a nuisance to be sure, but unless CCP suddenly develops some middleware (something they’ve stated they won’t likely be doing due to their sadly exiting the VR space) you are stuck with this try, try again method to play with your console friends.

My final complaint, and it’s the largest of them, is that this fantastic base needs more content. Additional arenas, new gameplay tweaks, single-player AI, and built-in competitive brackets, or just being able to bounce between novice and advanced mode without going all the way back to the main menu would extend this already-fantastic game dramatically. With CCP’s recent abandonment of the VR space, however, all of that seems unlikely. This is made even more unfortunate by the fact that this is one of CCP’s best and most accessible games to date.

This is the coolest lobby I’ve ever seen in VR.

I have to take a moment and call out a huge advantage Sparc has over any multiplayer game I’ve played in the last ten years. This game has, arguably, the best player base I’ve run into. Every person we played with was complimentary, offered tips to improve, didn’t harass my wife, and were genuinely nice. Nobody gave us grief for being newbs, there was very little swearing, and nobody made bold insinuations about my mom.

Sparc is what would happen if racquetball existed in the world of TRON. With extensive customization, a handful of modes, and frantic well-executed gameplay, the only thing holding this game back is CCP’s recent push away from the VR table. This is doubly unfortunate as what’s here is a fantastic platform on which to build.

Ron Burke is the Editor in Chief for Gaming Trend. Currently living in Fort Worth, Texas, Ron is an old-school gamer who enjoys CRPGs, action/adventure, platformers, music games, and has recently gotten into tabletop gaming. Ron is also a fourth degree black belt, with a Master's rank in Matsumura Seito Shōrin-ryū, Moo Duk Kwan Tang Soo Do, Universal Tang Soo Do Alliance, and International Tang Soo Do Federation. He also holds ranks in several other styles in his search to be a well-rounded fighter. Ron has been married to Gaming Trend Editor, Laura Burke, for 21 years. They have three dogs - Pazuzu (Irish Terrier), Atë, and Calliope (both Australian Kelpie/Pit Bull mixes).
Related Articles: Sparc, VR
Share
Tweet
Share
Submit