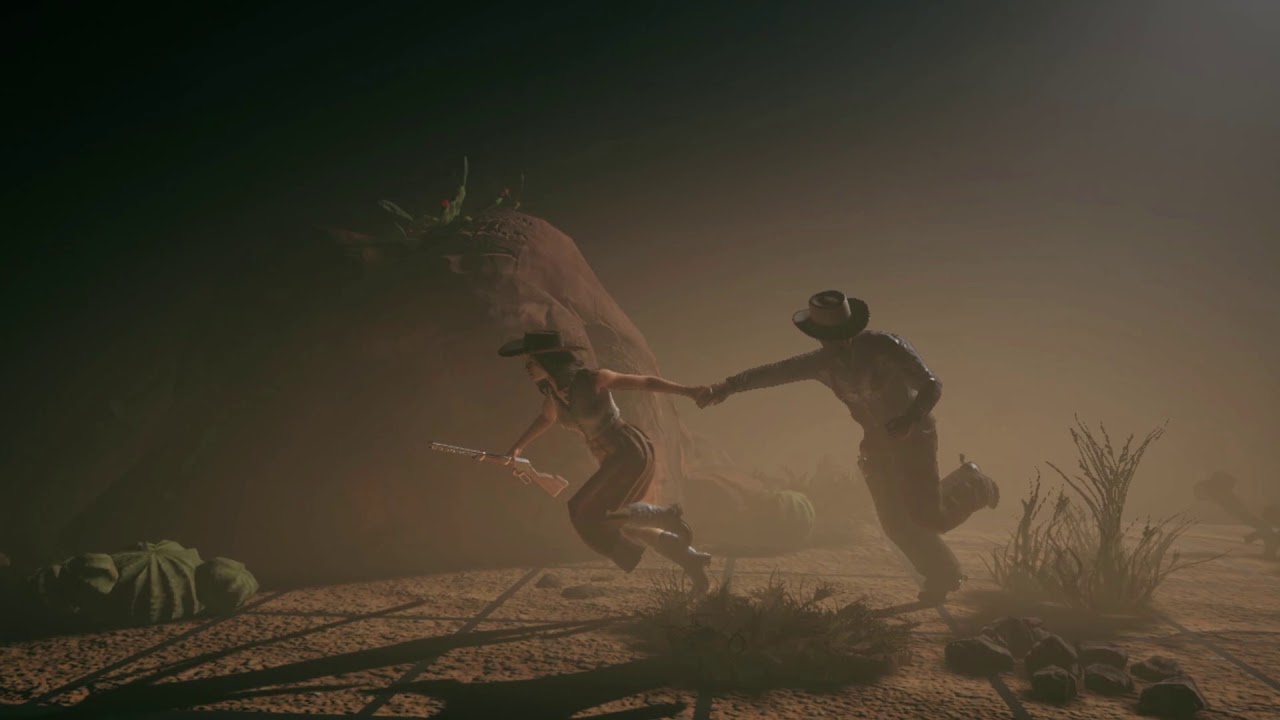 The original Westworld was an exercise in the consequences of indulging your basest instincts, how that can change a person, and the dangers of what happens when the robots decide to revolt. HBO’s revival takes a different approach, humanizing the robots by showing viewers a disturbing peek behind the curtain. What happens to your human-like psyche when you become aware that you are being murdered for fun on a near daily basis?

VR veterans Survios of Electronauts, Sprint Vector (review), Creed: Rise to Glory (review), Raw Data (review), and Battlewake (more on that coming soon!) fame have teamed up with HBO to bring this dystopian landscape to life. The show is a real head scratcher, but experiencing it from a first person virtual reality perspective is downright terrifying.

In many ways Westworld Awakening is the culmination of the best parts of the Survios team’s previous efforts. The team has done a great job of delivering on showrunner Jonathan Nolan and Lisa Joy’s take on Michael Crichton’s 1973 classic. At its core the game is a horror-themed adventure title that keeps the player tense with twists and turns. As you can see in our first bit of game capture below, the protagonist Kate has recently become aware that something is not quite right with her world. She’s an android that has begun to see the seams in the virtual space, finding herself trapped by her android controls and programming, a victim of the various other robots in the park that have their own violent delights in mind. Imagine having the simple task of making your way upstairs to talk with someone, finding a key to unlock the door, inspecting the various pictures and hand-written notes around the room only to find your would-be conversational target is lying dead on the floor, apparently beaten. You want to run but you find yourself axiomatically locked into place by your programming, but keenly aware that your role in this sadistic passion play is to die for someone else’s amusement. Now double that terror as you slide to the floor, bleed out, and then wake up to do it all over again for the next rich sadist.

Westworld Awakening’s worldbuilding is excellent, and that’s thanks in large part to top shelf writing coupled with spot-on perfect voicework. The production values on this outing are easily the best we’ve seen in any VR game to date. Similarly, the motion capture work brings each character to life, though you’ll probably wish they didn’t. The game’s five hour run time are precisely the right kind of engagement VR needs. Even playing through it a second time makes it no less nerve wracking. The suspense is cranked to 11, and that makes the horror aspects that much more hair raising. Being stabbed in the gut in a flat-screen game doesn’t even move the needle, but being shanked repeatedly in VR is a visceral and hair raising experience that is frankly unsettling. VR as a medium takes you to new places, but to quote the Scarecrow – “I never said they’d be places you want to go”. On that note, while it’s not required that you watch the two available seasons of the show as this is a tangential storyline, it will make some of the set pieces, scenarios, and props make far more sense.

Survios has always provided a wealth of control options for their games to match any comfort style. Naturally there is a ‘whole hog’ option of natural motion with smooth turning, if your gut can handle that, but if you can’t stomach that immersion level there’s also a borrowed mechanic to serve your needs. Locomotion in Sprint Vector is handled by swinging your arms in an exaggerated running motion. This mechanic sees new life in Westworld, though you have to squeeze the triggers to move. I’m using Valve’s new Index controllers, so grabbing things means literally gripping them in a natural way, raising the immersion even further. As you find yourself being hunted, you’ll need to crouch (you can do this physically, or with a button press, though getting under things may require a bit of both) and slide along on the edge by going hand over hand. Gripping the table, you’ll shimmy slowly around these objects to safety. 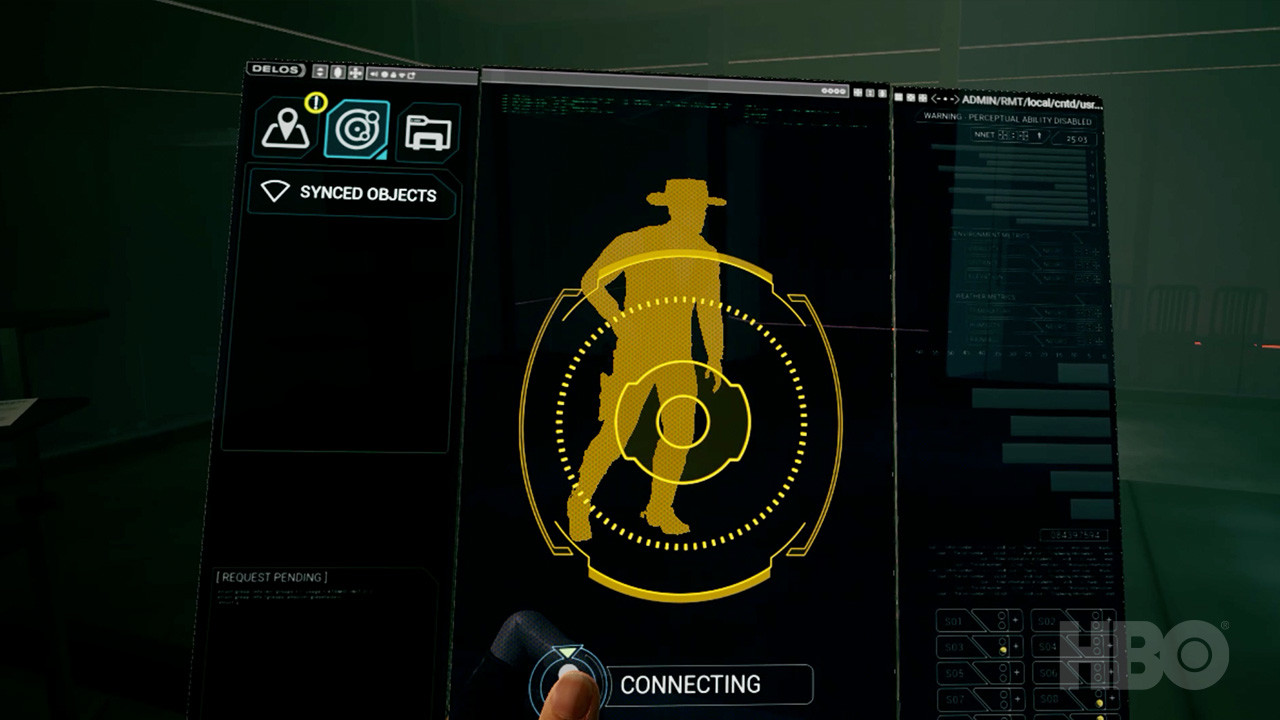 The tablet will help you navigate the puzzle elements of the game.

To provide for VR and adventure game rookies alike, Westworld Awakening has three difficulty settings. The combat isn’t traditional hand-to-hand, so these settings have more to do with how many hints you’ll receive about objects in the environment and how you might use them to puzzle solve. The “Immersive” play mode gives the fewest hints, and for a game built on suspense, I recommend a little less hand-holding anyway. Still, it’s nice to have options if you are introducing the experience to the non-gamers in your family.

There are a couple of hiccups in Westworld Awakening, but thankfully one of them is very easy to fix. The default gamma setting is far too low for the Vive Pro, crossing the line between creepy and too dark in the wrong direction. It’s an easy adjustment, but one you’ll want to make before you get started, as you can see in our first video above.

The other problem I ran into with Westworld was that, despite a great degree of room-scale freedom, I found myself running into the safety boundaries. This causes the screen to fade and gridlines to be placed over everything, and as you’ll see below, it happens frequently. In a game about true virtual reality, it’s immersion breaking to be reminded that you are viewing the virtual world, virtually.

Speaking of running, as the movement mechanic is cribbed from Sprint Vector, the arm swinging translates with mixed results. There’s a smooth movement option, but most people will likely opt for the swinging. Put simply, the movement ends up resulting in something akin to a drunk on rollerskates. As you can see in this video of gameplay on Delios, sometimes I’m able to get Kate to zip forward in a straight line, but more often than not I end up doing a bit of side stumbling. Similarly, on the Index controllers I ended up crouching inadvertently more than a few times, accompanied by Kate’s random grunting.

The most egregious issue I ran into with Westworld was just a mismatch between the audio cues from Kate and the reality of what’s going on in the environment. There were times when Kate would announce that she felt the coast was clear when, in fact, the would-be murderer was standing nearby with his axe in hand. It’s not a big deal, but it does make you wonder how poor Kate’s eyesight really is.

From start to end, Westworld Awakening is a thrill ride. The Survios team has managed to give us something that doesn’t feel like a tie-in, but instead an experience that could easily live in the well-written and twisted world HBO has created. While there are a few hiccups, and $29.99 is a bit steep for the length, these virtual delights have violent and genuinely hair-raising ends, and I can’t wait to share them with my friends.

Ron Burke is the Editor in Chief for Gaming Trend. Currently living in Fort Worth, Texas, Ron is an old-school gamer who enjoys CRPGs, action/adventure, platformers, music games, and has recently gotten into tabletop gaming. Ron is also a fourth degree black belt, with a Master's rank in Matsumura Seito Shōrin-ryū, Moo Duk Kwan Tang Soo Do, Universal Tang Soo Do Alliance, and International Tang Soo Do Federation. He also holds ranks in several other styles in his search to be a well-rounded fighter. Ron has been married to Gaming Trend Editor, Laura Burke, for 21 years. They have three dogs - Pazuzu (Irish Terrier), Atë, and Calliope (both Australian Kelpie/Pit Bull mixes).
Related Articles: Westworld Awakening
Share
Tweet
Share
Submit