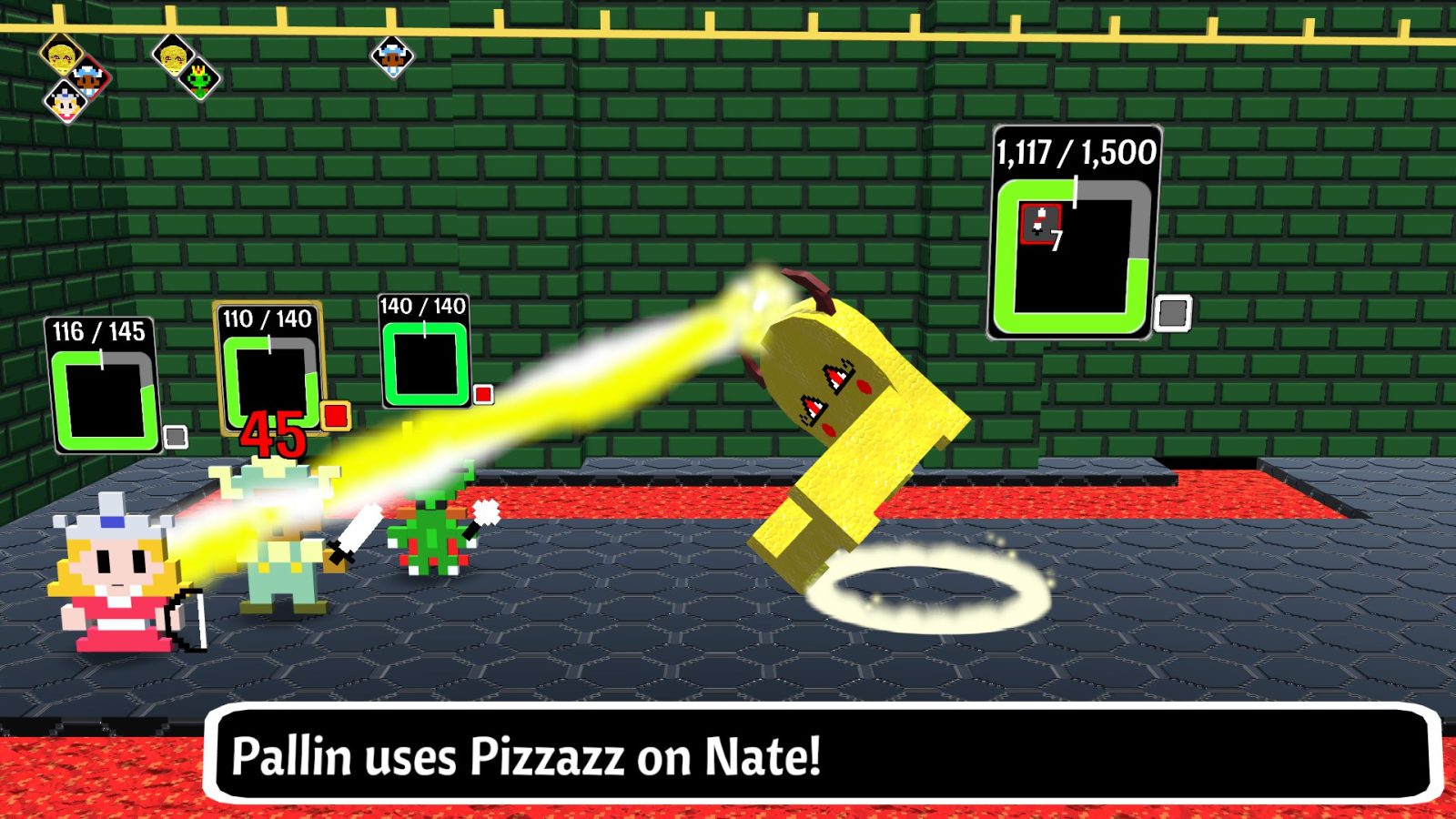 Parodies always bring baggage with them – they rely on something else to define themselves. If you remove the crutch of their source material, or they make their jabs on unsteady ground, parodies often struggle to keep their balance. They then risk accidentally tripping over their baggage, comically fumbling straight into a conveniently placed pie, getting hit in the face with a rake, and then falling right into a pitfall. Amusing in the moment, unfortunate in retrospect. Video Game Fables sets its sights on lampooning the traditional turn-based RPG, and while it never stumbles headfirst into a hole, it has enough close calls to make me wonder if it needed to pack the extra luggage at all.

My main concern with games like this is that they often feel like they are made out of spite; the developer has some kind of bone to pick and they’re using their game to do the picking. I see this a lot with visual novels and RPGs in particular, and I’m not a fan. Good parodies, and really good games in general, can’t be made with that attitude. If you don’t love the material you’re working with, it will show in the end result.

Thankfully, I don’t get the sense that the creator of Video Game Fables hates RPGs. Genuine affection for the genre shines through here. In some ways, however, that attitude clashes with the kind of game Video Game Fables aims to be. The core message Video Game Fables imparts is that conventions should not be blindly adhered to. It’s a story about video game characters breaking out of their traditional roles and ultimately breaking the traditions of RPGs in general. Loving RPGs and advocating that they change are not necessarily mutually exclusive positions. These elements just need to be balanced carefully or else the overall message becomes muddled. 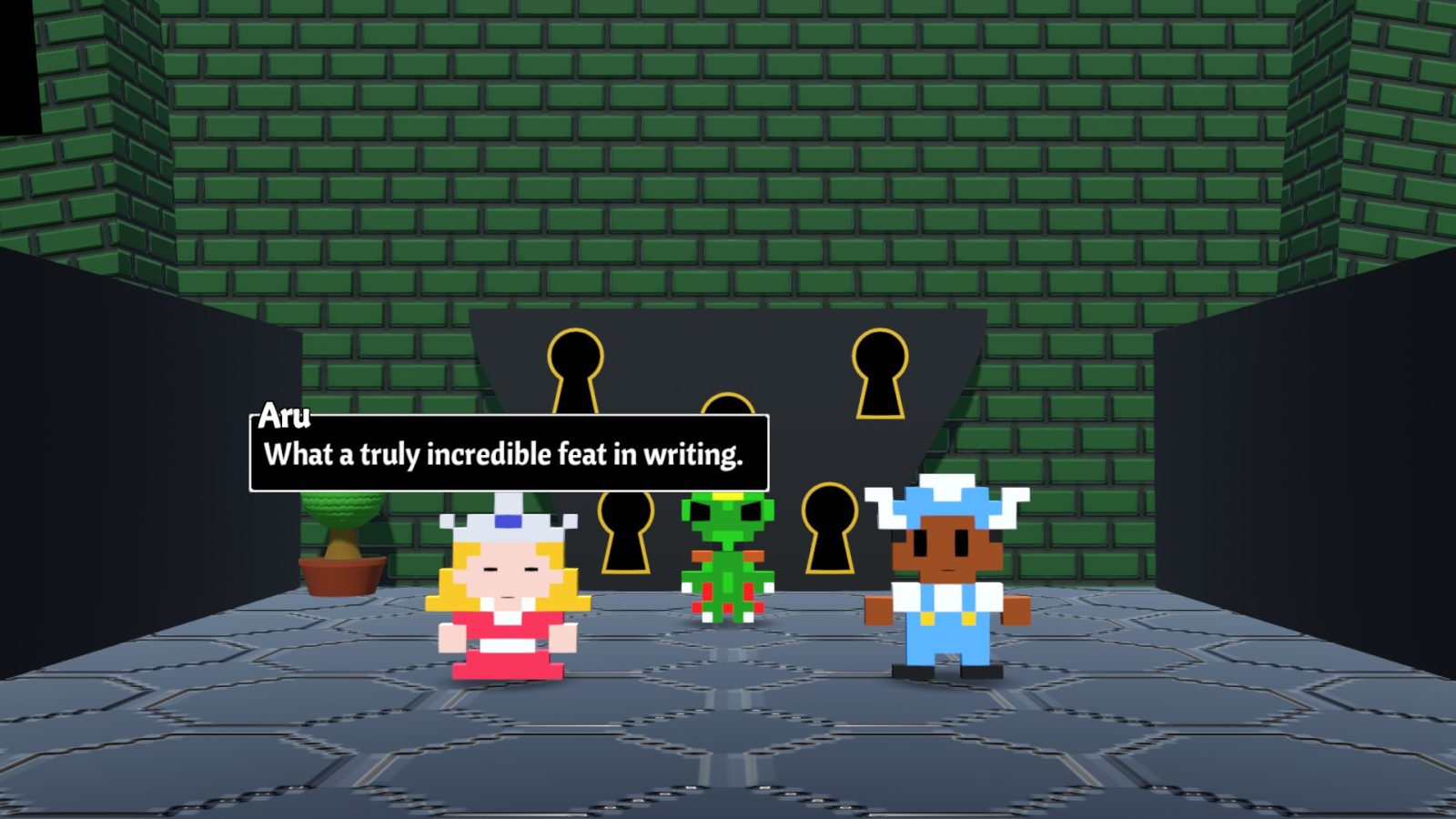 Despite its ambitions, Video Game Fables falls comfortably into the vast majority of RPG conventions. The game takes place in a typical fantasy world with all the character archetypes, locations, and concepts you’d expect. You encounter enemies in a relatively random fashion, pillaging their corpses for items and experience points to grow stronger. As you travel a world map, you explore dungeons and defeat bosses to progress the story in a linear fashion. That is all technically the point – the world of the game is supposed to be that of some generic old fantasy RPG video game. Whatever your excuse for using a generic setting happens to be though, if you don’t do enough to make it interesting, you’ll still be left with a generic setting.

The game primarily differentiates its world from its inspirations through its writing. Every character has something snide, goofy, or simultaneously snide and goofy to say at virtually all times. While amusing, I don’t think it’s enough. Don’t get me wrong, the writing is cute and I appreciate the silly ways it plays with your expectations. That’s all well and good, I just can’t honestly say that dramatically changes what Video Game Fables really is. If you were to remove the wacky dialogue, you’d be left with a rather straightforward fantasy adventure.

This feeling struck me the hardest as I was traversing the world map. Moving through the world map completely isolates you from the writing. It’s just you, your compass, and whatever mist of enemies happens to materialize in your face. During these quiet treks between dungeons, the game’s personality hibernates and you realize you are playing a no-frills, relatively simple RPG. 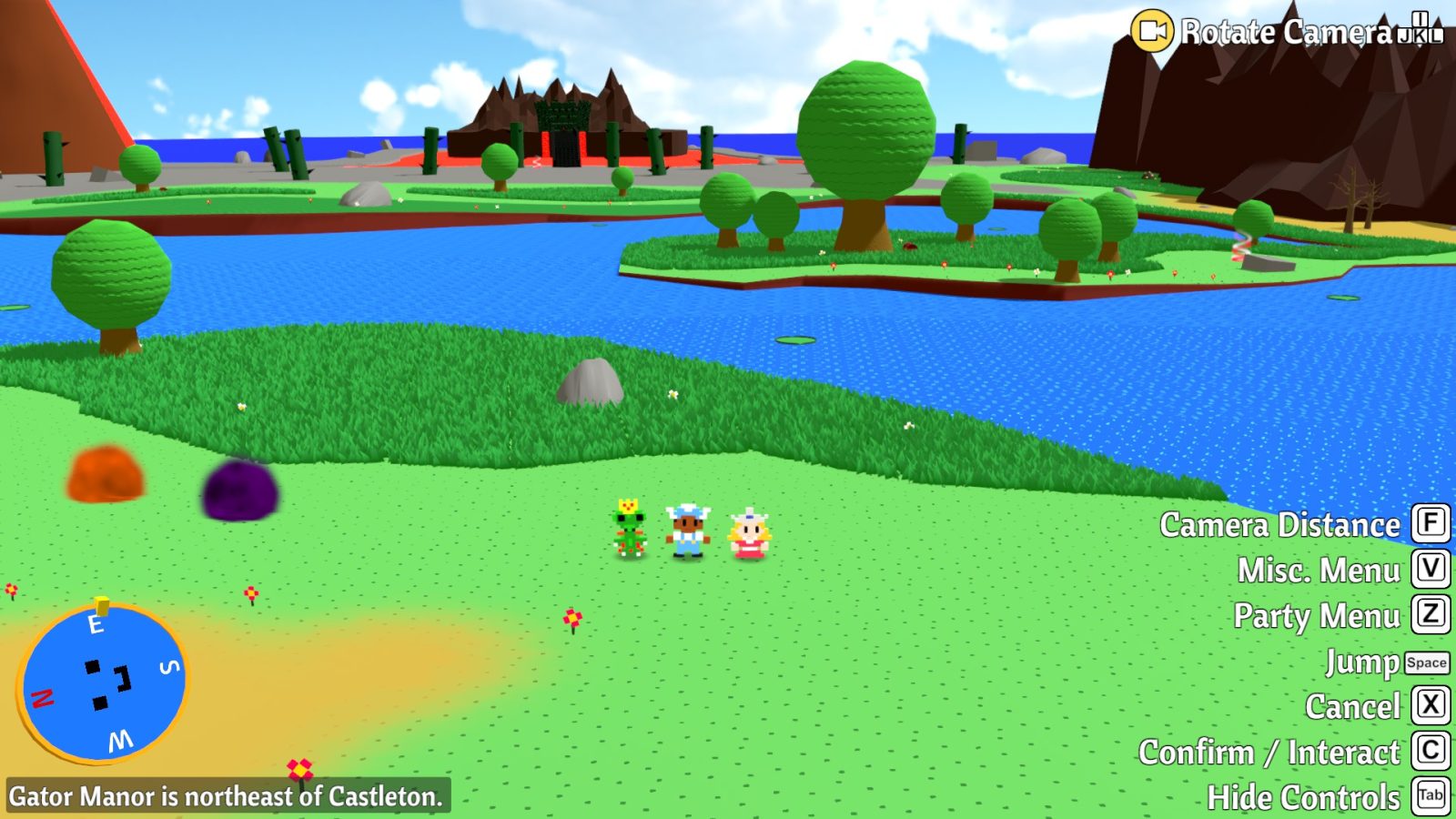 To be fair, Video Game Fables strays from convention with its battle mechanics as well, at least theoretically. The game puffs up its chest early on with mechanics that sound deep and interesting on paper. Critical hits are extremely common and landing one converts it into a resource that opens up access to stronger abilities. Turns run on a timer – the faster you select your command, the more potent your attack will be. The order of turns displays on a timeline, and you can voluntarily delay your actions out to later turns on the timeline for strategic purposes. Your characters are completely flexible in how they can be customized, with level ups, skill loadouts, and equipment builds remaining open to readjustment at virtually any point in the game. It’s a lot. This avalanche of mechanics initially buried me in the mindset that a surprisingly complex game must lurk beneath its simple presentation and structure.

In practice, the battle system requires very little of this depth for the vast majority of its enemies. I never know exactly what to expect when I’m starting an RPG, so I created my initial party setup to be balanced. I had a dedicated magic user, a dedicated physical attacker, and a ranged attacker that would spend most of her time healing. My strategy, then, was to wail on enemies with my attackers, only deviating from regular attacks for an occasional charged up critical hit ability, while my healer kept everyone alive. Using this tactic carried me through roughly 98% of the game (I base this statistic on my gut, I am not a Math Magician) without issue and without reason to change things up or otherwise explore my options.

The nuances of the battle system emerge only during the boss battles, and even then, only in a handful of them. The boss battles that take advantage of the mechanics are the most engaging part of the game by far. My favorite boss battle cleverly exploits the delayed turn order mechanic by pitting you against a group of enemies who each have a unique “rule” tied to them. They jump in and out of the battle, which forces you to pay attention to what rules are currently in effect. If you attack on a turn that conflicts with the rules in place, you get punished. This battle challenges not only your memory, but your long-term planning skills. It’s great – it makes me wish there were a lot more situations like this in the game. 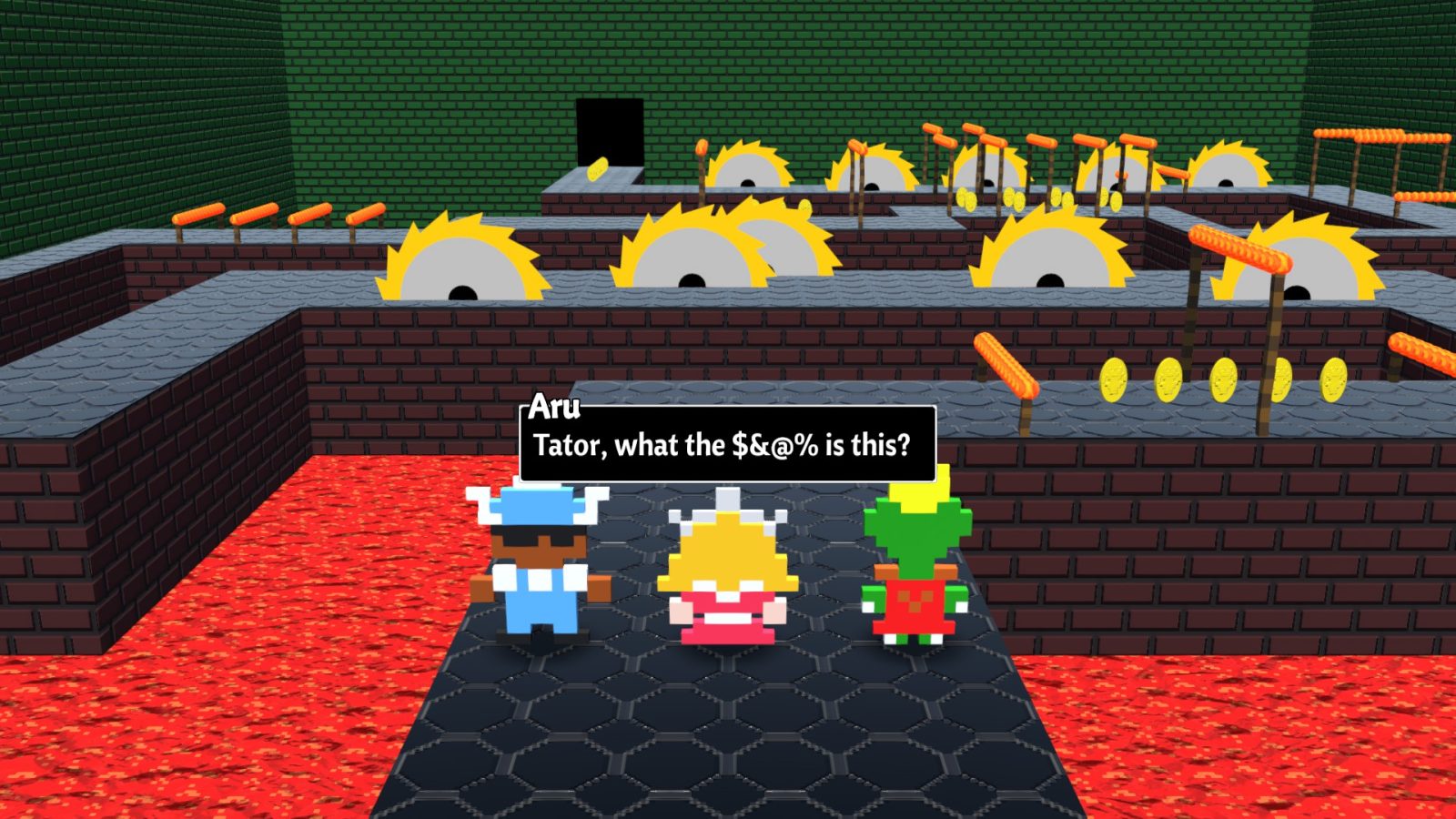 Instead, there are more bosses that focus on gimmicks unrelated to the actual battle system. One boss asks you to complete brief platforming sections in order to make it vulnerable to damage. Another gives you control of an off-screen ally to blast away enemies that are charging at your party during the battle. Action elements like these are the other way Video Game Fables upends convention. These elements pervade more than just the battles, as you progress through dungeons you’ll be hopping across gaps, driving cars, and riding beanstalks into the sky.

These sections are not involved enough to be frustrating and the variety makes for fun distractions, but they do make me wonder about the developer’s priorities. The game leaves plenty unexplored with the basic battle mechanics for most of its runtime, so throwing in some harmless albeit messy action elements comes across as a little unfocused. More importantly, none of the ways Video Game Fables spice up the experience change the fact that it is a relatively simple, standard RPG in a relatively generic setting.

To be clear, there isn’t anything wrong with an RPG being simple, standard, or relatively generic on its own. The main thing that drags this game down is that it is also an RPG about RPGs, and as a result works hard to try to convince you of its atypical nature, going so far as making it the core theme of the narrative. By drawing attention to its atypical-ness, it amplifies just how typical it really is. Or at least it does to me, maybe I’m just obnoxious like that.

What a developer does with their game is their own prerogative, and if the developer really needed this to be a game about games, then so be it. To me, the parody factor hinders more than it helps in this case. It relies too much on its subject matter to properly critique it or stand on its own merits. Many of the stronger elements that are present could have remained intact in a setting that moved beyond video games and felt more like an actual world. As is, Video Game Fables unfortunately lacks confidence in its message and its gameplay.

Video Game Fables is a solid if simple RPG that suffers from the baggage of its meta nature. The lighthearted dialogue will make you smile and there are glimpses of compelling RPG design strewn about the experience. The game just never truly rises above the height of the conventions it seeks to overthrow, which given the subject matter, is a distracting misstep that weakens the overall experience.

Jack's background is in law, but he's been writing about games since long before that. He aims to capture a game's essence in (hopefully) new and interesting ways with his writing. Occasionally he will even make his articles fun to read. Results vary on that. Talk to him about Mega Man! Preferably not in the third person!
Related Articles: Video Game Fables
Share
Tweet
Share
Submit