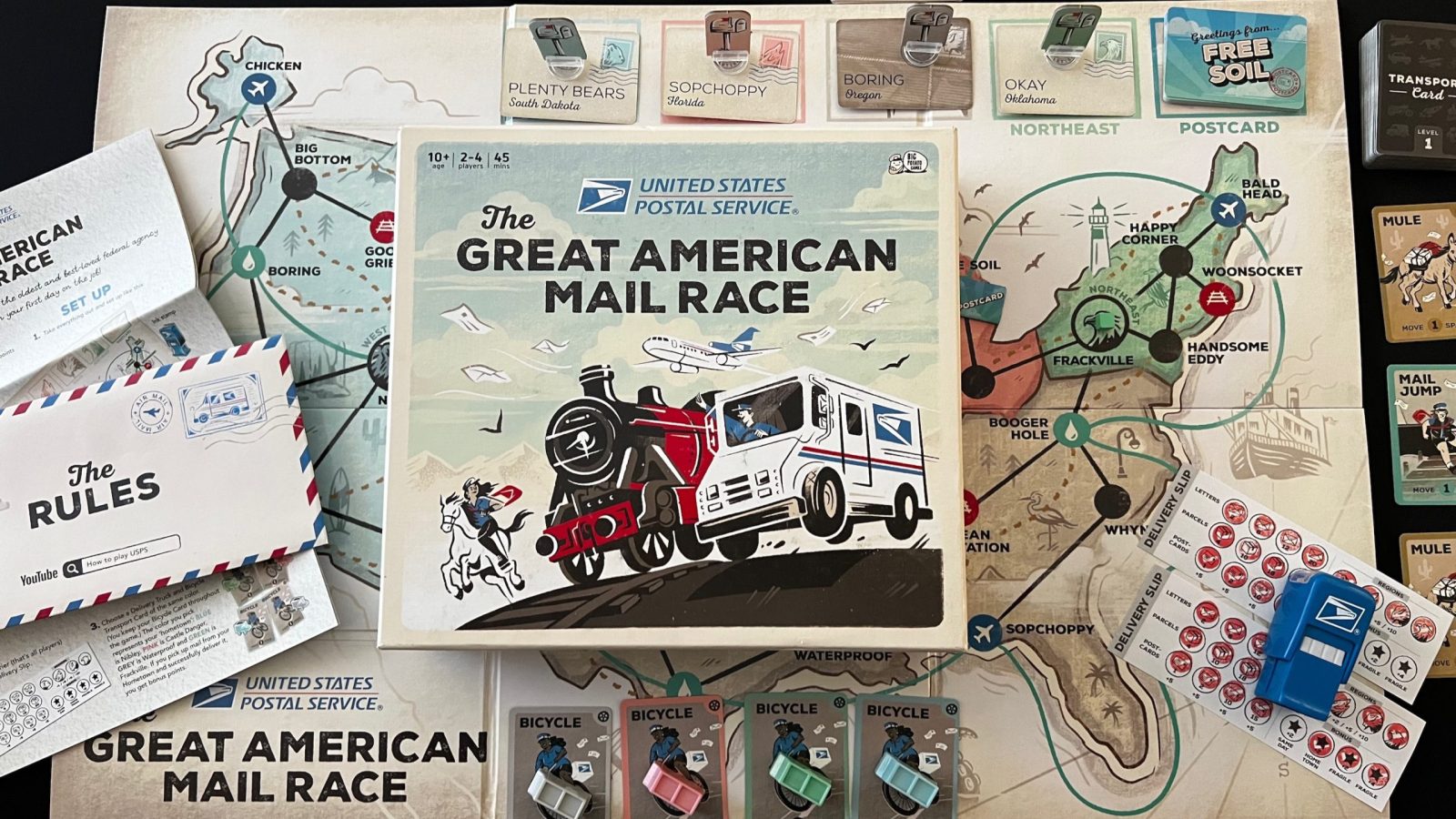 I won’t even lie to you, at one point in my life, I thought I wanted to be a mailman. In elementary school, we were able to write letters to students in other classes and each classroom had their own address. I applied for and was given the job of mail sorter and carrier and got to stamp and deliver letters all over the school. Alas, my career choices shifted elsewhere, but I still dream sometimes of donning the short khaki shorts and the blue shirt. In USPS: The Great American Mail Race, I get to touch that dream and more. 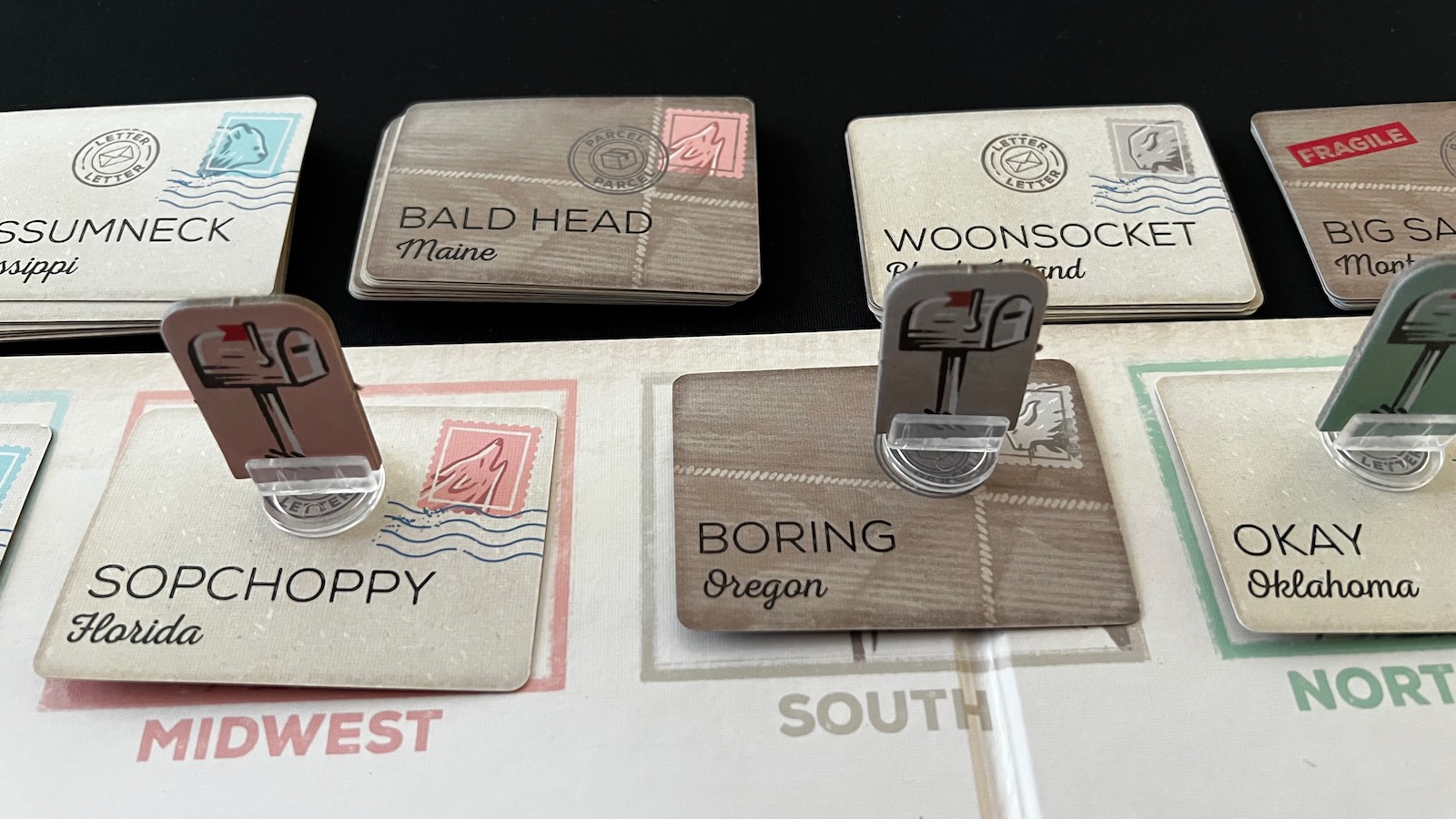 USPS: The Great American Mail Race is a 2-4 player game from designer Ed Naujokas, with art by Zoe Lee, and published by Big Potato. In Mail Race, players are tasked with delivering as much mail as possible to a variety of uniquely named and very real locations across the United States. What you deliver and where and how you deliver it will score you points. The mail carrier with the most points when the deck of cards runs out is the winner. 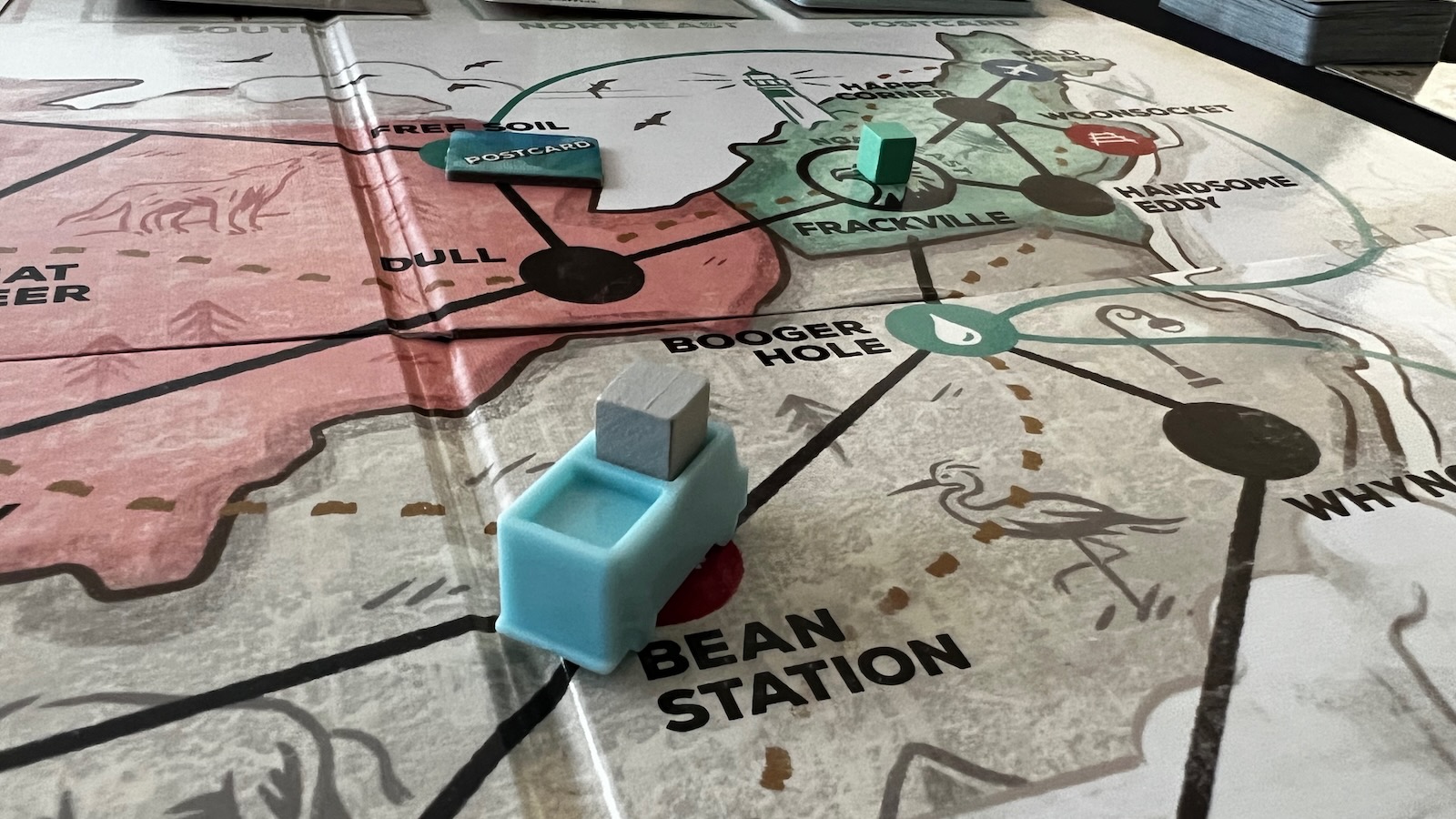 Player truck on the way to a delivery!

Each player takes control of a mail truck and a trusty bicycle movement card. Each turn, a player has three actions to either play or draw new movement cards. Movement cards are sorted into three phases and allow players to move a certain number of spaces over different terrain types. After being played, the players move their trucks the exact distance listed on the cards without backtracking over their previous route. The goal of movement is to pick up letters and parcels from one of four distribution hubs located on the map. When landing exactly on one of these hubs, players will pick up the colored cube corresponding to the region and the location card where they must deliver the cube. Players can hold up to two cubes at a time. To deliver, the player must land on the delivery exactly and will then get to stamp their player slip. Players can also pick up special postcards along the route and can also steal cubes from other players. 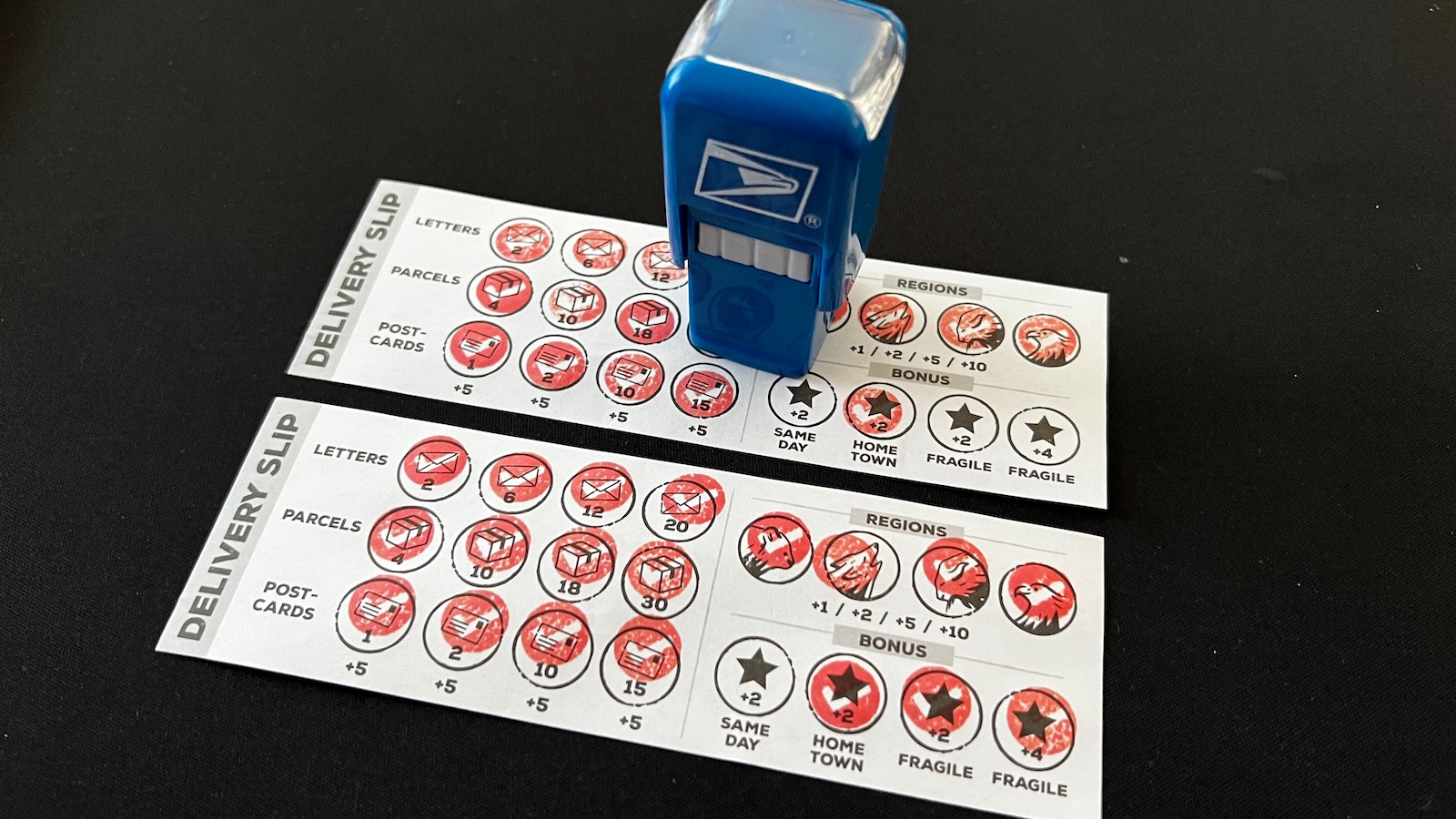 The player slip is how the mail carriers track their points. Points are awarded based on the type of mail delivered, the regions delivered from, postcards picked up along the way, special conditions such as delivering to the region matching your player color, and bonus points from completed columns. One of the best things about the game is using the stamp, shaped like a classic USPS blue mailbox, to mark the player slips. 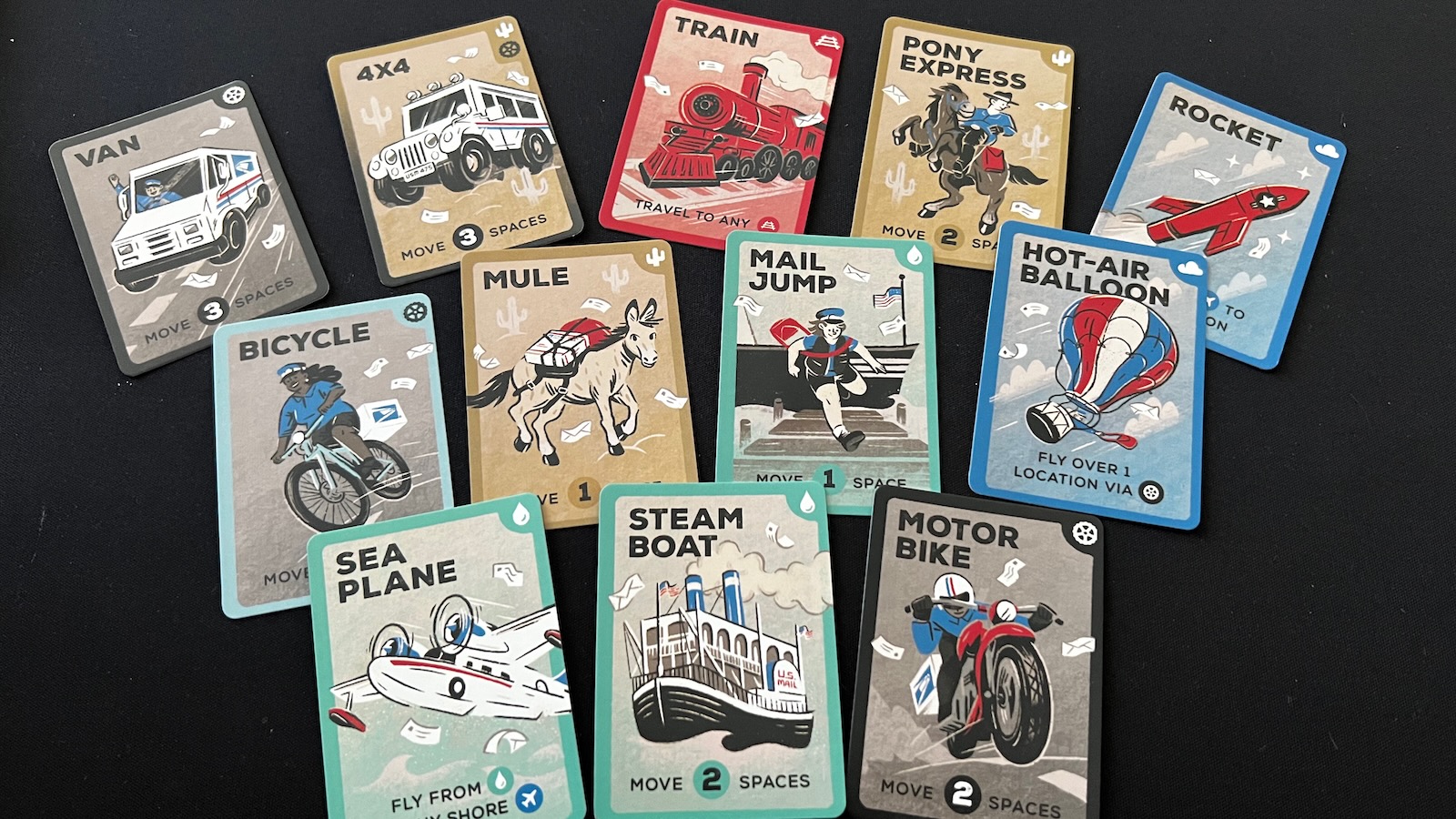 The artwork of Mail Race is fun and nostalgic. The colors are muted pastel and the illustrations on the cards elicits a dream-like feeling filled with freshly mowed lawns, white picket fences, and your friendly neighborhood mailman delivering a letter. The point tracking sheets and mailbox stamp are a fun touch. Another fun addition to the game are the unique town names they use for destinations. Towns like “Dull, OH” and “Booger Hole, WV” are on the delivery queue. The icing on the cake are the instructions. They come in a stamped envelope and read like a letter. The only drawbacks from the production side are the quality of the cards and the insert. While having an insert is always a plus, the provided insert isn’t very intuitive when trying to pack up. The cards are of a poor quality and already showed signs of warp and wear after a few plays. 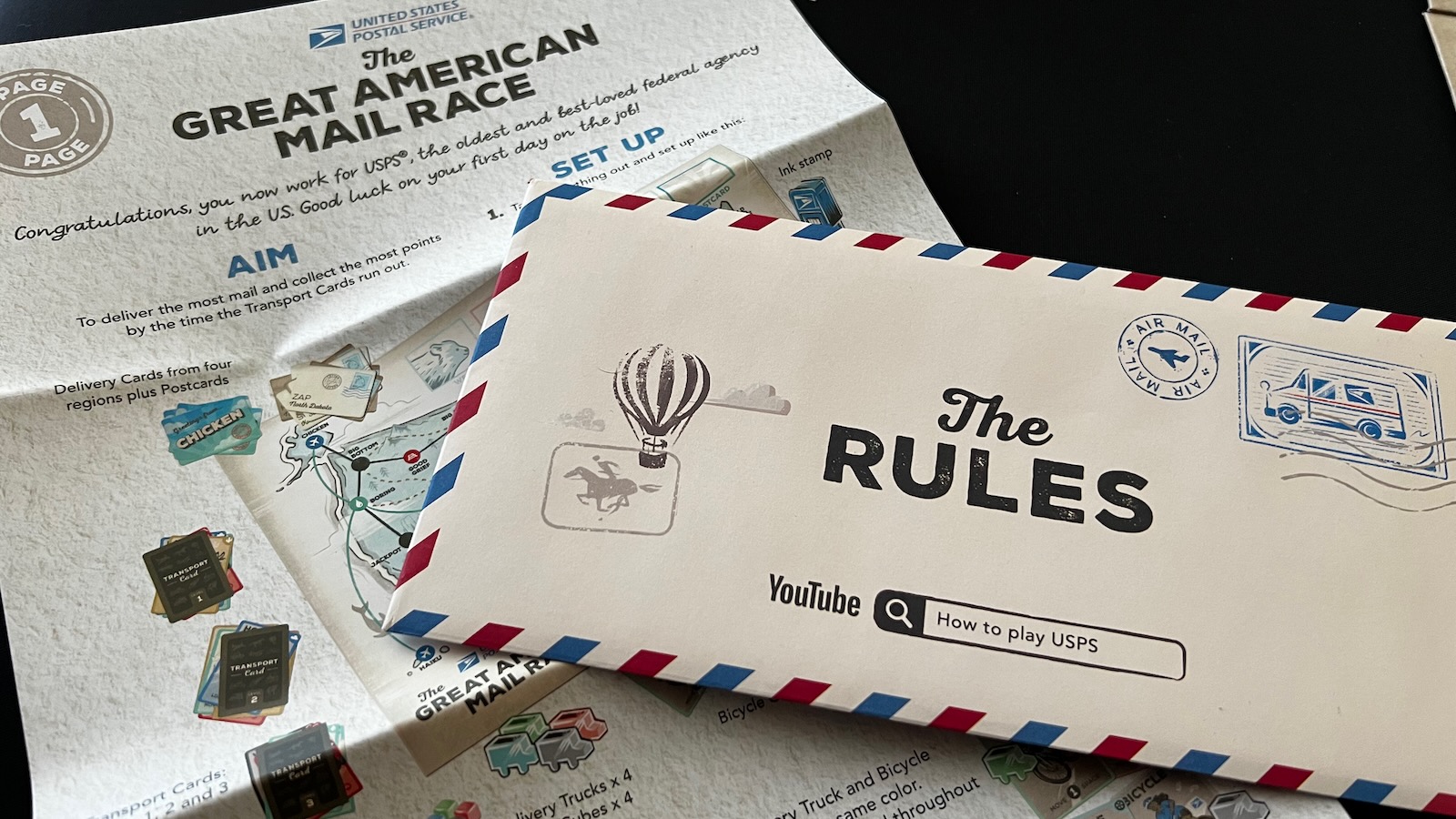 The rule book presented in an envelope.

The gameplay of Mail Race is relatively simple but provides some fun strategy. Players have to plan out their moves efficiently using the cards in their hand and figuring out which movement cards to pick up. Since players cannot end their movement in the same space as another, players have to chart their moves around blocked locations, maneuver away from others to safeguard their mail, or move through them to pick up an extra delivery. Mail Race is great at all player counts and is a perfect entry level pick up and deliver game.