I’m sure that we’ve all either experienced someone using us for their own gain or at least witnessed it happen to someone else to a degree. Usually, this is meant more figuratively, like tricking someone into doing your work for you or playing off their ego in order to get something for nothing. It can be crummy, but it happens. Now, what if I told you that REZ PLZ was a game based on using your brother for your own gain in a very literal sense? What I mean is, you’ll be putting your brother into harm’s way just so you can progress. Hear me out, it’s a lot more comical than it sounds, especially since these two are goofball, novice magicians who thankfully have the power to resurrect one another.

The story follows two brothers, Arcan and Zeph, who are late for their lesson at magic school. After arriving, Arcan and Zeph are tested on their knowledge of spells, which unfortunately ends with Arcan blowing up Zeph instead of lighting a candle that Zeph was holding. Arcan passes out and wakes up in the infirmary, only to discover that Zeph is okay thanks to the power of a resurrection scroll. The nurse explains that as long as both brothers hold onto their respective resurrection scrolls and some lazarus stones, all they have to do is recite some key words to revive one another. This interaction sets up the main gameplay mechanic of the game, which I thought was nice. Instead of just being an “it is what it is” situation, they give an in-universe explanation for multiple resurrections. It’s during this moment that the school is attacked and their classmates are captured. Being seen as weak and non-threatening, the brothers are tossed into a well and left for dead. This is where the journey begins. 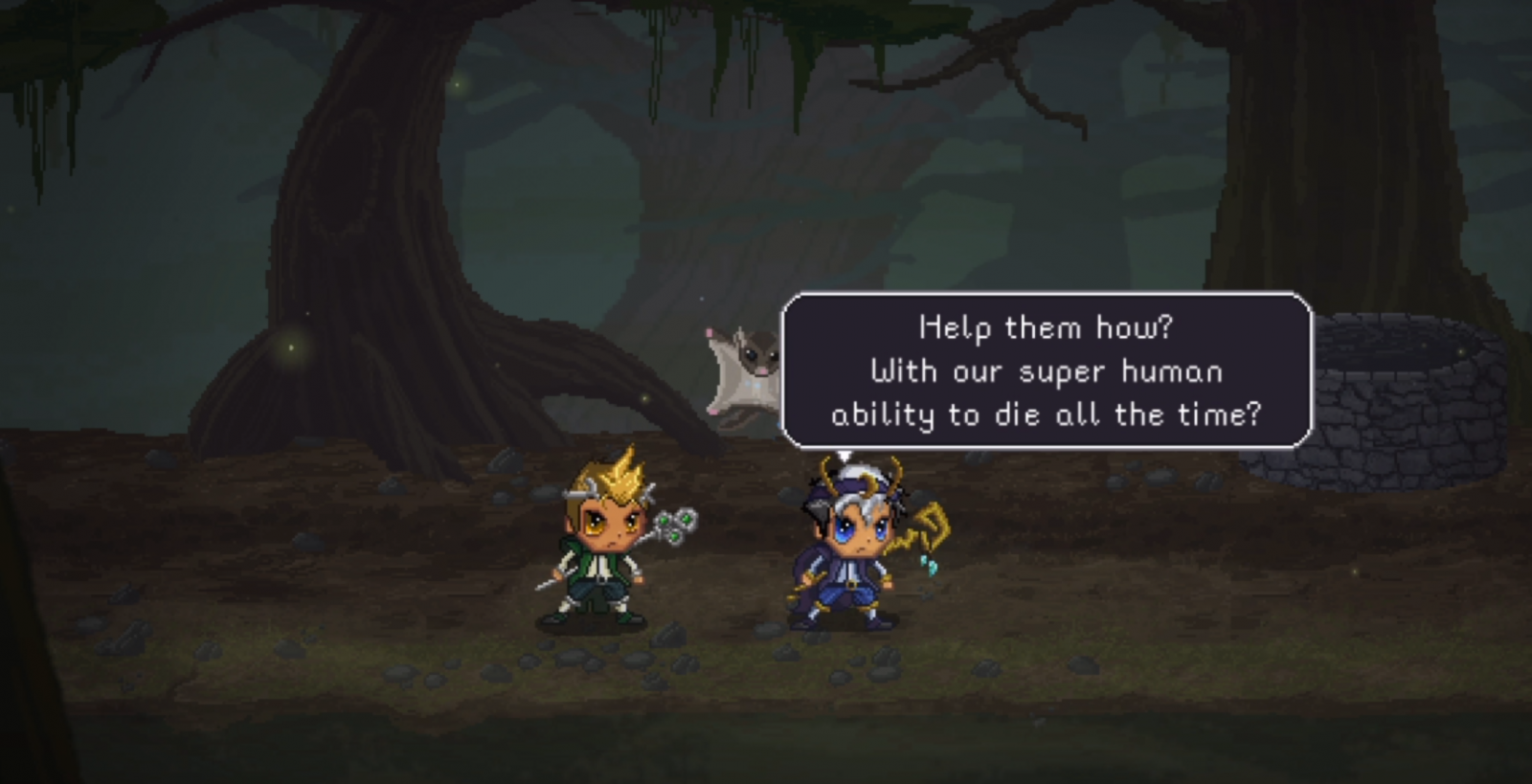 The gameplay revolves around Arcan and Zeph platforming their way through various levels in an attempt to escape danger and wait it out. Yeah, they aren’t trying to save anyone, but as time passes, they basically get forced into doing so. Along the way, these two will need to defeat enemies, avoid death traps, and figure out how to remove obstacles blocking their path. Besides the usual running, jumping, and wall jumping, you can also hit enemies with your staff, use spells you learn along the way, give the other brother a boost, and even sacrifice one of the brothers to open up a new path.

You can play the game solo or co-op with a friend, but either way, both brothers need to be played. When playing solo, you just press E to swap who you’re controlling. Each brother can have a max of three lazarus stones held at a time. When one of the brothers dies, the surviving brother can press E to spend a lazarus stone and revive their fallen bro. If both brothers die, thankfully the game is forgiving and spawns both brothers nearby at the cost of two stones. If all six stones are spent and only one brother remains, then the grim reaper slowly creeps up on them and strikes them down. You can find lazarus stones throughout the levels to replenish some of your stash, which helps. This mechanic isn’t just a way to keep track of lives, it’s actually a key method of progressing. You may need to make one brother jump into spikes in order to make a path for the other one to safely pass, or you may need to get a brother sliced in half so that the other brother can place both halves on buttons that lower platforms for him to jump onto. The amount of sacrifice and death that you’ll be responsible for is immense, but Arcan and Zeph both know that it’s the only way to move ahead. That being said, the cleverness of how you must use death in order to move forward is impressive, and the fact that it’s done in such a goofy way makes it less gory. 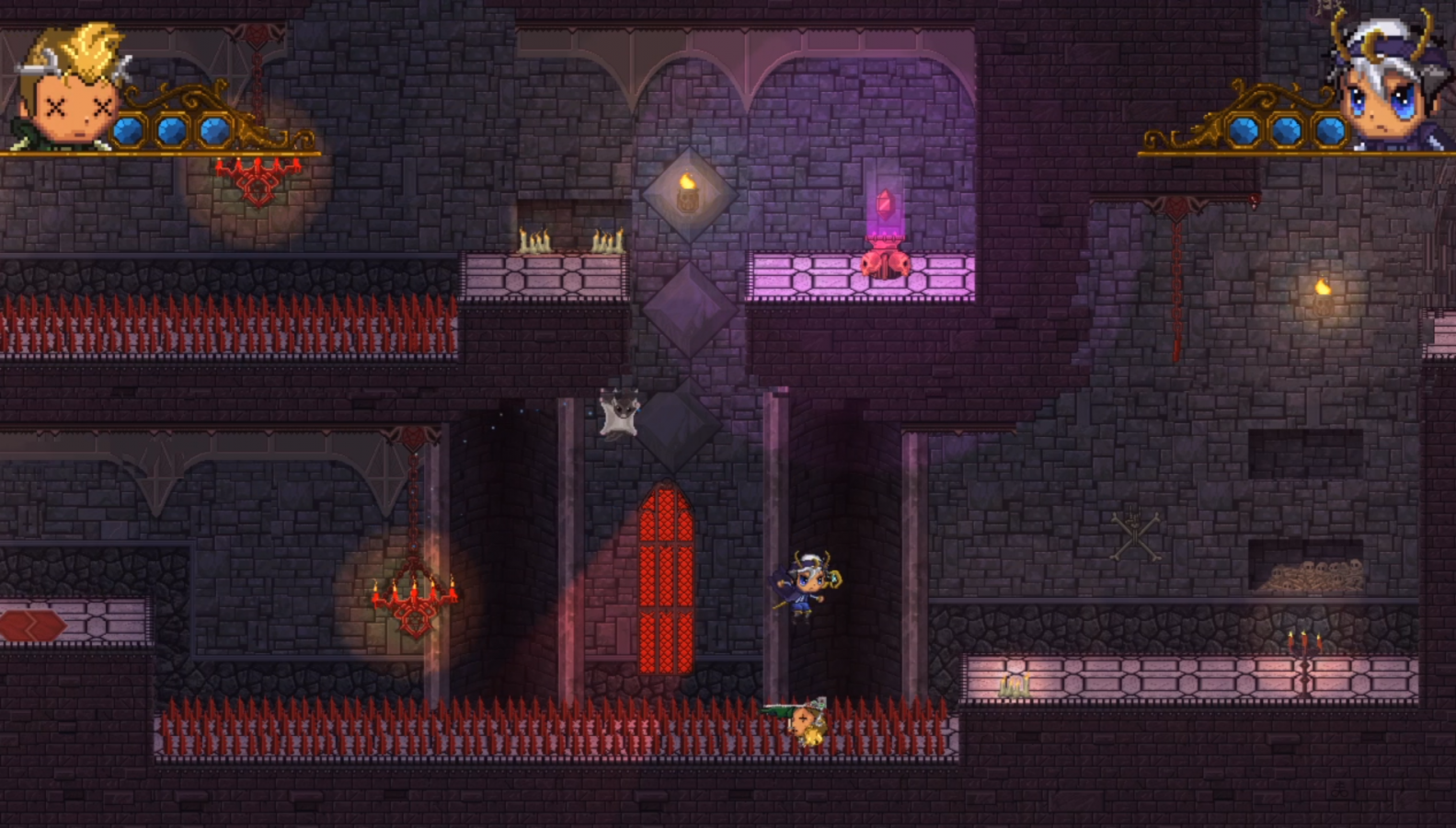 As previously stated, you’ll learn some spells along the way, but only from defeating bosses. These new spells will help you in later levels as new obstacles get in your way. For example, the first spell you learn lets the brothers turn into boulders. As boulders, they can be pushed in front of dangerous traps such as fire to protect the other brother, they can use their extra weight to activate switches or lower platforms, and a few other uses that I’ll leave for you to discover. Figuring out new ways to use these spells is part of the fun, but at the same time it can be a bit aggravating if you don’t realize what you need to do with them.

Relating to the annoyance of using some spells, you’re bound to get frustrated with the death mechanic and some puzzles along the way. There are times when you’ll likely encounter a situation where you won’t know how to move forward and that will get you killed. Either that, or you’ll have to make perfectly timed jumps to avoid dying. With lives limited by the lazarus stones and the fact that dying is often necessary to get through certain parts, losing lives accidentally becomes much more annoying. Add onto that, that fully dying forces you to replay the level from the beginning, and you’ll start getting mad. This is the case with boss levels too, especially the lava one. I had to replay that stage so many times that I took a break after I finished it. Thankfully, the levels aren’t too long, but they’re long enough that restarting is a huge pain. 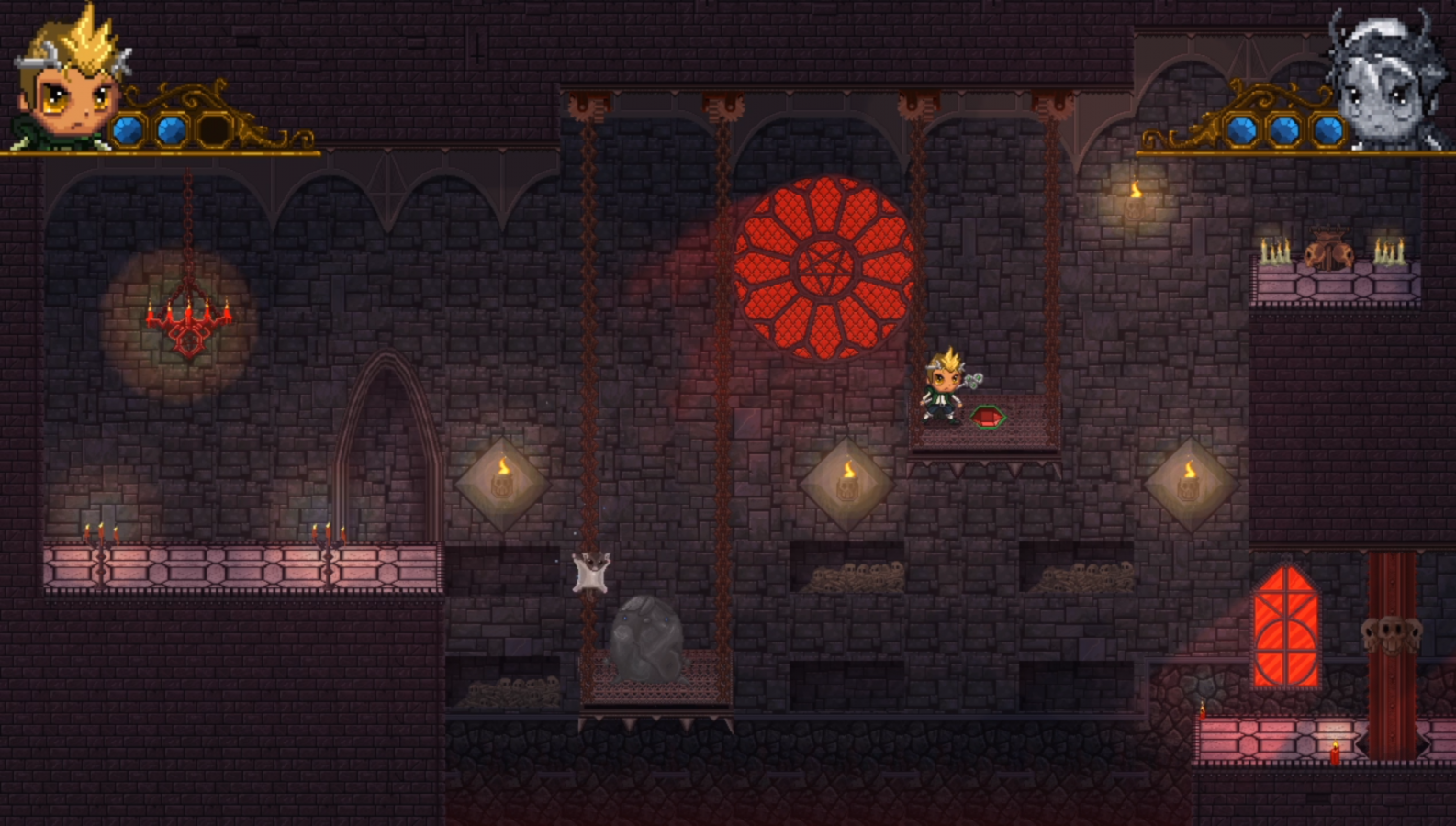 On a brighter note, the art style of the game looks good. I like the chibi-like style of the characters, and the enemies all look pretty nice too. The levels, although frustrating at times, are all varied enough to keep things fresh and are pleasant to look at. The soundtrack matches up well too, so nothing feels out of place. All in all, REZ PLZ is a challenging yet frustrating at times platformer with a clever resurrection mechanic baked in. Do you have what it takes to overcome Arcan and Zeph’s lack of magical skill and knack for dying? Can you save your classmates and the world? I guess you’ll just have to die trying, again and again.

REZ PLZ is a platformer with a fascinating resurrection mechanic built in. The limited lives, precise jumps, and puzzles may frustrate you, but it's not enough to ruin the game too much. The goofy way the premise is presented will make you smile, but just know that you'll be the cause of plenty of death if you want to move forward.

Codi loves to play video games and watch movies. He will watch almost any kind of movie just to experience them. His ideas take inspiration from the shows and movies he watches, and games he plays. He also loves a good pun.
Related Articles: REZ PLZ
Share
Tweet
Share
Submit