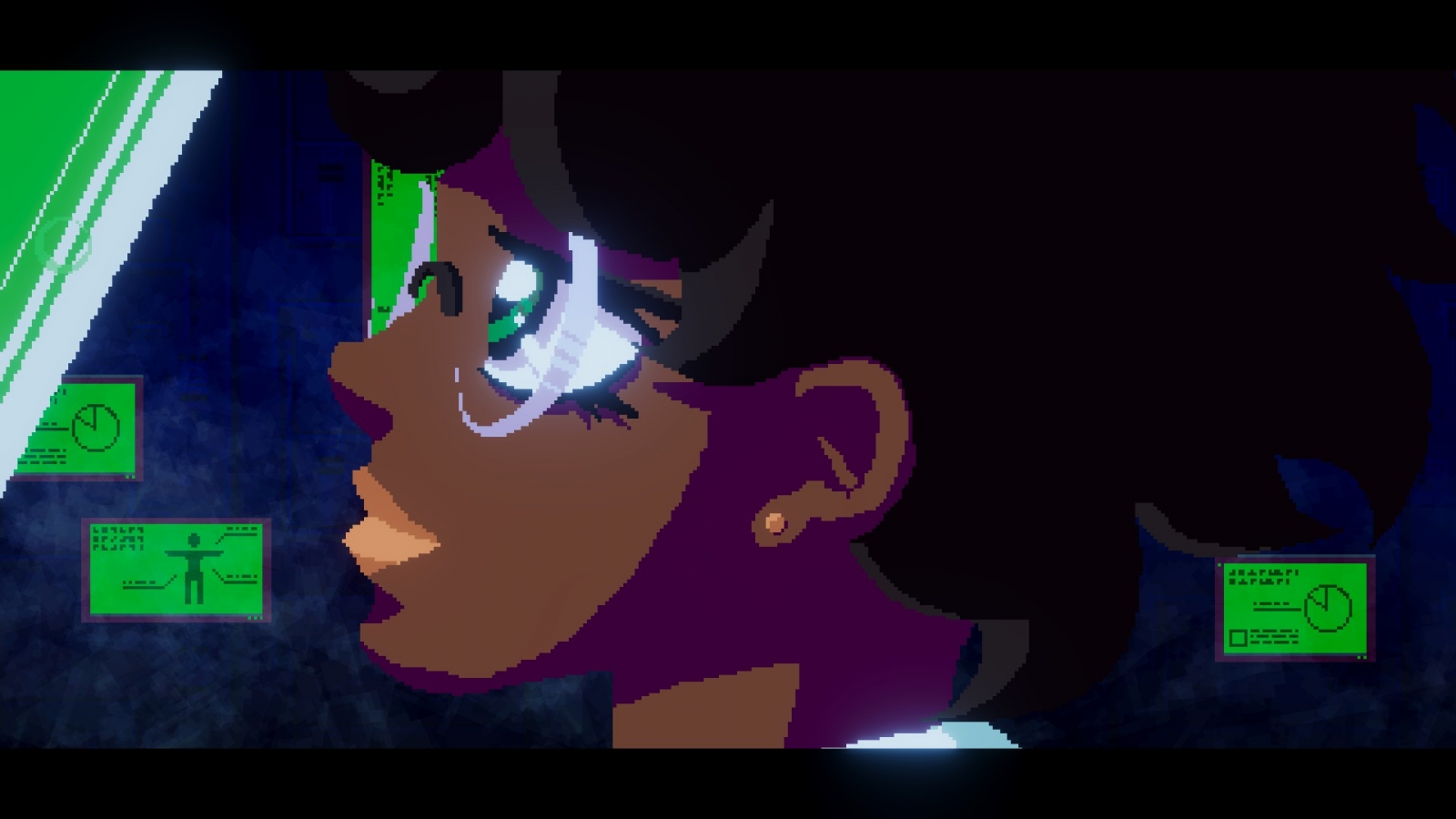 In the distant future, after humans have ravaged the earth through pollution and other disasters, a strange meteor lands on the planet. This mysterious object gives off an energy called Anima, which suddenly grants automatons across the world consciousness. Humans, fearful of their already dwindling species being replaced by machine lifeforms, go to war. After a desperate conflict with casualties on both sides, a massive tower suddenly appears on the meteor and the humans take refuge inside, hoping to starve the androids of Anima. Without Anima, an android will eventually become Unsighted- a monstrous husk of their former self, attacking anything that moves. With time quickly running out, only Alma has the strength to save android-kind and rescue her girlfriend.

Unsighted is essentially one gigantic Zelda dungeon. Sure, there are five more traditional “dungeons” dotted around the map with their own mechanics and keys to open doors, but you could take the keys from one dungeon and use them in another. As someone who loves Metroidvanias and Zelda games, Unsighted is the perfect mix of these two specific types of exploration. In fact, combining seemingly disparate parts of other games is a bit of a theme in Unsighted. Combat can feel a bit like Dark Souls initially with a stamina system and slower, deliberate swings of swords and axes. You’ll quickly come across a gun, however, and learn to use the Gears of War reload system to continuously fire while your stamina recovers. Add in an incredibly satisfying parry system and some platforming for good measure, and you’ve got yourself a solid game of the year contender.

Alma can equip two weapons at a time, one in each hand and bound to the left and right triggers respectively. Melee weapons will consume stamina, while ranged weapons will consume ammo, with a few exceptions we’ll get to in a bit. You can block for a moment by pressing Circle, and doing so the moment an enemy’s attack connects will stun them for a short time and guarantee a critical hit. Conversely, you can press X to jump out of the way for a moment of invincibility. There’s no traditional leveling system in Unsighted, so you have to rely on improving your skills over time and equipping chips and gears or upgrading your equipment.

Occasionally upon defeat, an enemy will drop a chip. At one of the terminals across the world, you can equip these for special effects like sprinting not consuming stamina or healing 1 HP for every 3 enemies defeated. Chip space is limited, and some will take up more than one slot, but you can increase your total slots by paying a large fee. For more temporary boosts, you can craft gears which, once activated, can nullify a certain number of hits, increase your attack, or even revive you upon death. It’s a very cohesive system that really allows you to customize your playstyle while not requiring you to change things up entirely if you just need an extra boost to get through a fight. 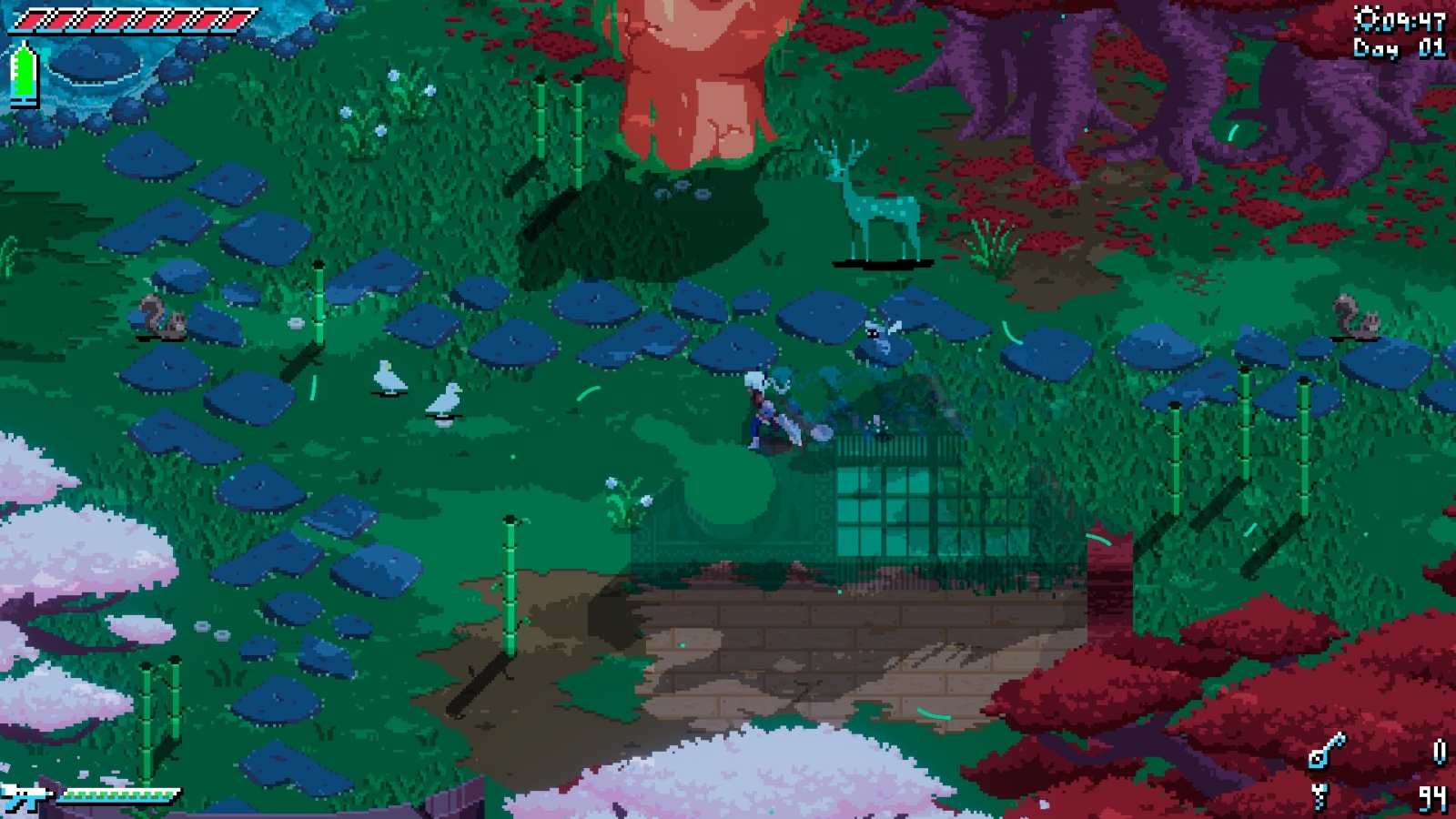 While you can come across or make chips and gears, permanently increasing a weapon’s attack power or ammo capacity can only be done by certain NPCs who can and will die if they run out of Anima. You can see how many hours a character (including yourself) has left by talking to them or looking at your contacts list, and the only way to extend their time is to give them meteor dust. This rare and limited item does have other uses, like exchanging it for additional syringes which is your only method of healing in combat, so you may have to choose between letting a character live 24 hours longer to make use of their shop or getting something to help you survive longer. While you can turn this time limit off by using the Exploration Mode settings, I would recommend keeping it on as it’s an integral part of the story and adds tension to every moment. Besides, if you’re short on time and feeling particularly heartless, you may even be able to take someone’s time and use it for yourself…

Unsighted’s world is huge and full of secrets to find. As you complete dungeons, you’ll gain access to new tools or “weapons” to aid in your exploration, like hookshots or the spinner straight out of Twilight Princess. While the spinner is fantastic and gets much more use than the Zelda game that inspired it, items like the hookshot or ice grenade launcher can be a bit more cumbersome. Since the latter are categorized as weapons, you have to equip them in one of your hands much like Link’s Awakening. It can be annoying to fish through your item menu every few seconds to swap weapons, and being able to hotkey loadouts would have been appreciated. Even so, all of these are fun to use, especially the double hookshots, and can even give you an edge in combat if you know what you’re doing. 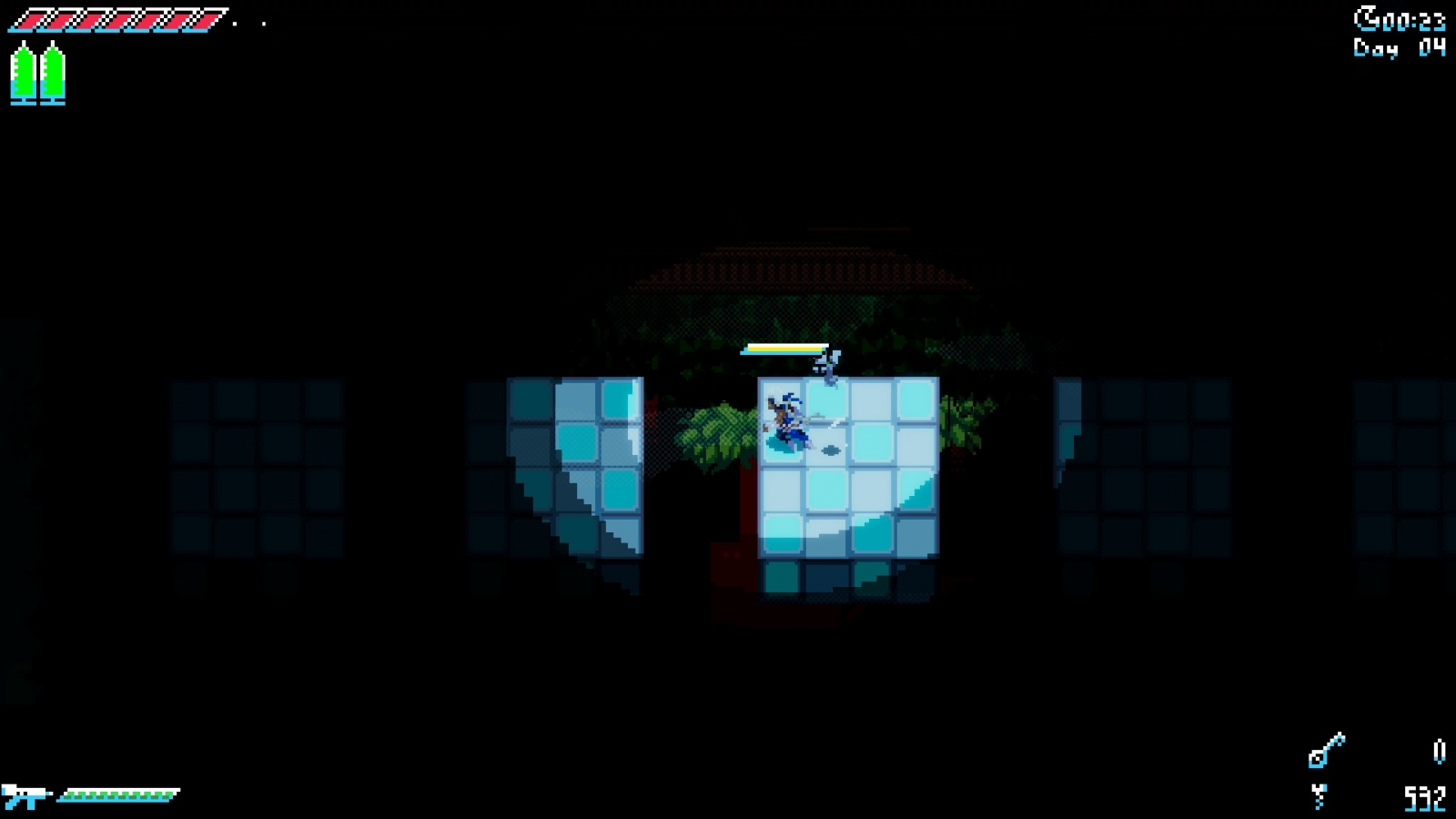 As mentioned previously, the entire map including dungeons is fully interconnected and explorable once you finish the prologue. Thankfully, navigation is a breeze thanks to generous teleport points and a clearly color coded map. My only complaint about the world design would be that it can be a bit too secretive at times. After beating the game, I read online that apparently there’s a true ending you can get by fulfilling certain criteria. This isn’t even hinted at in the game itself and requires some very specific steps that I would never think to try. Aside from some odd writing throughout the game, I found the normal ending satisfying enough, especially if you manage to keep everyone alive, some indication that this exists would have been nice.

Once you finish the main story, there are still a plethora of other modes and game types to try out. First off, the entire game is playable in co-op! I didn’t really get to try this out, being on PC with too crappy an internet connection to use Steam’s Remote Play Together, but I definitely want to do another run with a friend sometime. By beating the main story, you also gain access to New Game + and New Game Extra. New Game Extra gives you all the crafting blueprints right at the start, while New Game + is more traditional and carries over all items and stats. Lastly, there are two rogue-like modes: Dungeon Raid, which has you run through randomly generated dungeon areas collecting weapons and items to increase your survivability; and Boss Rush, which has you face off against every boss to gain new equipment and reach the end. Both of these feel like a nice compliment to the main game, and have various options like permadeath to customize the difficulty. The only other mode I could want would be a Randomizer for the main story, but even without that I enjoyed this game so much I might just double dip on Switch to have the game portably. Unsighted is a must play title and I’m shocked more people aren’t talking about it.

Unsighted is this year’s best Metroidvania/Zelda-like game by a long shot. It’s creative, gripping, and accessible with a ton of stuff to do and see. There are a few small issues, like some awkward writing or too much menuing, but those are well worth it for such a fun, polished experience.

David is the kind of person to wear his heart on his sleeve. He can find positives in anything, like this is a person who loved Star Fox Zero to death. You’ll see him playing all kinds of games: AAAs, Indies, game jam games, games of all genres, and writing about them! Here. On this website. When not writing or playing games, you can find David making music, games, or enjoying a good book. David’s favorite games include NieR: Automata, Mother 3, and Gravity Rush.
Related Articles: Indies, Unsighted
Share
Tweet
Share
Submit