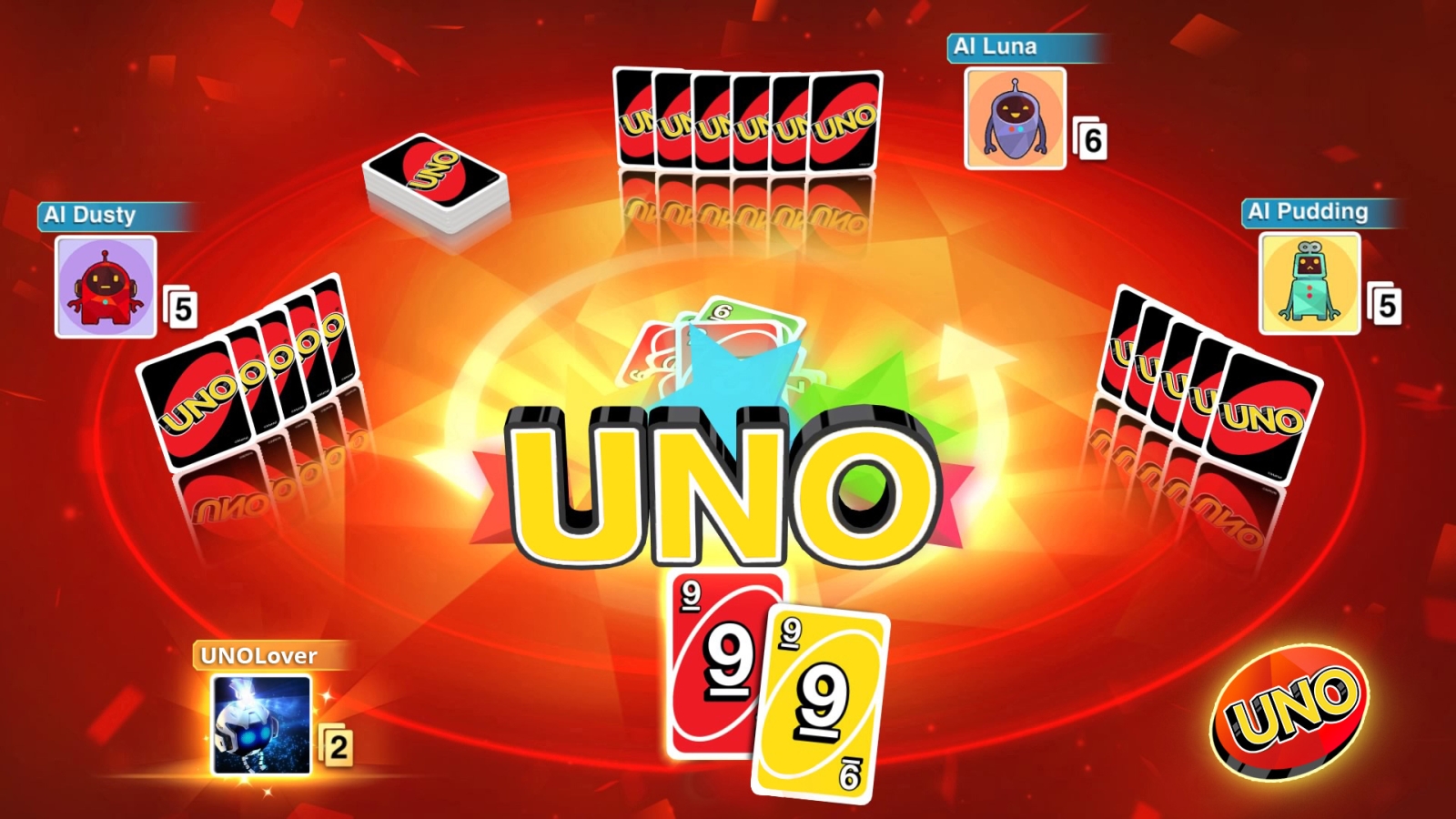 Skyrim, Super Mario Odyssey, Legend of Zelda: Breath of the Wild — there are some HUGE titles out for your brand new Nintendo Switch. That said, there are always a handful of titles you need to take with you, simply because this little portable is meant to play with friends. UNO was one of the first Xbox 360 titles I played, and now Ubisoft has brought it back for another round for Nintendo’s new console. Let’s deal the cards and see if this is more Skip, Reverse, or the dreaded Draw Four.

For the purposes of this review, I’ll briefly describe the instructions for Uno, but I’ll also assume you’ve likely played UNO or something like it (looking at you, low-rent Skip-bo) in your lifetime. Each player is given seven cards, with the remainder landing in the draw pile in the center. As a single card is flipped over in the center to start play, it’ll fall into one of four colors, and they will be numbered. Your job is to play a card in that same color, or flip it to a different color by playing another card with the same number. If you don’t have a card in your hand to do either task (excluding the specials – more on those in a moment), you’ll have to draw a card. If you happen to get either the right color or number, you can play it immediately, otherwise play continues to the left. When you’ve whittled your card count to one, you must shout “UNO” due to your intense love of the number one, and because other players will make you draw two more cards as punishment for your egregious oversight should they catch on before your next turn.

Rayman and friends have special cards to “switch” things up.

With the basics in hand, there are several special cards that do precisely what’s printed on them. Skip makes you skip the next player’s turn, reverse flips the direction from clockwise to counterclockwise, and draw two makes the next player in line snap up two more cards. All of these have a color associated with it, and can have colored cards played on top of them. They also have the title of the card as an attribute, allowing another player to use a skip on top of a skip, as an example. The last type of special cards comes in two flavors – Wild, and Wild Draw Four. Wild lets you change the current card to any color you want moving forward, excluding the color already being played. Wild Draw Four lets you do the same thing, but allows you to slap the next person in line with an extra four cards for looking at you funny that one time. If they’ve bluffed and could have played the current color, you can challenge them and, if you are right, they have to draw four instead.

Winning is simple. Once somebody plays their last card, you tally up the point values for everyone’s cards that they have left. Numbered cards are worth their face value, action cards are worth 20, and those tide-turning wild cards are worth 50 a pop. The first person to hit 200, 300, or 500 points wins. There’s also an option for laying it all on the line with a single round. It’s a simple game that probably exists in some form or another in nearly every American household. That said, every household likely has house rules that they use to mod the game. UNO on the Switch has six house rules that you can activate, letting you change things up, including a few I’ve never heard of before like 7-0, which lets you swap out your hand if you’d like when you play a 7, or playing a 0 to pass your hand to an opponent.

Taking this game digital has several advantages and a few drawbacks. The first and most obvious is that the game features Ubisoft characters from the Just Dance, Rabbids, and Rayman franchises (sorry folks, no Sam Fisher cards), making it extra cute. There are a few special cards in the themed decks to contend with that add new elements to the game. Explosive Results, for instance, makes the next player who draws a card for any reason draw an additional three cards. Hurry Up makes all players finish their round in three seconds or less, lest they be forced to draw a card and skip their turn. If you feel like one of the cards unbalanced the game, you can disable it, but I never had that feeling during play.

One of the arguments that always breaks out as UNO games goes on longer is “Augh! What direction are we going?!”. This game solves this with a constant rotation of arrows around the play space showing the current play direction. It’s a simple visual element that keeps you on track.

There are three modes for UNO – playing against the AI (1-2 players), jumping online (1-4 players), and locally connected console play (2-4 players). I tried multiple times to get an online game going, but could never find a lobby or match to join. That said, the local multiplayer has its idiosyncrasies as well.

Playing UNO is a combination of luck and skill. Having the right cards, and knowing when to play them is just as important as keeping them secret so you can spring them on your opponents. As a result of sharing a screen, your opponents can see your cards in local play. To combat this, you’d need to set up something more complicated (push the cards to a phone or something similar) but that would break the portability aspects and simplicity of the game. It’s a trade-off, for sure. There are also some odd long load times here and there, which is a surprise for a game that should be fairly zippy. It’s not quite “Draw Four” territory, but these things should have been picked up in QA, putting it squarely in the “Skip a Turn” zone.

Ron Burke is the Editor in Chief for Gaming Trend. Currently living in Fort Worth, Texas, Ron is an old-school gamer who enjoys CRPGs, action/adventure, platformers, music games, and has recently gotten into tabletop gaming. Ron is also a fourth degree black belt, with a Master's rank in Matsumura Seito Shōrin-ryū, Moo Duk Kwan Tang Soo Do, Universal Tang Soo Do Alliance, and International Tang Soo Do Federation. He also holds ranks in several other styles in his search to be a well-rounded fighter. Ron has been married to Gaming Trend Editor, Laura Burke, for 21 years. They have three dogs - Pazuzu (Irish Terrier), Atë, and Calliope (both Australian Kelpie/Pit Bull mixes).
Related Articles: Uno
Share
Tweet
Share
Submit