How do you follow up perfection? Spelunky by Derek Yu is widely considered one of the greatest roguelikes of all time. Its controls are tight, level generation makes for unique but familiar areas to master, and enemies are all predictable and consistent so each death feels like your fault. The 2012 version only improved on this, going from great pixel art to an adorable 2D art style and adding multiplayer, among other things. Spelunky 2 seeks to be a similar upgrade, but does it succeed in offering a similar experience? Or does it fail to understand what made the original so great?

Spelunky 2 takes place years after the original, with the daughter of Spelunky Guy, Ana, searching for her parents on the moon, where Olmec appears to have re-emerged. While the story is just an excuse for the gameplay, there is some neat art in the form of photographs which serve as a tutorial and to explain the backstory. The game plays exactly like the original: you’ll enter a randomly generated series of levels seeking to get to the exit at the bottom of each one. The moon’s cavernous interior is filled with new enemy types you’ll need to whip or jump on, walls you need to bomb, and holes you’ll have to rappel down with your trusty ropes. Everything you’d expect to find is here: easily angered shopkeepers, a variety of items to utilize, characters to find and unlock, secrets to discover, and spiders hiding in pots. It’s the first game, but with more content. 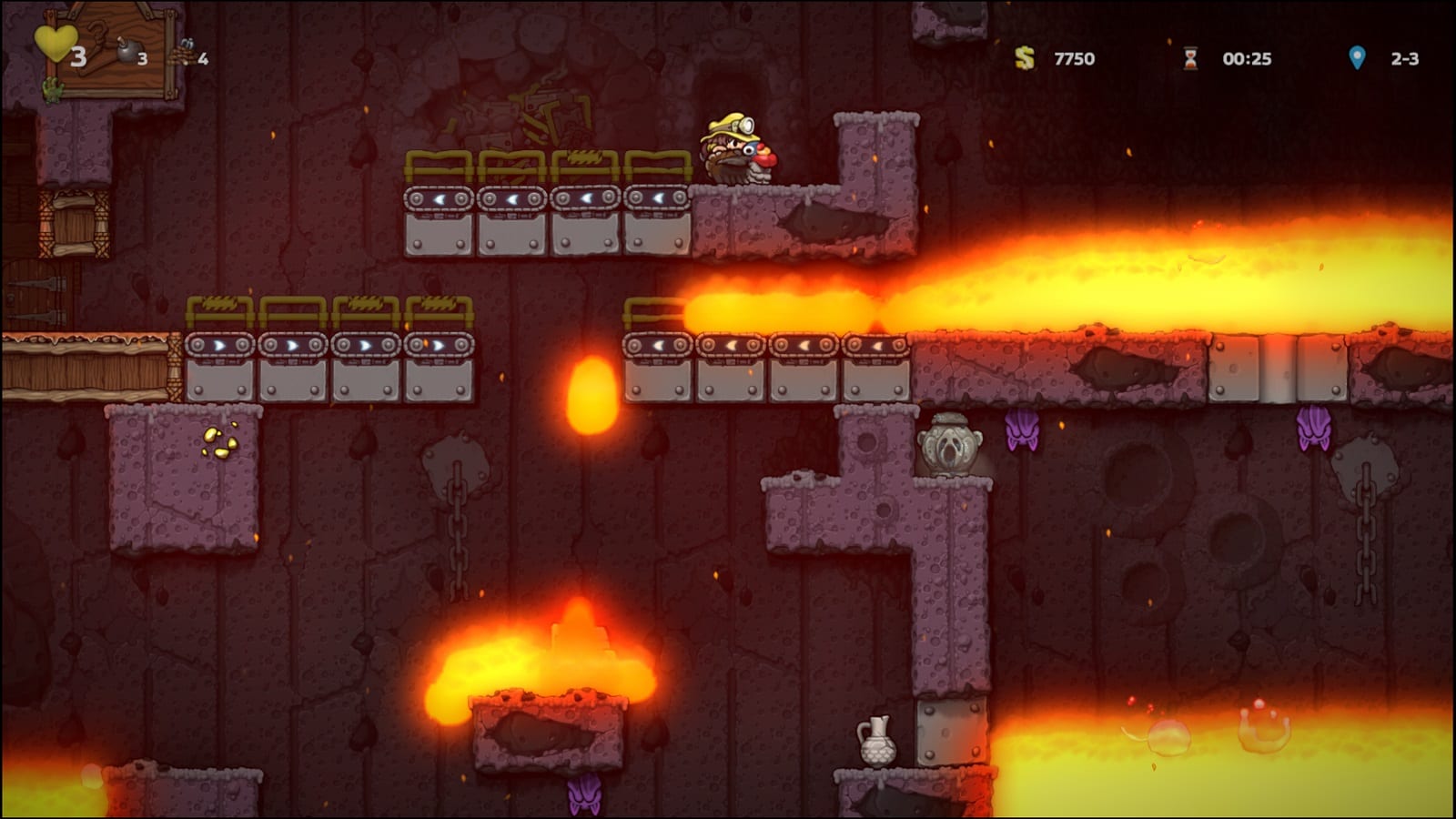 The two new things that stick out the most are the new enemy types and new progression system. At the end of each world (which is about 4 stages, with an optional boss somewhere in there) you’ll find two exits instead of the usual one. Both lead to different biomes with their own aesthetics and mechanics; for example, finishing the caves will let you access either a jungle area or more caves… but with lava. This really helps with the repetition so common in roguelikes, since if you don’t like or get tired of one area you can try the other route instead. Personally, I’ve always hated the jungle levels with their spikes and money-stealing-monkeys, so I’ve avoided it in most runs, though the lava zone is equally difficult.

Where Spelunky 2 starts to deviate from the perfection of the original is with the new enemy types. Most of them feel unpredictable and unfair as a result, like the rolling enemies you’ll find in the Caves – they can take three hits to kill, charge at you from off screen, and continue to damage you while you’re stunned. I can’t tell you the amount of runs I’ve had ruined with these things just coming out of nowhere, sometimes immediately after starting. While there are a few that fit right in with the predictability of the OG baddies, most follow this trend of completely blindsiding you or killing you instantly. It doesn’t matter how carefully you play anymore if something can destroy all your progress in an instant like this, which makes the single-player mode far more frustrating and less fun than it should be.

Multiplayer, conversely, is where Spelunky 2 truly shines. It doesn’t matter as much if one of you dies unfairly if the others can just continue on and revive you in the next level. Being dead also has its advantages this time, ghosts can still interact with objects with their breath but also freeze enemies for an instant kill by charging it up. It makes the more artificial difficulty more tolerable and fun, even if it’s hard to get very far with a dysfunctional team. I went in expecting the refined experience of the original, but after playing it I think Spelunky 2 is trying to be more of a party game. It even has online multiplayer, which was unfortunately unavailable for us to try out.

If you can get your friends to stop trying to murder the shopkeepers every run, Spelunky 2 is a blast with other people. Instead of feeling frustrating, the constant unfair deaths only add to the comedy of your team bumbling about. The other new mechanics, like mounts and the ghost arriving after breaking a certain pot, feel like they’re designed for chaotic cooperation as well. For example, if one player is riding a turkey and the other is carrying a doggo while the third accidentally sends lava the other two’s way by stealing a golden idol, at least they get an extra heart out of it with the freshly cooked turkey dinner. When playing with others, the most frustrating thing ends up being the camera. The first player is always carrying a flag, which marks them as the leader and the action follows them exclusively. You’d think this would incentivise players to stick together and cooperate, but it’s actually the opposite because of the friendly fire. Hopefully online gives everyone their own perspectives, but local could really use some sort of split screen or the ability to turn off friendly fire.

While Spelunky 2 doesn’t offer the refined mechanics and enemies of the original, it does add to the chaos and fun of multiplayer. While playing alone is mostly an exercise in frustrating, unfair deaths, with friends it’s a barrel of laughs.

David is the kind of person to wear his heart on his sleeve. He can find positives in anything, like this is a person who loved Star Fox Zero to death. You’ll see him playing all kinds of games: AAAs, Indies, game jam games, games of all genres, and writing about them! Here. On this website. When not writing or playing games, you can find David making music, games, or enjoying a good book. David’s favorite games include NieR: Automata, Mother 3, and Gravity Rush.
Related Articles: Indies, Spelunky 2
Share
Tweet
Share
Submit