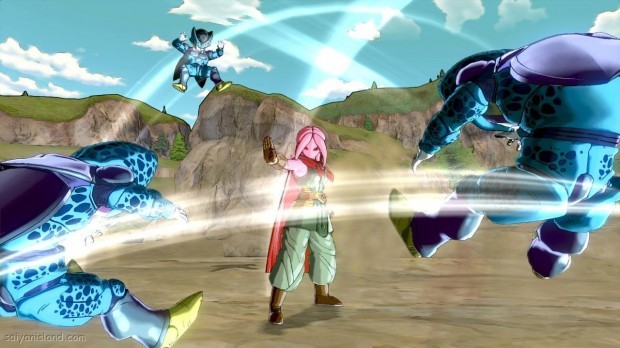 Namco Bandai has been releasing Dragon Ball series games for almost as long as the series itself has been around. The manga debuted in 1985, and less than a year later the first game was released. Since then, dozens of games have found their way into the hands of fans, but none more ambitious than Dragon Ball XenoVerse. Dragon Ball Xenoverse takes the Dragon Ball Z experience and flips it on it’s head by creating a MMO experience that alters the most famous events in the Dragon Ball Z chronology.

In Dragon Ball Xenoverse, two mysterious figures are traveling through time and altering the events of the Dragon Ball Z Universe to the detriment of our heroes. You’ll see Goku defeated by Vegeta in their first fight on Earth, and Perfect Cell succeed in his ultimate goal of controlling the Universe. As a member of the Time Patrol, players are tasked with intervening to set things back to their proper canon.

Creating a character is by far the most unique and enjoyable part of the game. Players will choose from multiple races and genders, and each character looks and feels like they belong in the Dragon Ball Z Universe. Additionally, players can learn new combat abilities and level up their own powers, which provides for a sense of progression and customization unlike any Dragon Ball game to date.

Unfortunately, beyond the setup for what could have been the definitive Dragon Ball Z video game that fans have been waiting for, it falls a few Dragon Balls short of a Shenron-summoning. This begins with the online experience, which is shaky at best, and broken at its worst. It begins when you try to install the game, a process which takes multiple attempts and several hours on all the platforms I attempted it on–In my case, the PS3 (which never worked) and XB1 (which worked after multiple attempts) were both frustrating experiences to say the least.

Once the game finally gets running, the player is immediately faced with the terrible online experience, which is so unstable that I’m convinced their server is an unpeeled potato. I was never able to connect to the Xenoverse Server and wander around Time Patrol HQ with other players socially. In fact, sometimes the game wouldn’t let me play at all, even offline, and I had to simply wait for hours before it was working well enough for me to play at all. The only time I was able to interact with other players was during one-off co-operative missions or versus modes, which ran fine, but after the session was over, I was immediately taken back offline for a single-player experience. Were it not for these issues, I’m confident my experience would have been greatly improved. Unfortunately, Dragon Ball Xenoverse fails to do what games like Phantasy Star Online was able to accomplish in the days of the Dreamcast.

The combat in Dragon Ball Xenoverse also falls short, unfortunately. While there are a wide range of fully customizable “special” and “ultimate” abilities, these make up for a minority of the gameplay, as you’re required to charge you “KI” (effectively mana), in order to use these abilities. In the time between using these abilities, the player is simply mashing the attack buttons in a series of repetitious flurries. This tends to get boring really quickly, but I have to admit that using my special customized abilities did compensate for this shortcoming quite a bit. Were I able to mix and match my core attacks to different styles and attack patterns, I probably would have been 100% sold on the gameplay. Instead, I was left to use the same attack pattern again and again until I charged up for a special ability, which is disappointing.

Overall though, Dragon Ball Xenoverse is still the best Dragon Ball game to-date, and once the online issues are resolved, it could very well be a much better experience. As of now, however, it is simply too sporadic to recommend. I actually postponed my review hoping that the online functionality would be fixed in the days following the launch, but no such improvements occurred.

Dragon Ball Xenoverse is excellent fan-service and has a ton of potential, which makes it frustrating as hell to see it held back by technical issues and repetitious combat.

You know that jerk online that relentlessly trash talks you after every kill? That guy was probably Travis "Tie Guy" Northup. Competitive, snarky, and constantly wearing a tie, Travis has been writing his opinions about electronic media since he was a teenager, and is pretty much the only person to hold his opinions in high regard.
Related Articles: Dragon Ball Xenoverse
Share
Tweet
Share
Submit