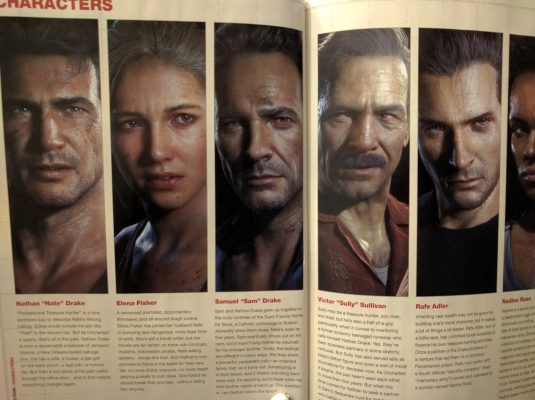 Uncharted 4: A Thief’s End is an absolutely amazing game, as you might infer from the perfect score bestowed by Gaming Trend Editor Kenneth Shepard in his review. While the game is still a linear adventure, there is so much to discover, with secrets around every corner. I don’t often get to play games more than once, and I hardly ever get to find all of these nooks and crannies, so I thought this time around I’d get a little help finding everything Naughty Dog has crammed into this incredible adventure. For a game so highly praised, I decided to check out the Collector’s Edition of the guide from Prima Games.

The Collector’s Edition of the guide of Uncharted 4: A Thief’s End is a gorgeous 336 page hardback book, filled not only with secrets and strategies, but also fantastic artwork. Opening with a bittersweet introduction from Josh Scherr, Naughty Dog writer for Uncharted: Drake’s Fortune, Uncharted 2: Among Thieves, and Uncharted 4: A Thief’s End. In it he covers the rollercoaster of emotions in writing such an engaging game while always knowing that it’s also the end of Nathan Drake’s adventures. He also talks about the journey that he and the team at Naughty Dog went through during the creation of the Uncharted series. It creates a connection with the reader that is more often reserved for an art book than a guide.

A great cross-section of the characters.

Before digging into the 22 chapters of the story, plus the prologue and epilogue, the Prima Guide provides the larger beats covering the story thus far from the first Uncharted through the third. It’s a good primer, though nothing beats picking up the Nathan Drake collection your PlayStation 4 and experiencing it for yourself.

As Kenneth discussed in his excellent review of Uncharted 4, the levels in A Thief’s End is are much larger in scale, offering multiple branching paths and traversal options. The game also puts a heavier focus on redesigned espionage and stealth elements. All of this makes for a guide that is much harder to write, but Prima has done a solid job here. While there are certainly linear elements in Uncharted 4, often there is also freedom to choose your own path.

To tackle the branching nature of Uncharted 4’s traversal systems, Prima instead focuses on what they believe is the most optimal path. As you can see below, they’ve used a color-coded arrow system to suggest the best way to tackle something like ascending to the roof and then reaching an adjacent building. When it comes to the stealth and espionage elements, this is especially useful as not all vegetation obfuscation is as helpful as the next.

The optimal path is showcased clearly.

Uncharted has always had collectable treasures, and A Thief’s End is no exception. In this guide are illustrated call-outs showing where you can uncover these hidden gems, baubles, and bits of the past. Most of the time, the guide is helpful in showing exactly where you might rummage around to find the lost artifacts, but there are a few occasional stumbles. Sometimes the wording of the area description is awkwardly written, or coupled with pictures that seem bafflingly small or pulled too far out, making it hard to get more than a general idea of where to search. In most cases it’s enough to get in the general vicinity, but there were a few head-scratchers here and there.

On the flip side, there is also a full table of these same collectables, organized by type, how it’s obtained, and what the requirements are (e.g. higher difficulty levels) for retrieving them. They are broken down by chapter, which can be helpful for making sure you’ve gotten all of them before proceeding.

Collectibles are there for the taking.

If you are a completionist, you are obviously also a trophy hunter. If you want the Platinum Trophy, you’ll need to also complete the game speedrun style. If that’s your thing, there is a handy guide here that tells you which areas you can simply run through, what’s skippable, and which areas won’t let you proceed until you wipe out all of your foes. Handy if you have to have that last award in your showcase.

The highest difficulty level in Uncharted 4: A Thief’s End is called “Crushing Mode,” and it is aptly named. I was surprised to see that in this guide there isn’t a single strategy for tackling this challenge. The book (and eBook version) describe the mode, but then simply pawns players off to re-read the basic movement guide as a general strategy. I imagine most folks won’t be playing on this difficulty, so I can understand applying only the smallest amount of effort here, but this section feels a little barren.

Multiplayer gets a quick peek at maps and modes.

Included in this guide, as well as the regular edition, is a code to redeem for an electronic version of the guide. Tables split by chapters become searchable thanks to the electronic format. It’s very handy as you can subsect your collection efforts into individual chapters, or see which items and trophies can only be collected on the highest difficulty levels. It makes for a solid second-screen experience if you are the type that doesn’t want to accidentally damage their Collector’s Edition guide.

Speaking of collecting, a pirate sigil coin plays a role in the story of Uncharted 4: A Thief’s End, and a replica of that coin comes with this guide. The coin is a fantastic bonus, made of either a heavy pewter or steel. The full size coin has a heft to it, is very sturdy, and highly detailed, making it a worthy collection item for any series fan.

Far more detail than I expected.

Hardbound and chock full of strategies, the collector’s edition Prima guide for Uncharted 4: A Thief’s End provides everything a would-be adventurer could need to find every treasure possible. While some of the treasure guides could be bigger or better defined, it should get you close enough to find what you need. The included coin is high quality and could find a home in any collector’s shelf.

Ron Burke is the Editor in Chief for Gaming Trend. Currently living in Fort Worth, Texas, Ron is an old-school gamer who enjoys CRPGs, action/adventure, platformers, music games, and has recently gotten into tabletop gaming. Ron is also a fourth degree black belt, with a Master's rank in Matsumura Seito Shōrin-ryū, Moo Duk Kwan Tang Soo Do, Universal Tang Soo Do Alliance, and International Tang Soo Do Federation. He also holds ranks in several other styles in his search to be a well-rounded fighter. Ron has been married to Gaming Trend Editor, Laura Burke, for 21 years. They have three dogs - Pazuzu (Irish Terrier), Atë, and Calliope (both Australian Kelpie/Pit Bull mixes).
Related Articles: Uncharted 4: A Thief's End CE Prima Guide
Share
Tweet
Share
Submit