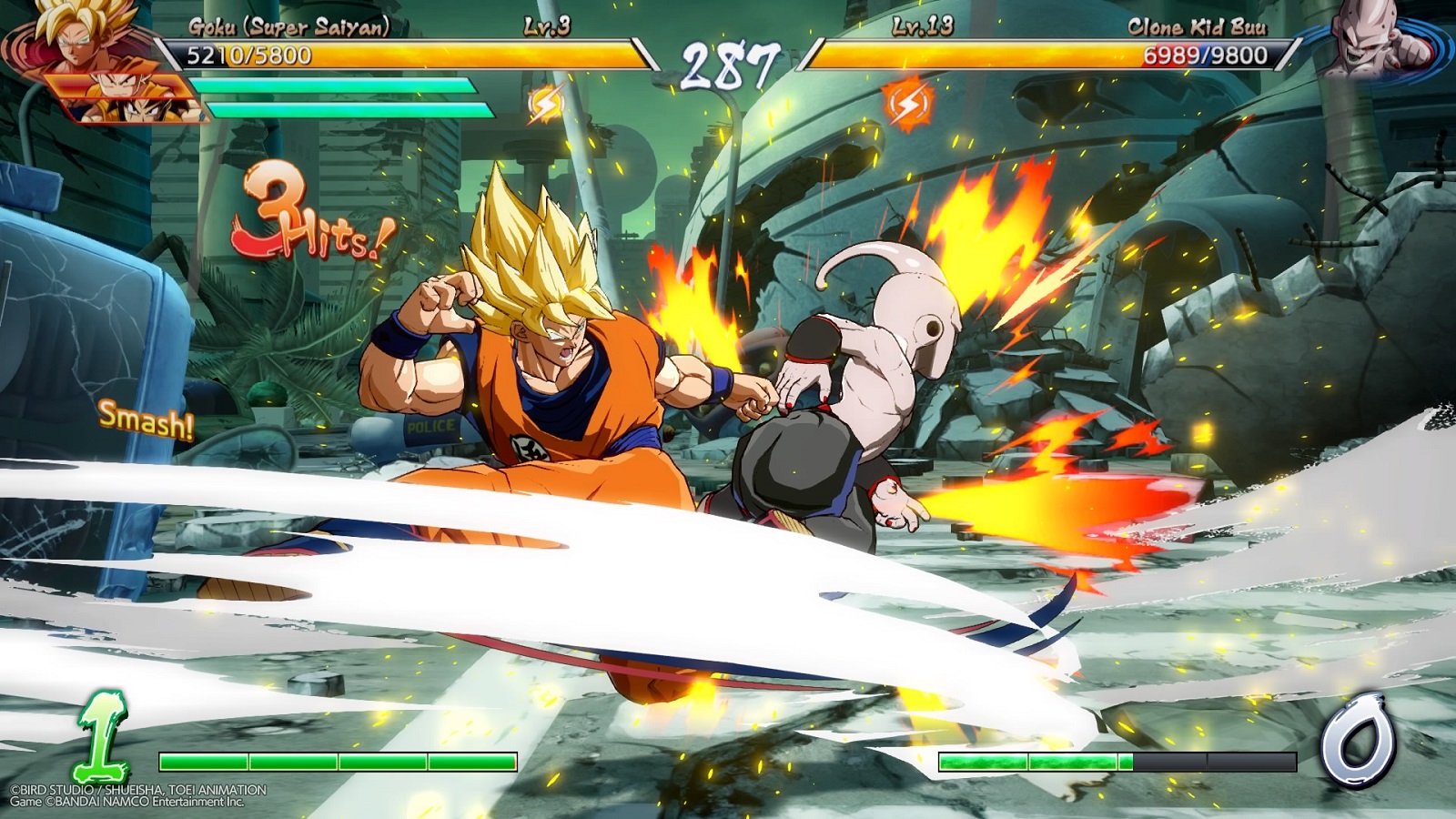 It’s hard to argue that the Dragon Ball series isn’t one of the most popular anime franchises to make its way to the west. Every year since 2002, a new Dragon Ball game, often based on Dragon Ball Z, has been released in some form. Last year, Bandai Namco released the Nintendo Switch version of Xenoverse 2, and like most Dragon Ball games, it focused on 3D arena-style battles rather than 2D face-to-face combat. Occasionally, a 2D title such as the Butoden series makes its way through. Dragon Ball FighterZ, however, is a tag-team 2D fighting game based on the franchise, and a damn good one at that.

Not a stranger to fighting games, Dragon Ball FighterZ is developed by Arc System Works, the company behind Guilty Gear (in fact, it runs on the same graphics as Guilty Gear Xrd). While most of the Dragon Ball games were focused on 1vs1 battles, Dragon Ball FighterZ is a 3vs3 tag team battle, similar to Ultimate Marvel vs Capcom 3. You have attack buttons for light, medium and heavy attacks, but also a button for special attacks (most often Ki, or energy blasts), buttons for special guard breaks, and buttons for assisting and switch out your teammates.

Prior to FighterZ, I had not delved into the world of tag-team fighting games, but this game was really simple and friendly to newcomers. There is an in-depth tutorial to help teach you the basics that can be done in under an hour. If that’s not enough to bring in newcomers, the gameplay itself is extremely friendly with casual players.

One of the mechanics of the game are “auto combos,” where hitting weak attack in succession will automatically allow the player to combo against the other player, unless they’re able to cancel out of it of course. Having mechanics like this allows the casual player to pick up the game more easily, but this doesn’t mean that the game is too simple.

For fighting game veterans, Dragon Ball FighterZ hides a deep learning curve full of different combo potentials that are tough to pull off. For example, there is a different in air momentum when manually jumping versus jumping auto combo chains that changes the way combos work. There are plenty of options found daily by the Dragon Ball FighterZ community.

Despite being a multiplayer focused fighting game, Dragon Ball FighterZ never felt like there was a shortage of things to do. One of the main focal points is of course, the story mode. Unlike previous Dragon Ball games, FighterZ doesn’t focus on retelling the same arcs we’ve seen in dozens of games. This time, it follows a new plot that takes place sometime after the Universe 6 arc of Dragon Ball Super.

In FighterZ’s story mode, several clones of characters have popped up after mysterious energy waves have interfered with the fighters. In a clever way to integrate the player, the characters have to be “linked” with the player, leading to interesting inner monologues where the player themselves are addressed. All of these story segments are told through 3D animated cutscenes voiced by almost all of the current voice actors from Dragon Ball Super in both Japanese and English.

While the overall gameplay is excellent, the story mode’s gameplay can get repetitive at times. You move your characters onto a map and fight different clones, or in some rare cases, enemies from Dragon Ball history. Some of these spaces will reward you with items you can equip that’ll buff your stats such as special attacks or healing between rounds, or they can contain allies to unlock. There will be special events that trigger such as Kid Buu completely taking over a space or special cutscenes if you have the right team selected. But the core of this mode is simply fight enemies to level up your fighters, make it to the boss, fight the boss, watch a cutscene that progresses the story

Another surprising aspect of this story mode is its sheer length. The first arc you have available, Super Warriors Arc, will follow Goku and his friends through the story. After you’ve completed one arc, you can see the same arc from a different point of view to fill in the gaps. There are hours of cutscenes available in this mode alone, and the story feels true in tone to Dragon Ball Super, which is a treat for the anime’s fans.

Story mode isn’t the only mode this game has to offer. In Arcade Mode, you pick your team and play through either three, five, or seven stages. The higher you rank in each stage determines the difficulty of the next stage. This ensures that less experienced players will stay at a lower, more comfortable level while experienced players are sent to the high road. If this wasn’t enough, there are harder versions of each set of stages. Winning in arcade mode earns you Zeni, which can be used on Dragon Ball FighterZ versions of loot crates.

There’s no need to worry, Zeni cannot be bought with real world money. When you use Zeni on capsules, you are given a random item that can vary between special colors for characters, lobby avatars, lobby stickers, and more. If you happen to come across a duplicate, you are instead given a Premium Z Coin. Ten of these coins can be traded in for an item of your choice. As these rewards are purely cosmetic and I don’t feel like the game is taking advantage of my wallet to look cooler, capsules are often an exciting experience.

There are two characters players can unlock using real world money, the Super Saiyan God Super Saiyan versions of Goku and Vegeta. However, there are several ways to unlock them including having a Day One Edition code, purchasing the unlock code for $2.99, or unlocking them under certain conditions such as completing certain arcade mode matches with an A rank. With how many options there are to unlock these two heroes, I can’t fault the game for giving players an easy route for those willing to pay.

Aside from casual matches with strangers, FighterZ features a ranked mode. This is where the experts play and if you’re like me, you’re sure to be knocked down a peg. During my time playing, I didn’t find any issues with lag, but setting up Ring Matches, the only way to fight against friends online, has an issue connecting to friends, often displaying a message that the “room cannot be found.” However, Bandai Namco is aware of this and working on a fix.

Another charm for Dragon Ball FighterZ is how much effort went into the little touches. As matches begin, having certain characters open the match on certain stages will lead to a dramatic intro, such as the infamous scene of Krillin being murdered by Frieza on Namek which lead to Goku’s first Super Saiyan transformation. While players are fighting, the ground will become damaged with each hit and will stay that way for the duration of the match. If “easy combos” are performed, the players will collect a Dragon Ball. If all seven Dragon Balls are collected, the first player to reach maximum power and complete a light easy combo will summon Shenron. If a player knocks out one of their opponents fighters, they will be knocked off screen into a building, or into a new location entirely.

Finally, there are dramatic finishes. If you have a character beat certain final fighters with a neutral heavy attack on a specific stage, you will trigger a dramatic finish. Like the special intros, these highlight key moments in Dragon Ball history. One of these, when done as Teen Gohan against Cell in a destroyed Cell Games Arena, will have Teen Gohan do his special father-son Kamehameha to destroy Cell once and for all.

These little touches are what makes Dragon Ball FighterZ stand out. The special movies don’t drag on too long, the dialogue changes depending on who is fighting who, and there are already a wide variety of options fans can use against their opponents. Arc System Works have outdone themselves in a well-packaged tag team fighter.

Dragon Ball FighterZ is a near-perfect fighting game that appeals to casual players without alienating veteran fighters. The dramatic finishes are a nice touch, the story is amusing and lengthy, if not repetitive at times, the visuals are beautiful, and there is enough content to satisfy any Dragon Ball fan itching for a good fight.

Sean Anthony likes to combine two of his passions: gaming and writing. Gaming has been a huge part of his life ever since he played his first game as a child, Kirby's Adventure. He aspires to have his name attached to an article that makes the whole world go, "Huh, that's neat, I guess."
Related Articles: Dragon Ball FighterZ
Share
Tweet
Share
Submit