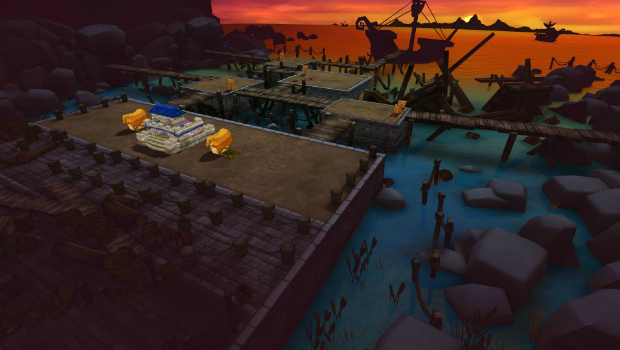 It was during that most disgusting era of human history, the Middle Ages, where the famous Genghis Khan used catapulted bubonic corpses to spread the plague into the cities and castles that the roving conqueror  intended to take.  While that option strangely never shows up, you can instead spend some time shooting arrows and casting lightning onto the undead in The Castle Game, a passable tower defense game and winner of the Incredibly Literal Title award.  While the battles in-game will prove much less offensive and exciting action than those of the real-world Middle Ages, they can at the very least waste an afternoon or two on some solid old-school fun.

In The Castle Game, you start with a small base and an area for building broken into squares.  The object of the game is to build up protections like walls, archers, soldiers, and traps so that waves of attackers cannot break through and destroy your base.  Each round you have a certain number of gems that allow you to build these protections.  Killing enemies and defeating waves will provide you with more gems each round.  Live units, such as archers and soldiers, require food to exist, and food is gained by building farms.  Other structures, such as the forge, provides the player with extended building and recruiting abilities.  Each round you build more and more, and try to protect your castle from damage with each increasingly difficult wave of enemies.

During the battles, the player is given a few God-like powers to thin out the oncoming horde.  You can place reinforcements which periodically spawn two soldiers who will fight for you.  You can focus the attacks of every single soldier unit in your squad on one strong enemy, and you can also blast the battlefield with a strong burst of lightning, killing off weaker enemies with one strike and providing a powerful drain on the life bar of strong enemies.  You can also repair the walls of the castle as you are being attacked.  The Castle Game demands a balance of offense and defense throughout each wave, and it is hands down the most interesting feature of the game.

While the game excels in its execution of gameplay, it lags behind in terms of variety and dynamic experiences.  The maps take on different shapes and characteristics but end up playing basically the same.  Enemies are varied enough, but they are not very detailed and move in boring, static patterns.  The hit detection is not always correct, and sometimes entire blocks of your walls will be collapsed even when they aren’t being hit directly.  There seems to be little rhyme or reason as to when a wall is attacked as a single unit or as a group, and I’m not certain that this isn’t just an oversight.  This game isn’t anywhere near broken, but it definitely leans towards boring.

The design of the game fits well into that boring, uninspired mode.  It is hard to describe the particular brand of bland that the game is designed with, but the title basically sums up how much effort was put into the presentation.  The levels are bland, the detail is low, and the whole thing just feels slapped together.  It plays so well that all of these problems can be ignored, but they still affect the overall product and cast a poor light on the game.

The Castle Game is a game focused on castles, and the protection thereof. The gameplay is exciting and works excellently, but it’s unfortunately lost on a backdrop of boring maps and ugly design. The Castle Game is a worthy title for the outright fun of the battles, but overall you may just want to revisit some of your old favorites instead.

Patrick Rost has been with Gaming Trend since 2013. At first focused on sports coverage, Patrick has gone on to cover a wide range of games and other products for the website. Outside of Gaming Trend, Patrick writes and records music, grinds perpetually in Elder Scrolls Online (PS4), and lives day to day with his two dogs, Bob and Stella.
Related Articles: The Castle Game
Share
Tweet
Share
Submit