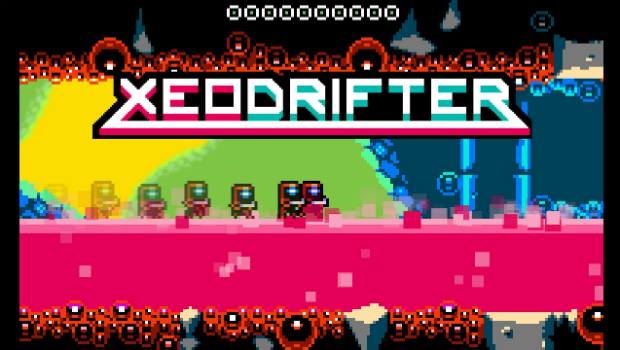 Lost out in the cold grippings of space, left with only a laser pistol and a limited health support system, most beings would crumble to frightened pieces and remain there until their rapid deaths.  Gamers may contend that years of experience in simulated space would harden them to the reality version, but don’t be fooled.

While most of us wouldn’t even make it through a hitchhiking trip to Phoenix, that won’t stop gamers from enjoying placing themselves into that everlasting vacuum of space and seeing how long they can survive.  In Xeodrifter, an incredible platforming experience from Renegade Kid, survival may not last long, but the enjoyment certainly does.

Xeodrifter is a 2D space adventure game in the vein of classic platforming games like Metroid.  You play as a little space explorer, stranded in an open zone between four planets.  An impact with a meteor has blown out your core needed to travel at warp speed, and you must find one somewhere on the surrounding planets.

Each planet is it’s own level, and you can choose to go to any of the four at any time, but you’ll quickly find that some of the world’s levels are not playable until some future powerup is earned.  Once you find the correct planet to start with, the game plays very admirably.  Your character is fast and can jump high, and you have a laser pistol with infinite ammo, so it’s all very standard fare for a 2D platformer /adventure.  The levels scroll well with your movement, the gun can hit even off-screen enemies, and a simple-yet-functional control scheme makes for a classic and familiar experience that requires very little learning.

As you progress through the levels and defeat bosses, you receive power-ups that provide you with a stronger gun and greater health capacity.  You are also rewarded along the way with new abilities such as the ability to turn into a submarine, shift between planes, and fly.  The plane shift ability allows you to shift between the foreground to the background and is particularly useful and interesting.  Thise ability expands areas of the map you’ve already explored, and makes you always keep your eye on the background for surprises.

While the mechanics are fun, the enemies are repetitive and some of them are too difficult to be considered a “fair” fight.  One particular insect creature can only be shot from directly below, but if you get under the creature it shoots a projectile that is too quick to dodge.  Even just passing by that monster is an automatic hit, and life is scarce in already.

The boss battles, which are just color variations of the same creature with expanded abilities, also have a problem with glitches and bugs. One boss in particular would shift planes and start to barrage my character with projectiles from above.  This would only occur once in some battles, but would repeat itself far more often in others.  I found a spot and sat there for a few minutes unharmed as he hurled projectile round after projectile round.  The game was almost broken at that point.  Through some creative tactics, the battle was able to be continued, but this definitely still poses a big problem for the overall product and takes away from the otherwise seamless experience.

The overall look and feel of the game is very nostalgia chic and looks and sounds fantastic.  The design of the levels is top notch, delivering easy navigation amidst a challenging experience.  The actual creative design of the enemies isn’t necessarily inspired, but overall the grade is more neutral than negative.  The music is 8-bit classical purity, and sounds very nice mixed with the era-friendly sound effects as well.  Nothing seems out of place or outrageous about the game’s nostalgic filter, and that’s exactly the experience the aging gamer craves.

Xeodrifter is a good game for fans of classic 8-bit platformers and adventure style games alike, providing a fun and challenging gaming experience that rewards smart playing and creative tactics. While the game suffers from a handful of glitches, the overall design and outcome of Xeodrifter is well worth a look for anyone in the market for an old-school experience in a brand new package.

Patrick Rost has been with Gaming Trend since 2013. At first focused on sports coverage, Patrick has gone on to cover a wide range of games and other products for the website. Outside of Gaming Trend, Patrick writes and records music, grinds perpetually in Elder Scrolls Online (PS4), and lives day to day with his two dogs, Bob and Stella.
Related Articles: Xeodrifter
Share
Tweet
Share
Submit