People have discussed the concept of the apocalypse for time immemorial. Whether it be thoughts about Y2K, the end of the Mayan calendar, a zombie outbreak, and many other versions, people have considered what might happen. One of the oldest, and more mythical ideas, is the apocalypse of Revelations. It’s said that the four horsemen of the apocalypse would appear before mankind and spread disease, famine, war, and death when their time comes. Preventing this event is the focus of God’s Trigger, and it does a great job of putting you in the role of saving the world.

God’s Trigger places you in the shoes of Harry the angel and Judy the demon, who both want to prevent the apocalypse for their own reasons. They conveniently end up in the same place at the same time and realize that their best bet is to team up. If you’re both trying to achieve the same goal, why not work together? They determine that in order to stop the apocalypse, they must seek out and defeat the four horsemen. Judy has a lead on Pestilence, so they begin to hunt him down. Without giving too much away, as you progress, the horseman that you’re currently dealing with will reveal the location of one of the others.

The gameplay is a top-down shooter, similar to Hotline Miami. Enemies die in one hit, with the exception of some foes who can take several. Unfortunately, you can only take one hit before dying, so you need to be incredibly careful. The one-shot life forces you to think strategically and plan out your attacks. Levels do have checkpoints, so if you trigger any you thankfully don’t have to restart entire levels. They typically correlate to reaching certain locations or defeating certain enemies. With how brutal some ambushes can be or how quickly you can get blasted, checkpoints are saving graces. 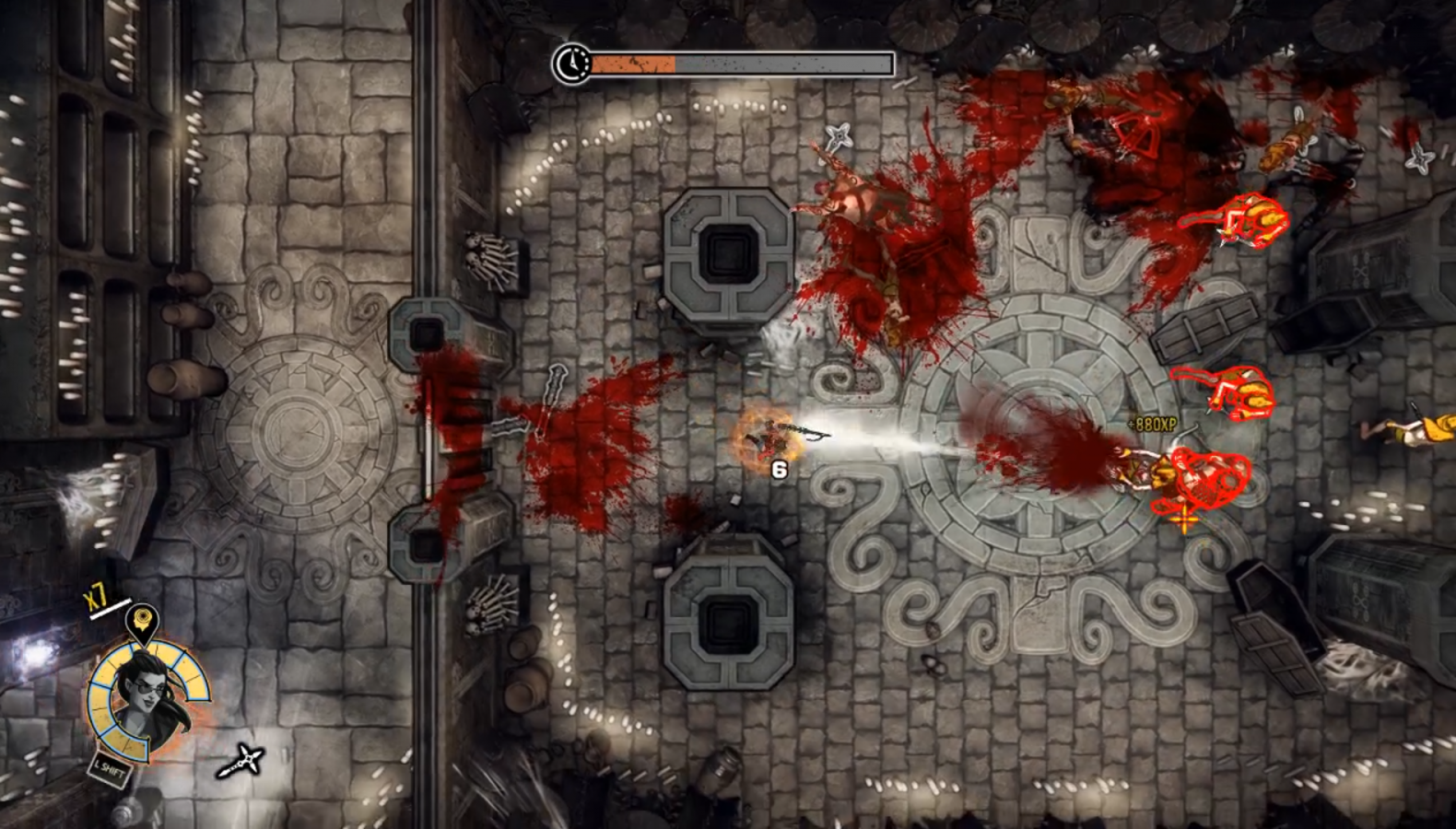 Even though you have two playable characters, you only play as one at a time. The cool thing is that you can swap between the two at any time with the press of a button. Harry and Judy each have their own melee attack, along with special abilities. Harry wields a sword and Judy launches a spear attached to a chain. The sword is more powerful, while the spear causes enemies to start bleeding out. The special abilities require energy to use, which is signified by a circular meter in the bottom left. Energy can be obtained by defeating enemies. Some of Harry’s abilities include turning invisible for a short time, slowing down projectiles around him temporarily, and sending out an air blast to knock down foes. Judy’s abilities include mind controlling an enemy to fight for you for a short time, sending out a vortex that sucks foes in, and creating clones to distract enemies. There more abilities, but these are the ones that I found the most useful, especially the invisibility and mind control. Each skill has its own cost, which is represented by its picture appearing next to said cost on the meter. For example, if mind control costs seven energy, the head symbol appears next to the seventh bar of the energy meter.

As you defeat enemies, you’ll earn experience and level up. Leveling up unlocks upgrades that can be purchased for your abilities. Unlike many games, you don’t get experience points to spend; in fact, each upgrade has a designated level that it unlocks at. Once unlocked, you are able to equip one of three options for that upgrade. In one case it could be between extra experience earned from a kill, increased range, or increased attack speed, while another upgrade could offer reduced usage cost, increased duration, or increased range. There are more aspects that can be offered, but those are just a few. If you find hidden perks in chests throughout levels, you can also equip a perk as well. Both characters have separate levels and upgrade trees, which is really nice and adds to their uniqueness. Best of all, upgrades aren’t permanent; you can change up what you’ve chosen in-between levels at no cost and with no consequence. Being able to adjust your abilities as you wish is incredibly helpful and allows for some fun experimenting, especially if you regret a certain choice. 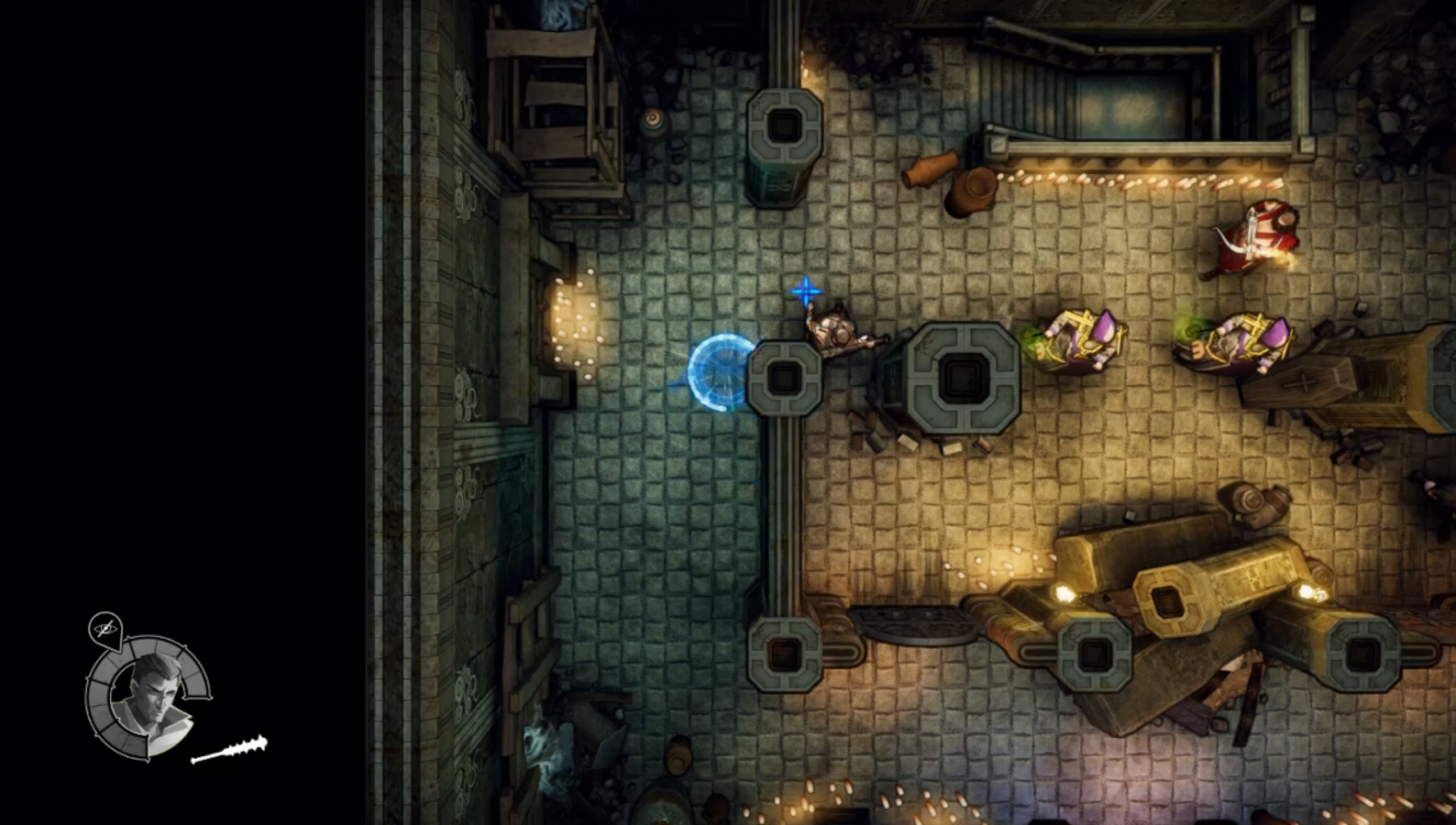 The game takes place over the course of a prologue and five chapters. The prologue is only two levels, while each chapter is about five levels (with one exception). The first four are regular levels, while the fifth is the boss fight. The regular levels are plenty of fun, even if they can provide some crushing deaths. The boss fights can be challenging, but once you discover their patterns, they only require some strategic playing. Even so, I enjoyed taking on each boss and learning their specific fighting style. Regular and boss levels alike have their own themes to them, making it more interesting to reach new areas. For example, you’ll be exploring a western setting early on, and then venturing through churches and catacombs later on.

The campaign only took about five to six hours for me to beat, but it was worth the time. As much as I enjoyed playing, I wouldn’t have wanted it to go on any longer. The story length felt like it lasted just as long as it needed to and didn’t drag on like some games. If you don’t want to stop, there’s also the arcade mode. Arcade mode lets you choose one of the stages that are in the campaign and play through them with a twist: instead of the normal setup, the enemies that appear are completely random. This offers a different experience every time you play, so there’s infinite replayability. The goal of an arcade mode stage is to kill all the enemies on the map instead of making it to a designated end point. So if you’re itching for some more murder, let your brutal flag fly in this mode. 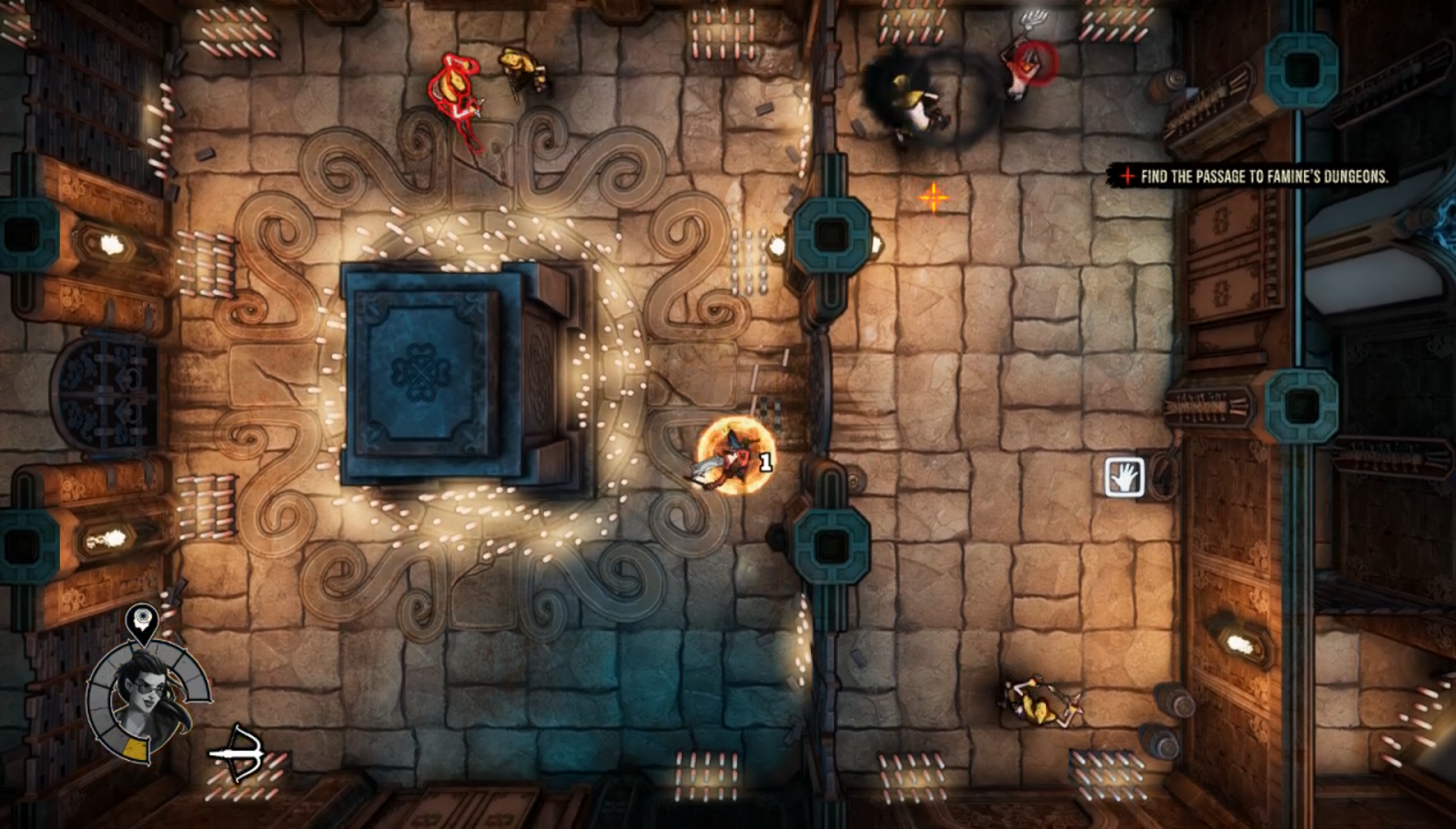 The gameplay itself is fast-paced and the kills are very satisfying. The soundtracks and level designs mesh together well to keep you engaged and the adrenaline pumping. The game does its best to keep you amped because it knows that letting your guard down could be your death. That being said, the game isn’t stressful; it causes you to plan and adapt, but not in a nerve-racking way. All in all, my time with Harry and Judy has been time very well spent. Working together with these two, even though they are from opposite worlds, was a treat that I hope many others get to experience.

God's Trigger is a fast-paced top down shooter in the realm of Hotline Miami, which brings with it some brutal deaths. The various abilities and ways to attack are fantastic. The story doesn't delve deep, but it does what's needed to keep you engaged.

Codi loves to play video games and watch movies. He will watch almost any kind of movie just to experience them. His ideas take inspiration from the shows and movies he watches, and games he plays. He also loves a good pun.
Related Articles: God's Trigger
Share
Tweet
Share
Submit