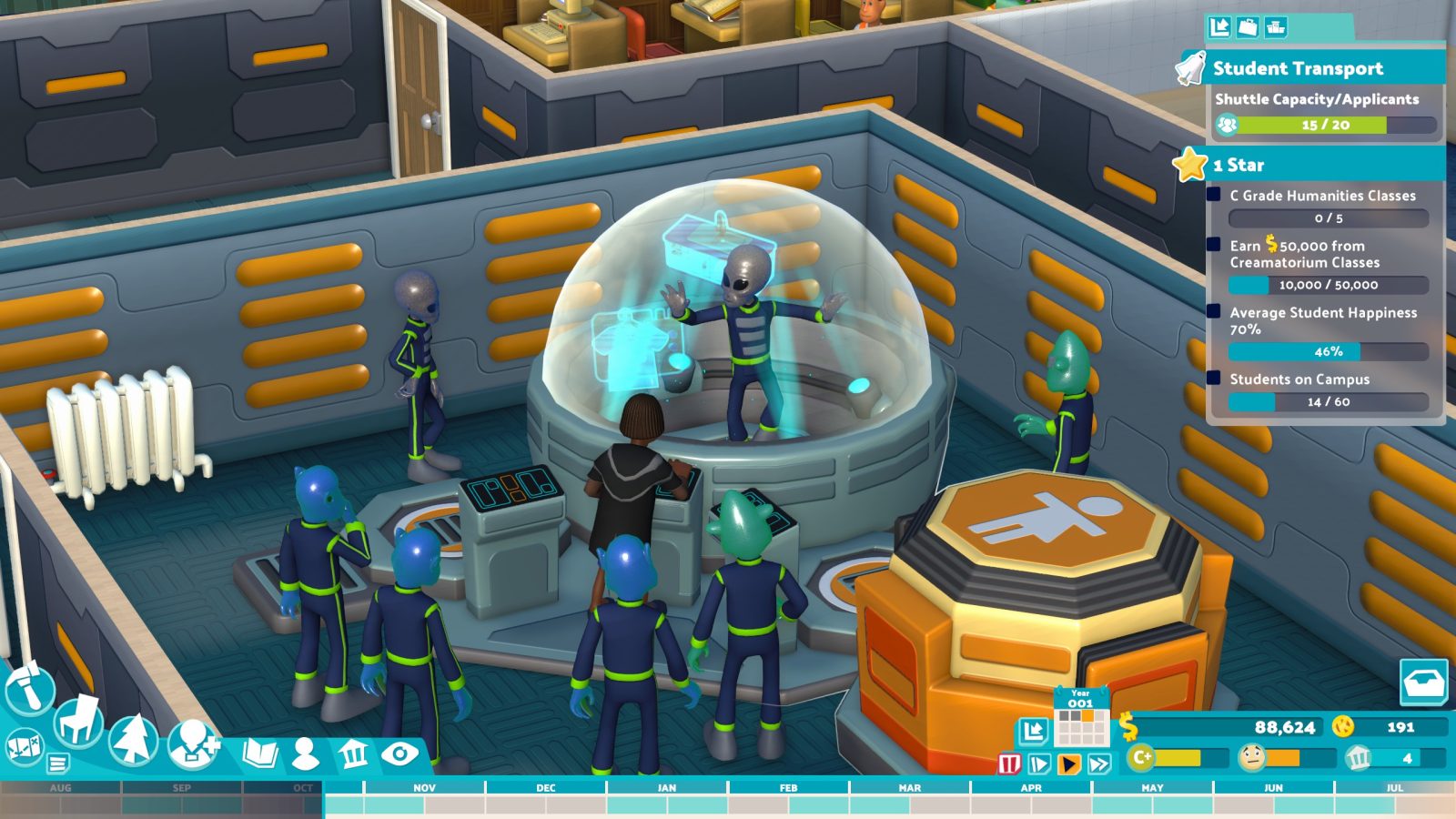 Two Point Campus has received its first DLC in the form of the Space Academy expansion. In it, you’ll take three “universities” out into the universe through space exploration, an extraterrestrial base, and sci-fi conventions. Without further ado, let’s set our academic sights on the final frontier.

As someone playing the game for the first time for this review (I had played Two Point Hospital previously), you do need to go through a decent amount of the main campaign to unlock the DLC areas. It took me about 3 hours to get one star on the three introductory stages, so keep that in mind if you exclusively want to jump in for this expansion. These will show you the basics and unlock a few things, but not everything as we’ll get into later.

The first DLC level is Universe City, where you essentially run a space academy as a front for funding actual space exploration missions for profit. This essentially means you’ll be running the university at a deficit the entire time and recoup your costs with commercial research tasks. It’s a very interesting and fun dynamic, though you definitely need to know you can take out loans to get you out of a few tight spots. Here, you’ll become acquainted with two of the new courses your campus can offer, Astrology and Cosmic Expansion, as well as your helper for the DLC, Captain Cushion (a Captain Kirk ripoff). You’ll have students practicing in anti-gravity chambers (literally just a big fishbowl) and building rockets to send into the stratosphere.

You may find the space you have to work with initially here to be very cramped, but to unlock most plots for purchase you need to fulfill certain requirements such as training staff members, having a certain number of students, or generating research points. Of course there are a few plots you can just buy, but you’ll need to run a tight ship to build the biggest, most profitable facility you can. 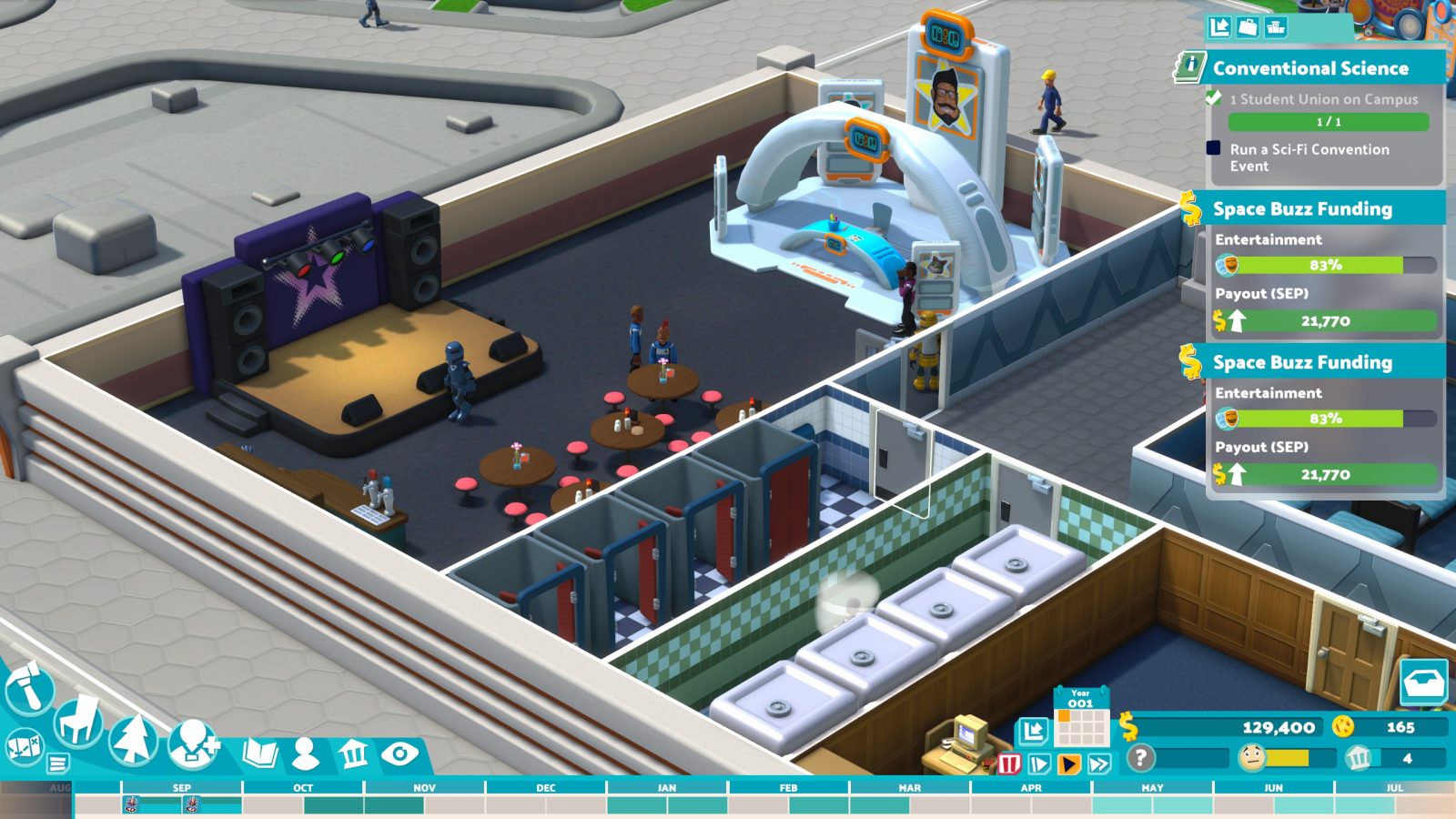 To aid you in financing this venture, meteors containing valuable resources will regularly fall from the sky. You’ll need to have janitors trained in meteor mining to grab the goodies within though, so you may find that the student to staff ratio is a bit in the staff’s favor. Revitalizing a space program doesn’t come cheap, but it provides some stressful fun and hilarious animations.

Next up is Cape Shrapnull, where you’ll “prepare for contact with aliens” by training students in the Space Knight arts of combat and fostering the Next Generation of captains who will boldly go. This stage focuses on forcing Param- I mean a nebulous media company to green light a reboot of Captain Cushion’s science fiction show. You do this by holding events like Space Battles and sci-fi conventions in the Student Union room. It’s cool to see a new use for an existing room type, but of course you’re introduced to two new ones here in the form of Comand Rooms, where students take a seat in the captain’s chair for simulated space flight, and Battle Spaces, for pupils to study the not-bat’leth. 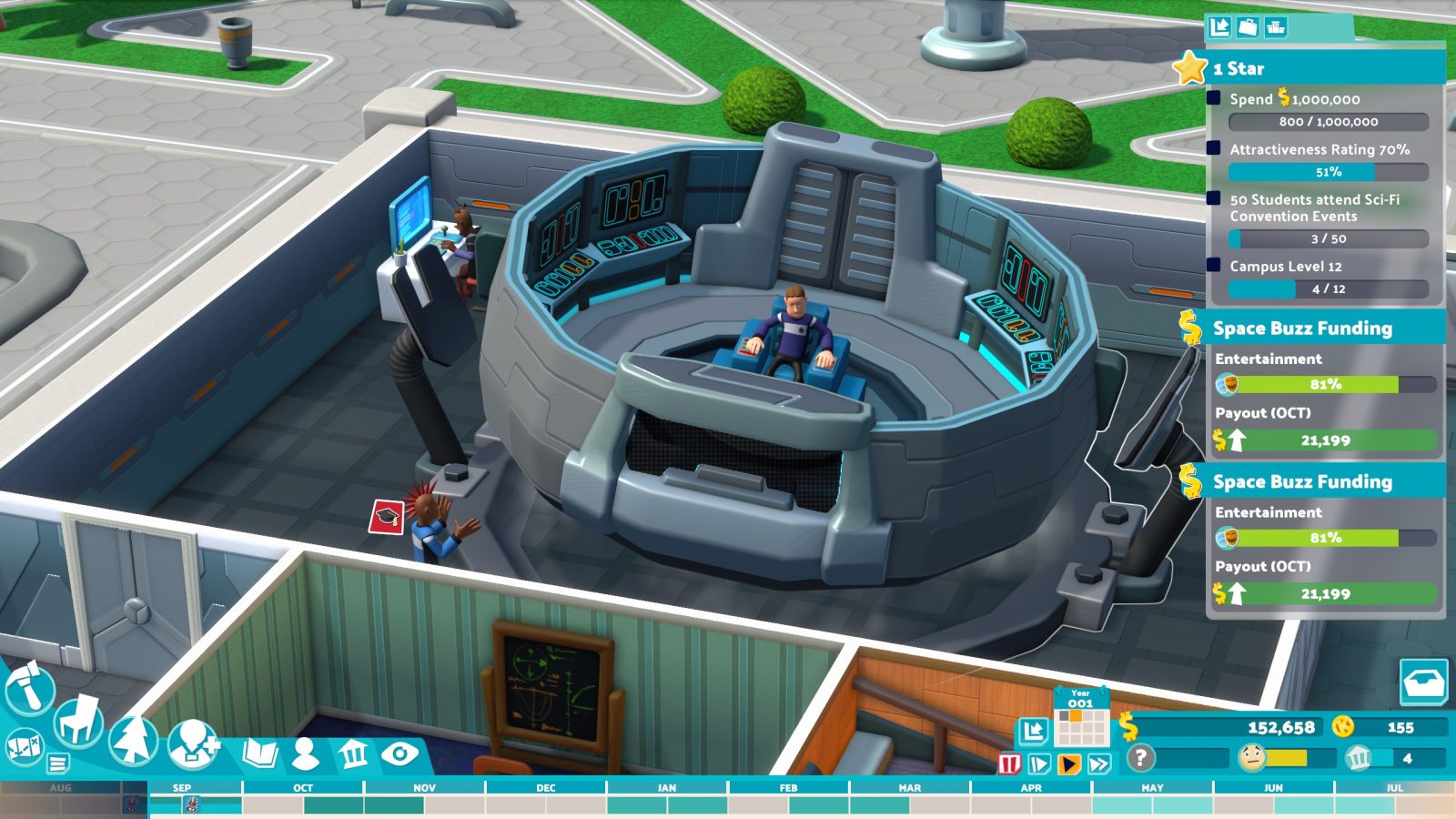 Unlike Universe City, the cash is constantly flowing in Cape Shrapnull – so much so that one of the star objectives is spending increasingly ludicrous amounts of money. To keep things a bit challenging, you do still need to complete objectives to unlock new plots, but I found this to be the easiest and most freeform map of the trio. It’s a good compliment that keeps managing campuses feel fresh and stops you from burning out on the stress inherent in management sims.

Finally, we have Cheesy Heap: Delta-Rye, a massive space rock made of cheese. Here, you’ll take Two Point County’s education where it’s never been before… outside of the county… oh and space. The two new courses here are Cheese-Moongery where students learn Creamation (these puns are SO GOOD) and Humanities for, shall we say foreign, students to learn Earth’s ways. This is by far the hardest stage of the DLC for a number of unique reasons. First, your capacity of total students is limited by how many space shuttles you own. Each one costs a hefty sum and can carry about 10 students to your campus. This doesn’t sound too bad on its own, but becomes a very difficult balancing act when combined with the next rub: student wellbeing. 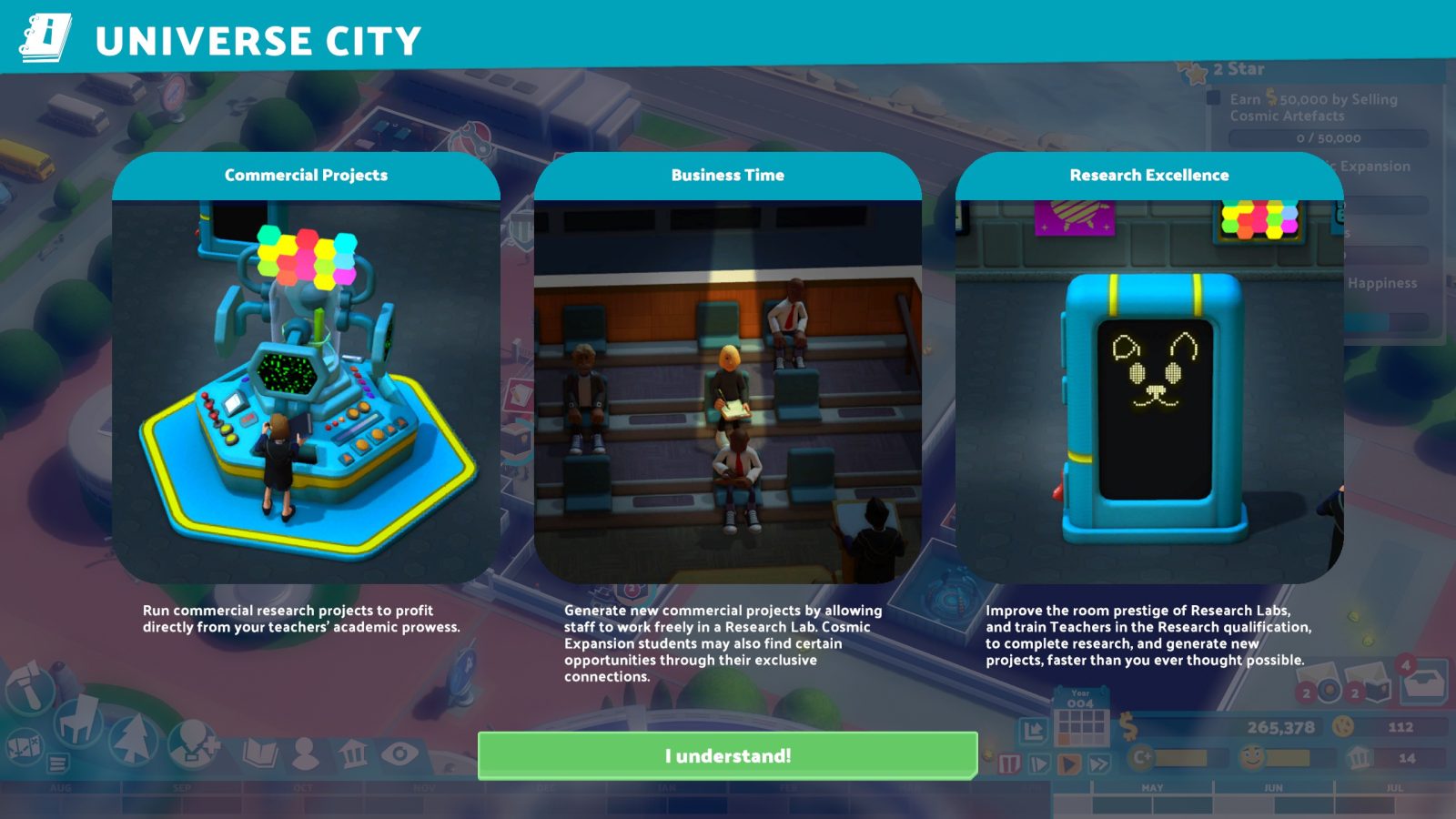 Having taken their studies off-world, students will begin to crave the creature comforts of planet life such as decor, plants, and of course heat – it’s hard to study in only 2.7 Kelvin after all. Unlike the previous two maps, meteorites will bring sicknesses along with fat cash so you need to spend quite a lot of money on Pastoral Support and Medical Offices. If students aren’t happy or passing their classes, they won’t pay their tuition which means less money to get new students and build facilities. While I have gotten the first star at least on all three maps, I still can’t quite get this one to anything resembling stability. It’s a very difficult and interesting challenge that will offer something unique to even the best players.

The content on offer here is pretty great and seems to offer new and interesting features along with some chuckle worthy scenarios, pun, and animations. The biggest problem I have is the unfortunate things surrounding the DLC. I can work with having to complete a certain amount of the campaign to start the new maps, but not everything will unlock from doing so. For the longest time, for example, I could build Pastoral Support rooms, but not hire assistants with the necessary skill nor train anyone in it. To unlock that, I had to go start another map and play for a few minutes until the tutorial for the room type prompted. It’s pretty frustrating as a newcomer to the game to be asked to build things I literally haven’t even seen and residing on another map, so a way to unlock everything for these stages specifically would have been nice. 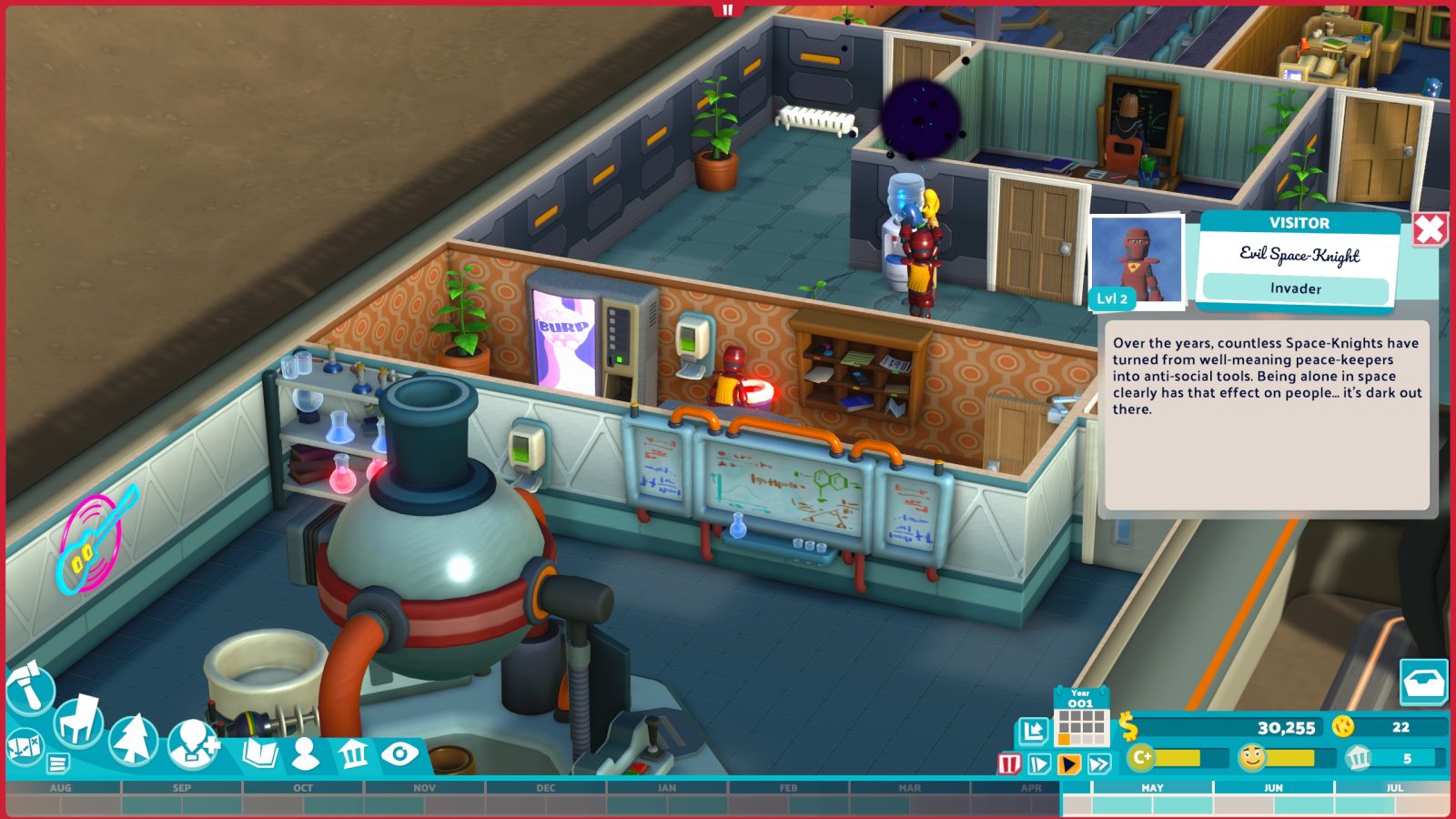 The game looks and runs pretty well (especially on Steam Deck), but I did encounter a few odd glitches. More than once after building a room, in particular lecture halls, they would suddenly say the placement of the door was invalid even though it had already been attached and built just fine. The solution for this is to just delete the room and build it again, but it makes me worry what could happen to campuses with a lot of playtime invested after a while. Still, if you’re already playing Two Point Campus, Space Academy offers more silly fun.

Two Point Campus: Space Academy is more of what you love the game with a sci-fi twist. The three new maps and six courses each present something new and unique with something to enjoy for players of all skill levels. While it’s not ideal for newcomers, this excellent management sim just keeps getting better.

David is the kind of person to wear his heart on his sleeve. He can find positives in anything, like this is a person who loved Star Fox Zero to death. You’ll see him playing all kinds of games: AAAs, Indies, game jam games, games of all genres, and writing about them! Here. On this website. When not writing or playing games, you can find David making music, games, or enjoying a good book. David’s favorite games include NieR: Automata, Mother 3, and Gravity Rush.
Related Articles: Indies, Two Point Campus: Space Academy
Share
Tweet
Share
Submit