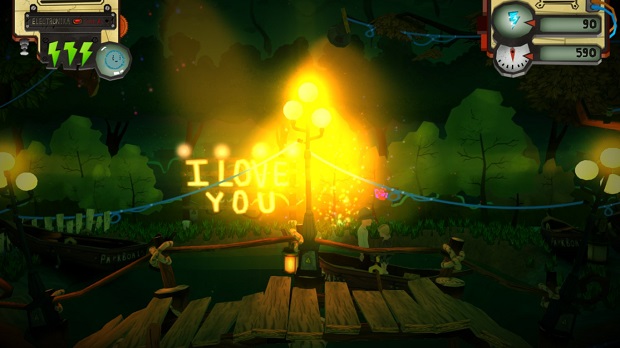 The power has gone out all across Electro City. It’s up to you, a tiny spark of electricity, to bring light back to the homes and businesses of the town. Will you be able to save the day?

In TurnOn, you play as an electrified alien who crash lands on Earth and lends a hand to a city plunged into darkness. It’s considered a platformer, but as a little spark you’re tasked with jumping from wire to wire, switching on lamps and powering generators. Some levels are based on exploration and discovering everything that needs to be turned on, while others require speed and skill to complete. This mixture keeps the game from feeling like too much of the same thing.

You rack up points by delivering electricity to as many things as you can. There are blue lightning bolts you can collect throughout each level, but finding them all just gives you bragging rights. Later on, red lightning bolts appear which steal from your health if you hit them, and only green ones will replenish it.

Because of the uplifting nature of this game and the adorable character you play, I would say that TurnOn is quite kid-friendly, though some of the levels do ramp up in difficulty as you progress further. There were several intense horizontal and vertical chases to contend with, like avoiding a helicopter and trying to catch a runaway tram, but conquering them feels so rewarding. All the effort in itself is satisfying, but there are achievements to earn as well, both for completing areas and for performing exceptionally in levels. This definitely adds some replayability.

TurnOn has a very loose narrative, with throwaway details like stopping a drone that has a video camera, but there’s no dialogue — spoken or written — and the cutscenes that introduce each level are strictly pictures. However, it’s easy to see that the emphasis in this game is on helping people, which I love. You illuminate streetlights to ensure that a young girl gets home safely, provide power to a cafe for a date, and rescue people who are trapped on a ferris wheel. It’s a lot of lighthearted fun.

While the challenge levels brought more variety, I will say I didn’t like them quite as much as the free wandering levels. Part of that dislike stemmed from the controls feeling less responsive. The closer you get to the end of a live wire, the more likely it is that jumping won’t work. In the levels where you explore a section of the city, there are a few checkpoints scattered around, and falling from a wire doesn’t restart the level entirely, it just respawns you at a generator. Most of the time, the chase levels force you to start at the very beginning if you slip up, which brings more than a little frustration.

However, as a whole TurnOn is absolutely charming. The soundtrack is overflowing with beautiful, relaxing music, and you’ll feel like the town hero fixing stoplights and activating alarms to scare vandals away. Playing this super cute game will brighten your day in an instant.

TurnOn is an enjoyable and heartwarming little game. With electrical wires instead of platforms, it offers gameplay that feels fresh, piquing your interest at every turn with whatever new adventure or obstacle you’ll face next.

Sarah Marchant is an office admin for a nerdy t-shirt company. She has a soft spot for indie games, a passion for story-driven titles, and a weakness for cooking games and anything with zombies.
Related Articles: TurnOn
Share
Tweet
Share
Submit