Not everything needs to be flashy, colorful, and in your face in order to be appealing. Sometimes a more simplistic approach can be more striking, especially if the art style and tone catch your eye. That’s what My Beautiful Paper Smile does, although I’ve only had the chance to play the first two chapters. That being said, the developer has stated that the final two chapters will be released at a later date. This black and white art style mixed with unsettling tones, dark storytelling, and simplistic gameplay hooked me right away. 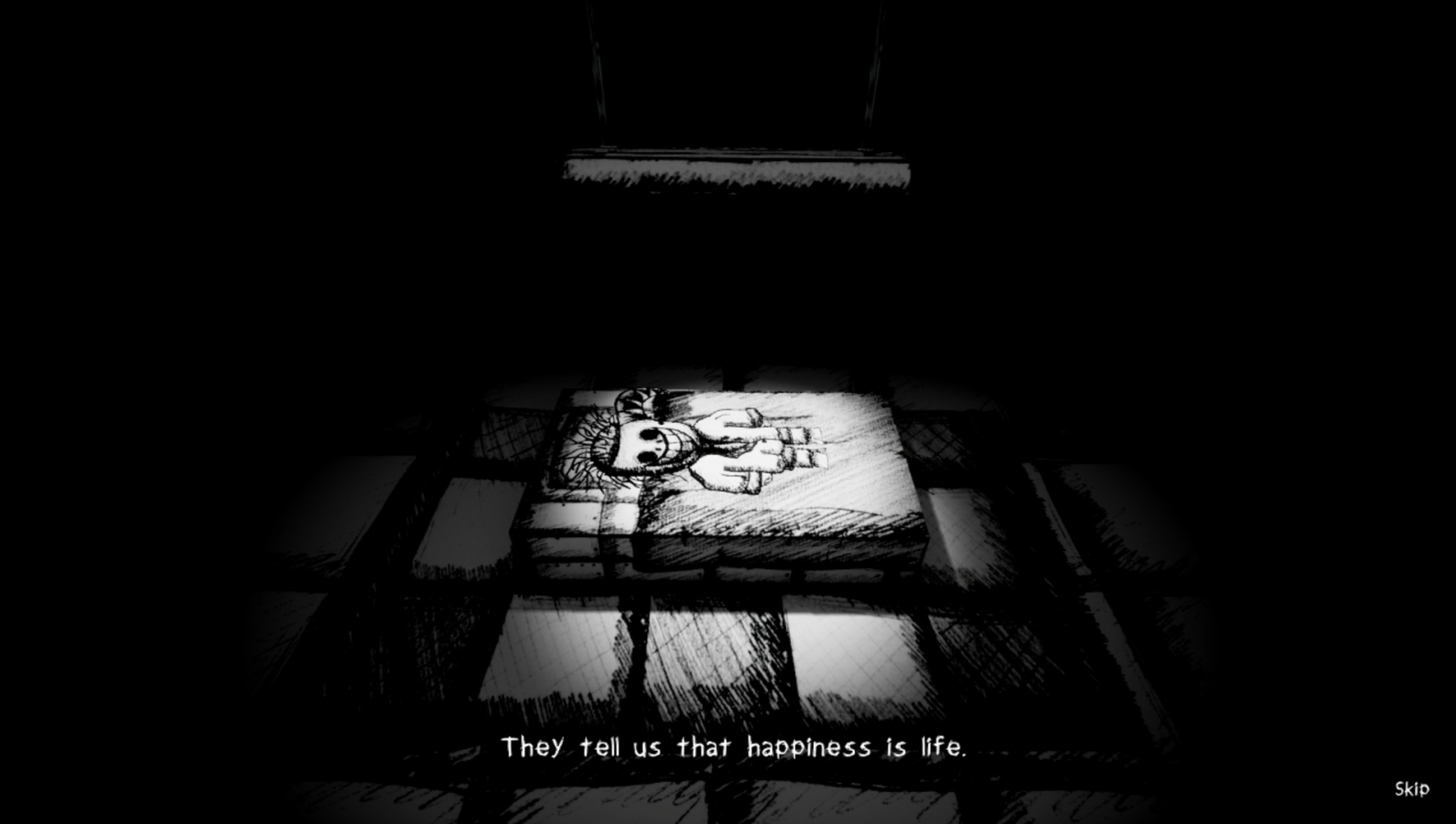 In this messed up land, children called The Joyous are kept in large prison-like facilities and are watched over by The Authorities, which are essentially prison guards. Each Joyous is forced to wear a paper mask with a permanent smile that they are warned to never remove. The character you play as even has a line stating that he hears voices when he tries to remove his mask, so there may be more to the masks than we initially believed. The Joyous are directed to always stay with their roommate because loneliness is dangerous, so you’ll always see groups of two children or more. I know they always say swim with a buddy, but this takes it to new extremes.

The only time that the Joyous are able to be alone is during their daily testing sessions. For some reason, the king of this land has decided that happiness is the only emotion that the Joyous are allowed to feel, with any other emotion being deemed as weakness. As part of this decree, the Joyous are put through testing sessions every day in order to test their resolve and determine who is strong and who is weak. Any Joyous who fails during the test or even ends the test feeling any semblance of sadness, anger, etc. gets taken away to some sort of punishment session. My Beautiful Paper Smile makes it clear right away that you’re in for a dark story with plenty of details that will unnerve you. What kind of person would do this to children? Why would they do this to them? Those are questions that we’ll hopefully learn the answers to by the end of all four chapters. 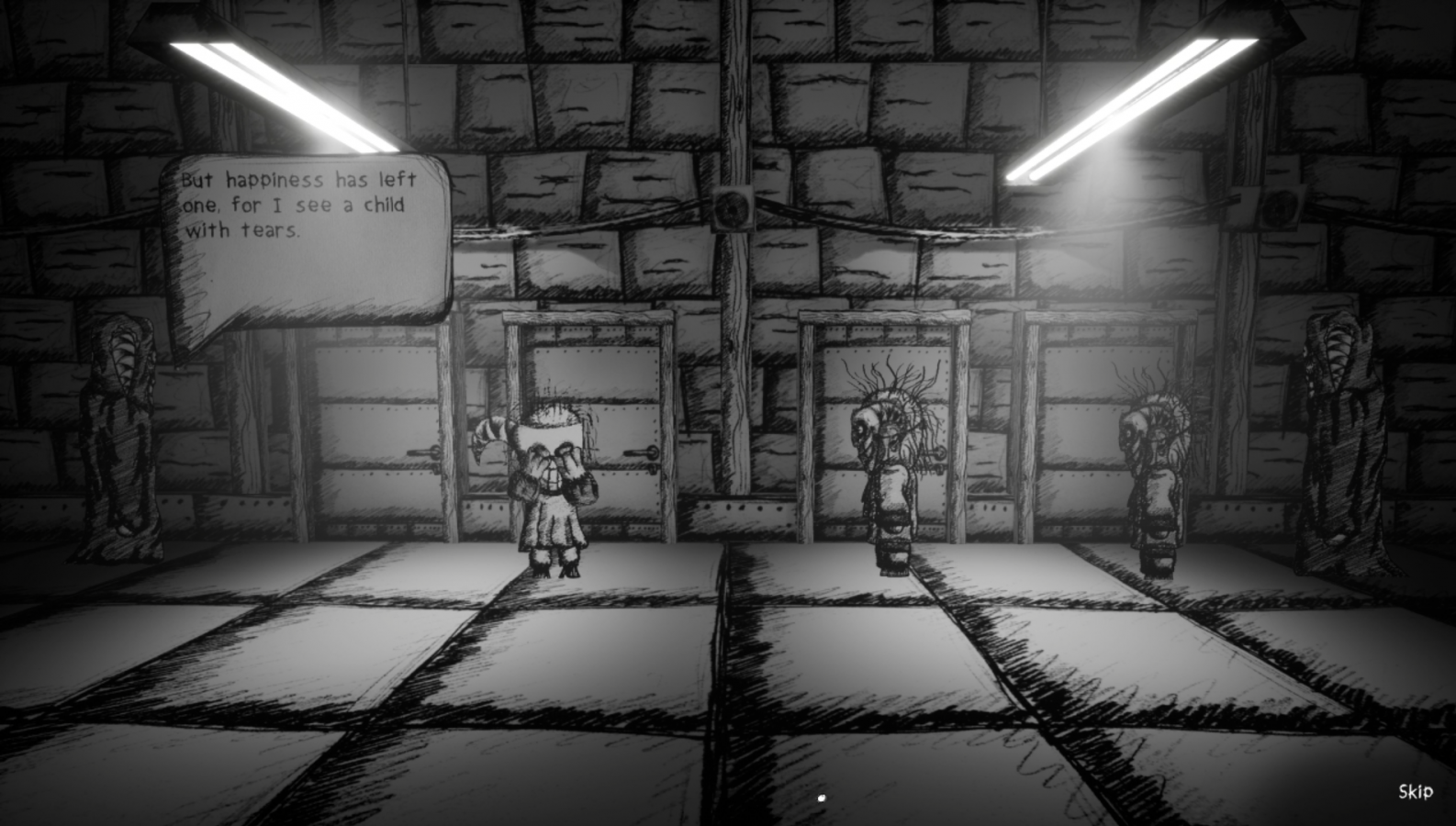 You play as one of the Joyous who hears the voice of The Lost Child, a mysterious entity that we don’t know much about. This voice helps inspire you to find a way to escape, and without spoiling anything, you’ll get your chance soon. The gameplay revolves around you walking around with the WASD keys and interacting with objects by using the mouse. It’s a nice combination of casual exploration games and point-and-click games. As you venture through the various areas of the game, you’ll be sneaking past enemies, solving environmental puzzles, finding collectibles, and taking in the scenery. Overall, the gameplay isn’t difficult, but there are some sections that can be a bit annoying. For example, there’s an area where you are tasked with luring a creature to a spot with masks and then placing masks on it in order to scare it away. By trial and error, you’ll end up learning how to pull this off and that you have to successfully do it three times to get rid of the creature for good. You have to be stealthy the entire time as well, and sometimes that doesn’t work out how you’d like. I was killed at least a half dozen times during this “fight” of sorts. Sometimes it felt like the creature would discover you and rush at you when you were far away from it and were being careful. It didn’t ruin the game, but it was a bit annoying.

I mentioned collectibles, but I’ll keep it brief. During both chapters, there are hidden collectibles scattered throughout the areas you’ll be exploring. Chapter 1 has three types of tickets, while chapter 2 has three types of stones. If you find a complete set, then near the end of that chapter you’ll find a station where you can turn those collectibles in. Chapter 1 grants you access to some creepy shows, while chapter 2 gives you some interesting results with some fountains. Be forewarned, some of these collectibles are hidden really well, so keep your eyes peeled if you want to see something a little extra. 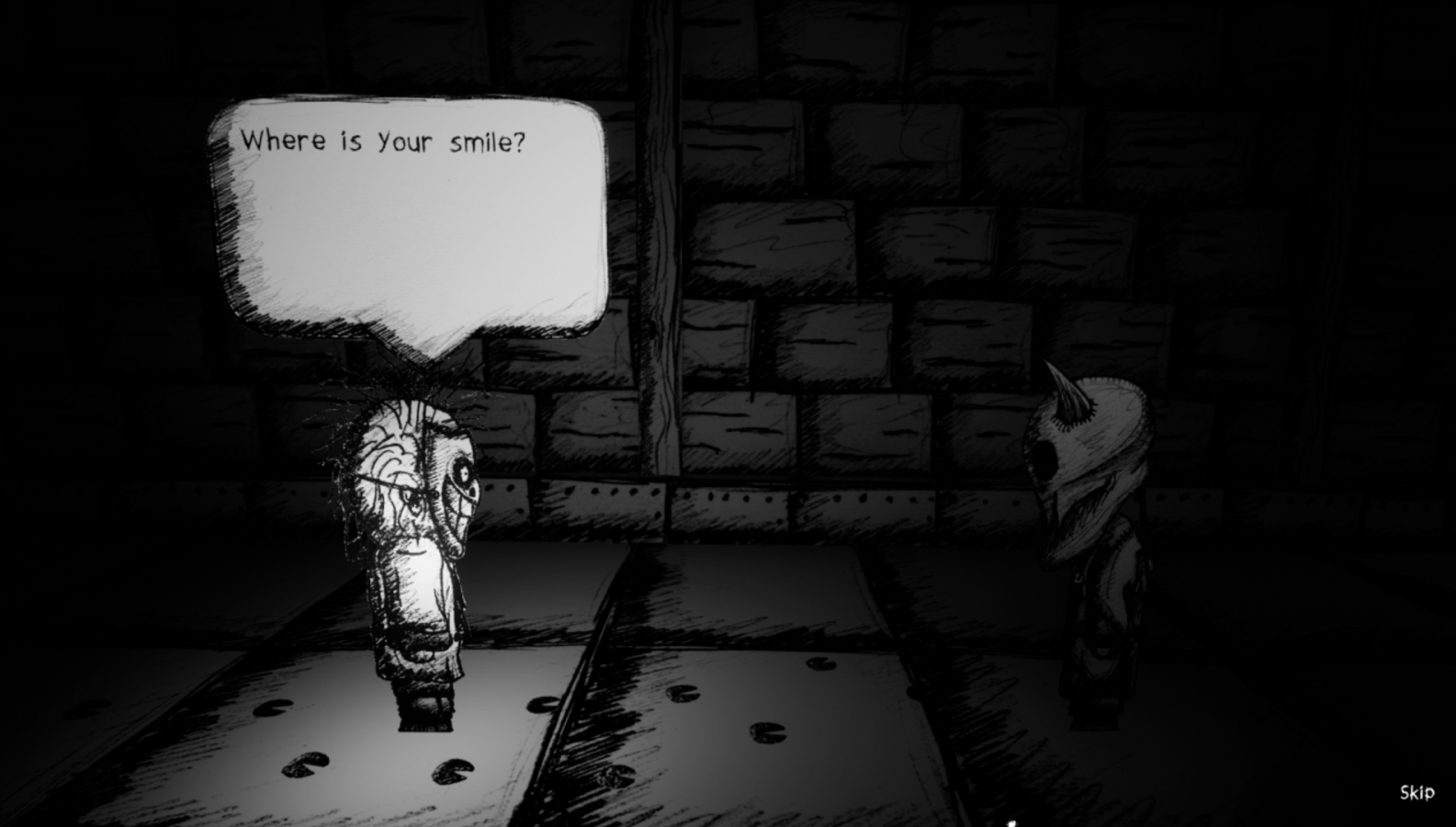 Early on I stated that art style and tone can be enough to pull you in, and honestly those are the reasons I wanted to play this. Instead of being colorful, hyper-stylized, or even realistic, My Beautiful Paper Smile aims for a black and white, hand-drawn look. That’s not a bad thing either; in fact, it feels like a talented artist sketched out this world and added in all of the necessary shading in order to make the world feel creepy and polished. This design choice along with the clearly twisted story immerse you that much more. The mostly quiet world has minimal sounds, which is unsettling as well, especially since many games have some sort of ambient noise or music playing in the background. Again, great choice for this kind of game. With all that being said, My Beautiful Paper Smile Chapters 1 and 2 aren’t very long, but they are the start of a disturbing story set in an interestingly twisted world. I can’t wait until chapters 3 and 4 get released so that I can continue the journey of this brave little Joyous. Until then, I’ll keep my paper mask on and not let anyone take my smile.

My Beautiful Paper Smile Chapters 1 and 2 drop you into a world where children are forced to be happy, and punished for feeling anything else. It may unnerve some people, so keep that in mind. The gameplay is simple, but some sections can be annoying and feel unfair. You're left on a cliffhanger, but the final chapters will be released later on.

Codi loves to play video games and watch movies. He will watch almost any kind of movie just to experience them. His ideas take inspiration from the shows and movies he watches, and games he plays. He also loves a good pun.
Related Articles: My Beautiful Paper Smile
Share
Tweet
Share
Submit