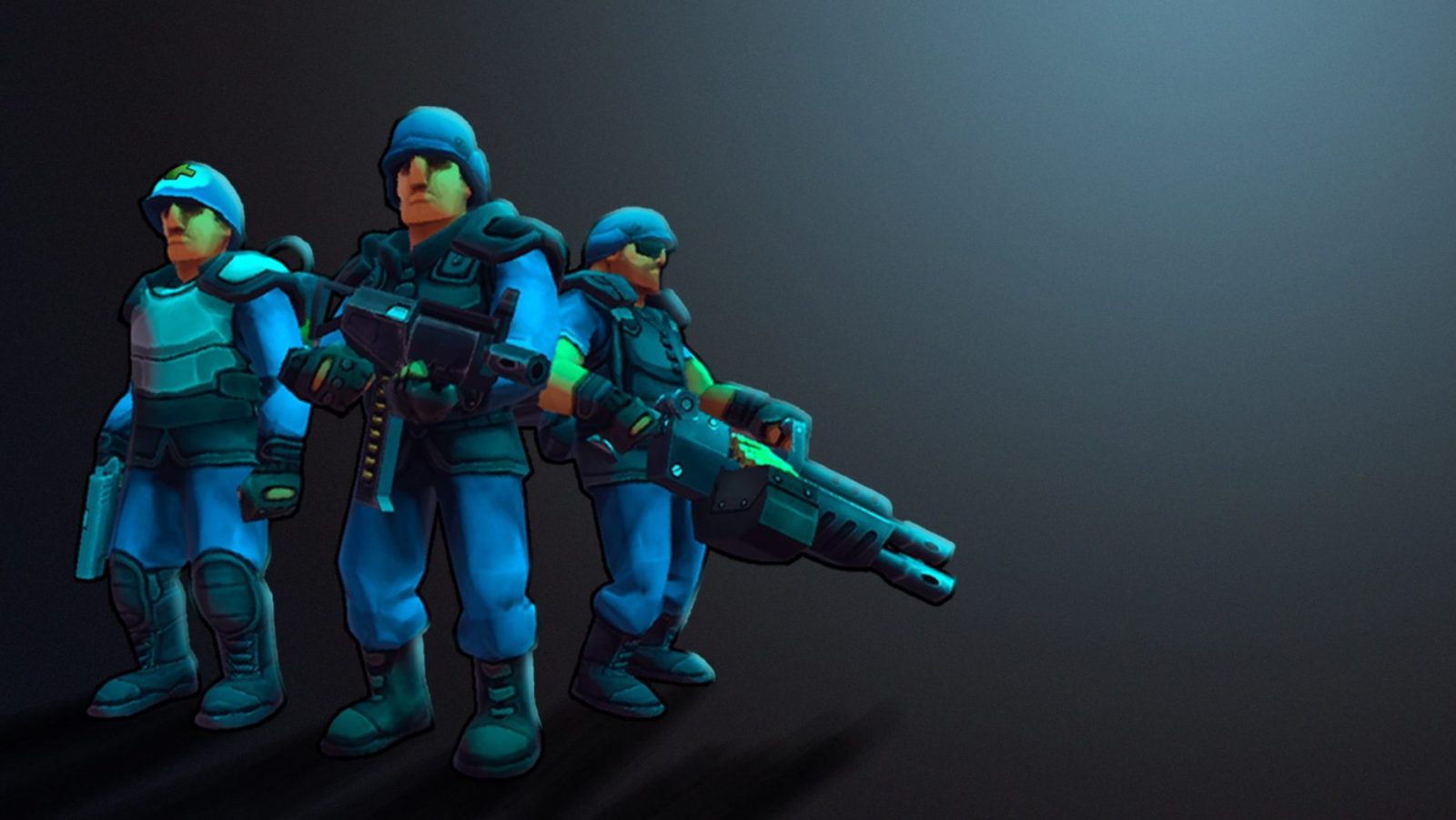 I have a distinct fondness for multiplayer games that emphasize couch co-op, as nothing is better than ganging up on some baddies with your friends, especially when four can play at once. Delta Squad is a top down shooter where you and three of your mates can take down zombie-like monsters and an oppressive dictator and his militia. Unfortunately, it doesn’t bring anything new to the table as far as gameplay, mechanics, or style. The level design is bland and doesn’t evoke the world in which the designers were attempting to create, and the uninspiring and basic gunplay is mediocre at best, which left me feeling as if this should have been a simple mobile shooter for on the go entertainment.

Feeling as if it was inspired by 90’s top down shooters, Delta Squad tries to capture their simplistic yet fun couch co-op gameplay but fails miserably. With the left thumbstick used to move around and the right used to aim, it’s easy to run n’ gun as you mow through monsters and enemy forces. As you drop into a world overrun by zombie-like monsters and the militaristic fascist group (always played by a foreign dictator or government), you learn that Dr. Malcolm, a scientist who created a deadly virus that turns humans into monsters, has let it fall into the hands of the Rumanovsky forces. Simple enough plot, right? The tone of the game is never set, and I guess that’s part of being a simplistic 90’s style shooter. Upon arriving at the main menu screen, unlike most games, Delta Squad does a poor job in trying to make me believe that this is more than a cookie cutter game made with prefab assets from a popular game engine store. Instead of creating a home screen that’s appealing, Eskema Games chose to use a flat plain in the middle of a blue void of space to display a small military base of Delta Squad. It was like watching someone play with army men in a cheap cardboard set they purchased from a garage sale. 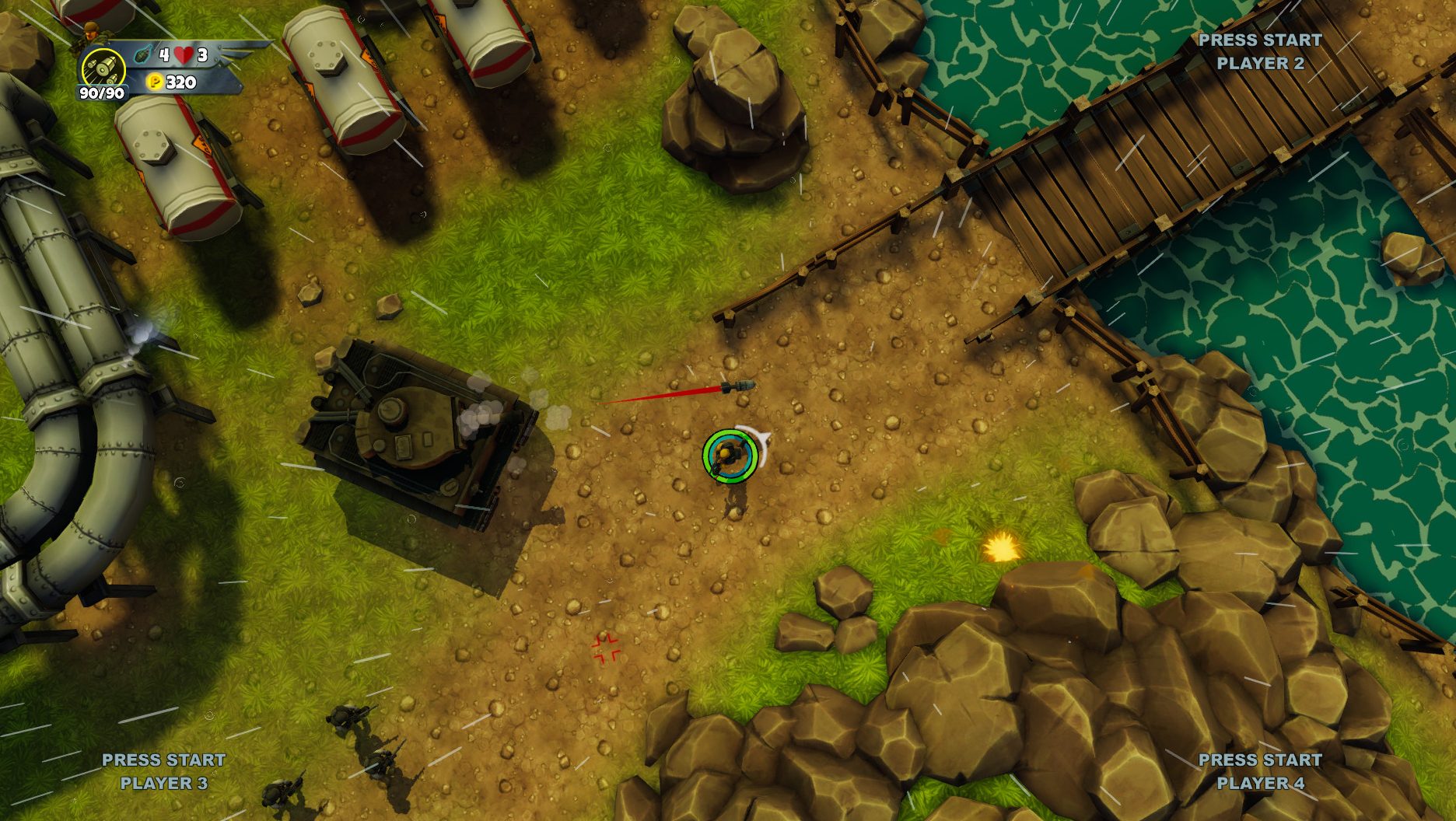 Choosing the campaign, you begin by selecting one of the four different soldiers: Heavy, Infantry, Medic, and Engineer. I chose the Heavy, a soldier with higher defense but moves slower than the rest of his comrades, and honestly, after playing with the other three soldiers, I couldn’t see how they could make the Heavy any slower. As the game loads, you are briefed on the situation, and it’s up to you to secure the area that’s been overrun by zombie-like monsters and the Rumanovsky forces. Your soldier rolls into the battlefield in an armored tank that looks to be the tool for the job, especially when you come across the enemy tanks, but we can’t all get what we want. Immediately, I noticed that the level design didn’t fit the world the story was depicting. The level design was bright and unrealistic for a world that is inhabited by monsters and threatening military forces in the streets. Much of the world is uninspiring and lacking any depth or interaction. The streets were perfectly paved, and the neighborhoods looked as if they were designed with images from a Better Homes and Gardens magazine. Nothing about the environment screamed, “…save the world.”

As I made my way down the streets, I encountered my first of many encounters with the zombie-like monsters. Looking as if they were normal people that simply got up on the wrong side of the bed, I found them to be no threat at all because they moved slower than my soldier did. Like a zombie, they moved at a snail’s pace in my direction, but could never catch up. Thinking I could corral the mindless monsters into an area that appeared to have destructible gas containers, I tried and failed. Shooting the tanks offered me no solace as they weren’t destructible. Though later in the game you’ll come across gas tanks that are destructible, these aren’t. Everything felt like a mixed bag of, “…take whatever we give you.” At times, larger groups of monsters attempt to overwhelm you, but with the default magazine for a Heavy being three-hundred rounds, it’s easy to disembowel anything and everything you point the right thumbstick at. I’m personally not sure why they opted to make the zombie-like monsters so slow, but they simply don’t do anything but take up space on the screen. You always feel overpowered because nothing in the levels (there are a total of 50) feels challenging. In fact, I purposefully ran into three of the monsters and took no damage. They just dredge along, blocking your path and occasionally drawing the fire of the Rumanovsky forces. 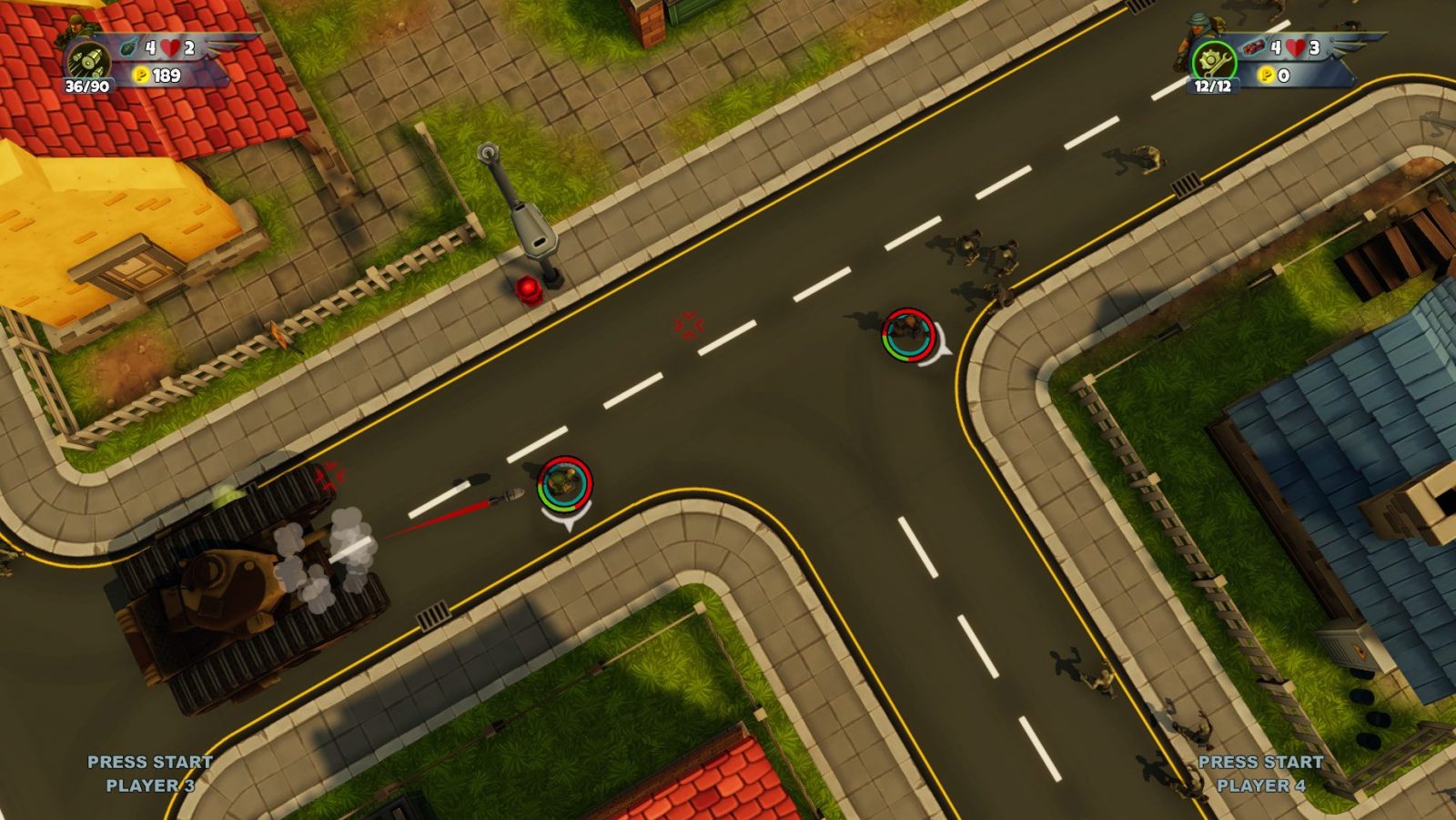 The enemy forces weren’t much more of a challenge. When I first saw a Rumanovsky soldier, I thought he was support because he didn’t immediately fire. I didn’t realize he was the enemy until I ran past him and he then decided to shoot me in the back – and this type of inconsistency cripples the game from beginning to end. Often, they will run out of a house in the neighborhood that’s not even theirs and won’t shoot until they’re on top of you. If they invaded the city, it would have made more sense for them to disembark one of their tanks or carriers, not the Partridge family style homes that were on the corner of every street. The game never feels like an experience that should be on a console, but at home on your tablet or phone. The levels appear to be copy and pasted, especially as you progress, and the enemies offer no challenge. The boss battles are typically large tanks and large armored guns, which is typical of top down shooters, but even they left me wanting to place the controller down and walk away.

Delta Squad is a four-player local co-op game that completely misses the mark. Even with its basic controls and simplistic gameplay, nothing about the game warrants a first playthrough. With enemies that seem confused as to what to do, an imbalance in ammo, and the cookie cutter level design, it’s hard to see how this game can get four people in the room together at the same time to play. With a price tag of $5.99, it's a hard buy when there are many free mobile games that offer more enjoyment.

T.K. is a freelance writer, narrative designer, and author. Writing and developing narratives and giving voices to digital world and characters is his passion. As a game writer, QA game analyst, and editor for Gaming Trend, he enjoys being a part of the gaming industry.
Related Articles: Delta Squad, Indies
Share
Tweet
Share
Submit