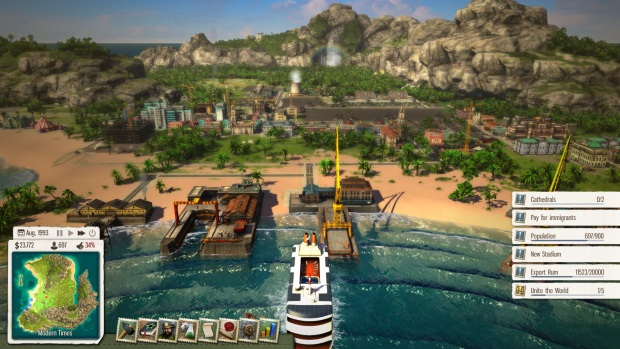 There must come a time in the life of every dictator where they’ve just had enough. If the Communist Party leader asks for more free clinics again, or the Tropican people try to oust me in elections for the umpteenth time in a row because they’re tired of living in run-down shacks, or that idiot Leon Kane and his associates keep trying to nuke the planet back to the Stone Age… I swear I’m just going to stuff my right-hand man Penultimo in a duffel bag, empty my Swiss bank account, and grab the soonest flight out of this hellhole I have created. At least, that’s what I’d like to do, but Tropico 5 demands that I stick around and at least make an effort to clean this mess up.

The newest entry in the dictatorial sim series from Kalypso Media and Haemimont Games, Tropico 5 is a game that desperately wants to unite the decidedly old-school city management genre with current trends in game design, an aspiration to which it marginally succeeds. Tropico has never been so accessible—much of the previous game’s tedious micromanagement and overwhelmingly complex user interface has been massaged to a point where newcomers to the genre should feel much more comfortable getting their feet wet. New technologies have to be researched, making the early game much more of a slow burn than the often chaotic first few hours of other management sims. In addition, Tropico 5 now features rudimentary RPG elements in the form of a customizable and upgradable player dynasty, and the graphics have been substantially improved over Tropico 4, yet at the same time appearing to run more smoothly than its predecessor.

Central to the Tropico 5 experience is a fifteen mission campaign that starts in the colonial era and follows the story of the Tropican people and its benevolent dictator through both World Wars and the Cold War, into the modern era, and back again to the beginning in a second loop through following the discovery of time travel. This effectively makes the campaign feel like two mini-campaigns, one in which you amass resources to help your insane benefactor Leon Kane of the misanthropic organization The Order destroy the world, and one in which you and the altruistic Abraham Zweistein attempt to stop the other you and Kane from succeeding. It’s a quirky and charming enough plot, even if the time-travel-to-avert-nuclear-war conceit is a little stale, and even if it feels a little out of place in a series traditionally devoted to morally suspect exploitation of impoverished Caribbean islanders.

Unfortunately, the 20-25 hour campaign of Tropico5 feels utterly disjointed. Missions hop from island to island, objective to objective, and there’s never any time to actually get ahead. Plot goals are always arbitrary, and not typically very interesting—saving the world from nuclear disaster might sound great on paper, but in a game where the plot is delivered exclusively in short occasional voice overs accompanied by monologic text or a flyover of the island, there’s not exactly a tremendous narrative weight to the proceedings. There also isn’t a real sense of building a dynasty or an empire, either— the only function of dynasty members is to give passive benefits to your economy, and managing at least four islands across the missions means that there is seldom a chance to really focus one one location and develop it thoroughly. There is, of course, a sandbox mode, but where win conditions feel arbitrary and meaningless in campaign mode, they are basically pointless in sandbox. Either you’re the kind of person to want to mess around with an island construction set or not.

In general, the goals and achievements in Tropico 5 feel rather empty. Citizens are never happy, and screwing them over just never feels fun or rewarding enough. One of the core objectives is to build your Swiss bank account, which is done essentially by embezzling money, but there are no particular consequences for this, or any particular rewards. The only thing Swiss bank account funds are good for are for leveling your dynasty members in the extremely unremarkable RPG-lite character builder. Political affiliations are reset in every era, and quests that seem like they could have interesting repercussions are always just feedback loops of more assets to keep the machine going. At one point in the Modern Era, it becomes possible to join the European Union (somehow this is intended to make sense for a Caribbean nation) and adopt the Euro, after which nothing happens. Currency is still reported in dollar signs, and you gain a few points to your standing with the EU—practically a zero change.

It is difficult to pin down exactly who Tropico 5 is targeted at. Long-time fans of the series will likely find its concessions to accessibility and its grandiose time-looping plot to be betrayals of the micromanagement-heavy despotism of the previous games in the series. Newcomers to Tropico may find the requisite anal-retentive attention to detail still overwhelming, and the overall arc of the mission structure to be too piecemeal to play casually. The Tropico series specifically, and management games in general are in need of a serious rethink and reboot. It’s becoming very difficult to justify their existence in the face of free or nearly-free mobile games such as Tiny Tower that tickle that part of the gamer brain that begs for micromanaging an endless loop of increasing goals without a steep learning curve, a 20 hour commitment, or a $40 initial buy-in. Hardcore simulation games on PC and console have an opportunity to do something different, to branch out and diversify play in ways that mobile can’t do, which would create something that would look quite different than existing series mainstays but would be much more compelling. It’s going to take more than some tacked-on RPG elements to do that, however.

City-management aficionados and existing Tropico fans should have no fear—this is still Tropico, irreverent sense of humor and ability to blatantly disrespect the valid concerns of your citizens intact. That said, there aren’t any new ideas in this edition or any particularly strong arguments to justify its existence over, say, Tropico 4. Game franchises need a release at least every few years in order to stay relevant, but it would certainly be nice to see more fresh ideas in the process. Tropico 5 exists because it needs to, and if you need a Tropico 5 as well, then it’s probably worth your time. If not, it’s probably best to give it a pass.

Reviewer’s note: Tropico 5 is the first game in the series to ship with a multiplayer mode—unfortunately we were unable to arrange a way to test this feature in time for the review. I will play through some multiplayer once the game is publicly available and update this review to reflect that experience, although based on my understanding of how the multiplayer functions, I don’t anticipate much change to the conclusions or score of this review. Updates to follow.

Update 5/29: After several unsuccessful attempts, I was finally able to get Tropico 5‘s multiplayer up and running. It is exactly what you’d expect. The game proceeds just as any other sandbox playthrough, only with the addition of cities run by other players cohabiting the same island. A rudimentary diplomacy interface has been implemented that doesn’t exactly allow for a wealth of interesting possibilites—not that Tropico‘s borderline non-functional combat system would have ever made for interesting PVP matches. In addition, although that the game is officially out and has been patched, the matchmaking system is very nearly completely broken. I couldn’t get a quick match to function at all, and using the lobby chat to create a custom game only worked after many false starts over a period of days. The discussions in the game lobby seemed to imply that others were having these difficulties as well. Bottom line: if the presence of a multiplayer component is a critical factor in your decision to pick up this game, I would advise extreme caution.

Tropico 5 is a stop-gap measure, another coat of paint on a series designed for a specific audience that’s looking for a specific experience. The freshly streamlined interface may court some new blood, but a lackluster campaign and a failure to branch out from the micromanagement-heavy core sim experience makes this a tough sell for outsiders to the genre.