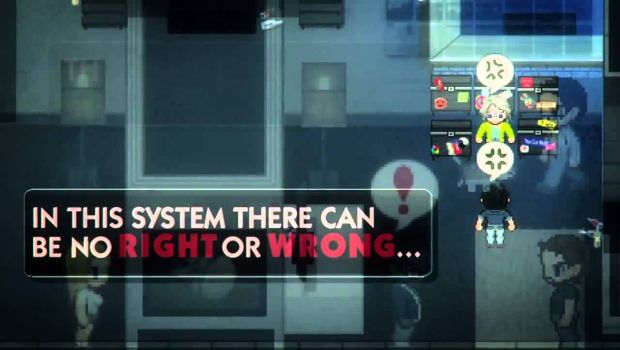 Much like the film industry it often imitates, in the videogame world the definition of an “independent” creation operates on a sliding scale. Outside of the sheer volume of a games production budget, there are also the questions of the development team’s size, their planned distribution, and sometimes even the concept. After all, even Bungie now qualifies as an independent company while piloting multi-million dollar projects.

Whatever your requirements for triple-A autonomy may be though, it’d probably be a safe wager that Vagabond Dog and their project Always Sometimes Monsters qualifies in nearly every way, and in this gamer’s opinion, almost all of them are good.

The premise of Always Sometimes Monsters, on the very surface, is actually very direct. You are playing a down-and-out artist who just finished losing everything after trying to make it big. With no job, no cash, and very little hope, your character receives a letter in the mail detailing that the last thing he or she cares about is slipping their grasp forever. With nothing to lose, you set off on journey to seize whatever happiness may still await you… or very possibly die in the process. The twist that makes this title extra-special however, come from the challenges that await your hero: everyday life…

Now admittedly, there isn’t much a person could think of that would seem like more of a mundane time-sink than a game about trying to make ends meet, performing great sacrifices for little reward, and the in-and-out stresses of paying your bills or doing the right thing. But Always Sometimes Monsters manages to keeps this tale engaging because your hero only has so much time to get any one thing done and achieve their ultimate goal. This creates a lot of pressure both morally and otherwise as you pilot your way past the various difficulties your hero is confronted with and what outcomes await you. Also, while many titles claim to feature it, Always Sometimes Monsters is a narrative adventure truly about choices and how through either action or inaction the course of your characters life will be changed. Choices like how not helping your kind elderly neighbor in order to keep a promise to your friend also means never seeing her again, or how protecting your integrity as a journalist means not making enough money to pay your rent. This isn’t a title simply attempting to mimic life, its mimicking a seedy variant of life that only certain individuals can empathize with but many should be able to imagine, a world where your life’s gone wrong and in the process your vision of “wrong” has become something other than what it used to be. While at times it’s more than a bit dismal, primarily it’s captivating.

As far as presentation goes, from the moment the opening logos have faded and the title screen music has begun, everything about Always Sometimes Monsters feels like an 1980’s throwback. The dialog is delivered through a series of slides beside an image of the speaker in question, your 8-bit characters move along gridded trajectories against largely un-interactive objects, and unless you scribble it down yourself there is no journal function or maps to speak of. This is bare-bones gaming by any modern standard and for the very newest generation, maybe even archaic. But in no small measure does this minimalist approach encapsulate Always Sometimes Monsters’ intriguing appeal. This game was purposefully made to be a simple creation with complex guts; dynamic enough that, if you so choose, the entire journey can fully and functionally be over within the first ten minutes with the real-world press of a button and a virtual pull of a trigger. This dynamic element however, is also where Always Sometimes Monsters can sometimes lose it grasp on your imagination.

The more options any game or story offers a person, especially tales which are supposed to mimic “real life”, more options and choices a person is going to want. Always Sometimes Monsters, in its simple virtuoso of substance over style, at times paints itself into a corner with that very question of; “ I could do this, why can’t I do that?” Also, the interactions with objects and NPC’s can feel a bit haphazard at times, proving cumbersome beyond titles implied dogma of “even the simplest tasks can prove a challenge”. As a matter of fact, if you happen to locate them in-game, there are a pair of avatars modeled after the developers who will tell you as much themselves.

However, all of this only matters as much as player actually likes the story itself. Sure, Always Sometimes Monsters has to roll the dice on whether or not a player will like it’s narrative as much as any other title that bothers to have one. However, in games which are only about the narrative, lacking any actual “gameplay” to speak of, this becomes a much larger concern. If you can’t get beyond playing a lonely vagabond, who at times needs to sleep on the street to stay alive… sell some drugs to win someone’s trust, or even believe in true love, there won’t be much here to hold you. However, if you love a good story and want a really creative way to take part in telling it, there is little reason not to toss this title in your shopping cart and bring it home. At the very least to give its hero a place to sleep tonight.

Always Sometimes Monsters is one of those independent, cult-classic-to-be, games that fans of narrative storytelling should really give a chance. Whatever flaws it may have are obvious and avoidable, and at no point did I encounter something game-breaking that soured my time. There are plenty of paths to choose from, feelings to explore, and surprise consequences that will make you give yourself a high-five or scream at you monitor. The Vagabond Dog boys have made a solid start.