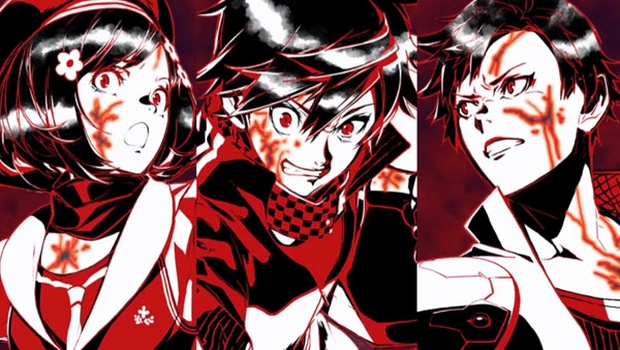 Dungeon crawlers have always been a difficult genre for me to get into. I was never the type to break out a pen and paper to map out my route; it always felt like a relic of past games, and the only reason the mechanic of intentionally obscure dungeons stuck around was for nostalgia’s sake. Ray Gigant doesn’t breach the same complexity of the older dungeon crawlers it draws inspiration from, but at the same time, it makes significant strides in making the genre wholly more accessible and engaging.

The world of Ray Gigant has been ravaged by enormous beings, monsters with god-like power that humanity has labelled as “Gigants.” The only means of battling them is for compatible humans to join with Yorigami, an equally mysterious force that manifests itself in wearable trinkets. Signing a Faustian deal, these compatible humans slowly fuse over time with Yorigami, and you view their struggles through three different protagonists who all have surrendered themselves to powerful Yorigami.

Characters like this sentient AI flesh out the cast in interesting ways.

Conceptually, it’s a compelling world. Although the story is more prone to anime hijinks than deep introspection, there were poignant moments to be found, especially in the latter half of the narrative. Ichiya, the first protagonist, is mostly your introduction to the world and nature of Yorigami, and seeing as most of his story takes place in a pseudo-school for Yorigami users, most of his chapters end up focusing on adolescent drama. Kyle and Nil, on the other hand, add more interesting perspectives with their chapters; Kyle focusing on the severity of the conflict and state of the world, and Nil on a light-hearted take on trying to make a living in the ruins of a post-Gigant world.

Through each chapter, you explore a number of dungeons for varying plot reasons, which usually amount to just “get in that dungeon and kill some monsters.” The first-person dungeon crawls make up most of the main gameplay, but there’s been a number of adjustments made to ease up on the confines of the system. You’re unlimited in your number of steps or attempts at dungeons, and there’s plenty of variety in routes through each expedition, so you can avoid more difficult encounters if you feel unprepared. Developer Experience also made a smart move in doing away with random encounters, instead having enemies be static squares on the map, with most of them being optional and off the critical path to the final objective.

Most dungeons offer different routes and optional enemies to grind.

Each dungeon also contains a save stone, which does what you expect, but also refills your action points (AP) and health, as well as revive any fallen team members. Finding the save stone also unveils the entire dungeon’s layout, including all enemies and loot. Most dungeons let you replay them after completing the story objectives within, so you can grind out extra levels if you find yourself falling behind against tougher enemies.

These many changes put together make it much more approachable to go spelunking through Ray Gigant’s environments, and cut out the difficulty in having to weigh the risks of every step I take and move I make.

Combat eases the burden more, as your three party members each execute commands like attacking, healing, guarding or casting spells. Each action eats up your AP gauge, which you can only recuperate by having team members wait out a turn. It becomes an interesting balancing act of measuring when to go on the offense, versus when to wait it out and rebuild your AP gauge. You further have to weigh these choices by deciding what to equip to your party members’ loadouts – choosing whether to make a defensive or offensive kit for each member affects how you’ll be able to adapt to different combat situations.

While I appreciated the options and choice given to me in combat, though, most of that complexity was an illusion, and unnecessary to progress. Combat in Ray Gigant might initially seem intricate, but by the first major boss battle, I had developed a rhythm of actions I could repeat ad nauseum to victory. A victory that came, by the way, not through typical combat, but usually through the Slash Beast Mode.

Slash Beast Mode is an interesting concept, but makes fights that should be difficult much, much easier.

A super-powered attack you can unleash in battle once you’ve filled a separate gauge. Activating Slash Beast Mode starts off a rhythm game, where you input attacks to the beat of the song, unleashing your protagonist’s inner Yorigami power to unleash dozens and dozens of strikes in a single volley. It’s a really cool feature, one that’s certainly unique and interesting, but in practice it means that you really only ever have to lower a boss to 50 or even 70 percent of their health, and then activate Slash Beast Mode for an easy victory.

That level of ease is where the rubber met the road for me in Ray Gigant. While I appreciated the streamlining of dungeon crawling and interesting touches on the standard RPG formula, the overall experience ends up feeling a bit too easy to run through. When any notion of challenge is gone, even the least mundane activities start to feel like busywork or chores to proceed forward, and it lacks any feeling of urgency or drama. Boss battles in Ray Gigant are huge, beautiful affairs, but they lack the sense of overcoming adversity to make them as climactic as they should be.

Even early boss battles are impressive, and feature some nice animation.

Though it’s a bit easy to clear them, many of the battles in Ray Gigant are gorgeous. Stunning character animations and a stylistic approach to the world, from the supporting cast to the monsters and dungeons, gives Ray Gigant a vivid style all its own. Major bosses can be the size of small city blocks or even bigger, and battles reflect that as your party members take up station around the massive creature. As you switch between different vantage points to issue orders, it pans around to different areas around the bosses. Your sniper might be a ways off, in a place where they can launch attacks safely, while your tank / attacker is up close and at eye-level with this gigantic creature on top of a construction crane, and your mage overlooks it all from a skyscraper, able to identify who needs healing immediately.

So while it fails to develop fully or even challenge me, I still feel compelled to progress in Ray Gigant. The world is unique, the characters are well-designed and (mostly) endearing, and the streamlined play means I’m never frustrated by bad RNG or annoying quirks in the system. I might not be perfectly challenged by Ray Gigant, or even find the depth that others have found in similar dungeon crawling games, but this game gives me enough to finally give this genre a chance. In some ways, that’s an achievement all its own.

Ray Gigant sacrifices complexity for accessibility, and while the final experience is a little rote, the style and streamlining make the most compelling case for a non-fan of RPG dungeon crawling to finally get interested.