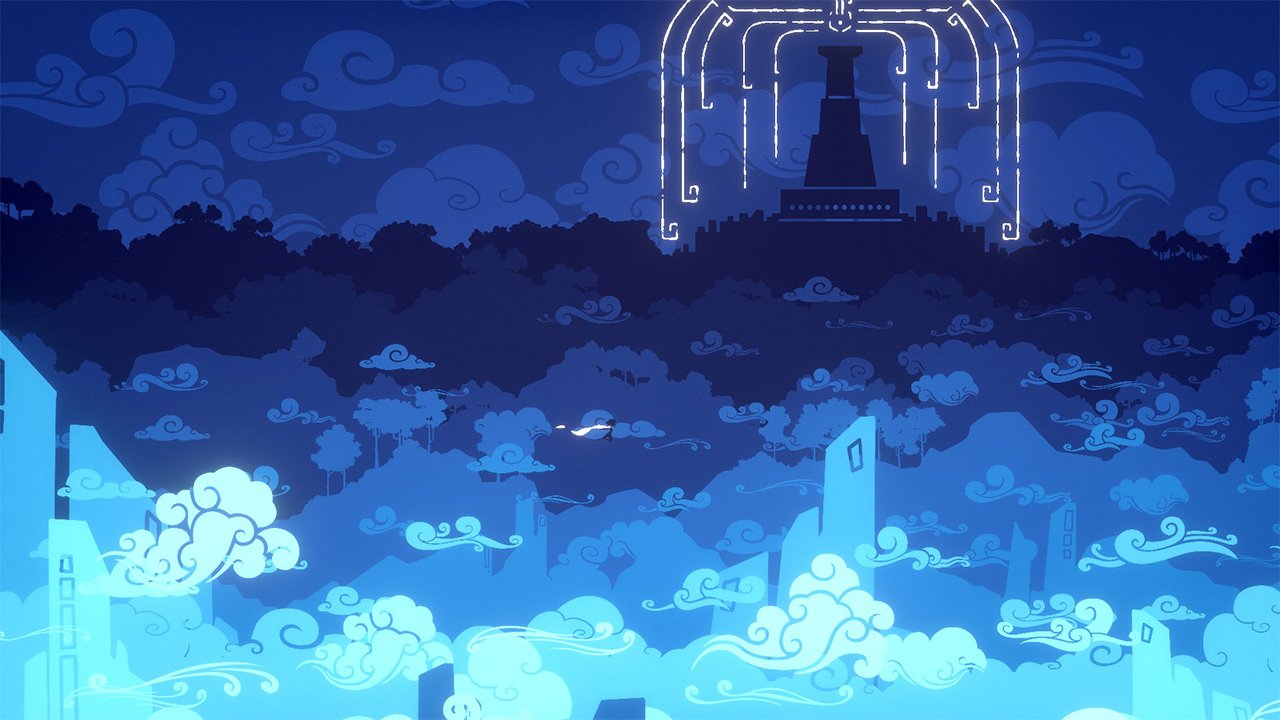 The ostensibly ancient lineage of the platformer genre can be traced as far back as the late ‘70s. Since its inception, it seems as though every developer has had a chance to brew up their own 2D platforming experience. Indie developers of today still look to the genre as the vehicle of choice to share their innovative ideas with gamers. The King’s Bird, inspired by the speed of Sonic, spurred on by the storytelling of games like Limbo, and coached by precision platformers like Celeste, is the next game to put its own twist on a genre thriving off of creativity. But while the groundwork is there, the stiff, unfocused design proves that the student won’t be joining its platforming idols anytime soon.

The King’s Bird is, without a doubt, a visual and auditory stunner worth experiencing for those two things alone. Each area spotlights a single color in various tints and shades forming looming background structures and landscapes, contrasted by an equally stylish, silhouetted foreground. Booming, infectious melodies cheer you on as you make your way through five unique zones—three of which take up the majority of your playtime.

The artsy tag team is trumped only by the prospect of challenges to come as you whip around a village with grace and speed during the game’s opening minutes. Described as a momentum-platformer, The King’s Bird combines jumping, dashing, and gliding to create a fast-paced experience that presents itself as Sonic on steroids. Each surface you touch resets your movement abilities, allowing you to chain together a series of jumps and dashes to build up speed, transitioning into a glide if necessary to reach greater distances. But enjoy your freedom while you still have it, because the game has a different vision for its movement mechanics.

Loose, speedy movement warrants larger play spaces, but The King’s Bird decides on tight, claustrophobic level design for the better part of the game. Rather than encouraging freedom of movement, the game centers on reining in your character and limiting momentum to avoid flinging yourself into the game’s signature spiked surfaces or toxic pools. Players are taught to fear speed, not to embrace it. As you clear more and more levels, the suffocating environments open up to reveal more speed-oriented obstacles, including Sonic-esque tunnels and long-distance glides, finally encouraging momentum to cover large distances. Even so, a few seconds of speed in a strictly controlled environment is far from reaching the true potential of the game’s movement system.

Uncontrollable physics and slippery movement make achieving the precise jumps demanded of you more annoying than fun. A game like Super Meat Boy or Celeste can get away with precision platforming, but The King’s Bird’s controls lack the responsiveness of those titles while demanding the same level of perfection in movement. Luckily, each level is littered with an abundance of checkpoints, dividing each stage into a series of 10-15 second chunks. Make no mistake, the generous checkpoint system is counterbalanced by the game’s substantial difficulty. Repeating a single maneuver dozens of time becomes common by the time you enter the fourth zone—manageable were it not for the repetitive challenges.

After a hard-fought battle, a handful of similar challenges await you—all within the same level. Again, a dismissible non-issue had the game continued to test your skills in newer, exciting ways, but The King’s Bird’s formula for ramping up difficulty is always the same: add longer gaps and more spiky surfaces. There are too few breaks from the monotonous levels and dissatisfaction from curbing your capabilities to even begin to alleviate play frustration.

What could have been a promising story didn’t prove to be a worthwhile distraction either—instead becoming a generic savior’s journey with an undeveloped narrative. A girl who escapes her small kingdom embarks on a quest to collect various energy sources/totems in order to free the rest of the population. At most, you can expect some interesting visual sequences as you reach various milestones. The textless storytelling leaves a lot to be desired, lacking the effortless environmental storytelling of its contemporaries.

If anything’s worth noting, The King’s Bird’s assist mode hearkens back to Celeste’s accessibility mode of the same name, featuring even more customizable options to fiddle with if you find the game too challenging. Here you can adjust the game speed, health, checkpoint skipping, air resistance, and more. However, enabling assist mode means you forfeit a place on the leaderboards for every level you use it for.

The King’s Bird is still an enjoyable game, but with the platforming genre seeing indie hit after indie hit in recent years, there are far better alternatives for its price point. Beautiful aesthetics and an interesting movement concept, but the heart of a good platformer lies in its level design. Sadly, the game couldn’t deliver on that front.

A self-deprecating, overly sarcastic pair of glasses that occasionally possesses a human host in order to partake in the delightful process of playing video games, then immediately complaining about them. When he is not playing games (a rare occurrence), he can be found either writing about things that no one cares about, or haunting the quiet streets of his Canadian suburb.
Related Articles: Indies, The King's Bird
Share
Tweet
Share
Submit