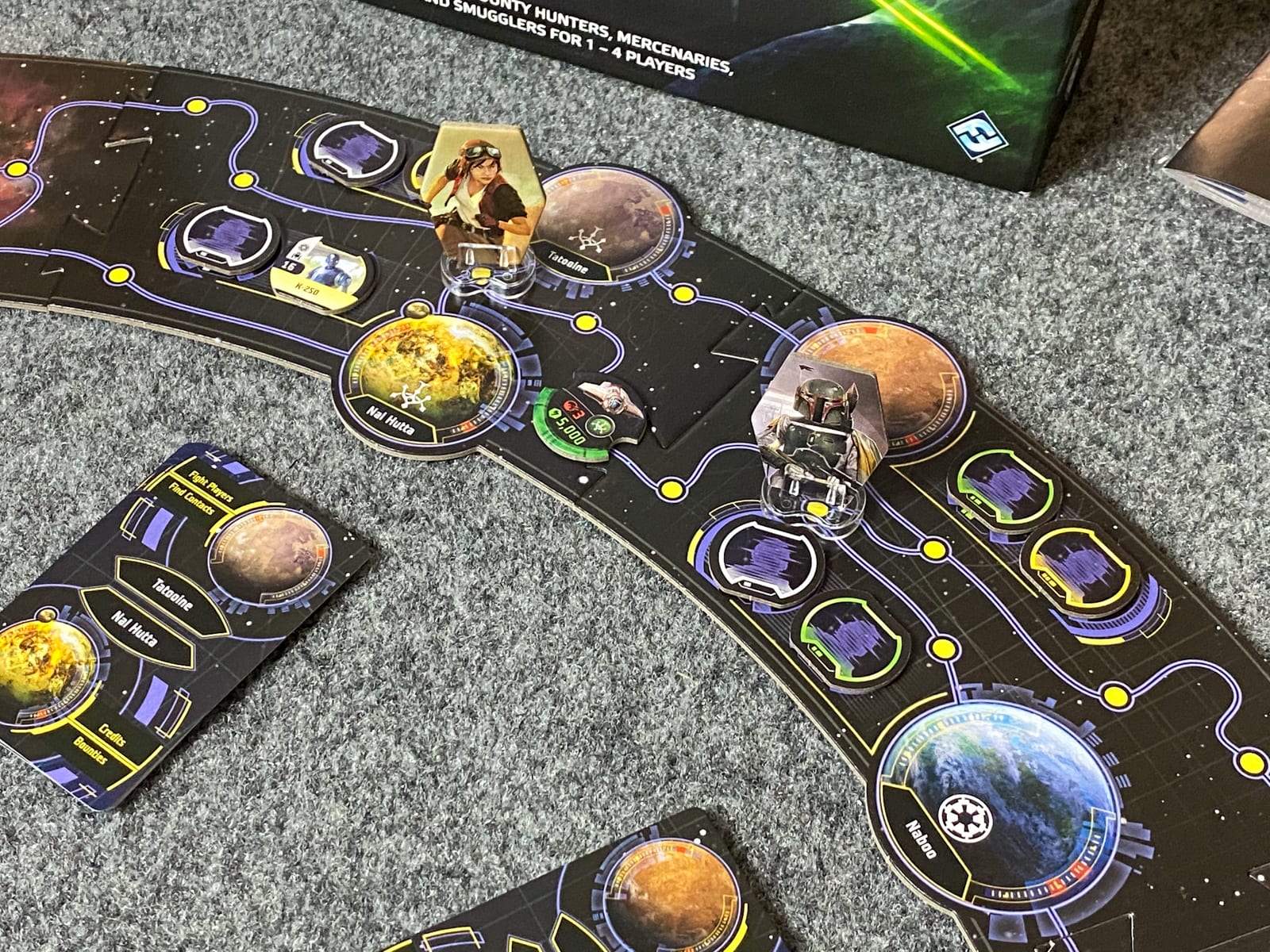 Have you recently binge-watched the Mandalorian on Disney+? Watched the Star Wars Holiday Special and still think Boba Fett’s cool? Substituted a Jabba the Hutt chuckle for a Santa laugh at Christmas? If the dark, gritty underbelly of Bounty Hunters and smugglers in Star Wars sounds like the best theme ever for a board game, then you might want to check out Outer Rim by Fantasy Flight Games- You’ll never find a more wretched box of scum and villainy. 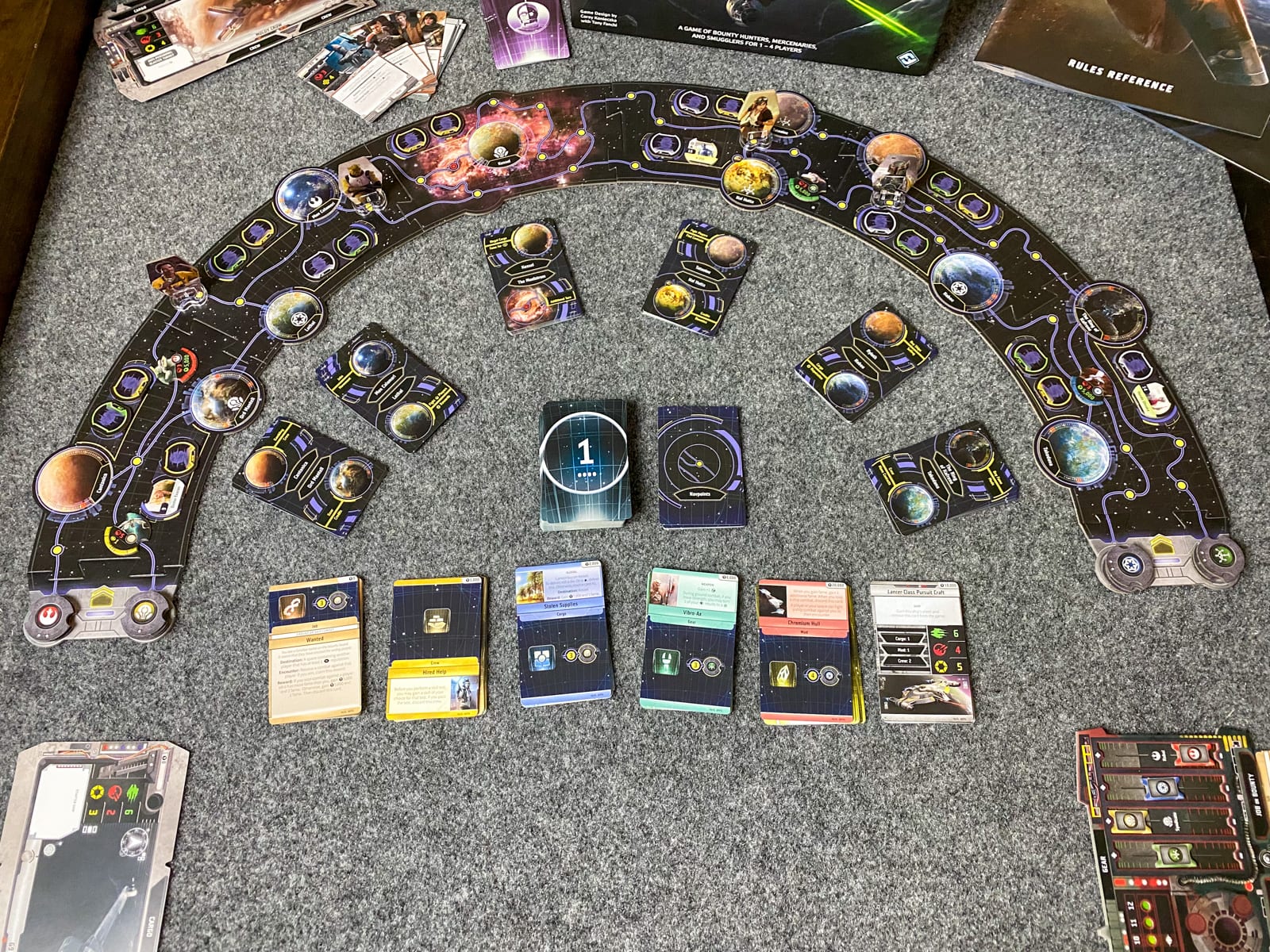 Not your typical game board

Star Wars Outer Rim is a delightful romp through the seedier locales of a galaxy far, far away, where 1-4 players bounty hunt and smuggle their way into fame and fortune. To start the game, each player selects one of the 8 outlaws, which include movie canon favorites such as Han Solo or Lando Calrissian, bounty hunters such as Boba Fett and IG-88, or more obscure characters from comics and cartoons such as Dr Aphra and Ketsu Onyo. You’ll notice that there is a distinct lack of lightsabers and jedi robes- this game is not about the centuries-old struggle between the Jedi and the Sith, and in fact after several games I barely remember them being mentioned. Choose between two basic rock-hoppers, grab one of the player boards, pull out the appropriate numbered databank card to reveal your starting position and starting job or bounty, and get ready to become the most famous scoundrel in the galaxy! 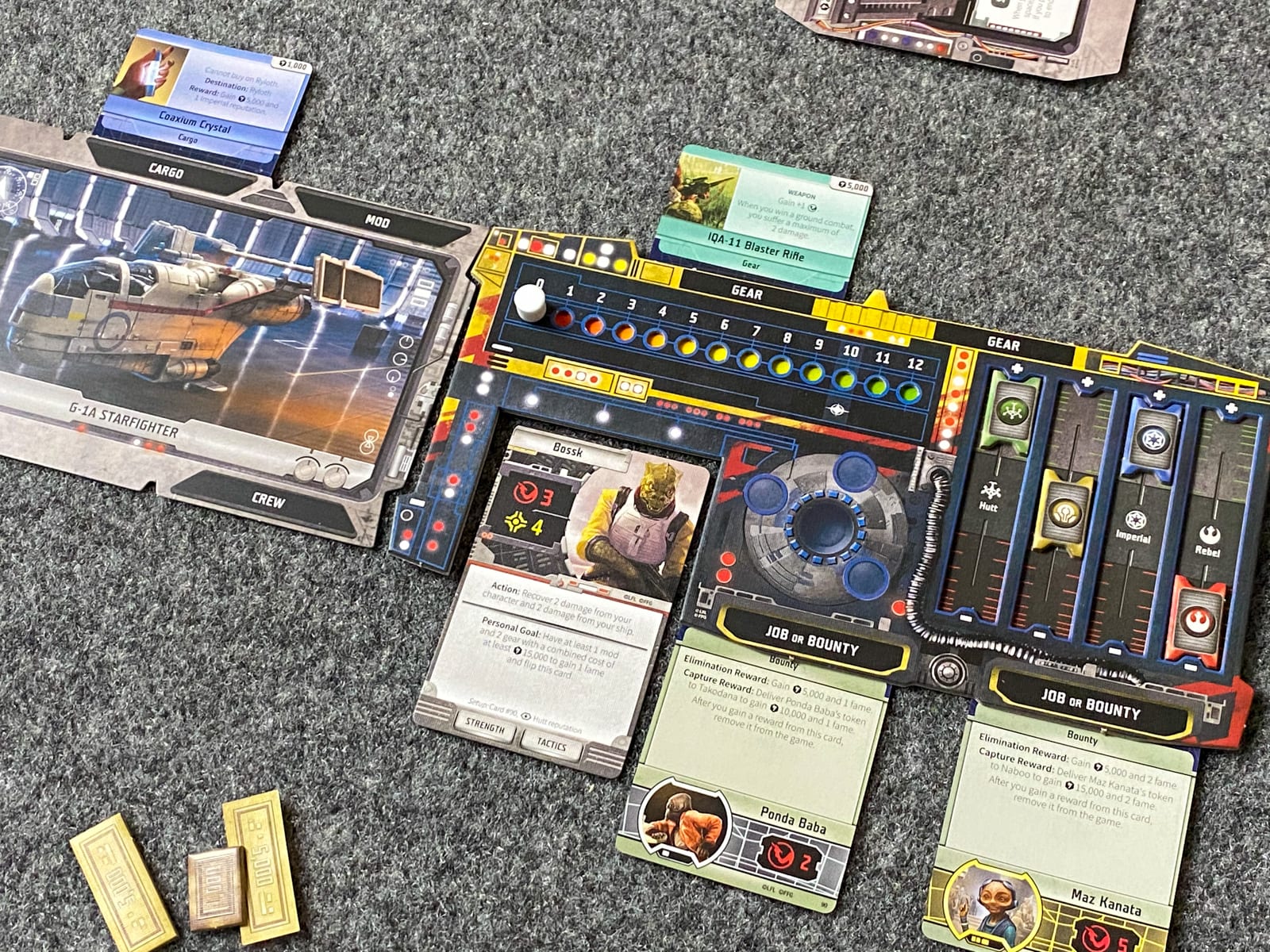 You play one of many infamous pilots/smugglers/bounty hunters from the Star Wars universe, flying around in your ship and boosting your fame to win.

The core of the game revolves around doing jobs, delivering cargo, and completing bounties (essentially, quests) to amass credits and score fame- the first player to reach 10 fame is the winner. Cargo delivery is simple: pick up the cargo on one planet, and drop it off on another to claim your reward. Bounties will have you jumping from planet to planet, revealing encounter tiles that correspond to three color-coded tiers in the hopes that you find the droids you’re looking for. Once you fight and defeat them you have a choice- kill them now for a reduced credit and fame reward, or deliver them to a specific planet for the full bounty. Finally, jobs are a little more unique, and typically resolved by flying to a planet and following the corresponding databank card or passing a skill test. Additionally, your character has a unique personal goal, which always results in a fame point or two and sometimes grants you a new special power.

While you’re cruising through the Outer Rim, you can also choose to draw encounter cards on planets and navigation points. Each section of the board has two planets on it, and one corresponding deck. The top part of the card represents one planet, the bottom the other. Each planet has a theme that indicates what you might expect when you flip that card, and these encounters can very quickly positively or negatively impact your game. Also, when you are on a planet, you can make purchases from one of the 6 market decks. This is where you go to get bounties, jobs, cargo, gear, and even ships. Speaking of ships, you’re going to want to upgrade from your dinky starting vessel as soon as you can, because you’ll need the extra mod, cargo, and crew slots, because who doesn’t want more stuff? Ships, like your character, have goals as well, and once you flip them over they go from “generic ship that looks like the Slave-1” to “Oh hey, it’s the actual Slave-1”, and if you AREN’T playing Boba Fett, and someone else is, know that they will hate you with the blistering heat of a thousand suns for claiming their ship… To further complicate things, there are four factions in the Outer Rim that you need to contend with- the Hutts, the Syndicate, the Empire, and the Rebels. Your reputation with these factions may determine job and encounter outcomes, as well as put you in the crosshairs of one of their patrols that move around according to newly drawn market cards. 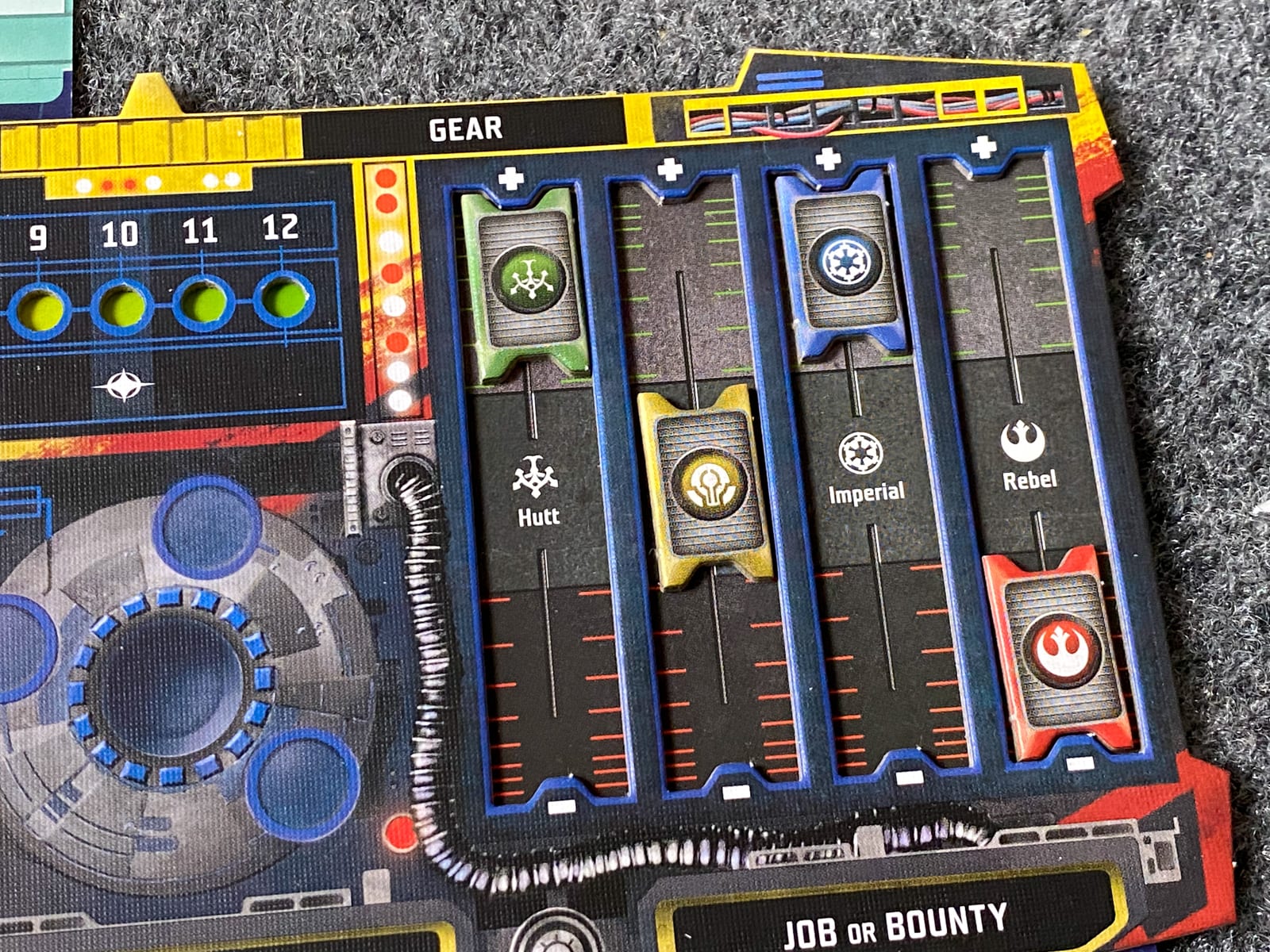 Popularity with the different factions can have beneficial -or adverse- effects on the game.

If you’ve played any of Fantasy Flight’s other Star Wars titles, the visual design is going to look very familiar to you, especially if you’ve played X-Wing or Legion. Outer Rim utilizes the same visual and conceptual languages, and every symbol in this game means roughly the same thing in their others. The 8-sided combat dice are identical except for the color, and character and ship artwork use the same assets. This game very much fits within the overall vision Fantasy Flight has for the Star Wars franchise. Honestly, this turned out to be a double edged sword- In some ways the game rules were easy to pick up since I understood what the stat symbols were, or the difference between the solid and hollow blast pips on the dice. In other ways that familiarity tripped me up, as the mapping of concepts between the two didn’t always match up.

Now, the question is: “how does it play?” Well, a lot like a streamlined version of the Firefly board game- cargo delivery, jobs, flying around through space in your ship with your crew. We have here, essentially, two hugely popular space fantasy franchise themed boxes full of fetch and delivery quests, and Outer Rim is banking on the idea that you are craving that sort of thing in a shorter play experience with the setting that inspired this one to begin with. And with Firefly being a considerably heavier and longer game with a lot more cognitive load… they might be onto something. The thing is, despite all of this stuff that comes in the box, all these databank cards, all these market cards, planetary encounter cards, they might have cut a little too deep. After a few games, you start to realize how anemic the core path to victory is. Which is a bit surprising, considering how much there is you can do in the game. The problem is, most of it is optional, and I’ve had a couple of games now where nobody ever bothered to draw a single planetary encounter card. It’s a shame, because some of the most interesting and game-changing stuff is hidden in these cards, but they don’t generally help you get fame directly, and they can often set you back. It’s a race to 10, and it generally makes more sense to not take that chance. 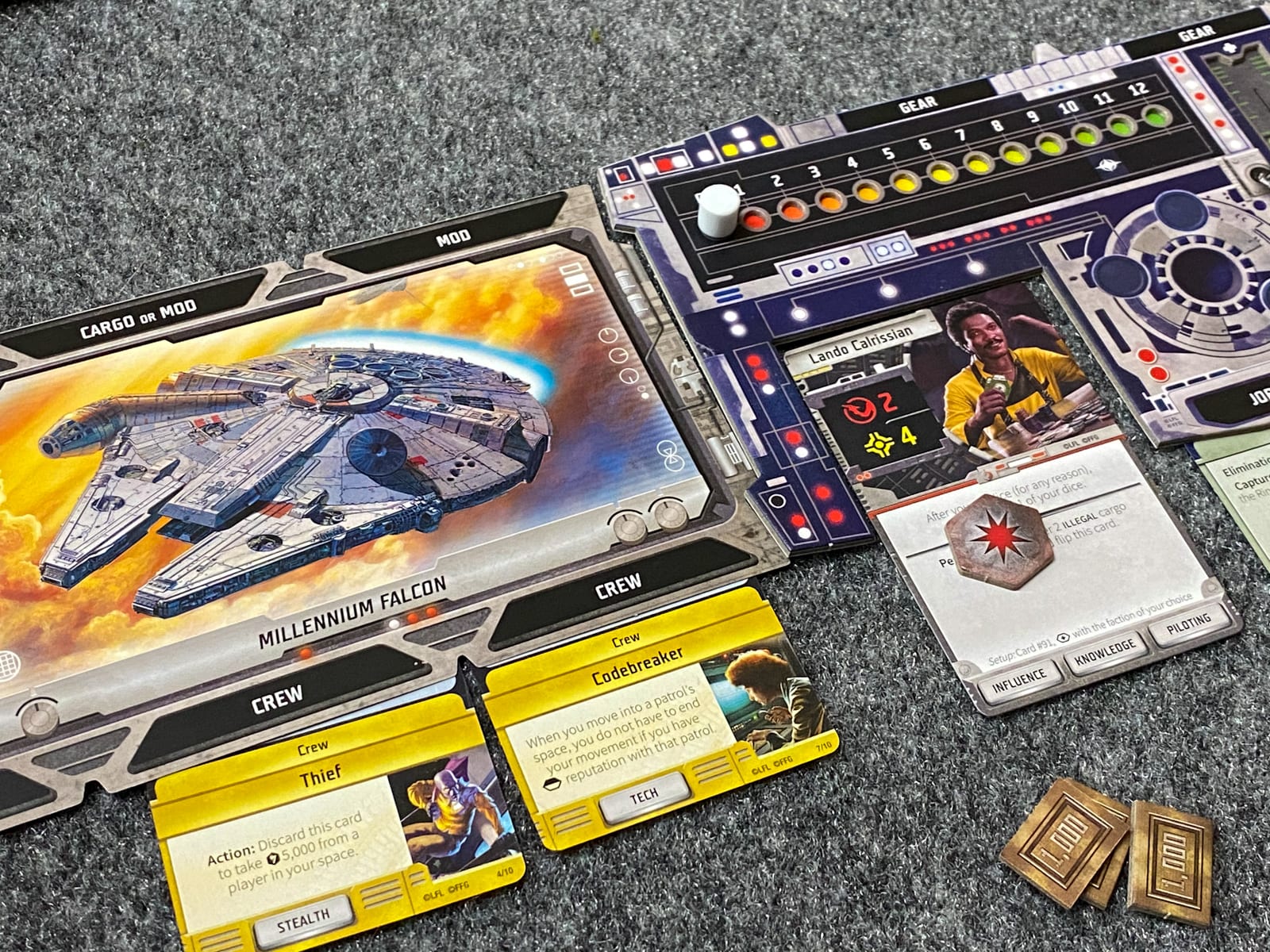 Mods and crew enhance your ship, gear enhances your pilot.

Then there’s the patrol ships- a lot of emphasis is put in the rules and in the cards for the patrols, but encounters with them are fairly rare and easily avoided. Their movement mechanic is clever, with market cards that get turned over after the last card was purchased by a player providing the instructions on which syndicate patrol moves and how many spaces it does so. Naturally, they move toward the player that flipped the card over, and after a few turns of this via different players, these largely ineffectual wandering NPCs start to cross-cross back and forth across the board like a staggering drunk. I just feel more could have been done with them.
Nothing illustrates the game’s dalliance with superfluous features than the single player game. After losing on my first two attempts to play, ready to write-off the whole of single-player thinking it was horribly unbalanced, I realized that the race to 10 fame was all that mattered and everything else was just fluff that had the negative effect of slowing me down. After that it dawned on me that the AI deck yields at least one or two fame per turn for the AI opponent, and if I didn’t hustle and streamline my approach to accumulating fame, I was sure to lose every single time. When I finally did win, I realized that a lot of the best, meaty, Star Wars-y stuff was in the parts of the game I avoided in order to beat the AI to the fame count. So then I have to ask myself, “why am I playing this game?”

Figuring out that a big chunk of a game is pointless (typically the part that’s the most fun, thematically) is a rough realization to come by. It doesn’t make the game unplayable, or even, for that matter, not fun. I mean, I still like Talisman. Kind of. It’s just, when I judge a game’s merits, one of the things I look for, one of the things I think makes a great game, is if there’s a reason for everything in that box. If I took just one thing away from that game and the experience wasn’t really impacted at all by the loss, then why have it in the game in the first place? I mean, flavor is flavor, but these are some empty calories. Don’t get me wrong, Star Wars Outer Rim is very fun, especially with a full complement of 4 players, I just wish it gave more incentive to savor the more interesting and theme-rich parts of the game’s design. In fact, I would LOVE to see a Mandalorian-themed expansion, that seems like a no-brainer. 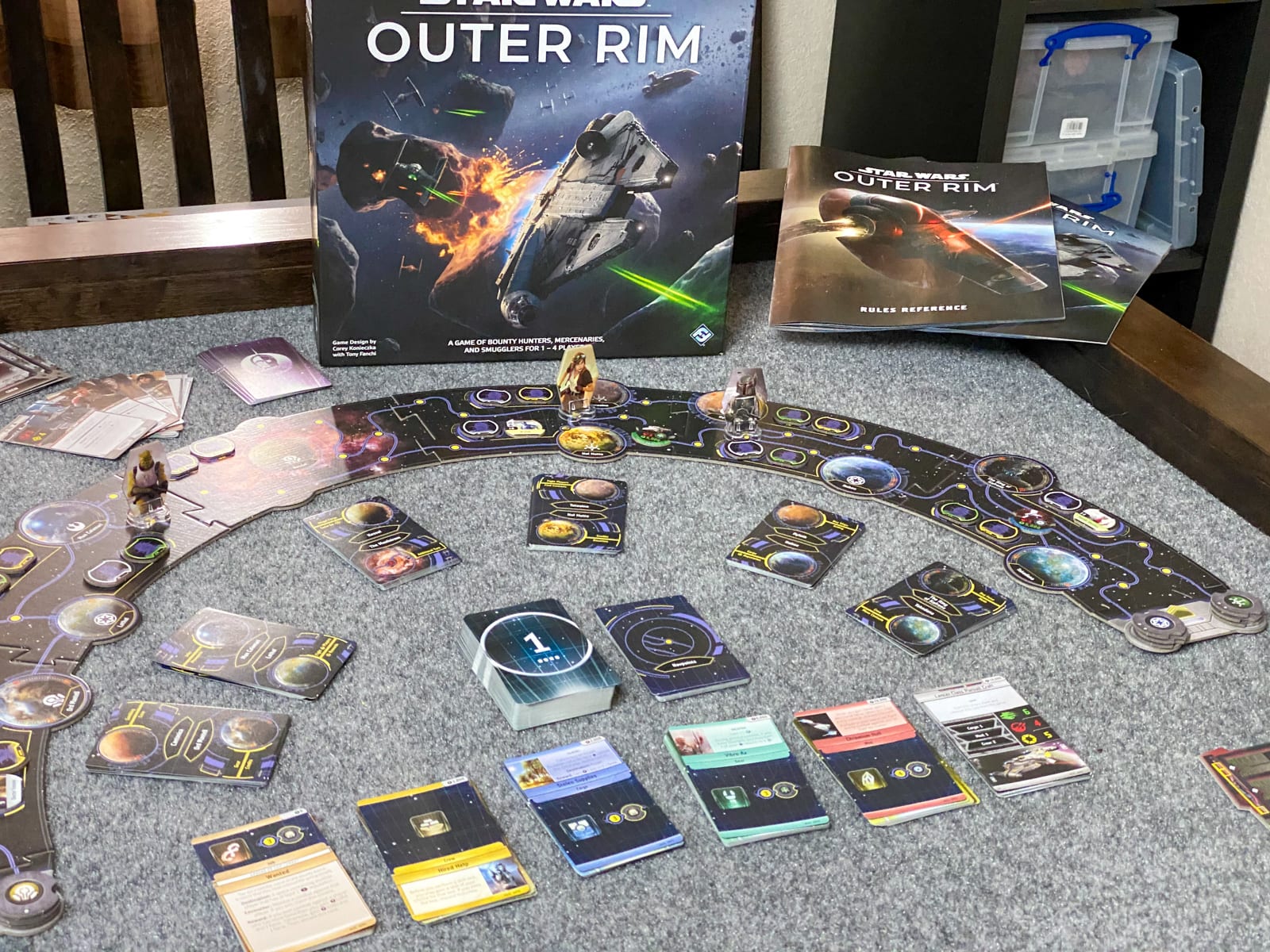 Star Wars Outer Rim is a decent game with an excellent theme, though it ultimately falls short of realizing that theme’s full potential. And while the core fetch and deliver mechanic is solid, there’s a bit too much of having to decide between winning the game or having fun, and the best content in the box ends up being largely inconsequential and unnecessary to a player that opts to go for the quick victory.

Mike Dunn is the old man of Gaming Trend, having cut his teeth on Atari consoles and First Edition Advanced Dungeons & Dragons back in the day. His involvement with Gaming Trend dates back to 2003, and he’s done everything from design and code to writing and managing. Now he has come full circle, with a rekindled passion for tabletop gaming and a recent debut as Dungeon Master (nearly forty years after he purchased the original DMG).
Related Articles: Star Wars: Outer Rim, Tabletop
Share
Tweet
Share
Submit