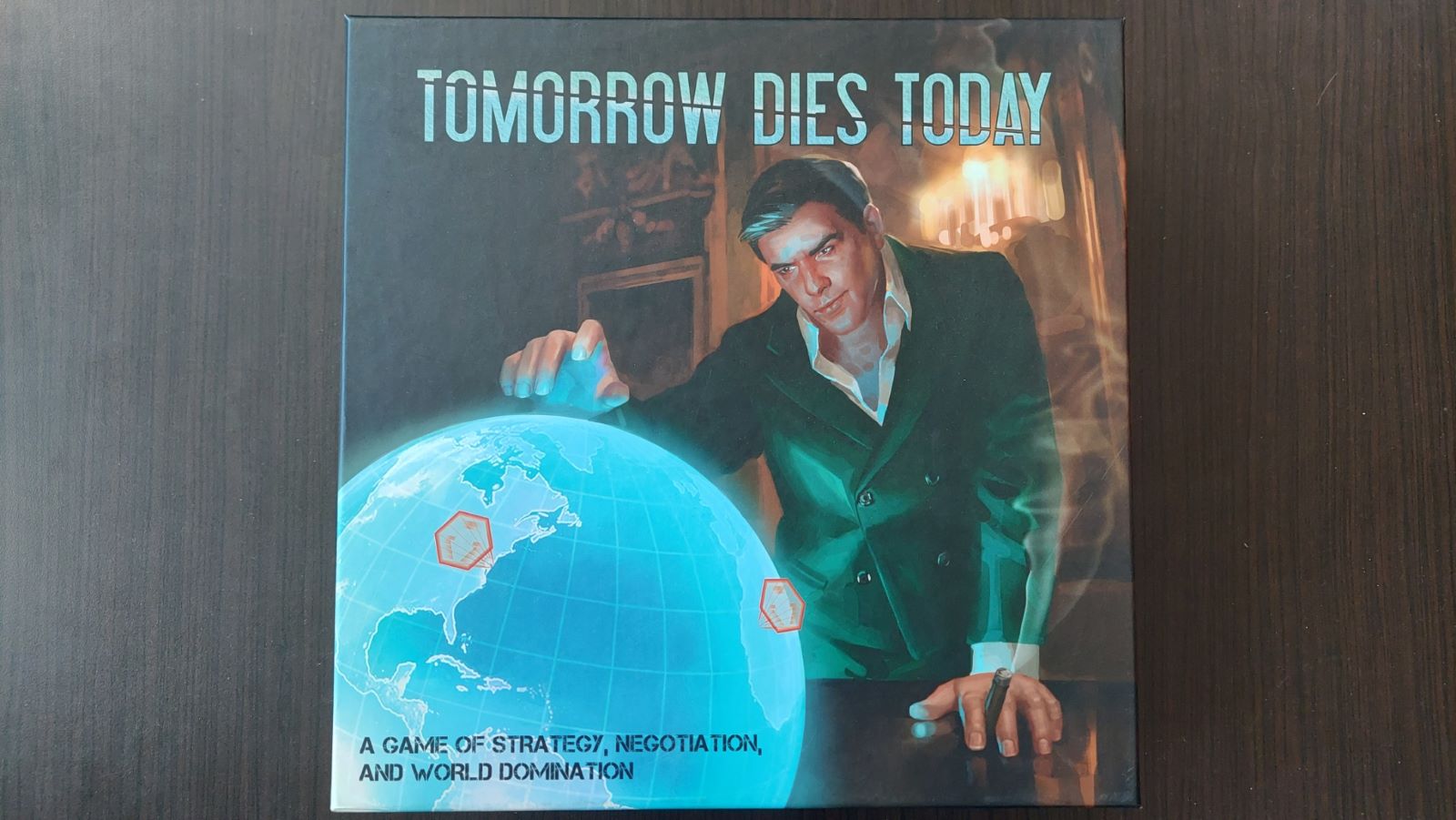 Time for a weird analogy. Imagine a decently sized gold egg firmly ensnared within a thick matted heap of a rat nest. Glistering gold beams pierce the surface, taunting, begging for freedom. It’s in there. Right there. Just waiting to be untangled. Except, after hours upon hours of meticulous studying, prying, and tugging, when an opening has finally widened enough to inspire hope of imminent retrieval, any attempt to do so immediately proves the utter futility of the task. The egg and the nest cannot be separated. The entire nest theoretically could be untangled into some neat order, maybe even woven into something nice to accompany the egg, like a gold egg on the end of a hat, but couldn’t possibly be worth the effort. Tomorrow Dies Today is one such gold infested rat nest, the gold egg being an absolutely brilliant fresh idea and the nest being some of the sloppiest rules and design I’ve ever seen. 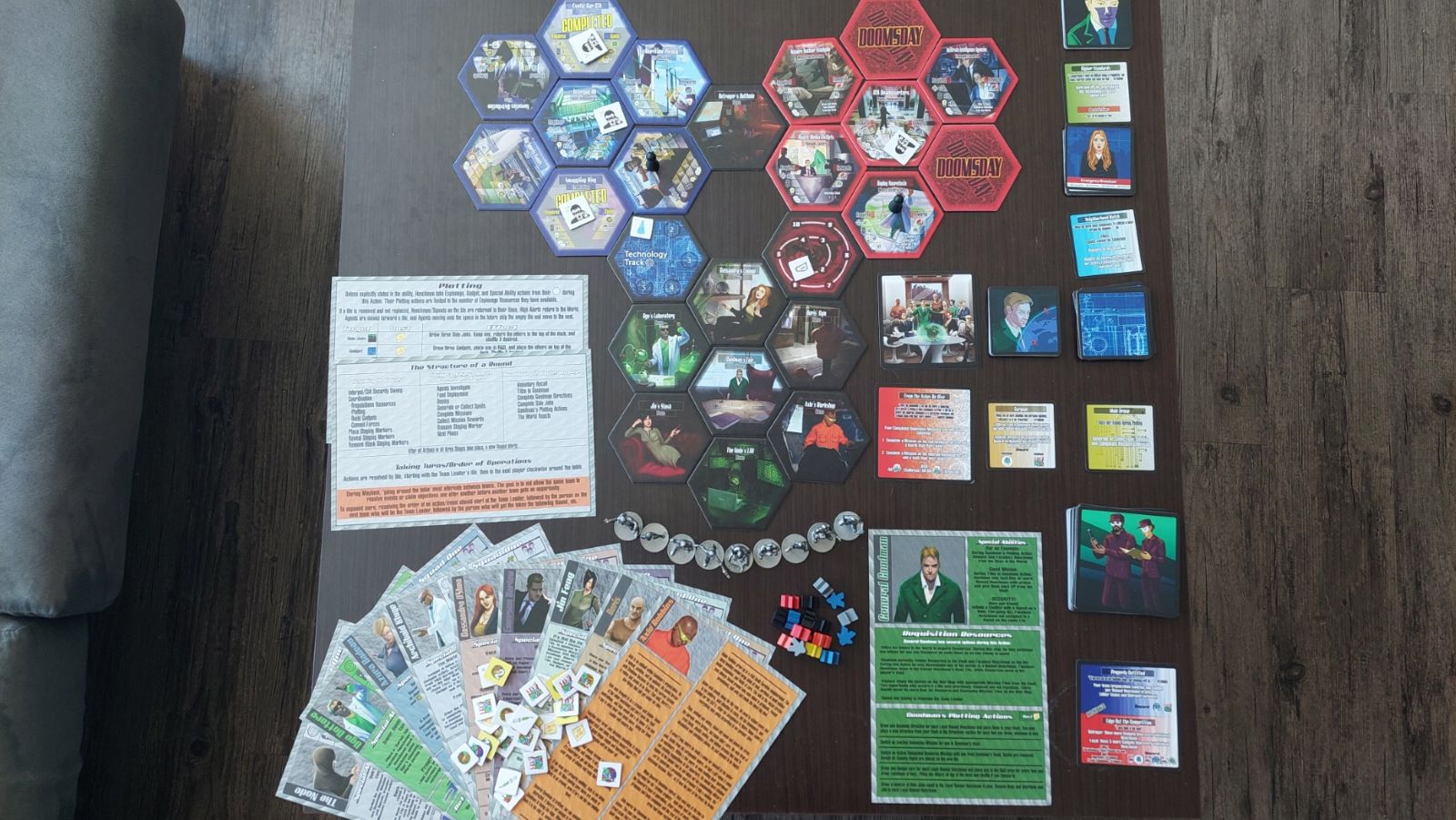 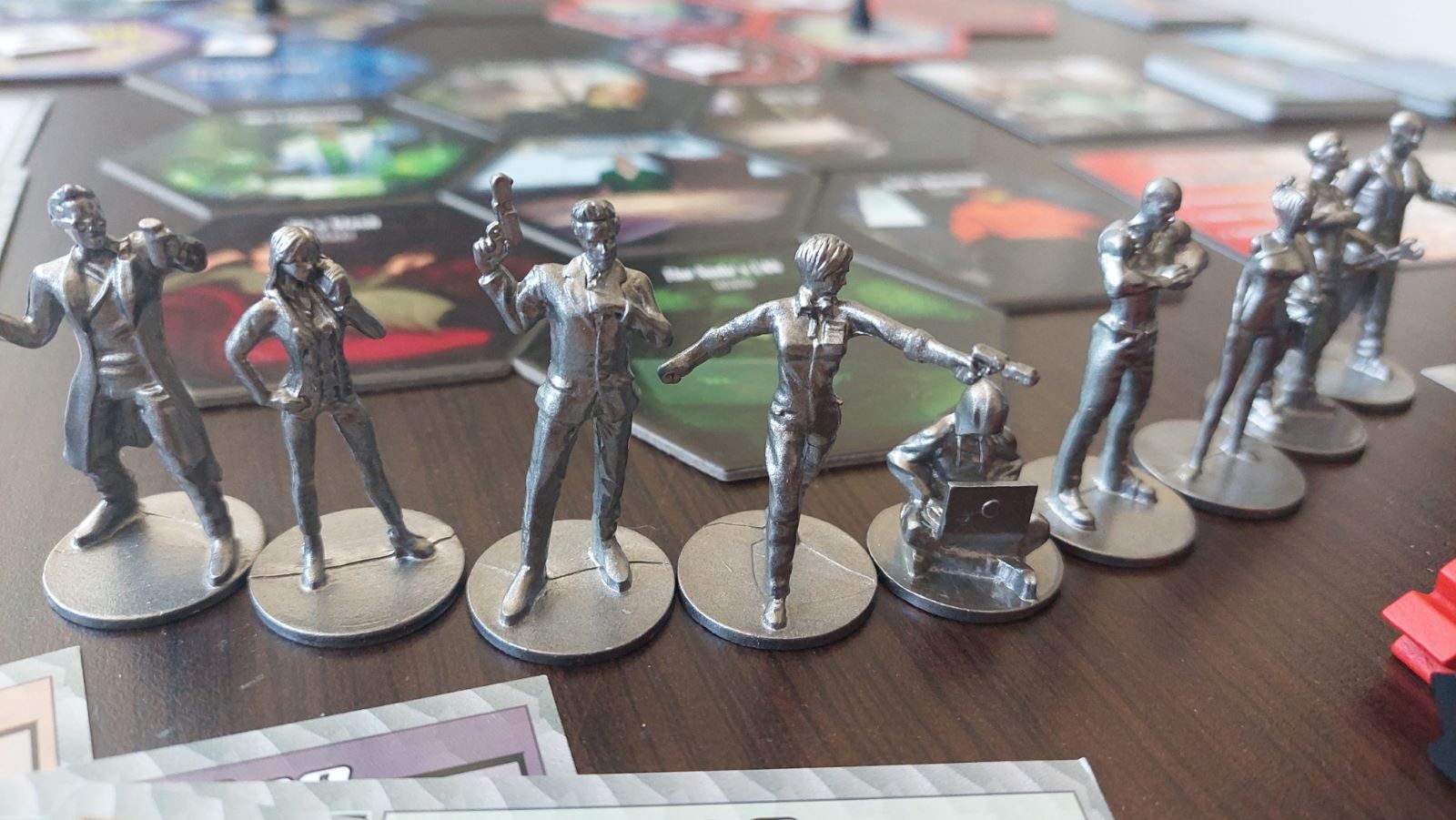 The semi-cooperative mode is called Cutthroat, and it’s by far my favorite one. One player plays General Goodman, the big bad leader of the villain organization. As Goodman, they do not have any pieces on the board and can only interact with the game by manipulating the other players to do his evil bidding. Only Goodman knows the doomsday plan, the organization’s win condition in a sense. Two to six other players play as named henchmen, all with varying abilities, strengths, and weaknesses. If the named henchmen can fulfill the doomsday plan before the end of the last round, Goodman wins, and the named henchman with the most victory points also wins. On the other hand, one of the named henchmen may betray the organization and work to sabotage Goodman’s plans. If the betrayer prevents the organization from completing the doomsday plan before time runs out, they alone win. In order to keep the cogs on cooperation turning, Goodman must maintain balance between players, making sure no one pulls too far ahead or drags too far behind. 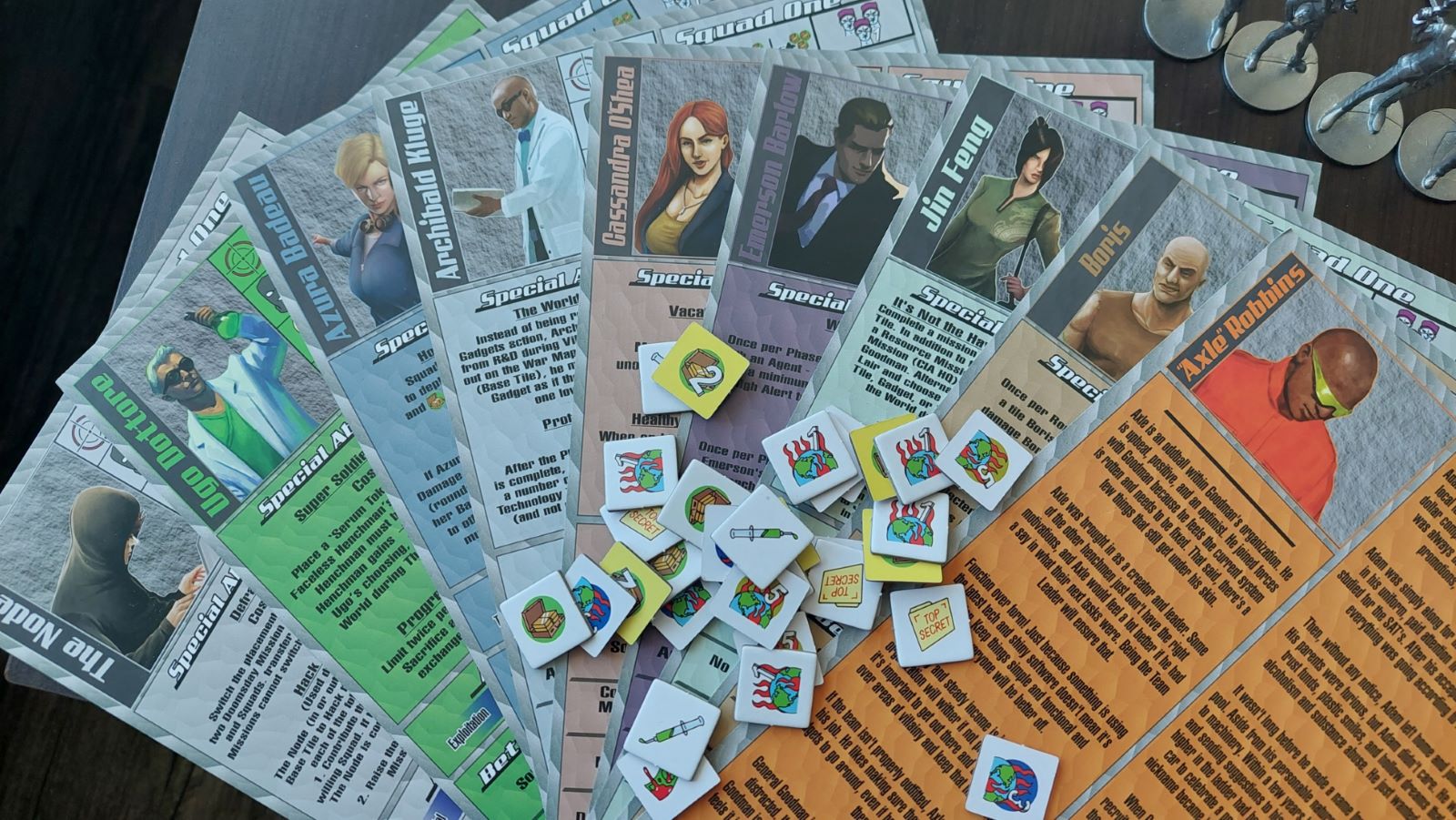 Rounds rotate through three phases each, Scheming, Villainy, and Monologuing. During scheming, players plan their turn and declare what they are going to do, and have an opportunity to manipulate the board or purchase useful gadgets. In Villainy, players complete missions and collect rewards. Players may tithe said spoils to Goodman during Monologuing in hopes of good favor. Also during Monologuing, Goodman may spend resources to lay out new gadgets and objectives, among a few other things. That’s as much detail as I’m willing to go into. There’s much, much, more and it’s a confusing mess.

My first attempt at learning and playing this game was a nightmare. I got stumped a few minutes into setup. The rule book does not show pictures of several essential game components, it’s littered with typos, contains page after page of awkwardly formatted gray walls of text, is infuriatingly unclear, and attempts to explain all three of its game modes simultaneously using color coding. When I saw that the rule book mentions an advanced rule book on the publisher’s website, I thought I was saved, but the advanced rules are no more than a handful of minor clarifications and typo corrections. After discovering the advanced rules I was still unsure how to even play the game. Honestly, the hours of confusion and frustration made me want to cry. For a more detailed experience that closely mirrors mine, check out this post in the BGG forums. 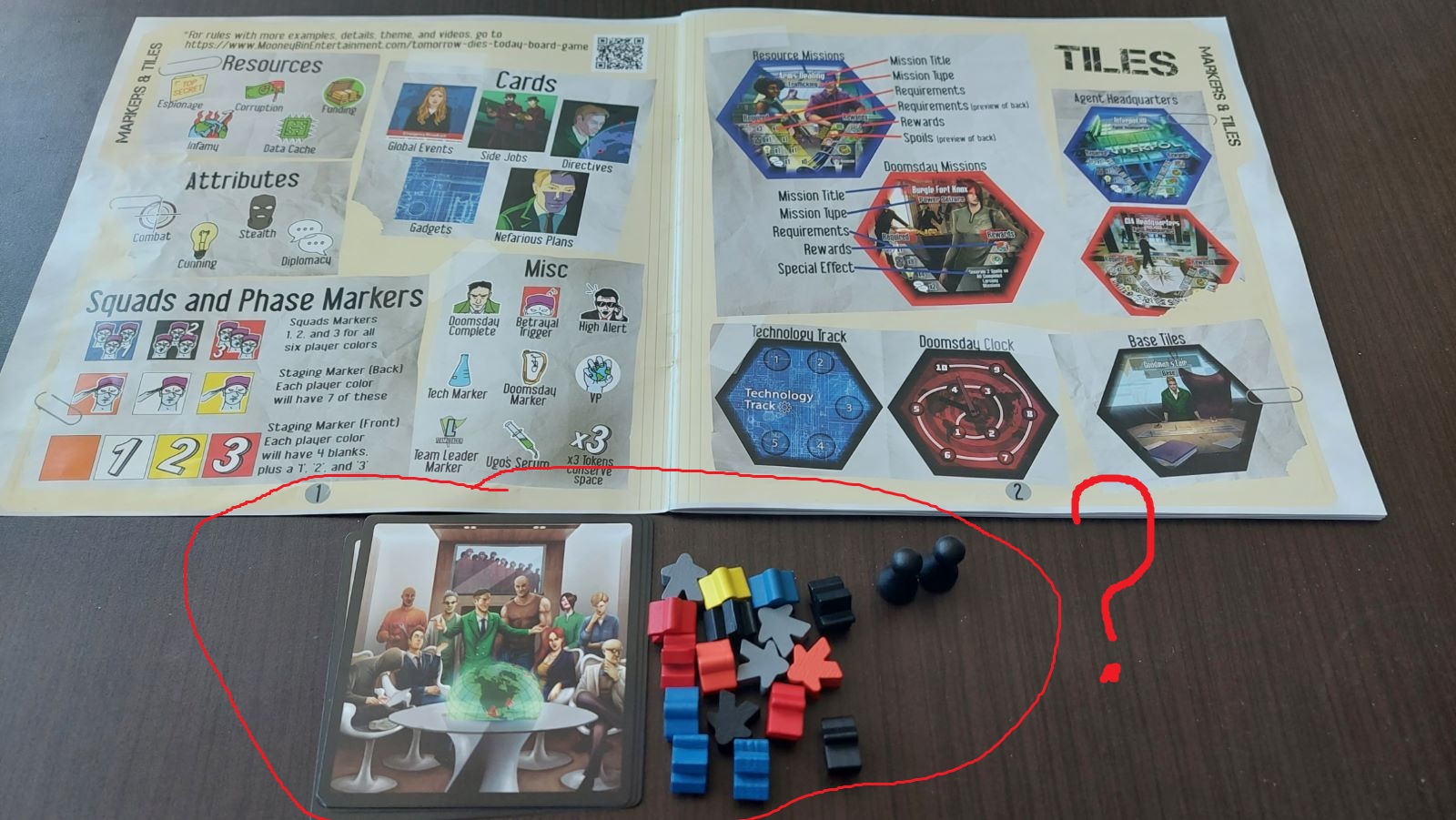 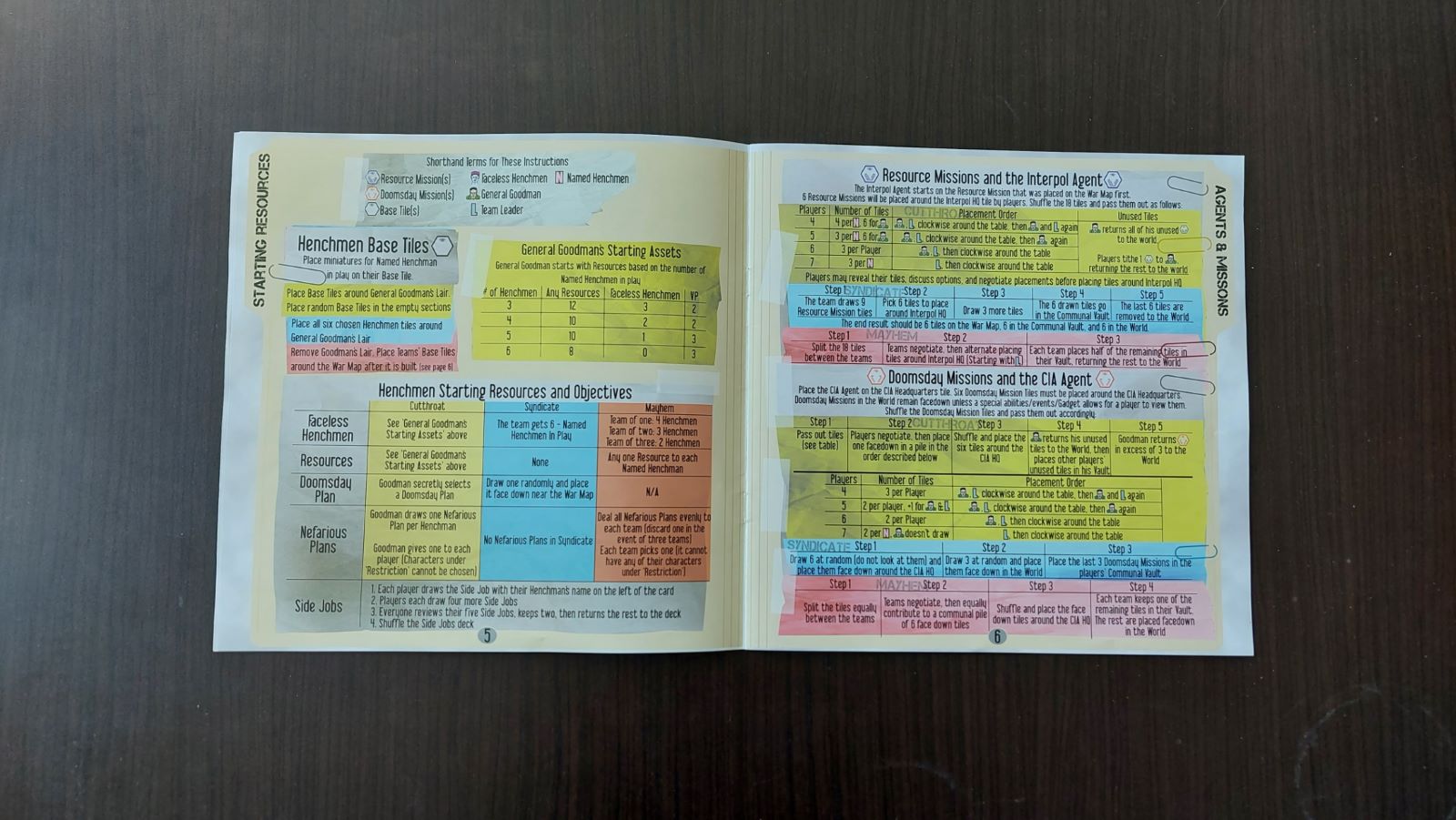 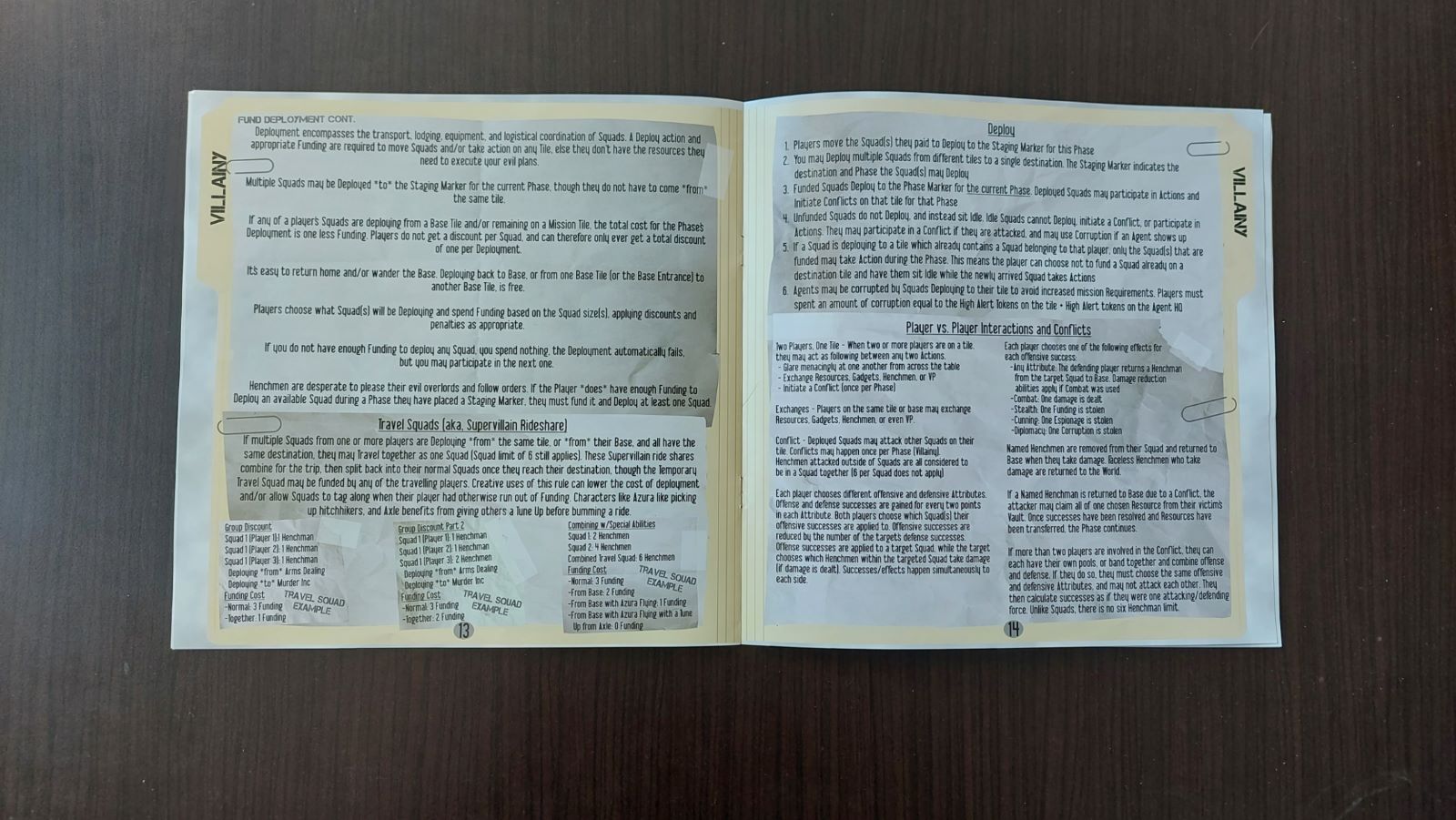 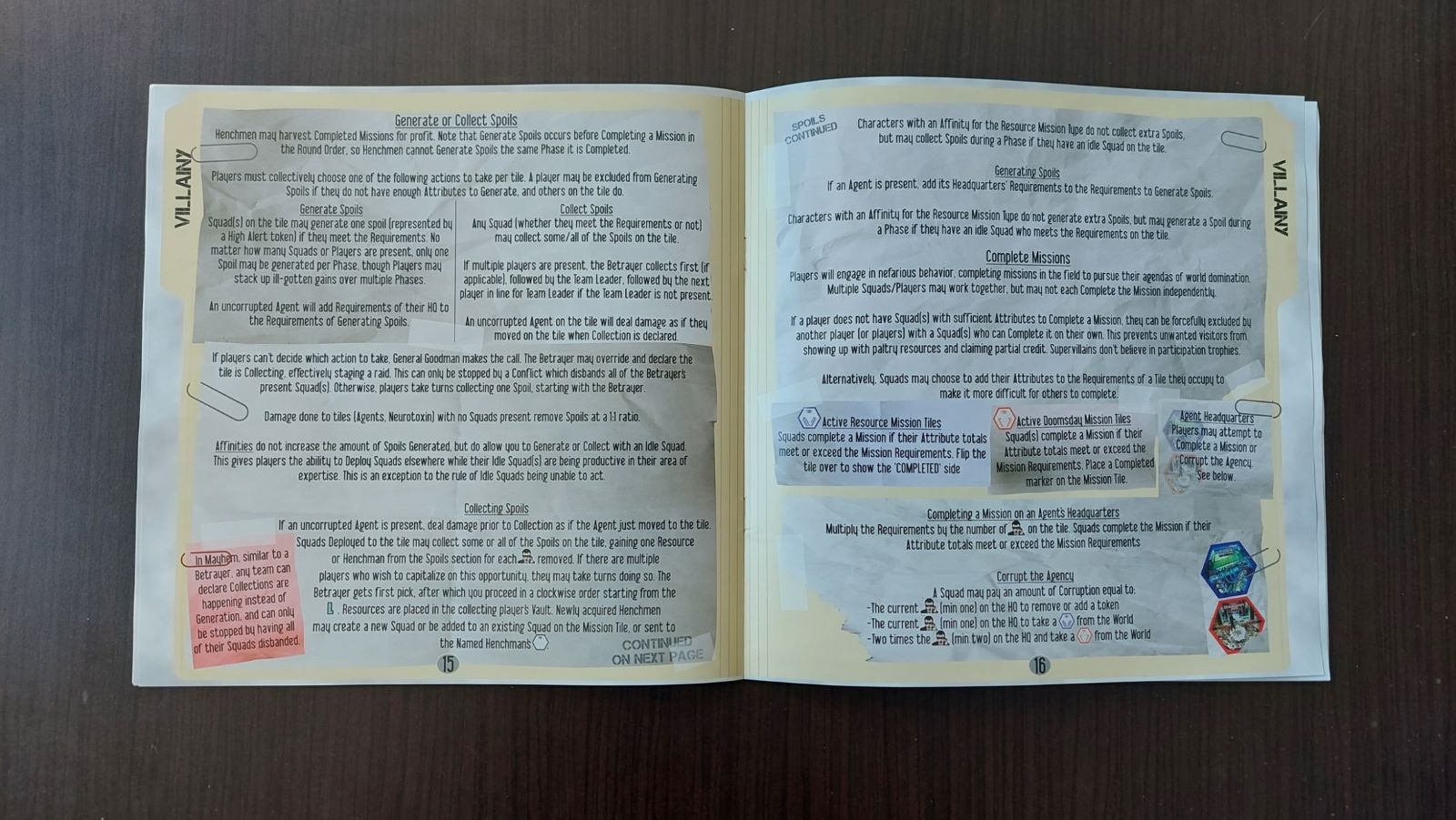 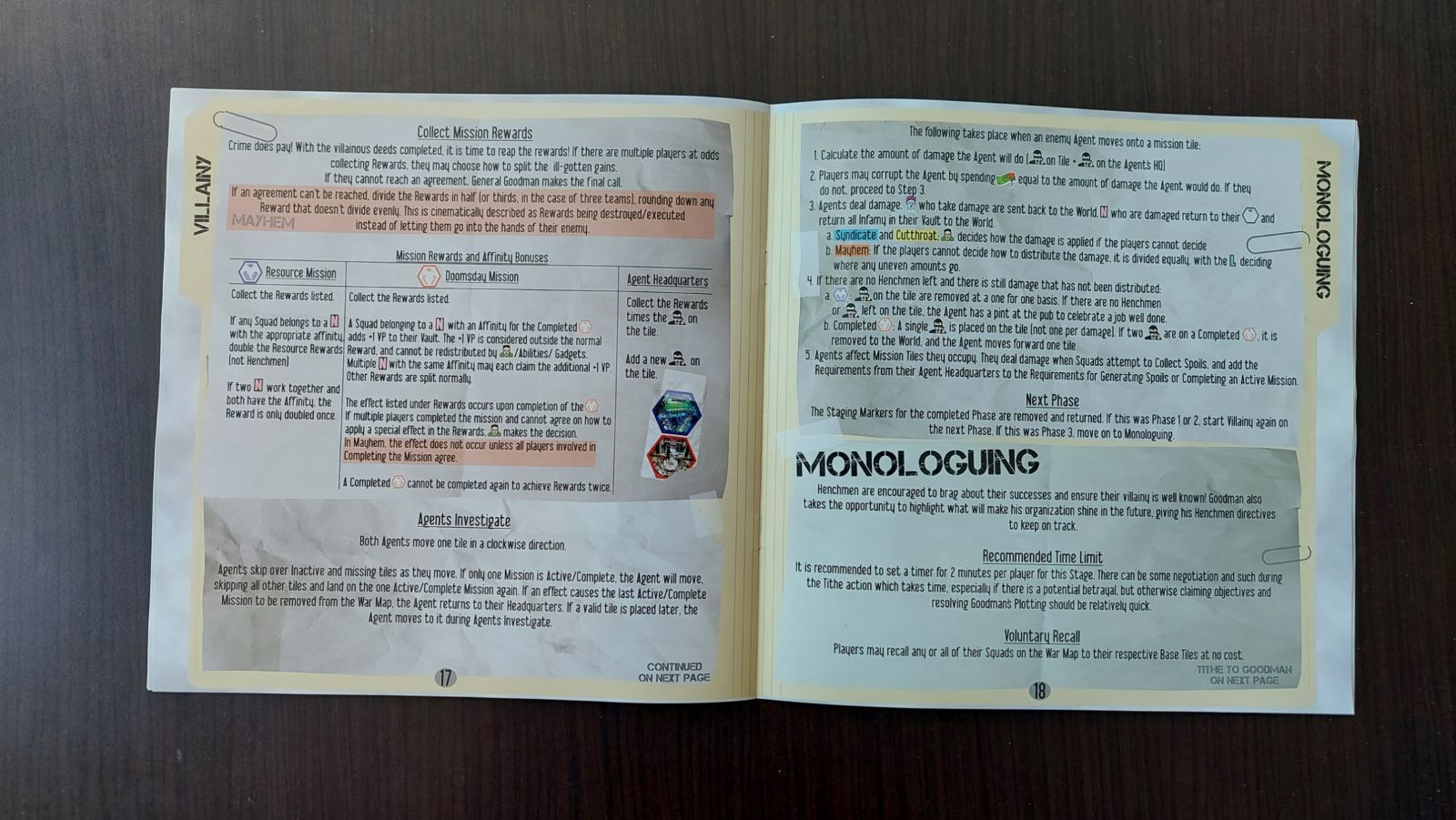 Thankfully, the publishers created a 45 minute how to play video. After watching, I was ready to tackle Tomorrow Dies Today again and play an entire solo game followed by a mock 4 player game of Cutthroat by myself. I put around 13 hours into Tomorrow Dies Today before I played it with anyone else. Unfortunately, even with a comprehensive understanding, Tomorrow Dies Today is intricate, to say the least. Teaching it is extremely difficult. In order for a game to run smoothly, as much as it can, everyone should watch the how to play video before the game night. A 45 minute investment before a teach before a 4-6 hour game is a huge ask, an ask very few games have ever gotten away with. Learning this game was like learning how to drive by reading a 3,000 page manual which describes what most physical parts of the car do and how they function, without telling you how to actually drive. That part you just have to figure out through a comprehensive understanding of the mechanics. So frustrating.

After the brutal learning period, I grew much more excited to play it with others than I expected I would be. My imagination went wild thinking of utterly unique interactions I would have playing as General Goodman. Acting like Doctor Evil and ordering people around just sounded like a blast. I was also hopeful the teach wouldn’t be nearly as bad as my own experience for two reasons: I felt I could explain the overall game better than the rule book, like the how to play video, and I thought the thematic fit of my henchmen not really knowing what they were doing would function in everyone’s favor. Sadly, my hopes were not actualized. 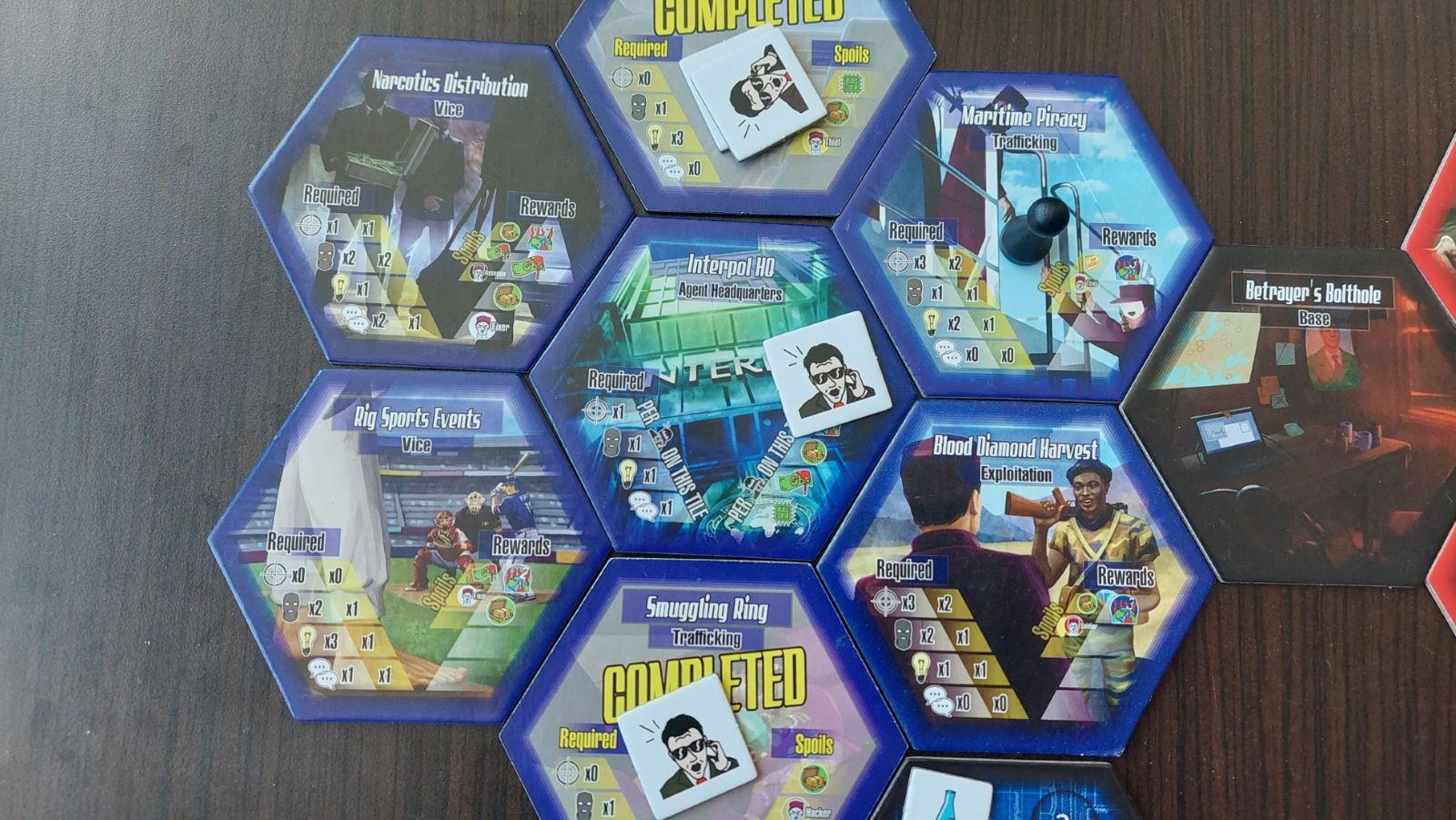 My friends and I all agreed we had fun hanging out together but thought the game was, well, to quote a friend, “Five hours I’ll never get back.” To name a few problems, the overwhelming plethora of mechanics effectively nullified the decision making capabilities of most players, meaning I simply suggested what I wanted them to do and they did it. My players had very little conception of victory point distribution or game progress. When one finally betrayed, they did so just to see what would happen and had only one turn to try and slow us down before we completed the doomsday mission. By the end of the game, most players were still trying to understand the game let alone the strategy. And silliest of all, one of the end game point objectives one of my players had gave them a flat 12 points. All the other end game objectives give a max of 6 points. That player basically won before the game even started. That’s either a horrible decision or an egregious oversight. I could go on. 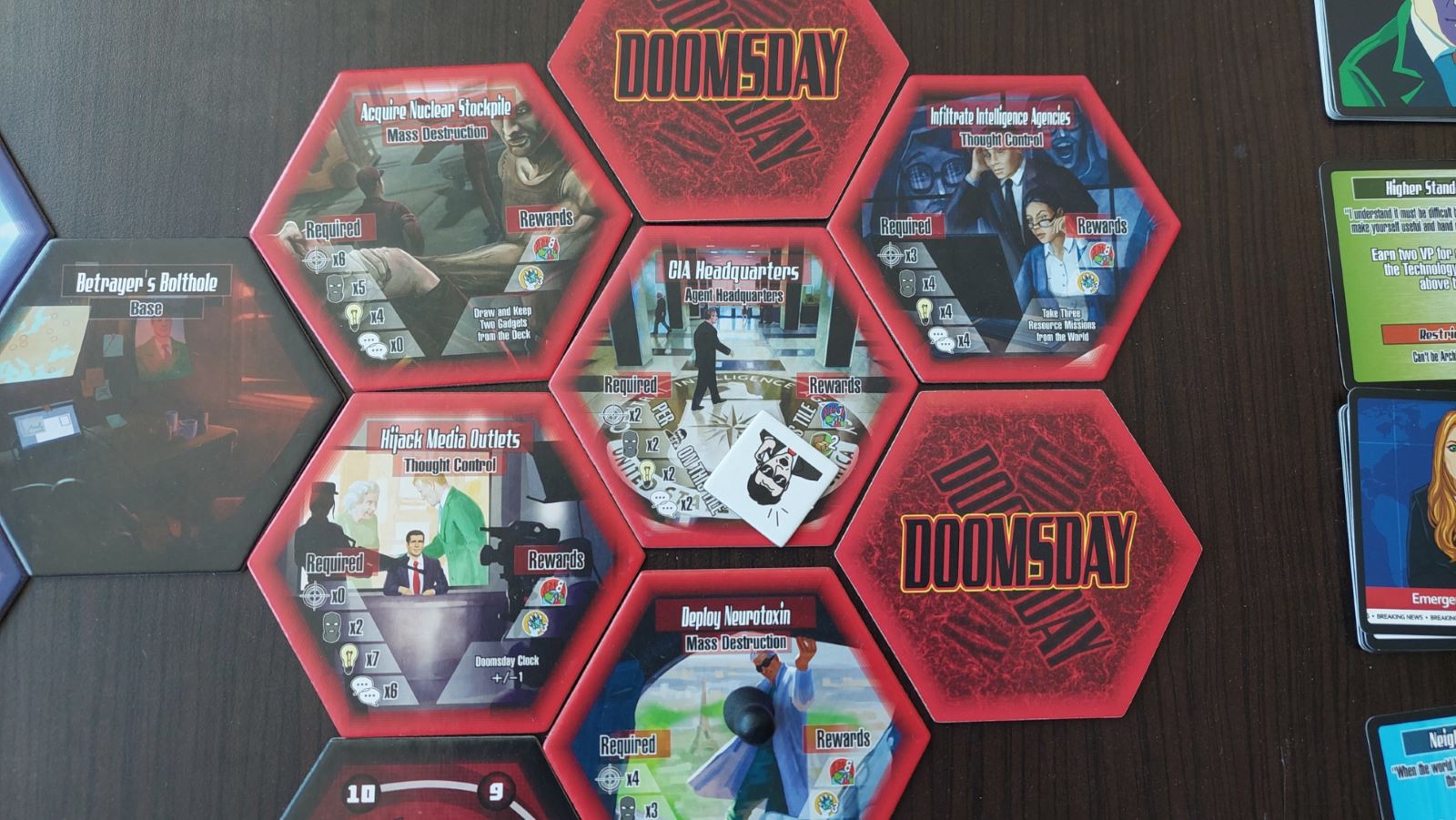 Even if an argument could be made that Tomorrow Dies Today plays like an absolute dream if every player had a complete understanding of the game, I don’t think it deserves to make that argument. After the exhausting marathon that is the first game, no one in their right mind would want to put themselves through an experience like that again. Every time a question was asked that I wasn’t sure of, I buried my nose in the rule book and if that didn’t work I checked the advanced rules and if that didn’t work I checked the BGG forums! Several of those questions were asked. Let this be a lesson for all game developers. Blind playtest. Blind playtest. Blind playtest. Giving the game to a group of people and asking them to figure out how to play it would have been an enlightening catastrophe. Either Mooney Bin Entertainment didn’t do a blind playtest, they were ok with it being a total disaster, or they had a bunch of actual evil geniuses playtest it, in which case I’m calling the CIA. For one final gripe, the insert that came in the box did not leave nearly enough room for all the components so I had to throw it out. At least the figurines are metal casts though, that’s nice.

Tomorrow Dies Today posits an incredible concept before burying it under an avalanche of barely coherent mechanics and inflating the play time to up to 6 hours. Good luck untangling this one, I don’t recommend you try. However, if this sounds like the coolest thing to you and your friends, and you don't mind a rough learning period, it could be worth it.

Ellis is a fledgling table top hobbyist with a passion for finding and sharing novel experiences. Always on the hunt for a good laugh or competition, Ellis hopes to draw deserved attention towards any conduit of positive memories, small enough to fit on a table.
Related Articles: Tabletop, Tomorrow Dies Today
Share
Tweet
Share
Submit