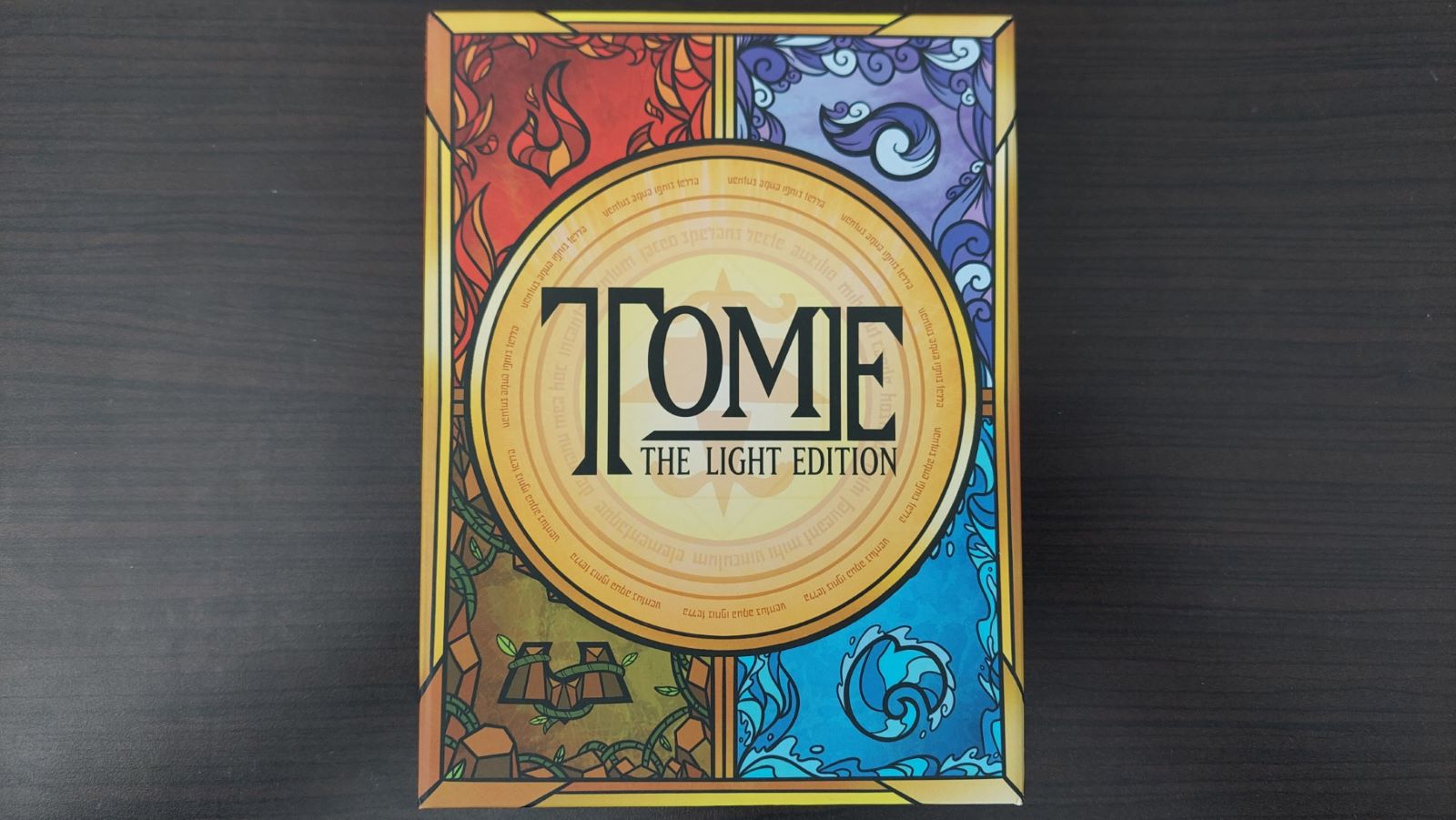 Mmmmmmm! What’s that smell? There! By the oven! A large tray of freshly baked brownies lulls me over, still warm and gooey. But, what’s this? Dozens of cactus spines perforate the surface. They’ll have to be removed before I can claim my fudgy prize. Several painful pokes later I’ve plucked enough to cut myself a delicious square. As my brownie lifts up my saliva drips down. But, what the heck! It’s like, half a centimeter thick! All that effort for a couple small bites. Dissatisfied, I return to whatever I was doing before.

Tome: The Light Edition is a unique, and surprisingly weighty, trick taking game in an itty bitty box. Two or four players go head to head throughout a series of tricks, where the winning team scores one or two points each trick. Or, two to four players fight for their lives in an elimination survival match where the loser of each trick loses one of two life points. 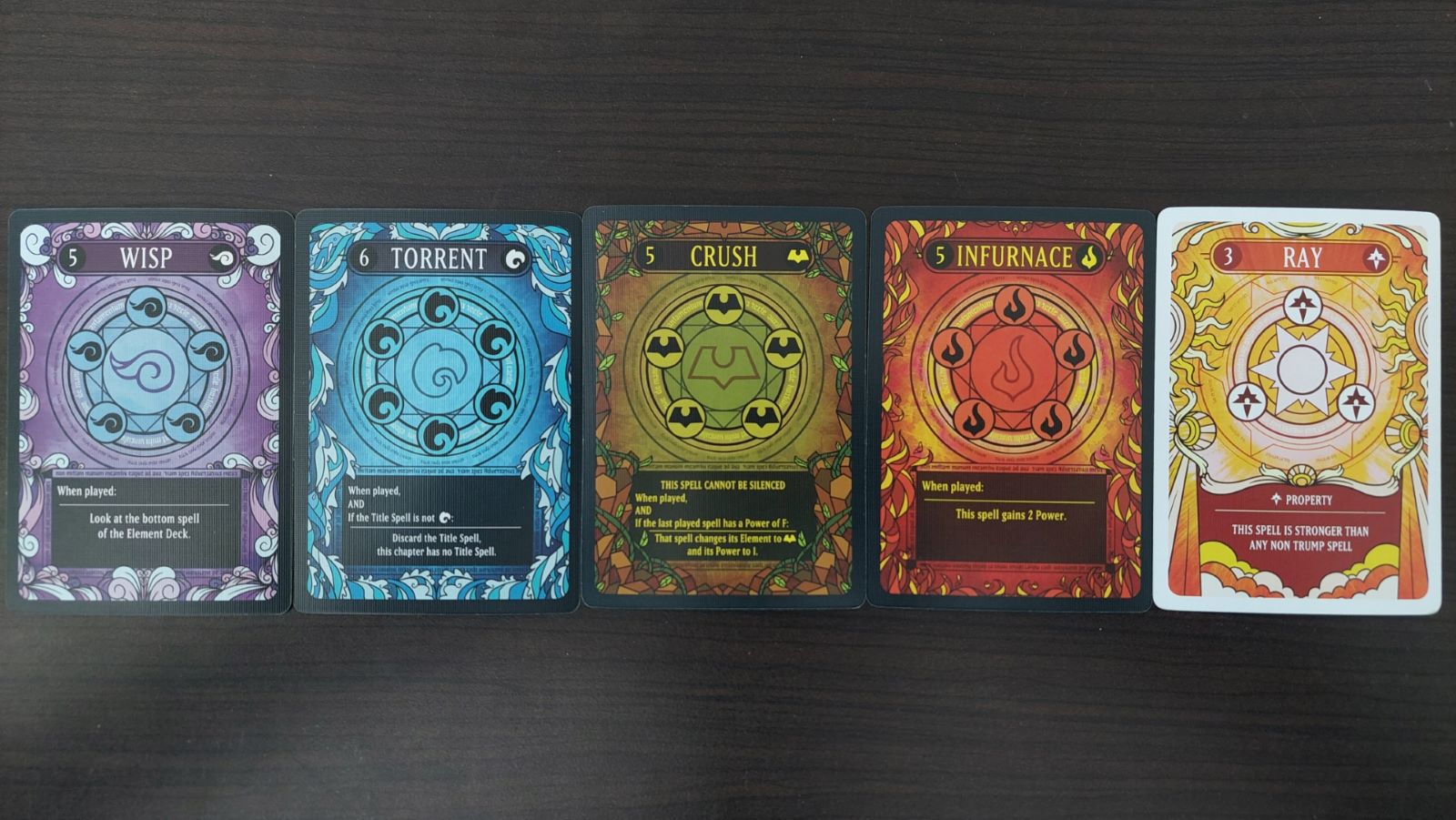 Tome is one of those games where every rule has an exception and every exception also has an exception, which is one of the reasons why learning this game can be incredibly frustrating. As for the other reasons, I’ll elaborate further later. For now, in an attempt to describe what makes Tome so unique, I’ll try to describe the game in as much detail as I can. Specifically, I’ll explain the team vs team mode with four players, in which teammates sit across from each other. An important side note, players are not allowed to discuss the contents of their hand.

A game of Tome consists of a deck of 30 spells. A deck must contain four basic elements and one special element, each having six spells for a total of 30. Each element’s six spells have powers of 2-6 and flux, which is essentially infinity. Tome: The Light Edition Comes with four basic elements of fire, water, earth, and wind, and a special element of light. Each of the 24 basic spells have a unique effect, while all 6 spells of a special element have an identical property rather than an effect. 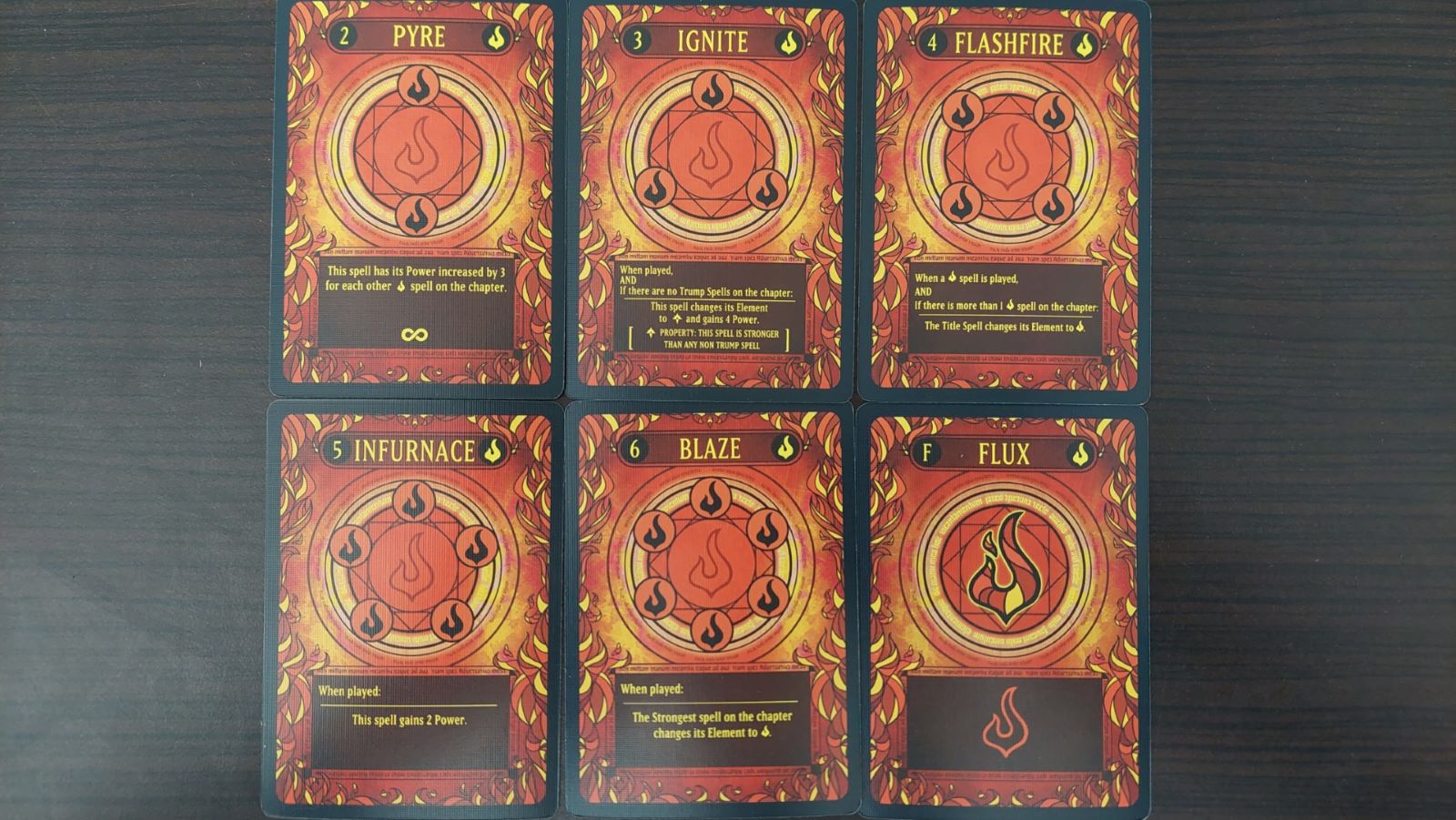 To set up, deal 6 cards to each player and set the remaining six cards nearby. This is called the “Element Deck.” Flip over the top card to reveal the “Title Spell” for the round or “Chapter.” The Title Spell determines the “Trump Spell” for that chapter. For example, if the title spell is fire, the winning spell at the end of the trick will be the highest fire spell played. If no fire spells were played then the highest value spell of any element wins. 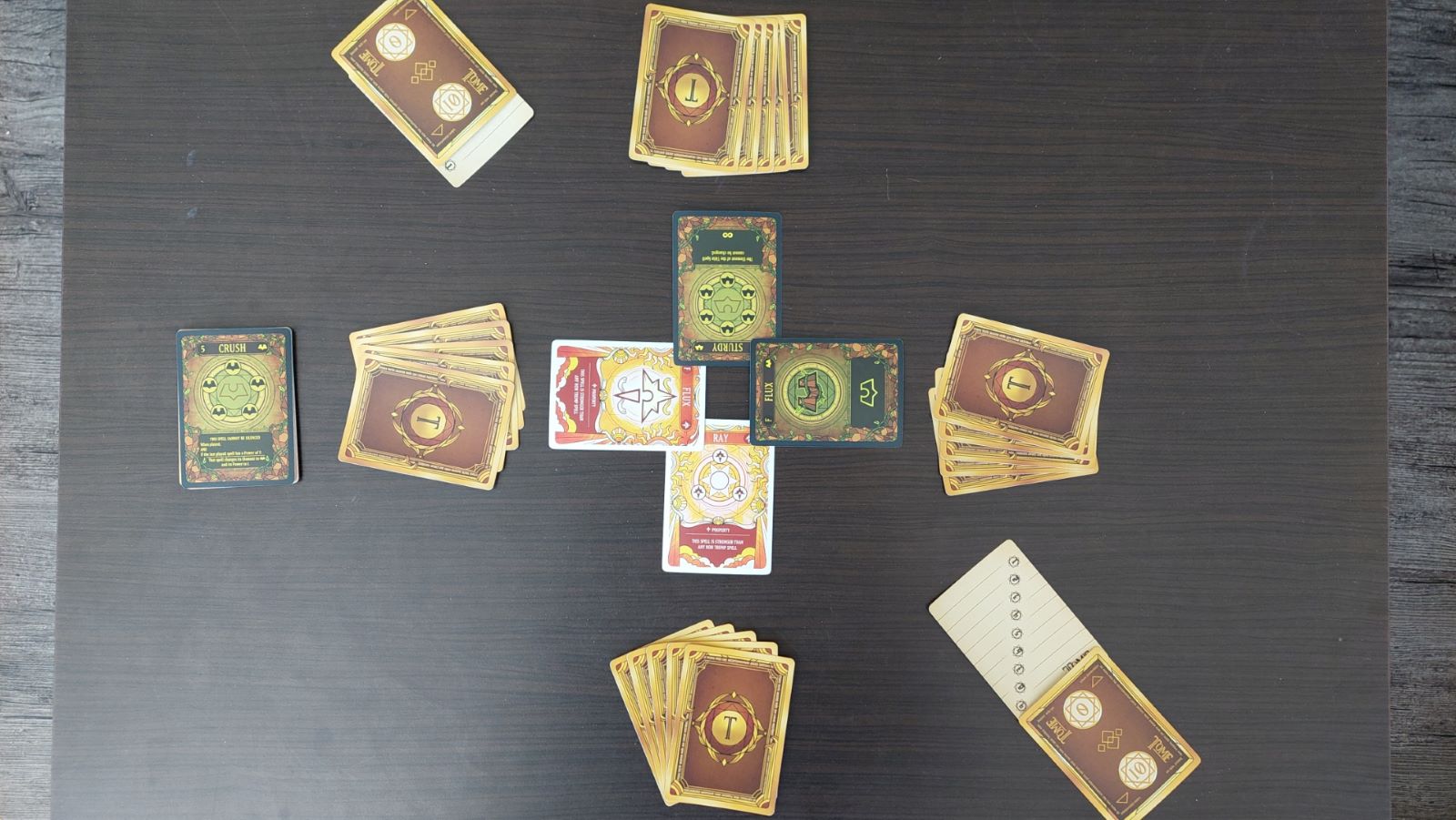 Once the Title Spell is revealed and the Trump Spell determined, play begins with the dealer who plays a single card to start the trick and resolves the card’s effect. Here comes the most confusing mechanic of Tome. Unlike most trick taking games, players are not required to play matching suit, or elements in this case. Instead, Tome uses its “Chain” mechanic. The fist basic spell, a spell with a basic element, played each trick starts a Chain. If the spell played by the next player is an element matching the chain, the spell’s effect is resolved and the chain remains unbroken before passing to the next player. If the played spell’s element does not match the chain, the chain is broken and that spell is “Silenced,” meaning its effect is not resolved. The spell does maintain its element and power, however. Special elements do not start or break chains.

Because there can only be one chain per trick, each spell played after the chain is broken will not start or break a chain and its effect will be resolved. The only time a spell’s effect is not resolved is when that spell is silenced due to breaking a chain. Starting a chain is advantageous because it significantly limits the options of the next player, but if the next player, your opponent, can pass the chain to your teammate, they’ll have a harder time as well. A fire spell will start a fire chain, effectively making all of your opponents non-fire spells useless. 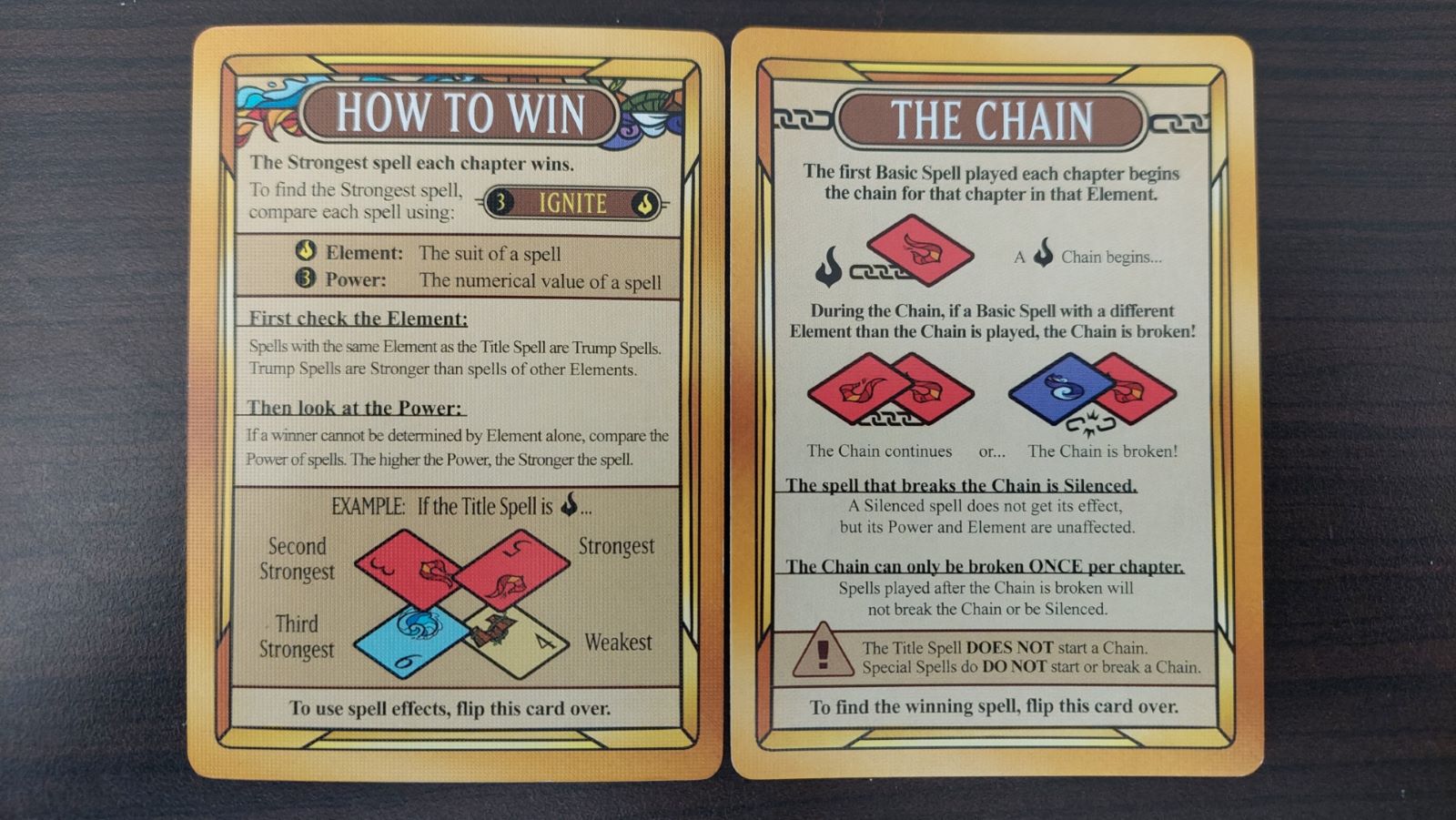 After each player has played a card onto the trick, the team with the winning spell wins a point, or two if that was the sixth and final trick of the chapter. The player who won the last trick starts the next one, and tricks continue until the element deck runs out, which signals the end of the chapter. When a chapter ends, all the cards are shuffled and dealt again. The game ends when a team reaches 15 points with a two point lead.

Now, back to why Tome can be such a frustrating game to learn. Firstly, Tome lules newbies into a false sense of security. The box is smaller than your average book, all you do on your turn is play a single card, and you only have a small hand of six cards to choose from. Easy right? Not really.

When new players are dealt their first starting hand they immediately see and start digesting 4-6 unique spell effects. Usually, they will hyperfixate on trying to understand these effects, and forget about, or just not quite understand, the chain mechanic. When this happens, and it’s happened every time, the newbie plays a card and attempts to resolve its effect before getting interrupted by the table because they forgot about the chain and played a card which broke the chain therefore that card is silenced therefore its effect is not resolved. Then, that player decides they don’t actually want to play that card and now must pick something else to play. Later, the newbie plays a “Flux” spell thinking it wins because it’s the highest power, but forgets that the Trump Spell for that chapter is a different element meaning their flux spell actually doesn’t win. Again, that player decides they don’t want to play that card and plays something else. Also, because there is no way of tracking the effects of some spells, such as turning the Title Spell to a different element, important details like that can be missed, which means more mistakes and more revealed spells.

After the fifth or sixth time a newbie mistakenly plays a card, revealing useful secret information in the process, sometimes multiple times a turn, before being told “no that doesn’t work like how you thought it did, actually it works this way…” they become extremely grumpy. And honestly, as the teacher, it makes me grumpy too. When I play games with people, I want them to have a good time. When I play Tome with people, I wind up telling them “no sorry that doesn’t work like that” so many times they’d rather run a mile in pebble filled shoes.

The teaching and learning experience for Tome is a much taller hurdle than anyone could expect, but a hurdle is just a hurdle. What about when that hurdle is passed? Unfortunately, Tome drops the ball again. After such a steep learning experience, you would expect Tome to reward you for clever plays and savvy strategy, but tactical genius will only take you so far because luck is largely the determining factor of success. What’s the point of putting the player through a delicate and frustrating learning process if the complex mechanics serve little purpose? What’s the point in teaching someone to wield a tool they have no use for? Tome creates an appetite for deep strategy before serving an unsatiatingly light appetizer.

To finish off this review, allow me to gush about the art for a bit. Tome is one of the most gorgeous little games I’ve ever seen. The design of each element is just beautiful, the box itself looks like a small book, and the lid, which functions like a door, crisply snaps onto the side thanks to a magnet. Even if this game were horrible, which it isn’t, I would want to show it around just because it’s so pretty! I might even frame some spells and hang em’ on my wall at some point. Fabulous. 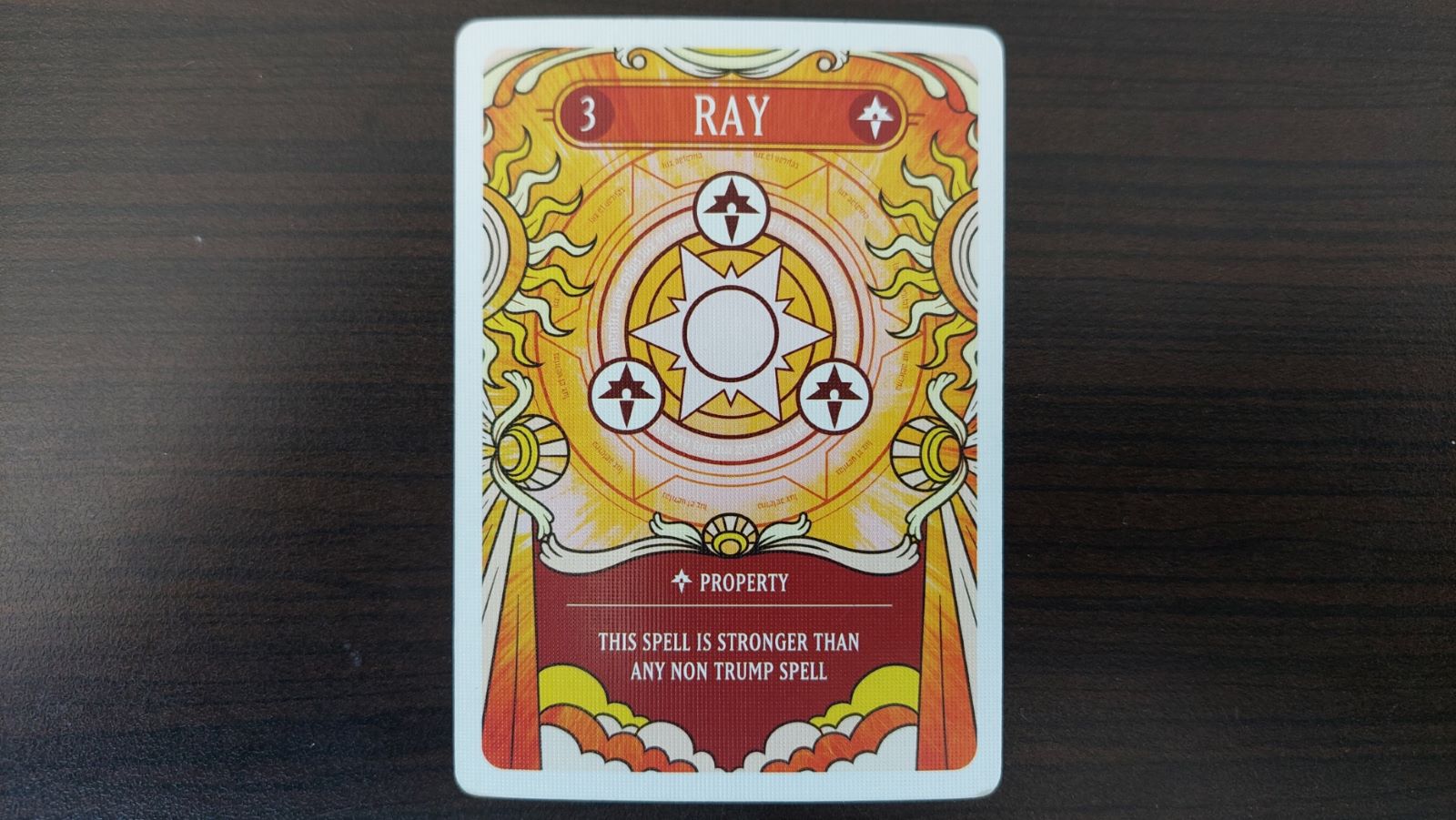 Tome’s enchanting beauty and innocent disposition betrays the pain contained within. Worse still, those who push through that pain receive little to no reward. I want to show everyone I know this gorgeous little box, but I don’t want to feel the need to apologize to them after we play it.

Ellis is a fledgling table top hobbyist with a passion for finding and sharing novel experiences. Always on the hunt for a good laugh or competition, Ellis hopes to draw deserved attention towards any conduit of positive memories, small enough to fit on a table.
Related Articles: Tabletop, Tome: The Light Edition
Share
Tweet
Share
Submit