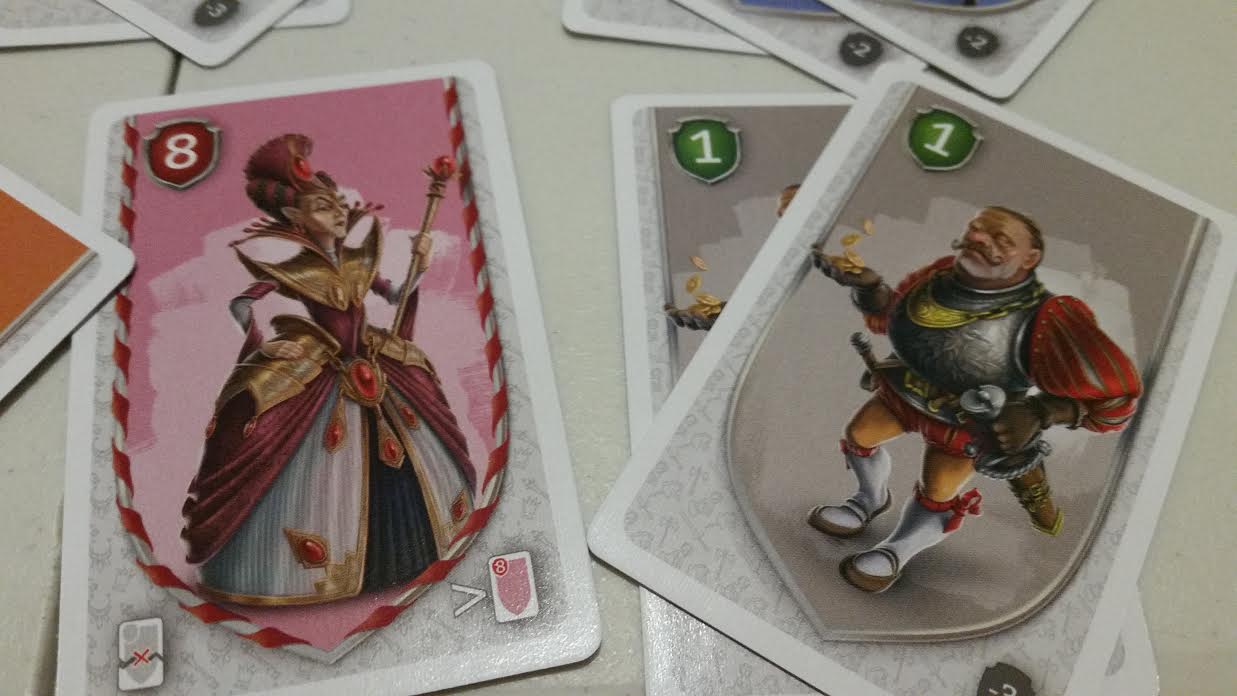 The opening paragraph of Behind the Throne’s rulebook talks of secret organizations conspiring to manipulate courtiers as they strive to gather enough power to control the throne from the shadows. You wouldn’t be to blamed to think this Ares’ title is another sweeping epic in the likes of War of the Ring rather than a simple push your luck card game. The story may be a bit extravagant, but behind Ares’ storytelling is an intriguing title nonetheless.

The deck is made up of caricatures of people associated with the royal court from jesters and generals to minstrels and alchemists all the way up to the king and queen themselves. Each is given a value from one to nine that serve as the basis for endgame scoring. The goal is to collect up to five distinct sets of these cards. The first card in each set doesn’t score, so you need stacks of at least two cards to score the value of subsequent cards.

You begin with a blank canvas and need to build your pool by drawing cards from the deck. You may draw up to five cards, one at a time, and take them to begin constructing your sets. The caveat is that as you draw cards, you cannot draw a card that has a higher value than the one previously drawn. Doing so results in all the cards being tossed in the discard pile and a wasted turn for you. You can tediously draw one card and take it each time, but you’ll need to push your luck to really build your supply.

Card art is reminiscent of Alice in Wonderland, and each depicts its special ability.

In the opening round, you are at the mercy of Lady Luck in gathering your cards, but once you have some stockpiled, more options are available to you. Each card has a special ability that can manipulate the value of the last card drawn in your sequence. The general, for example, allows you to reduce the last card in the drawn row by three, while the assassin can reduce the same card by two instead. This could help you keep your card row going to the maximum of five, but these abilities are only available to the player that owns the greatest number (or is tied for) of that particular card. Owning three assassins will score you victory points at the end of the game, but her ability is unavailable to you if your opponent should have four.

Players cannot feel safe if they have a monopoly of a certain card as the game has many ways to thwart your opponent’s set progression. Should the last card in the drawn row be the same value as the previous one, either naturally or through manipulation using card abilities, you may destroy any one card on the table. That opponent mentioned earlier that had four assassins would then suddenly have three, tying you with them for the greatest number and unlocking her ability for your use.

Victory points are counted starting with the second card in a set. Here, you would score five for the judge and six for the jesters.

Additionally, you can choose to swap your drawn row for any one card. Want to give yourself another card to distance yourself from an opponent? This strategy would let you do so, and is certainly a great recourse if you are giving your opponent cards they don’t need. However, this option seems a little overpowered since a row can contain just one card, allowing you to swap one for a single card you need.

Queens and kings are the game’s most valued cards, scoring eight and nine points each respectively should you have at least two in your possession, but they are a hindrance during game play. Owning the most queens prevents you from destroying cards while owning the most kings prohibits card swapping. Their points are alluring but owning them limits your strategy during the game. This is a really great way of balancing the game to prevent an all out grab for these cards.

The game plays fairly quickly as long as players aren’t being overly cautious with their card draws. Once the game cycles through the deck, the discard pile is shuffled along with an end of game card. The game immediately ends when this card is revealed. In a game where end points determine a victor, this mechanic keeps the last turns from becoming a predictable point grab. Once the second go around begins, any turn could be the last.

It’s subtle rules like this that help make Behind the Throne more than just a trick taking game. Sure, it’s not perfect. The swapping mechanism can be abused, and a cautious player will slow the game down, but for those that like a little frenzy in the gaming will find a lot to like about this title. The theme may be superfluous, but there’s some truth to Ares’ story of a disreputable court. Shadowy, devious behavior will serve you well.

Behind the Throne is a enjoyable push your luck card game that incorporates some subtle rules that keep it from becoming predictable. It's not without its faults. The swapping rule is overpowered, and the game's cutthroat nature isn't for everyone. Still, for those that enjoy deviousness in their gaming, Behind the Throne is worth playing.

Nick grew up with games like Axis & Allies, Fortress America, Samurai Swords, and Statis Pro Football. After a life hiatus to work and start a family, he rediscovered his passion for gaming in 2012. Originally a war gamer, he now appreciate different genres and enjoys exploring great game systems.
Related Articles: Behind the Throne, Tabletop
Share
Tweet
Share
Submit