As the Internet scrambles to get their hands on the newest consoles from Microsoft and Sony, Nintendo rather quietly released something much smaller, and much more retro. The original launch of the Game & Watch during the 1980’s wasn’t met with a huge amount of fanfare, but they did sell well enough to put Nintendo on the map, especially in the Western markets, and laid the foundation for what was to come. It may be 2020, but the Game & Watch: Super Mario Bros. is back, and lighter and more colorful than ever.

I cannot emphasize how small this device is. It measures less than three inches long, shorter than a Joy-Con, and four and a half inches wide, with a very slim profile. I knew it was going to be small, but I was still surprised when I found it to be even smaller than the box it came in. It’s also very lightweight, with a bright screen and tiny speakers that pack quite the punch. The boxy design and bevel around the screen give it a truly charming retro feel. 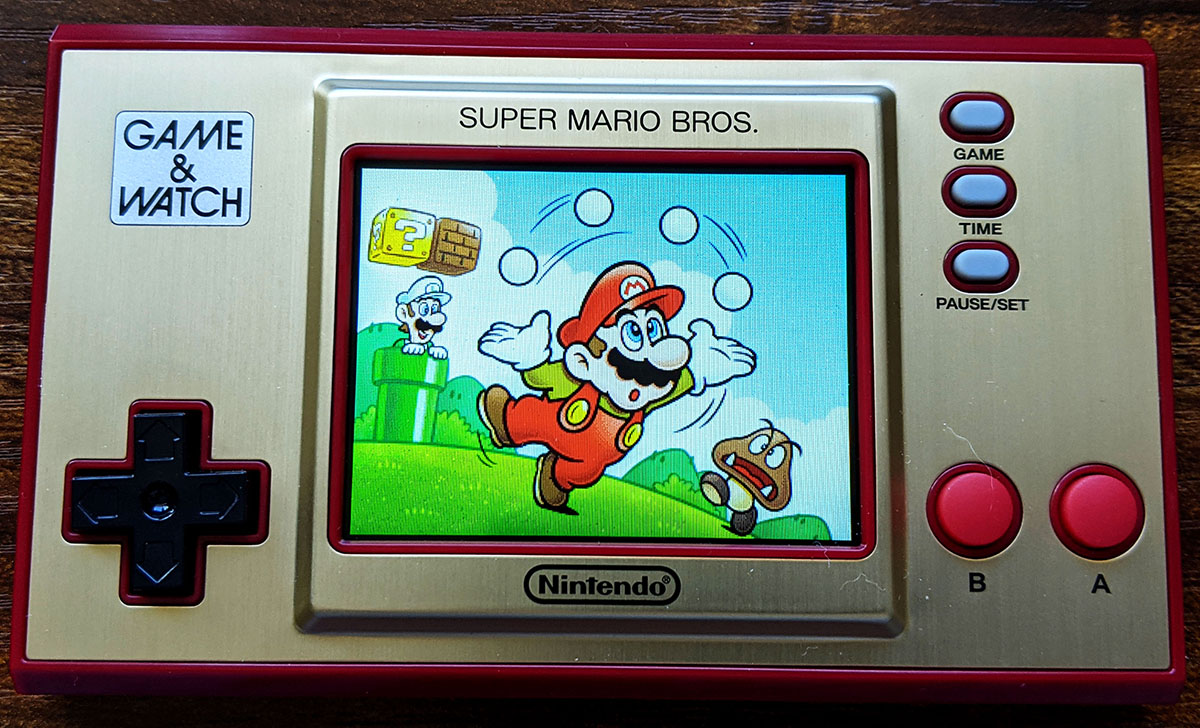 The Game & Watch: Super Mario Bros. comes loaded with three games: Super Mario Bros, Super Mario Bros 2 (known as the Lost Levels), and Ball. The screen is full color, allowing you to enjoy the NES color palette of the Super Mario Bros. games, though Ball still comes in its original black and white. Each game has two game modes; Super Mario Bros has a two player option, though don’t get too excited just yet. There’s no way to link up any extra controllers or Joy-Cons to the device, it just means that one person will do a runthrough as Mario, then pass the device off to the second player for a Luigi run after they die; rinse and repeat. Super Mario Bros 2 has a Mario and a Luigi option, which just means that you’ll play as either Mario or Luigi, while Ball has Game A and Game B. Game A starts you out with two balls which you must keep in the air, while Game B presents more of a challenge by starting you out with three.

The buttons have a soft plastic feel as well as a satisfying hint of a click when pushed. The D-pad is a harder plastic, and all are very quick and responsive. The screen is crisp and bright, making it easy to fly through familiar levels or mindlessly tap Mario’s hands back and forth to keep balls in the air. The game has 11 settings for both brightness and volume, which are both easily adjusted through the Pause/Set button on the top right of the device. 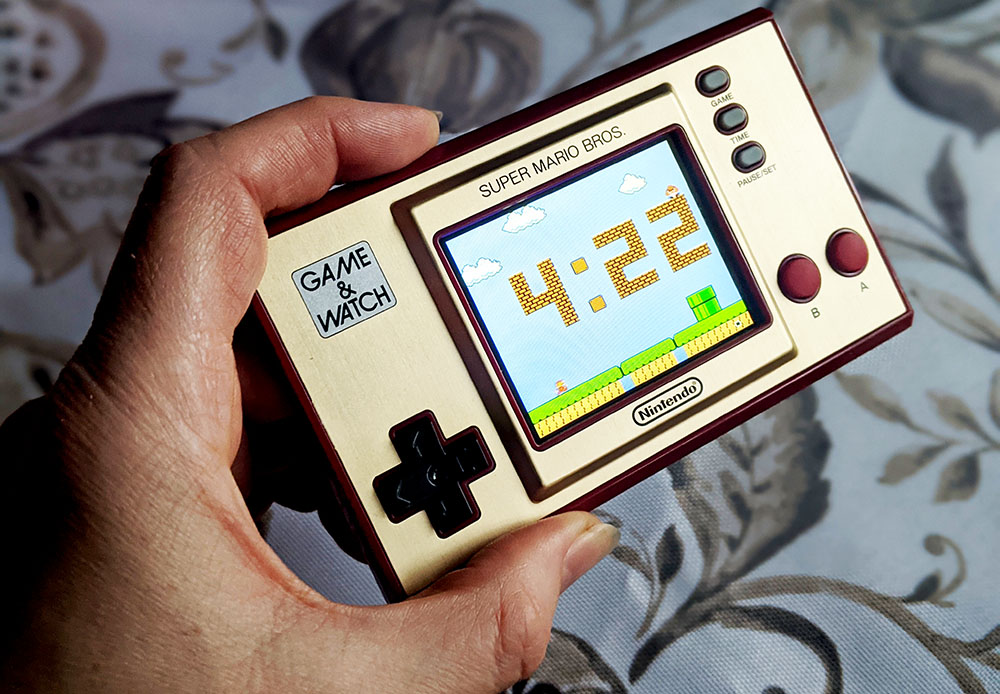 Of course, the game part is only half of the Game & Watch: Super Mario Bros., so let’s talk about the watch part of things. Pressing the Time button on the upper right side of the device will immediately switch you over to the ‘watch’ screen, where Mario will run across the screen, stomping goombas, dodging Bullet Bills, and snagging ? Blocks as they spawn. Seconds are counted off by a distinct sound and a black box which works its way around the perimeter of the screen, and the time itself is written out using bricks.

While the gameplay part of the Game & Watch is really solid, the watch part of it falls a little short by modern standards. First off, there’s no kickstand or any way for the device to stand up on its own. It also auto-sleeps if left alone for approximately a minute, and no way to disable this feature. The Game & Watch doesn’t really do much to function as a watch, given that there is not a timer, alarm, nor does it give you the ability to adjust the very short sleep timer, which really is a shame, given the advancement in technology as well as the regarchable nature of the battery. 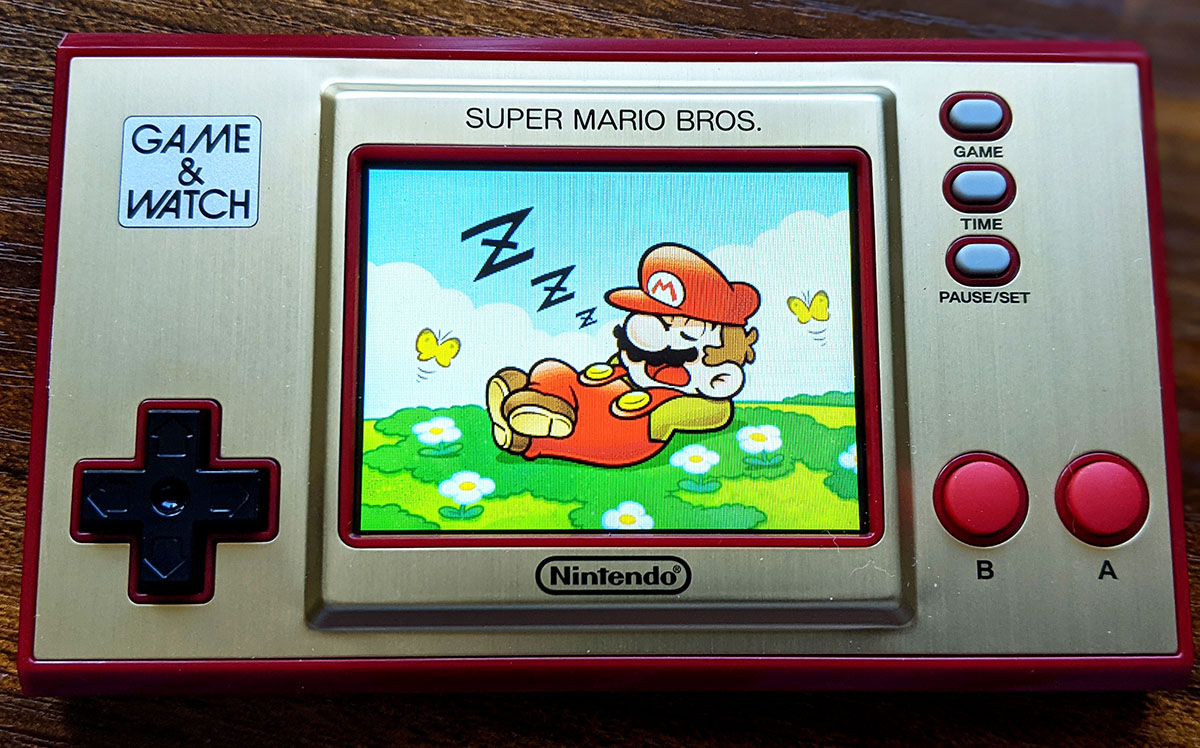 The unit itself charges via USB-C, and the charge lasts… well for a very long time. I’ve not had to charge it since initially taking it out of the package, despite having put this little thing through its paces. It can be turned on and off via a small, slightly recessed power button located on the right side of the unit, making it perfect for travel; it’s very unlikely that something is going to be able to turn this puppy on from inside your bag. One thing to note is that it lacks a headphone jack, the USB-C port cannot be used for headphones, and it lacks any kind of bluetooth connectivity, meaning that while its size makes it great for travel, you will have to share the delightful retro music and sound effects with everyone around you.

The Game & Watch: Super Mario Bros. is an entertaining miniature gaming unit. It’s classic, simple, and entertaining. While the “Watch” feature is a charming callback to the original device, it is a bit of a waste, as it is quick to sleep, lacks a kickstand, and does not have any kind of timer or alarm. That said, this tiny device comes loaded with three classic games, a bright, crisp screen, and responsive buttons; it would be an ideal travel device if it had any way to connect to headphones.