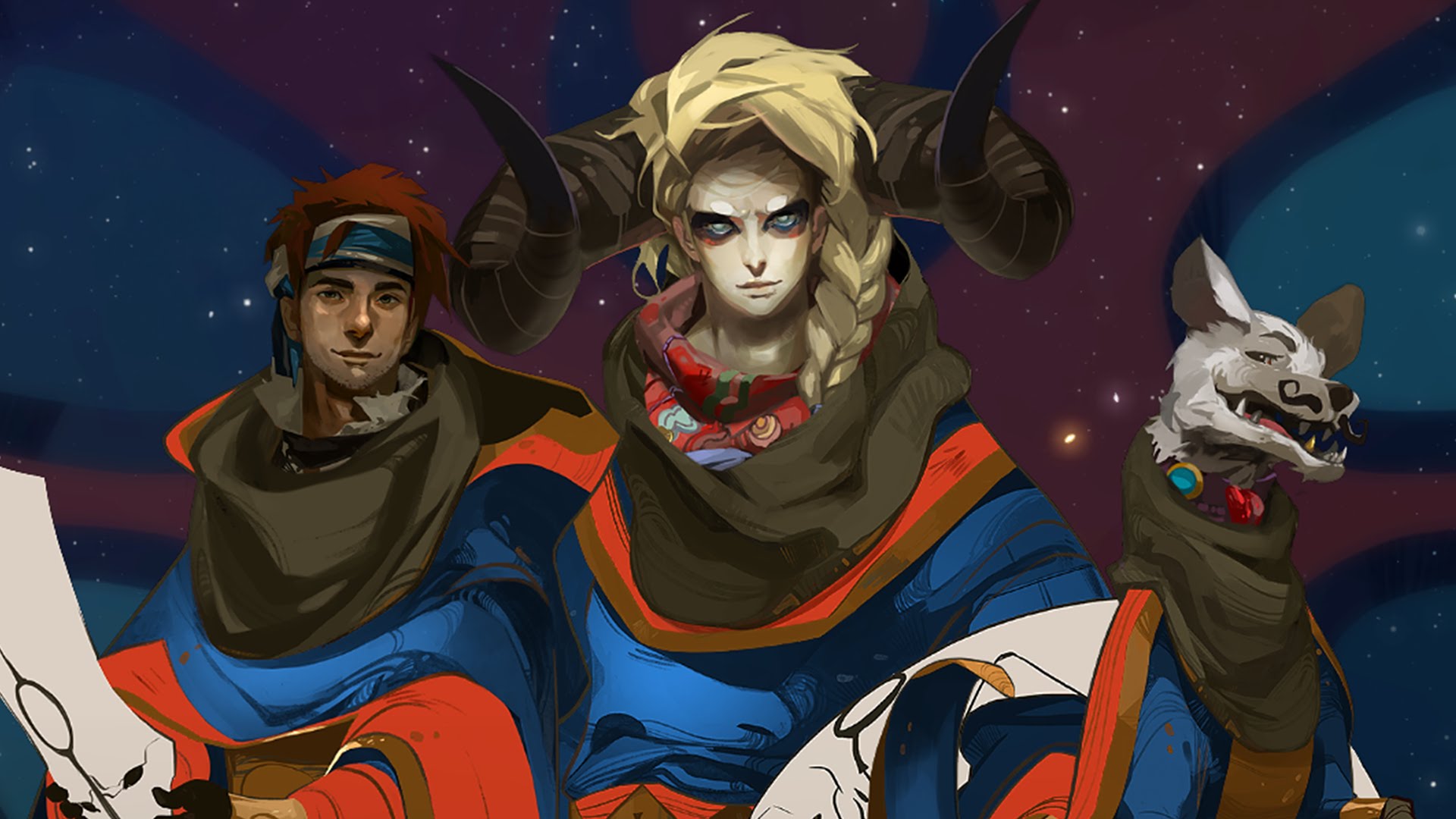 A canyon with an expanding desert comes into view. You soon realize there is a lone figure hunched over, unmoving. A few moments pass until a wagon rolls by and three masked figures come out. They begin to examine the figure and ask them questions. It turns out that you are that figure. Once they determine that you can read, they help you out and take you aboard the wagon. With that, our story begins.

The story focuses on three exiles finding the lone reader, who can help them on their journey. You meet Hedwyn the human, Jodariel the demon, and Rukey the cur. You have all been exiled to the Downside because of various crimes. The three explain to you that there are a series of challenges, called Rites, that must be completed in order to free themselves and return to the Commonwealth. As a reader, you are able to read the Book of Rites and lead them to the locations for each of the Rites. Once you reach the Rites, your friends will be the ones participating, while you are watching over them. This is where the main gameplay comes in.

The goal of each Rite is to extinguish your opponents’ pyre with the celestial orb that drops in the middle. Each side has a team of three exiles, the catch is that only one exile on each team can move at a time, so you must find a way to work around that. Using each character’s abilities, you must get the orb into the opponent’s pyre. Each pyre has 100 health, and every character does different amounts of damage based on their stats. You can either leap into the pyre with the orb or toss it into the pyre. Leaping in does damage equal to the character’s glory stat, while tossing the orb varies in damage. While it is faster to leap into the pyre, there is a downside: the longer you hold the orb, the more damage it does, maxing out at the character’s glory stat number. The next round, whoever jumped in is banished, meaning they are not present until the next round, a mechanic which adds an extra challenge, so you must be ready to adapt.

Each character’s stats will give them certain advantages and disadvantages as well. There are four main stats: glory, quickness, hope, and presence. Glory is the amount of damage they do to a pyre, quickness is how fast they move, hope is how long they stay banished when temporarily banished, and presence is how wide their auras are. For example, Jodariel has high glory, but has low quickness. On the other end of that, there’s Rukey, who is pretty fast, but doesn’t do a lot of damage. Aura is very important because it is how you eliminate enemies in your way. Everyone has their own aura blast attack which can remove enemies for a short time. They also have an aura radius surrounding them whenever they aren’t holding the orb; you lose those aura abilities while holding the orb, so be careful. Outside of the different enemies’ abilities that you face, that’s the gist of the Rites.

The Rites aren’t the only aspect of the game however. There is also plenty of traveling in the wagon, which involves choosing between multiple paths at times. Sometimes it can lead to you finding a valuable item, other times it temporarily increases stats, and sometimes it yields nothing at all, it’s a gamble that comes with choices. Once in awhile, you’ll have the option to do vocations, which can do one of three things. You either forage for items to sell, study in private, or mentor one of your friends. Selling items in the shop allows you to buy talismans and other useful items for the Rites. Studying allows you to gain minor permanent stat boosts for all members of the team, although you can’t upgrade glory until the rest are done. Mentoring allows you to give one character an extra 1000 enlightenment, which is basically their experience. As they reach new levels of enlightenment, they can choose to learn a new mastery from their skill tree. There are two paths, each with five choices, but you will only be able to acquire five of them in total; in other words, choose what fits your play style best.

That’s not all you can do with the wagon either. At almost every stop, you have the chance to talk to one of your friends. This could be just hearing what’s on their mind or even a chance to get more history about them and the world around you. As for lore, the game does a great job at filling you in. Instead of a ton of expositional dialogue, they make learning about the world more enjoyable. My favorite method they used was making certain text red. You’re able to hover over any red text and it would bring up a small window that explains who or what the word is, so all it takes is a quick look and you get more of the backstory. There’s also the option to read parts of the Book of Rites. As you progress further and do more activities, more pages become available and you can learn some extra lore. It isn’t necessary to anything in the campaign, but it’s definitely interesting to take a look at as you go along.

As the story unfolds, you will gather more party members, each with their own unique qualities. I won’t say how many because I’d rather not spoil it, but a look at the hidden trophies will reveal that number. This is where we may get into some spoiler territory, so keep that in mind from here on out. As time goes on, you eventually get close to the final Rite that will set you free, but of course it’s not that easy. Turns out only one member can leave at a time and you must go through the cycle again in order to free someone else. When it feels like the game is close to an end, it throws you back to square one. Thankfully, each sequential cycle isn’t as long, in fact, it gets shorter each time. This was a relief, because as much fun as the game is, it would be a bit irritating to have to do the full length of the Rites for each party member. While there’s a bit more to that, it’s better to find that out on your own. One cool feature they add is a planner that tracks the other teams. If you pay attention to the win/loss ratio, you can plot a course to basically set up who you’ll be facing in the final Rite each time.

Speaking of the end game, there are some more interesting mechanics that are adding in later. For example, we have the Beyonder Crystal, which is available early on, but it takes time before you can do the Scribe challenges. The Beyonder Crystal will let you know when a character is ready, then they can take on a solo Rite. If they can best the team of three and succeed, they earn a special talisman just for them. At a certain point, feats of glory will also become available. They are specific tasks you can perform in the middle of a Rite for extra money. The last added challenge is the most interesting to me: Titan Stars. The first time they show up, there are three constellations to choose from. Each one either buffs the opponents or nerfs you, but they increase the amount of enlightenment you get. After that, a new constellation is added every Rite until all 12 are shown. You can stack as many as you want or choose none of them; it’s entirely up to you. There’s a trophy for winning a Rite with all 12 active, which is doable as long as you don’t get too reckless. It was a tough challenge, but that makes it more exciting.

Now let’s get to the overall design. As stated before, sure the game can get a bit repetitive, but that doesn’t make it bad. In fact, the different enemies make it more interesting since the same strategy may not work on everyone. The same thing goes for your team. The art style of the world is simplistic yet beautiful. It never feels like there is too much going on; in fact, it feels like they put in the perfect amount of detail. The character designs are well crafted, and you can tell they put in the time to create many unique personalities and looks. As time went on, I grew to care for the members of my team. Their drives, their strengths, their weaknesses; it all comes together to draw you into the world and feel engaged.

Speaking of engaging, the soundtrack is wonderful. As you’re exploring the world, you are treated to some really calming, relaxing music. You feel as though you can take your time and truly experience the Downside. The tone changes a bit depending on the part of the world you’re in, which adds to the atmosphere. Some of the best moments with this are following upsetting news. The music gets louder and more emotional. It’s beautifully done and it truly set a tone for what was happening and what was to come.

All in all, Pyre is an amazingly made game and is definitely worth the time. It’s perfect for the occasional stroll through the campaign, and provides plenty of challenge for those who want to power through it all. It’s not without its faults, but there are more than enough good aspects to keep you coming back. Pyre’s flame doesn’t go out easily, and it’s proven as to why.

Pyre is a wonderfully made game, with simplistically beautiful graphics, and an engaging soundtrack. The gameplay can get a bit repetitive, but that doesn't stop it from being an enjoyable journey. The characters and challenges were more than enough to make up for it.

Codi loves to play video games and watch movies. He will watch almost any kind of movie just to experience them. His ideas take inspiration from the shows and movies he watches, and games he plays. He also loves a good pun.
Related Articles: Pyre
Share
Tweet
Share
Submit