The Snallygaster Situation is what happens when tabletop gaming meets Stranger Things, and thankfully it is fantastic. Michael Addison and Jonathan Gilmour have crafted a loving tribute to the 80’s, while also providing a thrilling gaming experience.

While the box correctly states that a normal game should take anywhere from 45 to 60 minutes to complete, you’ll need to factor in a good two hours or so to set up the first time as there is a veritable cornucopia of information, rules, and ideas to understand before you can tackle your first monster slaying adventure. Despite this, my friends and I had as much fun learning the ropes as we did playing the actual game.

Let’s talk first about the packaging and gaming components, as everything included is amazingly detailed and lovingly crafted. The moment you open the box, which features gorgeous artwork by Heather Vaughn, you are presented with one of the most in-depth rulebooks I’ve ever encountered. For someone used to one page sheets that seem almost like afterthoughts in most modern games, pulling out a 15 page rulebook complete with pictures and diagrams was enough to delight and, if I’m honest, scare me. If a game has that many pages of rules, how could I possibly figure it all out?

Yes, it does take a while to figure out – only because there are so many moving pieces and four separate campaigns contained within the box.

Aside from the rulebook you have four monster sheets, each with their own difficulty ranking. Each sheet determines the campaign you’ll play, your goals, the monster’s background story, and your characters’ starting points. Additionally each monster has their own cards and, depending on difficulty, may even involve using an extra gaming board that is not required for the easier campaigns.

The game board hides a surprisingly dense world, filled with tons of places for your characters to explore, monsters to attack, and a variety of obstacles for you and your friends to overcome. 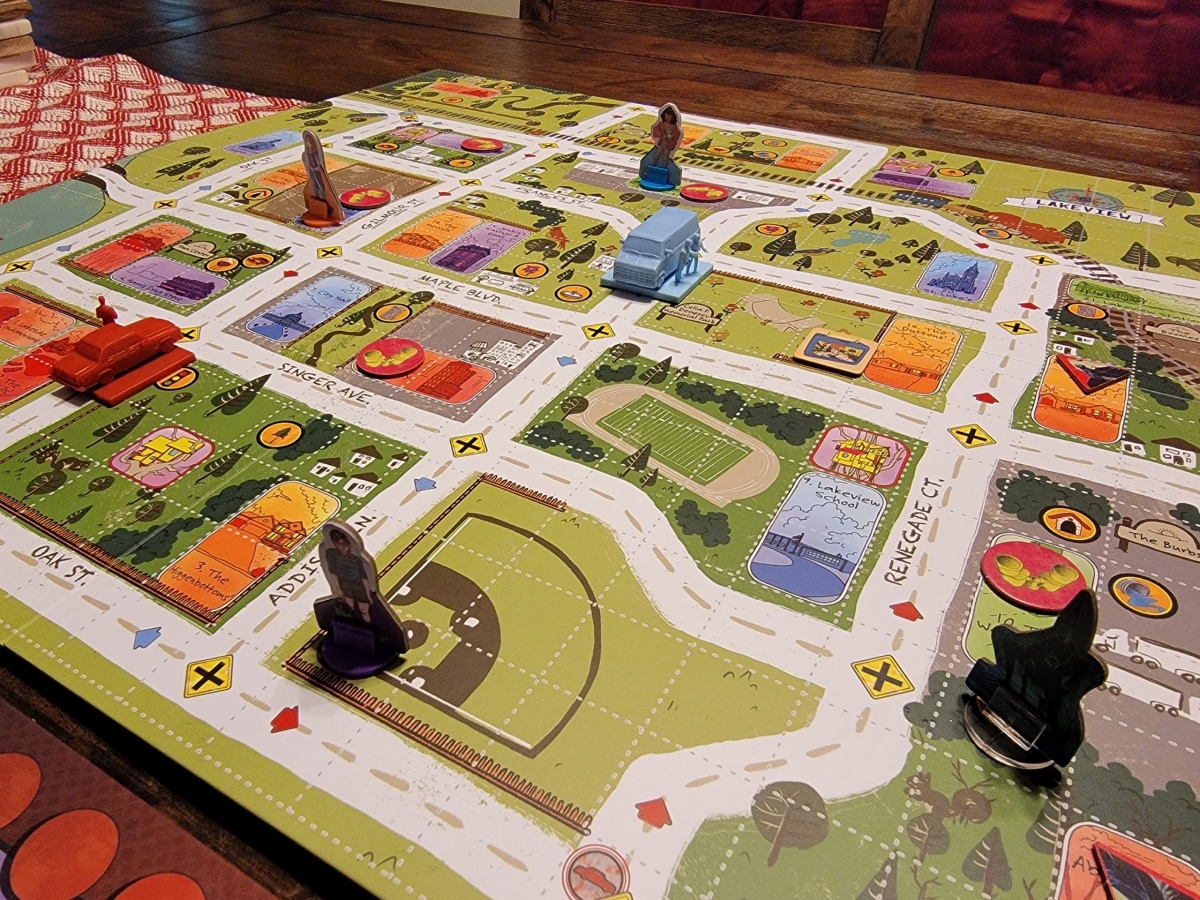 That’s the best part of The Snallygaster Situation ­– unlike many games which are competitive, in this game it is you and your friends against the monster. Every move you take inches the monster one step closer to finding you or cursing a required building – thus ending the game. This never ending back and forth between players and the monster keeps the game exciting and ensures that players move quickly to banish the monster.

Aside from the rulebook and game board there is a pin board, Doom Track and Turn Order board, a secret map screen and a secret map board, 97 tiles and tokens, 4 kid standees, 4 monster standees, 2 mini monster standees, 2 fed miniatures, 38 lost kid cards, 33 search cards, 27 item cards, 19 monster goal cards, 7 ride cards, and 4 player aid cards. Yeah, it is a bit overwhelming upon first inspection. But each card, each token, and each standee is meticulously crafted and serves the overarching game so well, I found myself constantly taken aback at the sheer amount of work that went into painstakingly crafting this game. 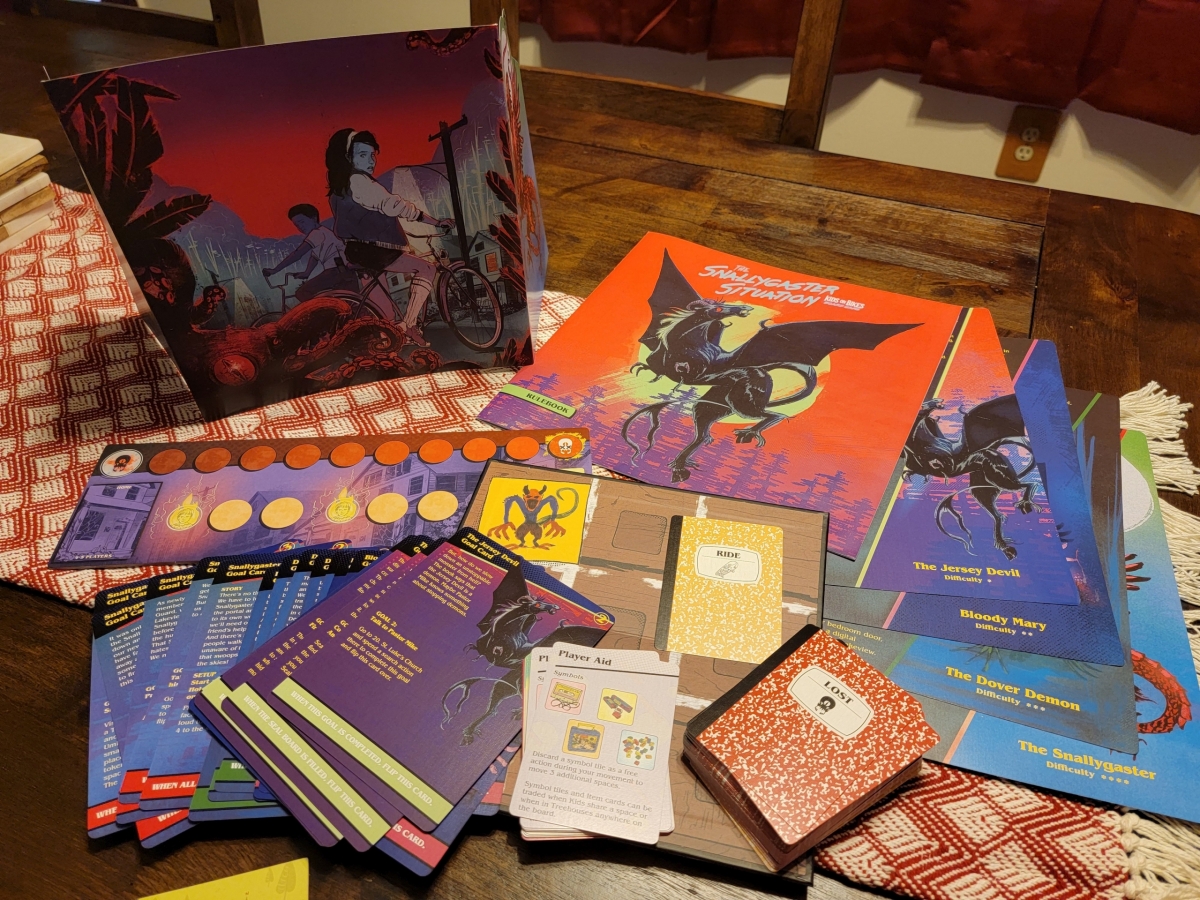 There’s quite a bit to the game, so I’ll try to explain the premise and instructions here, albeit this will be limited in details compared to the actual gameplay. In The Snallygaster Situation 2 to 5 players will work together to hunt down monsters, save their town, and rescue the Lost Kid. One player will take the reins of both the Lost Kid and the monster, while the other players will team up to find the Lost Kid’s hidden location and complete multiple goals to stop the monster, all while hiding from roaming FBI agents. Preparation for the game is mainly the same each time, except for a few game pieces and a small board which is only used for the more difficult monsters.

To set up the rest of the game you will need to lay out the game board, place the Doom Track & Turn Order board nearby, and lay down the search tokens, star tokens, wheel tokens, various card piles, and symbol tiles – all of which come into play on your hunt to rescue the Lost Kid and defeat the monster. There are also two FBI cars which are placed on the board and follow colored paths around the game board, moving once every time the Lost Kid takes a turn or when a game piece states that it must.

The Doom Track and Turn Order board tracks whose turn it is as well as the monster’s progress in annihilating the town. In this game the monster can win and end the game, so players must work together and act quickly to complete their goals and rescue the Lost Kid before the monster reaches the end of the Doom Track. Every time the monster occupies an area on the board, runs into a kid, or whenever the FBI finds a kid, the monster moves up one space on the Doom Track. 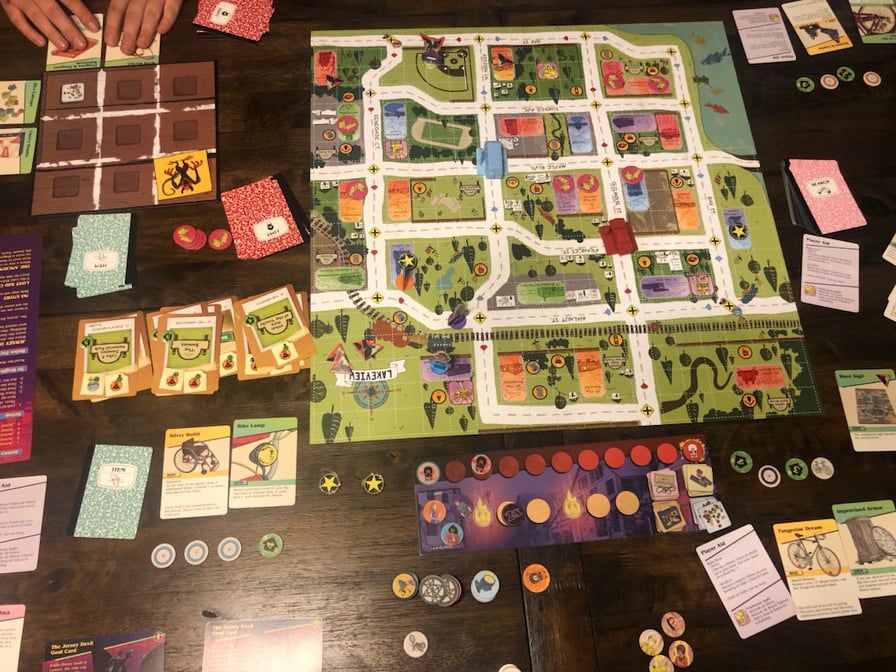 On each turn the Lost Kid will draw a Lost Kid card, place a search token on the building listed on the bottom of the card, carry out any actions that the card depicts – such as moving the monster to another area, moving the FBI cars, or moving the monster a step up on the Doom Track – and then discards the card on one of their three discard piles. The location or any item on the Lost Kid card may be a hint as to the Lost Kid’s whereabouts, so they need to remember to place that card in the proper discard pile so the other players will catch the hint.

The players will then take their turns. First, a player must choose one of the wheel tokens placed in front of them, which serves as their dice. The wheel tokens have various numbers on them, signifying how many steps a player can take. Players can choose any wheel token and move the amount of spaces it states, but they must then flip it over where it will remain out of use until all game tokens are used or a kid lands on a tree house space, both of which allow all pieces to be flipped back over and reused.  Kids must plan their moves wisely to avoid areas where the monster is lurking, where the FBI agents might drive by, and to work their way toward the buildings they are allowed to search.

Only by landing on a building with a search token can a player search that building for the Lost Kid or various items. Searching a building allows the player to draw a search card which gives a small backstory and then states various actions the player can take and what items they gain by doing so. This is how you eventually gain the items necessary to complete the goals listed on your monster card and defeat the monster. Rarely does a search card only give an item though, many times the good will come with the bad and in order to accept an item you may need to move the monster, FBI agents, or both.

Landing on a tree house allows players to flip all their wheel tokens back over, reuse any items they may have, and place one search token on a building of their choice. This is necessary to ensure that the building the Lost Kid is in has a search token on it, otherwise they cannot be rescued. The tree house also serves as a safe haven from the monster, and is where players move to once they are attacked by the monster or captured by an FBI agent.

Players continue this routine until one of two things happen: either the monster works its way up the Doom Track far enough that the game ends and the players lose, or the players complete all necessary goals, rescue the Lost Kid, and defeat the monster. The game flies by quickly, is extremely tense, and is almost guaranteed to be completely different each time it is played.

Despite the extensive set up and time necessary to prepare for your first game, my friends and I absolutely loved The Snallygaster Situation. It is a fast paced and tense experience, where every move forward you make often ends up pushing the monster one step closer to sealing your doom. My group of three worked together with the individual playing The Lost Kid to unravel their hints, correctly identify the area and building to search in order to rescue them, and then defeat the monster all while being hounded by the monster, the FBI, and a foreboding sense of doom.

There is great satisfaction that comes from cooperation in this game, with each player heading out in different directions to search new buildings, uncover needed materials for goals, and to ultimately thwart the monster’s reign of terror. No matter how well we thought we were performing, the monster never left our heels, constantly being only one wrong move away, quickly wiping out our resources by cursing entire blocks, and inching his way up the Doom Track.

Winning feels like an accomplishment, one that brings friends closer together as cooperation and planning are the only ways to survive. Even with our best laid plans, we often won by the tiniest of margins, normally with the monster only a move or two away from victory. The Snallygaster Situation is thrilling in a way tabletop games rarely are – as there is a very real possibility that despite preparation, teamwork, and planning, you will still lose. I found that to be exhilarating as that pushed my friends and I to really plan our next steps as a team, rather than rushing around the board blindly in hopes of success. Sure, the monster may win from time to time, but that only serves as a reason for you and your friends to jump back into the fray, better prepared and with a new sense of determination. The Snallygaster Situation is well worth the price of admission.

What sounds simple on paper is actually quite robust when played, as there are a ton of items, cards, stories, and areas to explore – not to mention four separate monster campaigns each with their own goals, rules, back stories, and difficulty levels. The Snallygaster Situation is surprisingly complex, with the creators often going above and beyond to provide not only a fun experience, but background stories to nearly everything being done in order to flesh out the world they have built. Top that off with beautiful artwork and you’ve got a winning combination and the perfect game for a night in.

Richard Allen is a freelance writer and contributing editor for various publications. When not writing for Gaming Trend you can find him covering theatre for Broadway World, movies and TV for Fandomize, or working on original stories. An avid retro gamer, he is overly obsessed with Dragon's Lair. Chat with him via @thricetheartist on Twitter and @richardallenwrites on Facebook and Instagram.
Related Articles: Tabletop, The Snallygaster Situation
Share
Tweet
Share
Submit