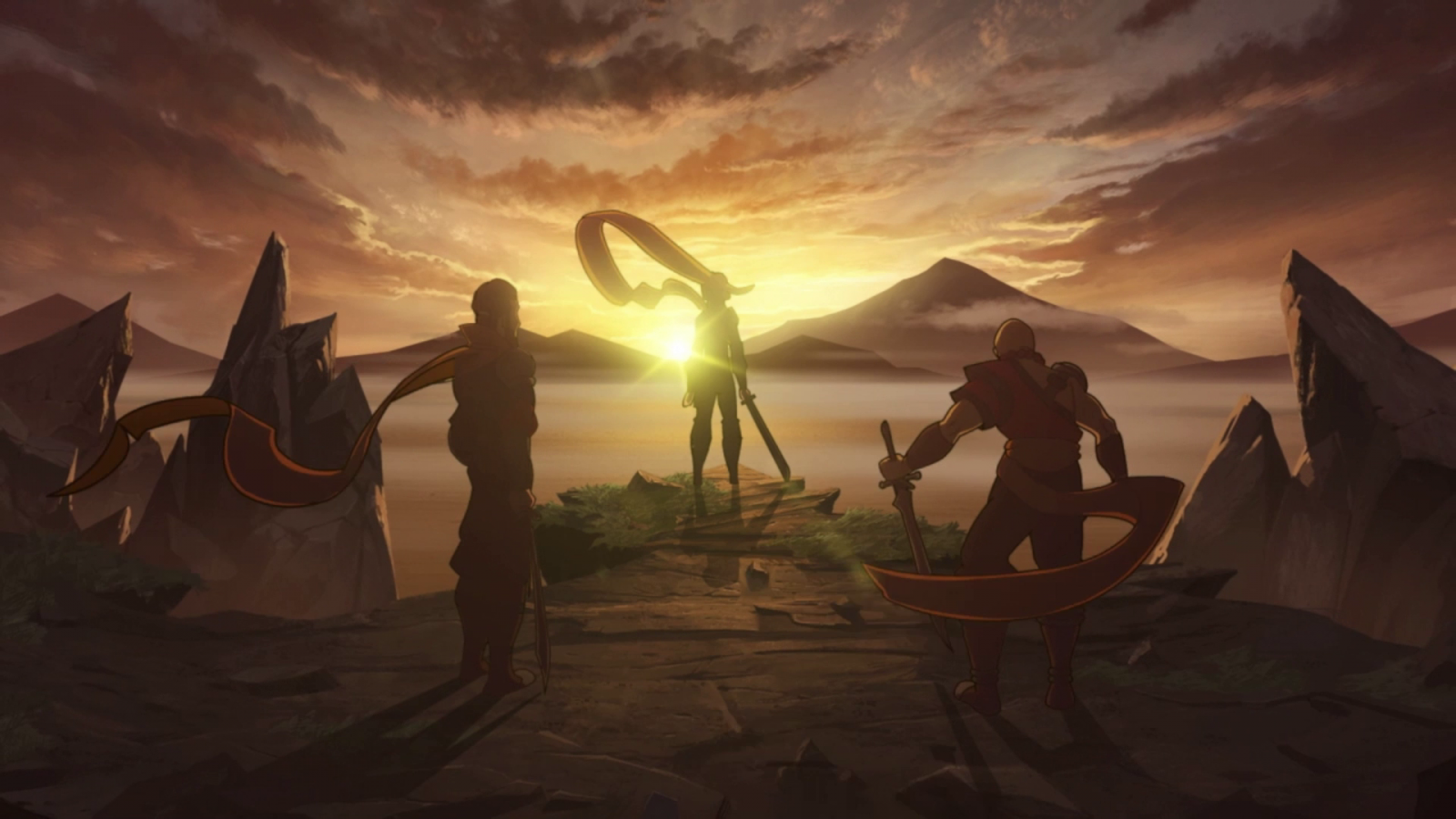 The story in Extinction is that Raveni (basically, giant ogres) want to destroy towns. The king wants you to stop them. And… That’s basically it. Hope you weren’t expecting more. The voice acting is rigid at best, and every character sounds bored, their delivery wooden. The main protagonist, Avil, has no emotion whatsoever. As towns are being destroyed and civilians are dying, he reacts as if there is a sale on broccoli at the grocery store.

As the first Raveni literally materializes out of thin air, I was interested to see the destruction as he set to demolishing a town. Boy, was it a huge disappointment. When a building is destroyed, it simply dissolves until it disappears. Every town looks the same: The buildings, trees, and surrounding landscape are recycled over and over. The bland cartoonish art style and muted color palette don’t do anything to help make the the story or recurring scenery any more appealing.

The campaign is broken up into individual missions with a select few objectives: rescue civilians, kill Raveni, and defend watch towers (which you do by killing Raveni). This is all you do. If there was a word that was beyond repetitive, that would fail to describe the tedium of Extinction’s gameplay cycle.

The combat involves running around on foot and using a sword to take down your foes. You use a whip to pull Avil quickly towards specific anchor points and is meant to make moving around the map faster and easier. Unsurprisingly, it doesn’t, and ends up hampering the experience by making movement erratic. There are only two enemy types, the human-sized Jackals and larger-than-life Raveni. The Jackal gather around portals, attacking civilians. In order to take them down, all you have to do is mash the attack button. If your goal is to save the civilians, you don’t even have to do that. Just run up to the portal, hold down the “rescue” button, and that’s it.

As far as the Raveni are concerned, you can just run around and try to hack their limbs off. If they’re wearing armor, you’ll hack that off first, then hack off their limbs. You repeat this until you’ve filled your meter for a Kill Strike, then hack off their head. There is no strategy or nuance to the combat at all, and my first Raveni kill was the same as my last.

The game makes a poor attempt at adding enemy variety by including armor types for the Raveni and making small variations to the Jackal’s attacks. It doesn’t matter, as you can mash attack on the Jackals for the same effect. And regardless of whether a Raveni has wood, steel, gold or bone armor, you still just run around it and hack at its limbs until you fill a meter to kill it.

Avil’s rune strike maneuver slows time in order to make attacking specific parts more effective. But too often, after going into rune strike mode, a Raveni jumps back or twists around to take the weak point out of reach. The camera has a limited view angle while striking, so most movements by the Raveni make it impossible to land a hit. Furthermore, once in strike mode, you can’t back out. You have to finish your dashing slash, hitting nothing, and leaving you in a compromising position. It’s rather annoying to fail your attacks just because you can’t disable your strike mode.

Fighting a Raveni is one of the most annoying gameplay experiences I’ve had, and running around these behemoths is a chore. When in a town, you have some agility with the whip dash, but one swing of his arm and a large portion of the town is reduced to nothing. You must then run around in the open ground while the Raveni stomps overhead. Get close enough to strike a leg, and he might jump back a couple hundred yards, so you just have to keep running to catch up.

In the open field, your dodge roll is insufficient to escape, and even with a successful dodge, there’s no telling whether you’ll survive. The hit detection in this game is atrocious. It feels like the programmers used a game of BINGO to determine where the hitboxes would be. Plenty of times I was well out of the way of a blow, and was crushed. While other times I would get stomped on, should have died, but would go right through the giant’s foot.

The camera is something else you’re fighting consistently. Dozens of times I found myself with a camera angle inside of the Raveni’s body, so that all I could see was the internal geometry of the hulking beast.

This game is wonkier and buggier than a termite infestation in Willy Wonka’s Chocolate Factory. A Raveni killed me with his club. I respawned, and before my character’s feet touched the ground, he clubbed me again, and again. This happened four times before I was able to squeak out enough space to avoid the incoming attack. The game hard-crashed and sent me to the PlayStation 4 home page. Your character will get caught on certain geometry, like small rocks and tree roots. Even some things you can’t see are buggy and difficult to navigate, like air. A few times, I would jump off a cliff and get warped back to the cliffside, with my character stuck in an infinite loop until I moved in the other direction.

I don’t enjoy writing about bad games. I understand making games is incredibly difficult, and I’m not claiming I know how to do it. But this game should not have been released. Someone, somewhere along the line, should have made the call to cancel this game. There is nothing to be gained from playing Extinction. Don’t bother at all.

On December 5, 1986, Josh was born into this world pink-faced and squalling. His only thoughts were, "WHAT IS GOING ON? WHO ARE ALL OF THESE PEOPLE? AND WHY THE HELL AM I NAKED?" 19 years later he bought an Xbox 360 and now plays and writes about video games. Life is funny that way.
Related Articles: Extinction
Share
Tweet
Share
Submit