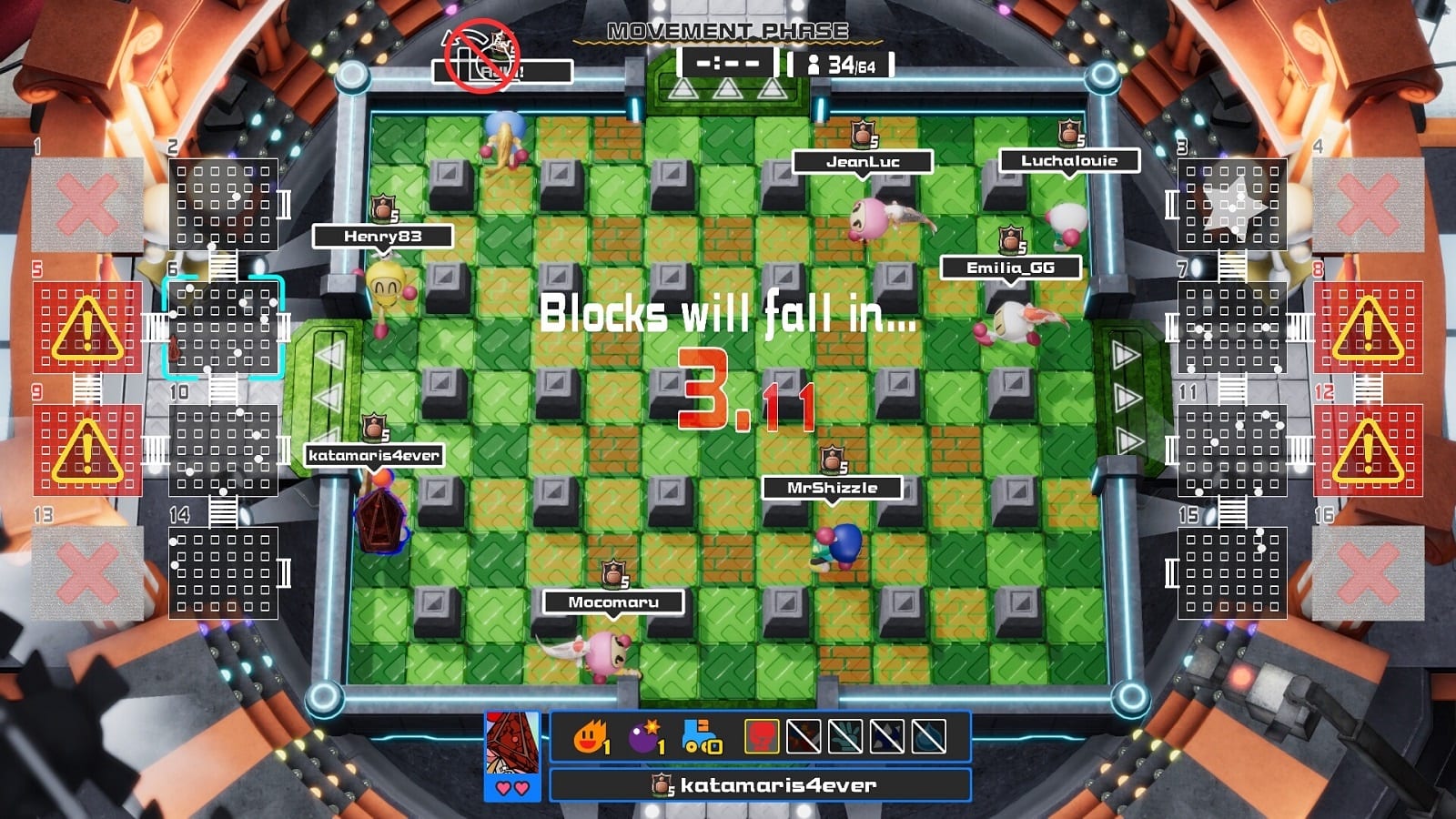 I’ve gotta be honest: I understand that the Stadia’s launch has been rocky, but I’ve enjoyed my time so far with the service. Ever since signing up for it last month, I’ve grown increasingly fond of the cool selection of Pro titles up for download, and while there haven’t been many exclusive experiences yet, I’ve been impressed with what’s on offer. That all changed with the release of Super Bomberman R Online, a Battle Royale mode of 2017’s series revival. During my time with the game, I instantly fell in love, and assert that THIS is the reason to sign up for the service. 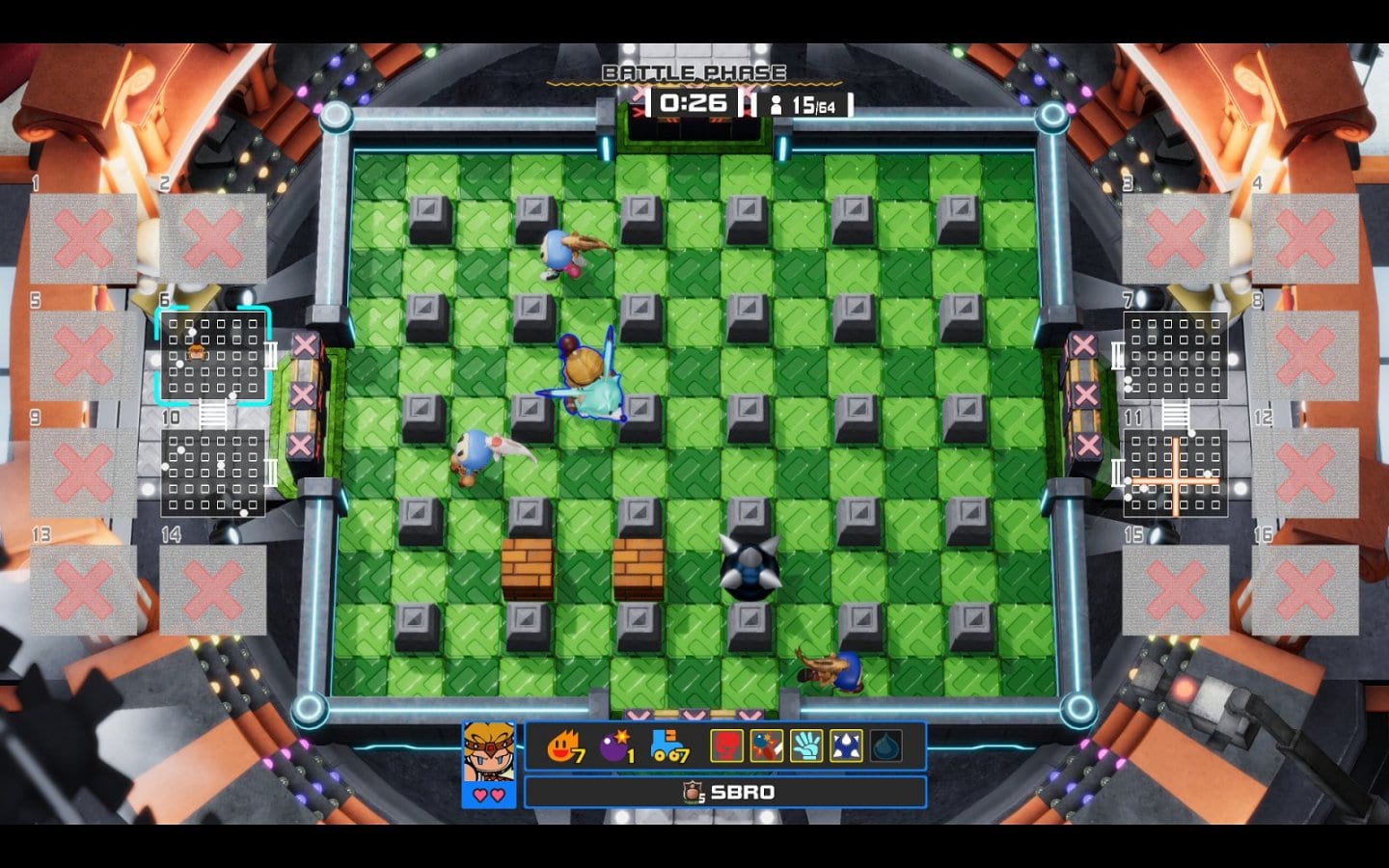 Based on Super Bomberman R’s graphical style and gameplay, Super Bomberman R Online’s Battle 64 mode takes the classic Bomberman multiplayer formula and twists it on its head. If you’ve played Bomberman before, you’ll know the classic square and bomb mechanics; place bombs onto the field, don’t get caught in the crossfire, and pick up powerups in order to gain an advantage. Other than that, it’s the same Bomberman goodness you know and love. Oh, right: you’re now up against 63 opponents who want you dead.

How does this work, exactly? Each game initially pits you and several others into one of 16 identical fields as you try to bomb each other into oblivion. You’re going to have to cleverly dodge the fire of others while also trying to make sure you don’t trap yourself inside. Each player has two hearts, so if you get hit once, you don’t have to worry about dying immediately; get hit again without picking up another heart, and you’re out. In addition to powerups, there are also hidden Louies that can help you; they also provide an extra hit so you won’t die immediately if you get bombed. (Plus, Louies are adorable). 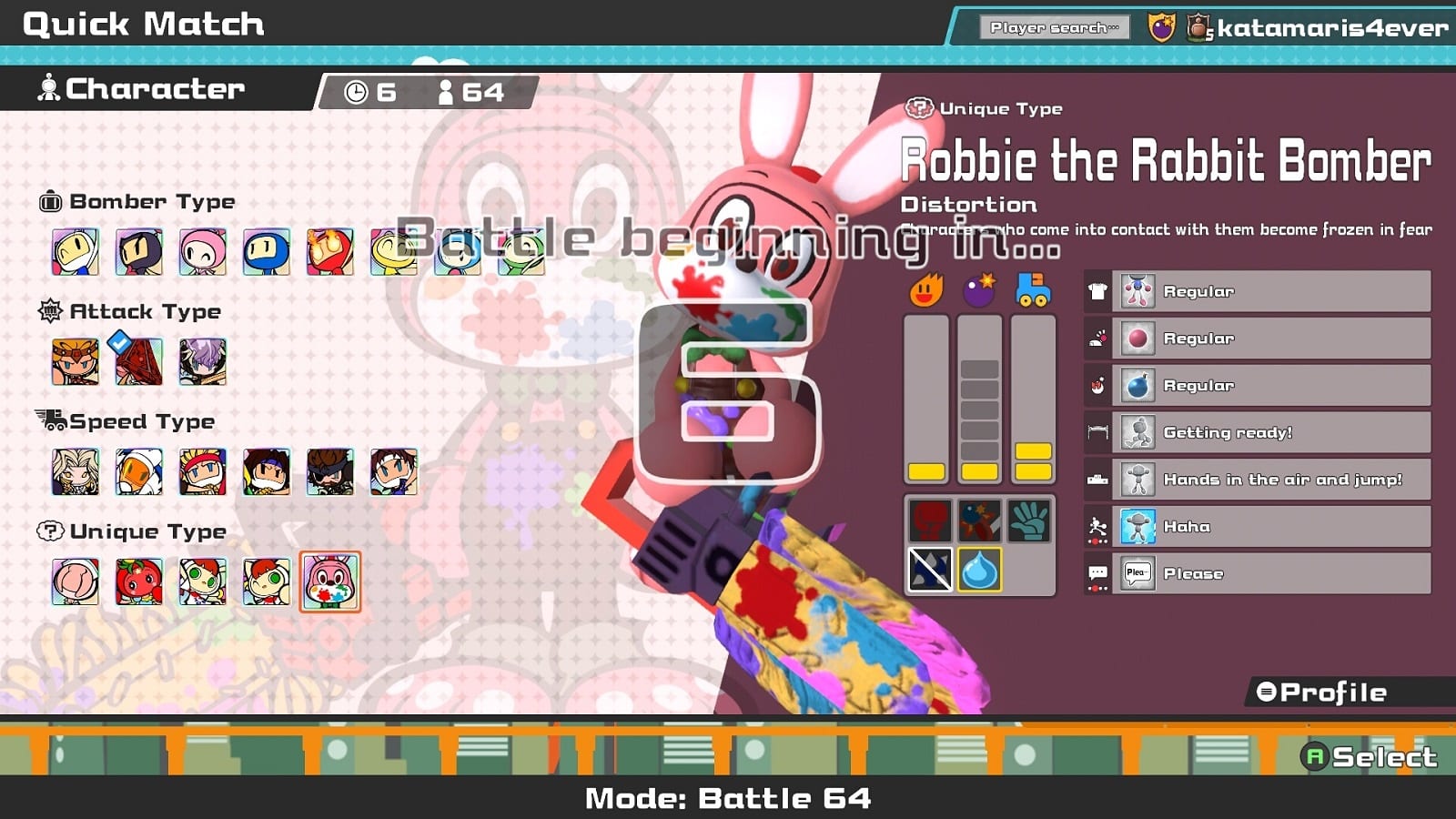 Aww, they made the killer Silent Hill rabbit cute!

After a set amount of time, the gates to your arena will open up, forcing you to pick an arena that won’t be destroyed and will also generate new opponents based on those remaining. Your bombs and abilities will be locked down until the next round begins, so you have time to get your bearings in place and continue. That said, blocks will fall after the time is up, so you can either run away from others or trap them with you; depending on which character you’re controlling, there are options for both strategies.  Staying in an inactive arena will disqualify you, so you must move quickly in order to survive. The number of arenas decreases with each round, with the final round only having one arena available. It’s a fast-paced gameplay loop that’s addictively entertaining, and while only one map is available at the time of writing, it’s super engaging and forces veterans to stay on their toes.

Battle 64 is wholly entertaining, and you can even join YouTubers’ games thanks to the Crowd Play feature offered on a few Stadia titles. While I didn’t have time to test this out, having the ability to play with fans of your channel is a great way to drive engagement (and it’ll be fun to destroy your internet idol in a match). In addition to this feature, there’s also a Bomber Pass, which is a battle pass system that will grant cosmetic rewards and emotes for playing well enough. These small rewards drive progression pretty well, and I love how this works.

Other than this, each character has specific abilities and power levels which will give them significant advantages and disadvantages. While you can pick White Bomber and have an evenly balanced spread of picking up all powerups, you could choose someone like Simon Bomber, who has different stats but also the ability to wrangle in bombs using his whip. Each character with a special ability has a cooldown, so you can’t keep spamming the same ability twice in succession.

This is an awesome idea that acts as a double-edged sword. On one hand, there are tons of different characters available from popular Konami series, with everything from Castlevania to Metal Gear Solid and even Pop’n Music represented. Every character (yes, even the default Bomber family) has their own stats, which means there’s bound to be an imbalanced roster. It sometimes feels more like a Smash Bros. title than a Battle Royale.

Case in point: My favorite character to play is Pyramid Head Bomber. His ability? You can kill anyone you touch. While there are a host of disadvantages to his playstyle (the only powerup you can pick up is the boxing glove, all his bomb stats are locked to the minimum, and he moves extremely slow during his special attack), he’s still a monster to play with in Battle 64 mode. I actually won my second match doing nothing but creeping up on unsuspecting players, activating my ability, and watching them drop like flies ala Dead by Daylight. Playing as Pyramid Head Bomber is a high-risk/high-reward character that, when controlled in the right hands, can be deadly to newcomers. 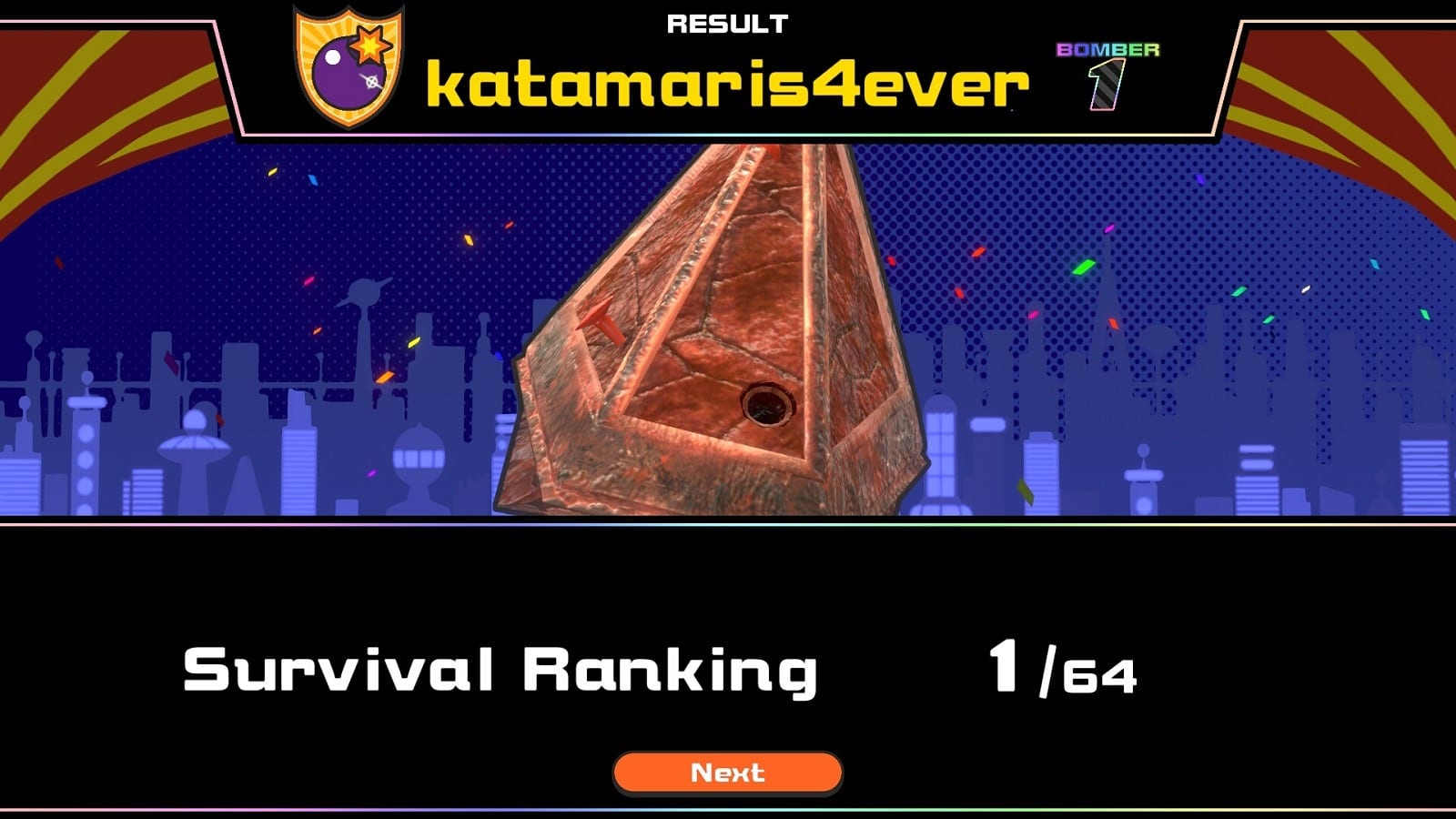 I can imagine the nerfs in the next update.

That said, it feels a little unbalanced, with the guest Konami characters hogging up more of the top spots than the regular Bomber family. This is exacerbated as the Stadia timed exclusive offers a $9.99 premium pack which includes the extra characters; while Pro members can get this free, Stadia Base members have to buy the pack in order to play (with the premium pack being a mandatory purchase after November 30 for Pro members). It’s a confusing pricing model that unfortunately will perplex fans just jumping into a Stadia Pro trial or having their membership lapsed.

If you’re not into the crazy Battle 64 mode, you can also host private matches through the invite system. They’re easily customizable and come with three modes: The Battle 64 mode, Standard mode (which supports 16 players this time around), and Grand Prix mode (which was introduced back in Super Bomberman R). This offers a traditional Bomberman multiplayer experience, but I did notice the lack of any single-player options (this being Stadia, offline options are impossible, but having an ability to play with bots would be nice). As a $10 title (or free if you’re currently on Stadia Pro), this has a ton of replay value. 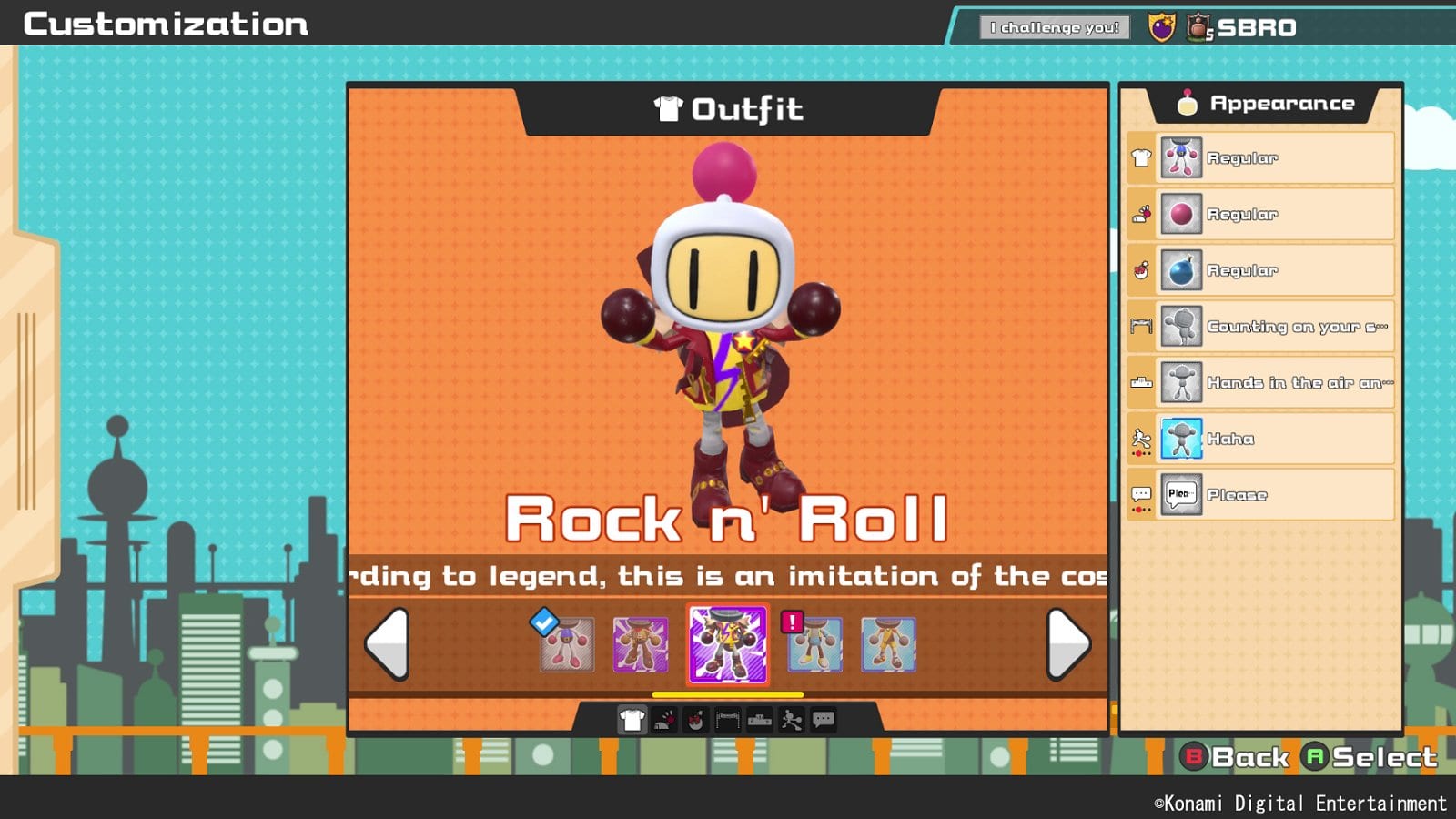 Finally, online performance works well. I’m not using bleeding edge technology like my editor-in-chief Ron, but my internet connection was fine enough to give me a crisp 1080p 60 FPS performance with minimal frame dips. Finding games was surprisingly easy, and it took less than a minute to get into a full 64-player match. I know that the smaller install base for Stadia users may prevent some from finding matches in the near future. That said, you need to play this game, and it’s a great tech demo to demonstrate the features of the platform.

Super Bomberman R Online is THE reason to get a Stadia account. While the paid premium pack can deal some unfair advantages with the initial release, the innovative mixture of classic Bomberman gameplay and a Battle Royale twist make this the best exclusive, and perhaps game available on Stadia, so far.

Elisha Deogracias is an aspiring accountant by day, freelance writer by night. Before writing for Gaming Trend, he had a small gig on the now defunct Examiner. When not being a third wheel with his best friends on dates or yearning for some closure on Pushing Daisies, he's busy catching up on shonen manga and wacky rhythm games. Mains R.O.B. in Smash. Still doesn't know if he's a kid or a squid.
Related Articles: Super Bomberman R Online
Share
Tweet
Share
Submit