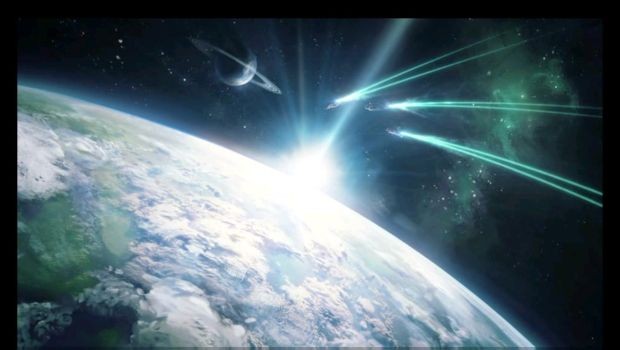 Were you excited when you heard the news of Sid Meier’s: Starships being released? I sure was. Despite the yay and nay reception the title’s pseudo prequel, Sid Meyer’s Civilization: Beyond Earth, received, I personally enjoyed the game and was happy to be getting more of it. Especially a more action oriented approach, where you could spend a few evening hours blasting your rivals into space debris before headed off to work the next morning. And it’s for iOS too? So players can put their enemies under-thumb on the go? What more could I hope for?

As it turns out, what I should have hoped for was a slightly less literal accommodation of the above expectations, in exchange for a more inspired one. While not being a bad game by any means, there is very little in Starships that won’t leave players at least slightly flustered and wanting more. And I don’t mean more in the best sense.

Now before we get too far into this, I think it important to explain that I played Starships on the PC and the PC only. Why does that matter? It matters because the longer I played this game and even when I began to write this review, I came to suspect my experience would not only have been better on an iOS device, but perhaps even the opposite. Considering the differences in processing power, interface, and other variables, comparing what is ultimately a port of a mobile game to its much more elaborate rivals of the same genre, doesn’t really seem fair. But at the same time, enhancing or adjusting a release to optimally suit the platform its being played on is far from untapped waters. These days, it’s just a part of the business. This is a PC review, taken from the perspective of a title which has PC competition for your hard earned money.

Sid Meier’s: Starships has a really great premise. Jumping off from where Sid Meier’s: Beyond Earth ends (sort of) this title moves even further along mankind’s star-charted manifest destiny. After several melenia living on a new world we evacuated too after ruining Earth, our civilization discovers signals indicating that more human colonies may exist among the cosmos. Quickly realizing what we assumed were friendly invitations are actually desperate calls for aid, what began as a strictly ambassadorial mission becomes one to defend and support our besieged brethren. And so, on this exciting and tensely mysterious note, Sid Meier’s Starships begins.

However, this is the point where the game almost immediately loses interest in immersing the player further. Unlike Beyond Earth, where a player a can spend anything from a minute to half an hour selecting who and what his civilization is and represents, Starships minimizes this process into a single uninspired screen. Here you can select from any of the civilization templates available in Civ: Beyond Earth, including each tribe’s immortalized leaders and one of its three evolutionary apexes; Harmony, Purity, or Supremacy. Each combination of characteristics has a handful of benefits, leading to your final choices of map size, difficulty and victory conditions. Once your pallet of selections has been made, the world map blinks to life, and you are on your way.

The beginning of your journey through Starships is abrupt, nearly jarring, and even if you have the optional training wheels of the in-game tutorial clicked ‘on’, what help it gives you is an awkward afterthought. Instead of guiding you through a brief tutorial of what you’re doing and how to accomplish it, Starships tends to just point out the things you haven’t done, directs you to do them, and then leave you to figure out the intricacies involved. And when I say “figure out”, what I mean is read the SpaceOpedia, the titles in-game codex.

Now Starships isn’t the first Sid Meier’s game that demands you to crack open the books if you want to improve your method of play. But it does break new ground in how on-the-nose it embarks with that approach. After traveling to your first planet, you’re full-on in the game, despite whatever happens or starting options you’ve selected. Your fleet, and how you’ve constructed it, is very much your only avatar in this new global community, and its survival depends on how you negotiate with and utilize the various worlds you visit. This means navigating a whole series of production options, resource management, and influence manipulation that just isn’t well explained. Getting the hang of it is best done through trial and error, and while that’s traditionally the most effective approach for any form of improvement, it’s also traditionally predicated on the notion the student has a vested interest. Since Sid Meier’s Starships doesn’t do a whole lot to immerse you, this can become a problem.

In Beyond Earth, while the setting is explained briefly, it is done so in a whimsically romantic way that charms you into caring about the outcome of your choices as you attempt to build a new life for your people. In Starships, if you haven’t found a reason to care in the opening credits, shooting space-missiles at your opponents better be enough. And maybe that wouldn’t be much of an ask if the presentation wasn’t so phoned in.

While the motion art approach Starships has employed serves it extremely well at times, during others, it seems somewhat deceptive. There were many moments when I would see a slide transitioning one battle to the next, and find myself yearning to see more of the conflicts and situations as the art depicted rather than what I actually got. In an era and a genre where showcasing the drama of combat is near the bottom rung of a strategy game’s expectations, Starships has a hard time even in comparison to the title it follows. In both its gameplay and it visuals, Starships isn’t doing anything that couldn’t have been done when the polygon was still the new kid on the block. And maybe that could be entirely ignorable in exchange for pristinely smooth gameplay and consistent frame rates, but Starships wasn’t even able to deliver that.

My gameplay experience was a mesh of buggy irritations and sighs. At times I would attempt to scroll my map to get a different perspective of my battle conditions, only to have my screen jump to the very edges of the territory. The majority of the battle animations would stumble at least a couple of times no matter how many or how few objects filled the screen. In addition, since the opportunities to save or load are infrequent, it’s pretty easy to find yourself in an apocalyptic bind after a visual shudder results in a mis-click or flawed torpedo launch.

In one example, I saved just before ending a turn, a turn I tactically had to end, since my crew was exhausted and my ships were smoldering from several hard won battles. A rival faction made a move on one of my allies, taking control of one of their worlds and breaking my friendly course back to my controlled territory. This created another condition where I was immediately ejected from my current port and automatically moved back across space toward my home planet. That would have been bad enough, but as the dominoes of my opponent’s tactics continued to fall, within a few seconds they had managed to clear their victory conditions (conditions I never remembered accepting) and taken control of my planet before my fleet even arrived.

If that wasn’t enough, my loss was punctuated by a crash to desktop error, flinging me from the game completely. As a matter of fact, the error was so profound every time I loaded the game this same series of circumstances repeated without a single bit of input on my side, the CTD included.

This lead me to discover and search for other flaws. Flaws such as screen formatting issues that bugged the mouse detection of your cursor, or distort the borders of your windows and hiding various interactive options and pop-ups. (Options like your selected victory conditions.)

But, despite this game’s many blunders, it does have some redeeming elements. Most notably the titles namesake; it’s Starships.

You begin the game with two vessels, broken into a segmented series of at least 9 modules. Enhancing each section of your craft transforms them both visually and functionally. Determining how you go about doing this and tailoring it to your style of play is key to effectively enforcing your will across the cosmos, and can feel very rewarding as you find ways to accomplish greater missions with you unique combinations. Build two devastating war cruisers or a fleet of small nimble corvettes, the choice is yours, and since resources can go a long way (depending on your spending habits and difficulty setting), you can do a lot of experimentation even in a single playthrough.

Customizing and developing my fleet was my single greatest joy playing this title. Enough at times to make me forget about my other troubles with it. Beginning with a pair of modest ships and transforming them into massive battleships or carriers has a singular appeal I think many players attracted to a game like this would share.

Even this bright spot has its limitations however, since modifications do have a slightly low ceiling and a clever player can quickly max his units, transforming them into unstoppable juggernauts. But even still, the game is balanced enough where even having unsinkable ships will not guarantee you victory. There are a lot of paths to the same result, and enough exploration of these options can reward an interested player with a good amount of entertainment.

The music of Starships is reminiscent of Beyond Earth, full of dreamy chords and simple yet engaging actions beats; but nothing you will find yourself humming once you exit the game. The sound effects are a cookie cutter arrangement of spacey sounds that serve their purpose but not much else, and the majority of what little in-game dialog there is was lifted straight from Beyond Earth. This title is really all about the boats, and everything about it is there to remind you of that.

All and all, Sid Meier's Starships on the PC turns out to be a mixed bag of mostly sour elements. It’s a nice distraction and even a good bit of fun depending on how much you enjoy space combat titles, but only if you go in knowing full well that this is a port a mobile game, absent of much the charm and detail we’ve come to expect from Sid Meier titles. In concept, this game is a fantastic way to build upon the fledgling Beyond Earth legacy, but in function, this game feels like a cheaper version of another Sid Meier's Starships that was never actually made.

I've been a huge fan and critic of games and movies ever since I had a voice to speak about them. I love power and influence of great storytelling, interactive and otherwise, and now want to be more than just a consumer. My biggest strength in this regard? Almost every time, I'm fair all the time.
Related Articles: Sid Meier's Starships
Share
Tweet
Share
Submit