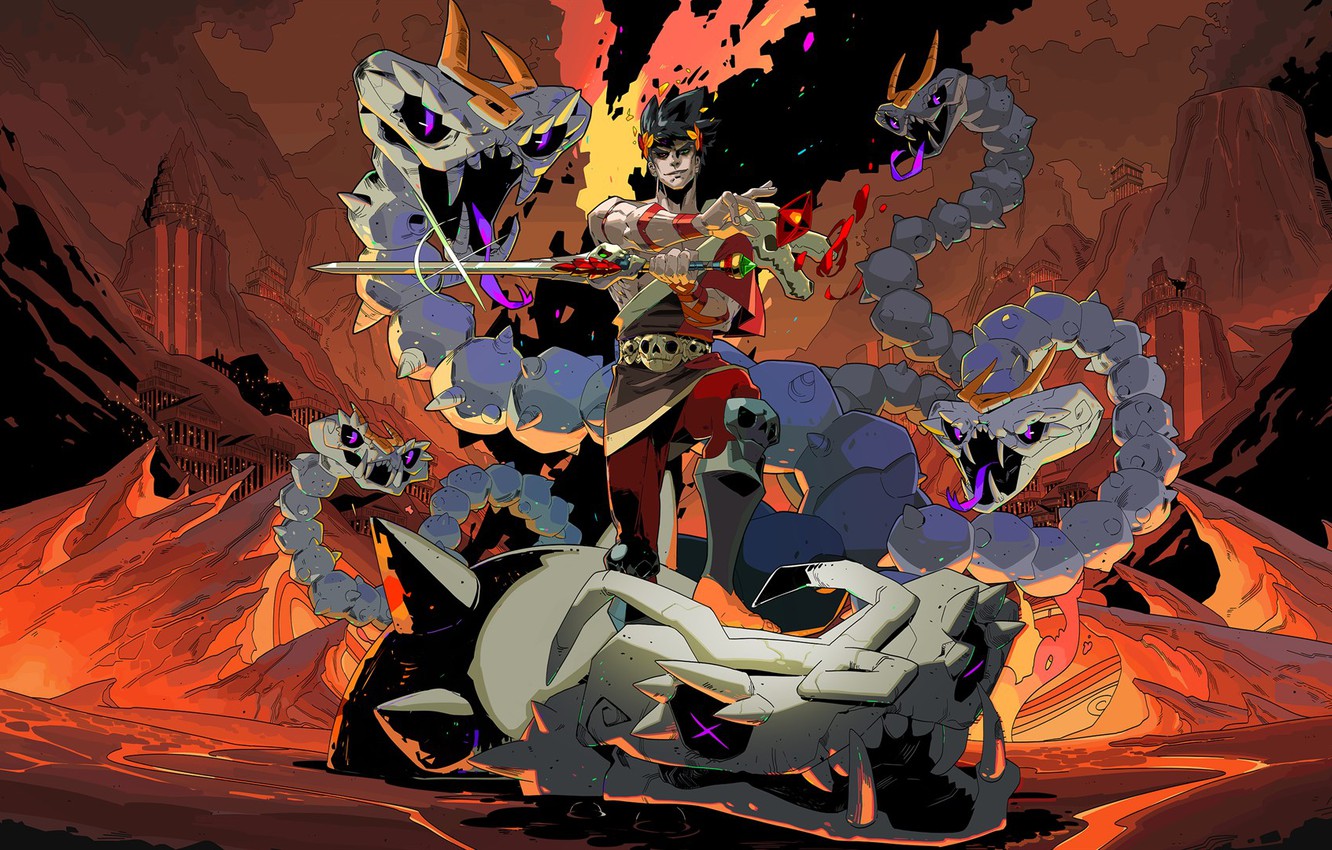 I’ve loved Greek mythology ever since I was a child. The adventures of Perseus, the story of Sisyphus, the labors of Hercules, and the tale of the Argonauts. These stories have both inspired and entertained me in many ways growing up, so it’s a shame that I’m just now experiencing the story of Zagreus, the son of Hades, and his seemingly never-ending quest to leave the underworld. Now that Hades is officially available on all consoles and I’ve finally had the chance to play it, I now understand why the game is so revered.

The first thing I noticed about Hades is the amount of effort and love put into crafting and designing the game’s world. The colorful and detailed environments astonished me and are surprisingly accurate to what you’d expect ancient Greek architecture and interior decor to look like. Even the characters are accurately designed to fit the mythology, especially the gods and demigods who are adorned in brightly colored clothes and accessories. The environments are particularly impressive, as each level is impeccably designed, from the tombs of Tartarus to the fields of Elysium. The visuals are crisp, highly detailed, and attractive, especially on a PS4 Pro, which allows the game to run at a solid 60fps. Though I did notice the frame rate drop when there’s a lot of enemies on screen. 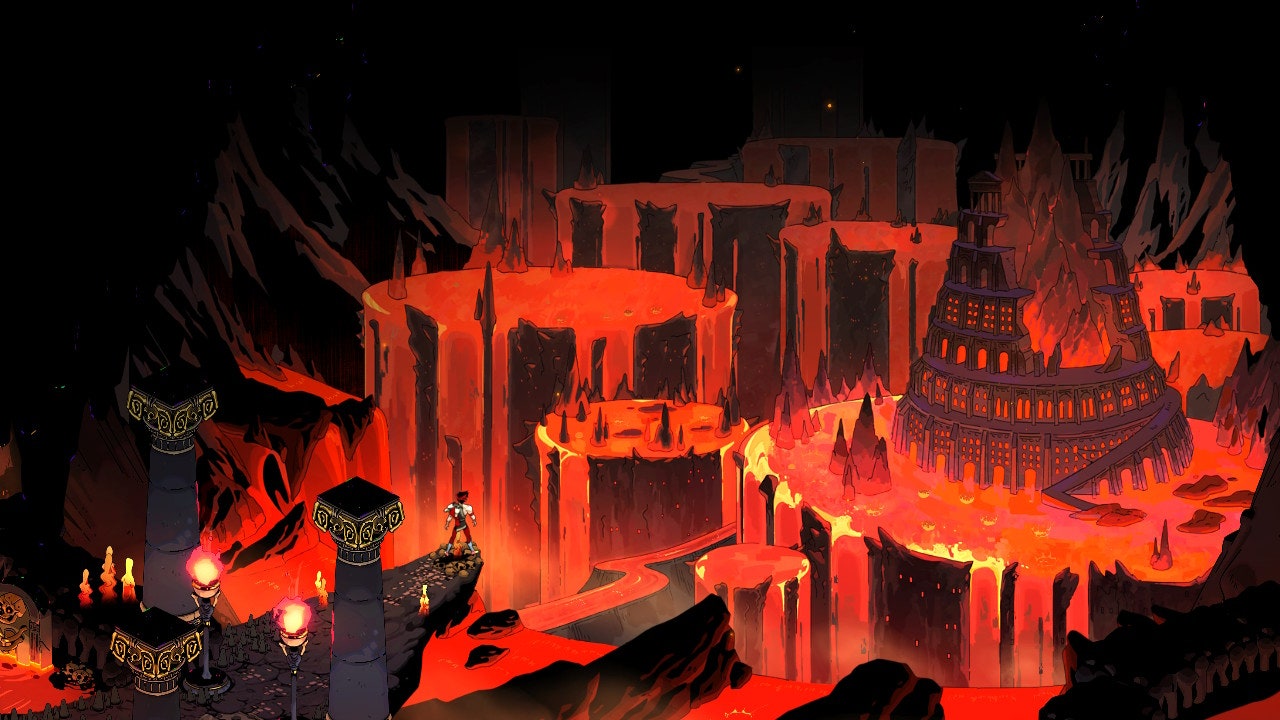 I also appreciate how the game tries to be as engaging as possible by throwing in different events between your failures or successes in climbing up from the underworld, such as meeting characters in dungeons, encountering a rare upgrade, or going back home and having scenes play out between characters. These parts of the game make it a lot more engaging as opposed to other rogue-likes that make gameplay an unforgiving slog.

Another captivating part of the game is its incredible voice acting. The cast did a spectacular job at instilling life in the characters, and all surprisingly match their roles quite well. The charismatic son of Hades has a sultry voice to match his demeanor, whereas older, greater gods like Hades, Poseidon, and Nyx have voices befitting their caliber.

What’s more, I always found talking to the game’s well-written characters a delight. Watching Zagreus banter with characters like Skelly, Megaera, and oddly enough, Charon the boatman was always fun and spending time with them while learning things like how Sisyphus is a total bro despite his unfortunate circumstance was my favorite part of my playthrough. 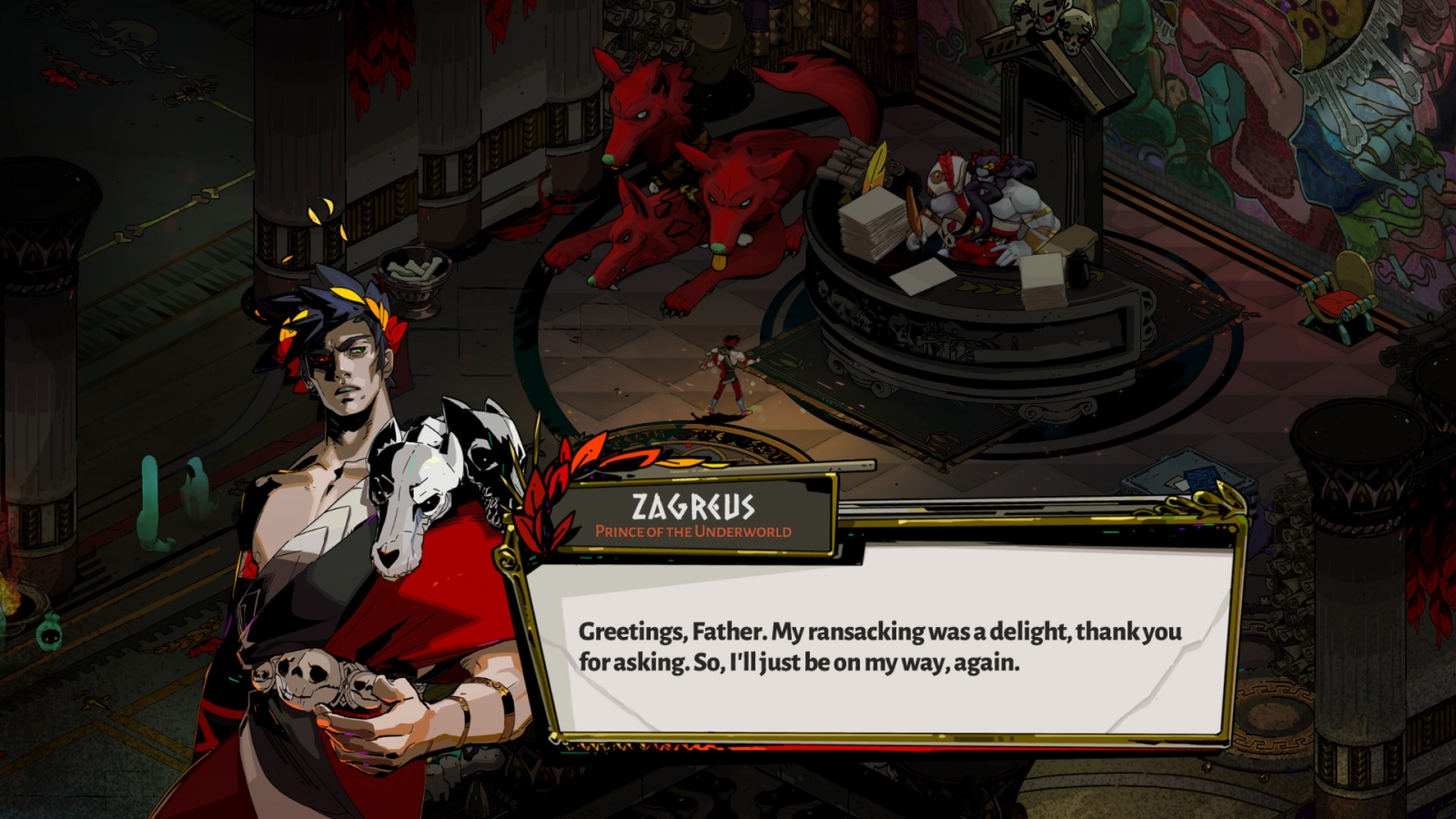 Now for the meat and potatoes of the game: the gameplay in Hades is just as good, if not better, than the rest of its elements. Gameplay in Hades is a mesh of isometric and rogue-like action. Players leave the house of Hades and fight through multiple randomized chambers through the underworld filled with various enemies and bosses, each of which provide a different sort of challenge.

Almost everything about the game is randomized, such as the items being sold between fights, boons granted to Zagreus by the Olympians, keys to unlock more weapons and skills, and more. Eventually, players will be defeated in battle and will have to do it all over again while losing all their upgrades and money. However, no matter how many times you die, there’ll always be a sense of progression as items like darkness and keys are used to attain more skills and weapons that will always be retained upon death to make the next attempt a little bit easier. 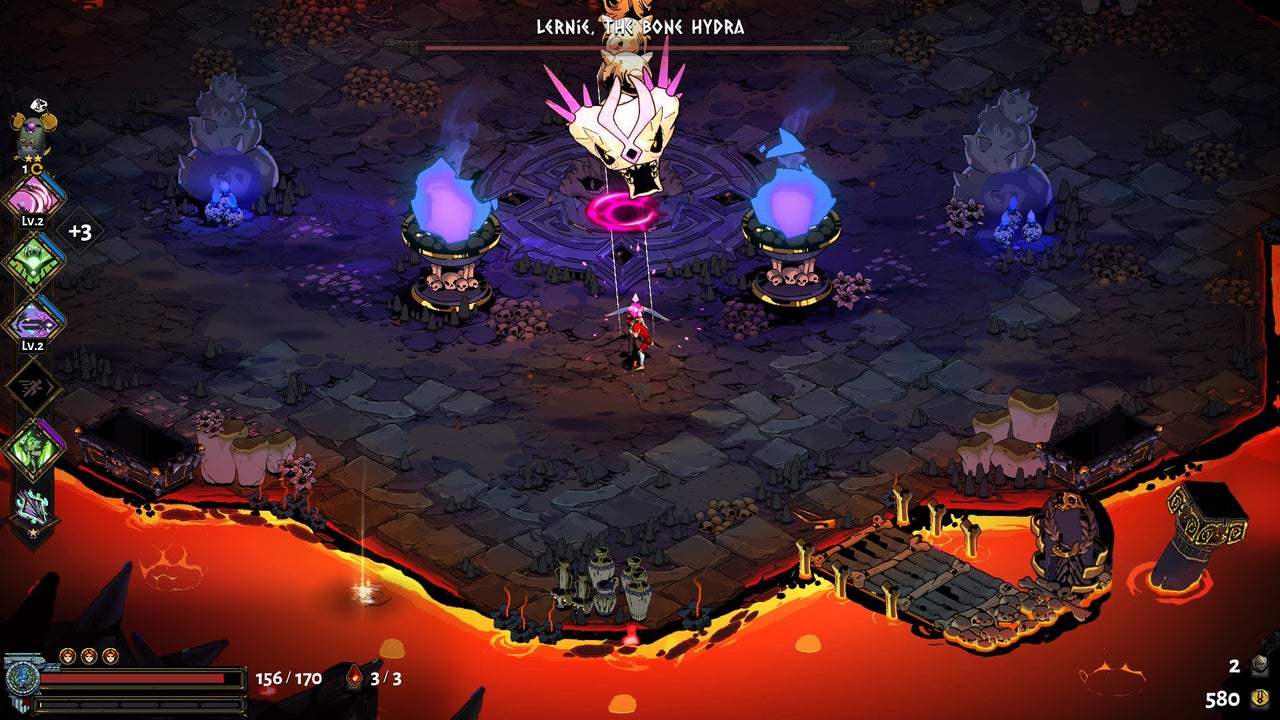 Though this isn’t to make light of the game’s difficulty, as Hades can be a rather challenging game at times. I found myself always scrambling for health in my first few encounters, as each chamber gets progressively more difficult with armored mobs, explosive enemies, traps, tough bosses, and more. While you can upgrade the amount of health you receive with each chamber and occasionally refill health from fountains, I found that it was usually never enough to get through every fight comfortably- primarily because of my aggressive play style. This perhaps is why Supergiant Games allows players to pick and choose which upgrade or item they’ll be rewarded with upon clearing a chamber. This style of gratification makes a lot of sense as players will be able to choose what reward they want depending on their circumstances.

However, Hades’ engaging elements can also at times be its downfall. As a result of the game’s randomized mechanics, it’s not unusual to get incredibly unlucky RNG with boons, health, or items, especially with a specific playthrough in mind. While not often, players can encounter sessions with poor choices for boons, terrible choices of health regen, and more due to poor luck alone. 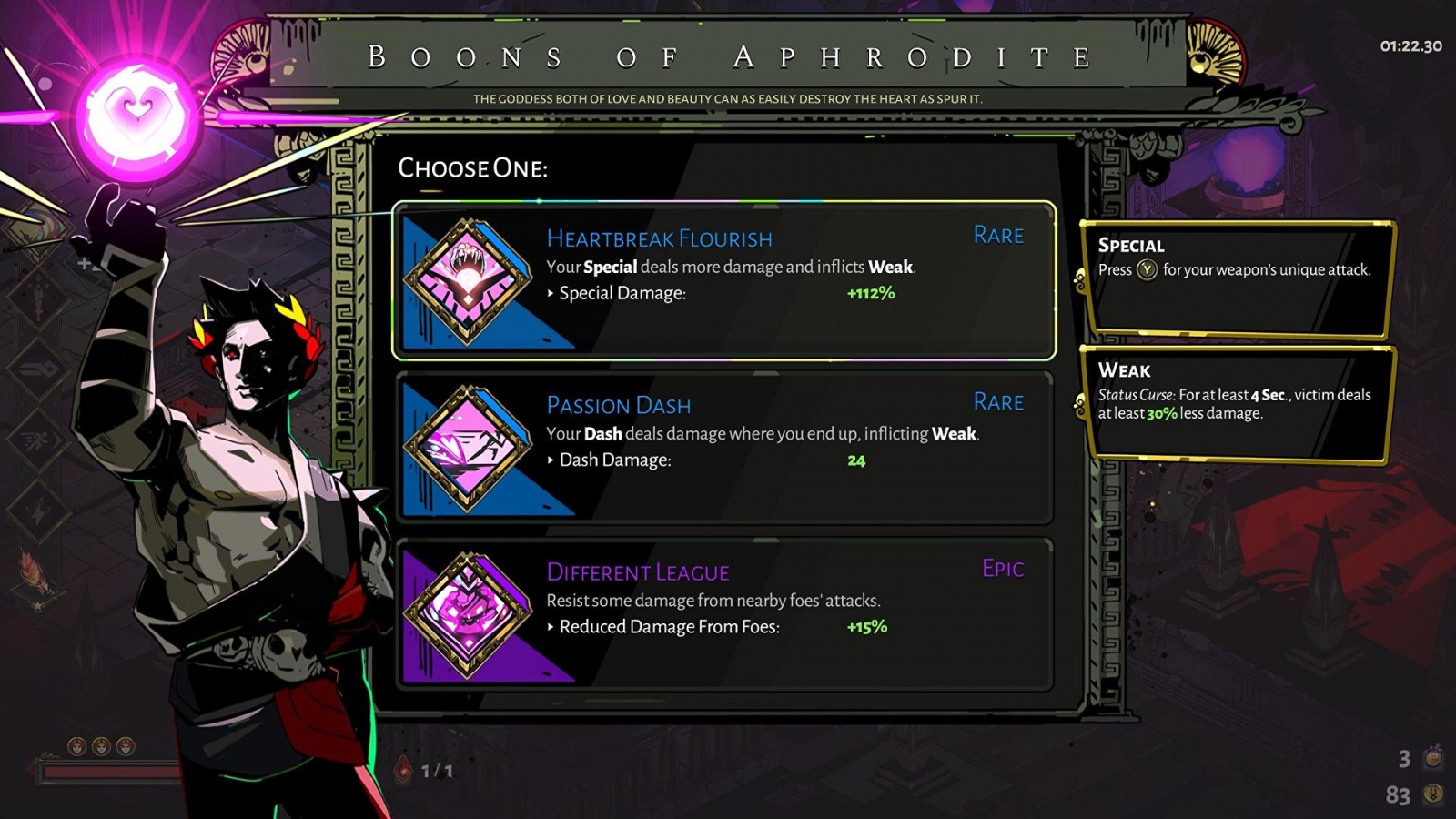 Regardless, Hades is a fantastic game and is really worth all the acclaim and praise it’s received thus far. The game is objectively developer Supergiant Games’ most well-crafted experience. Not only does it offer players a challenge that leaves them with a sense of accomplishment, but it also succeeds in engaging them with lovable characters and an impactful plot. And now that it’s finally available on all platforms, many more players will be able to enjoy this spectacular title.

Hades is a fantastic game and is really worth all the acclaim and praise its received thus far. The game's amazing ability to both engage and challenge you is worthy of applaud and the now that the game is available on all platforms many more players will be able to enjoy this spectacular title.

Abdul Saad is an avid gamer and computer geek. He's been writing for four years on news, reviews, previews, and more on multiple gaming sites. When he isn't writing or playing the latest JRPG, he can be found coding games of his own or tinkering with something electrical.
Related Articles: Hades
Share
Tweet
Share
Submit