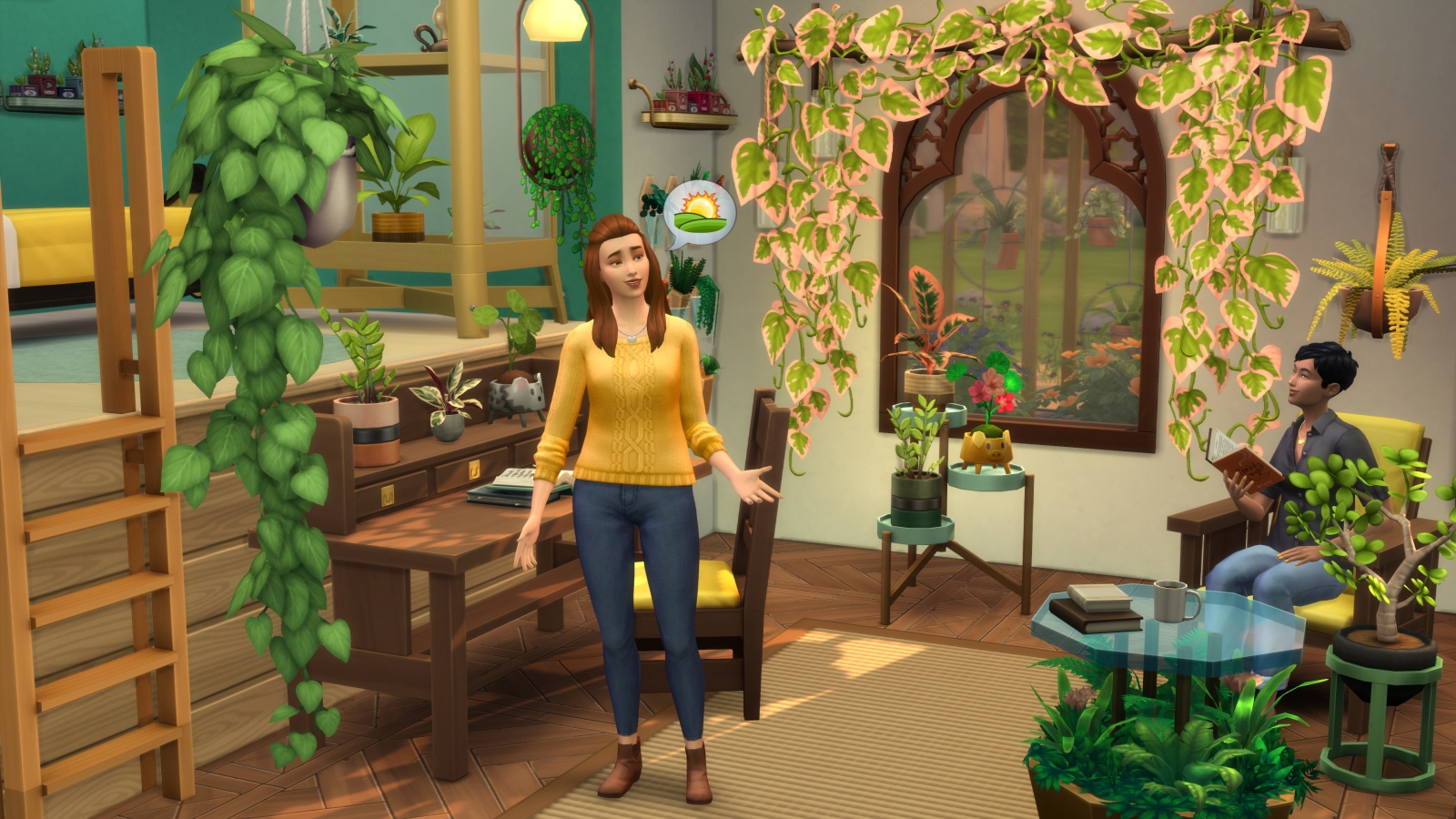 The Sims 4 released their Blooming Rooms Kit on November 9th, making this the 8th Kit to release in 2021. In comparison, they have only released 1 Expansion Pack with Cottage Living, 1 Game Pack with Dream Home Decorator, and 1 Stuff Pack with Paranormal Stuff in 2021. I absolutely enjoyed all of the major content, and most of the Kits, and I am always happy for more content to play with, as I don’t use CC, and use the Gallery items sparingly.

Blooming Rooms gives us a lot of greenery to liven up our homes and outdoor areas. It’s literally nothing but plants, in some shape or form, be it attached to lighting, in the form of cool glass tables, shelving, or entire walls of plants. I decided to use my Cottage Living family for the Blooming Rooms Kit review, because it seemed to fit with the whole country theme they have going on. 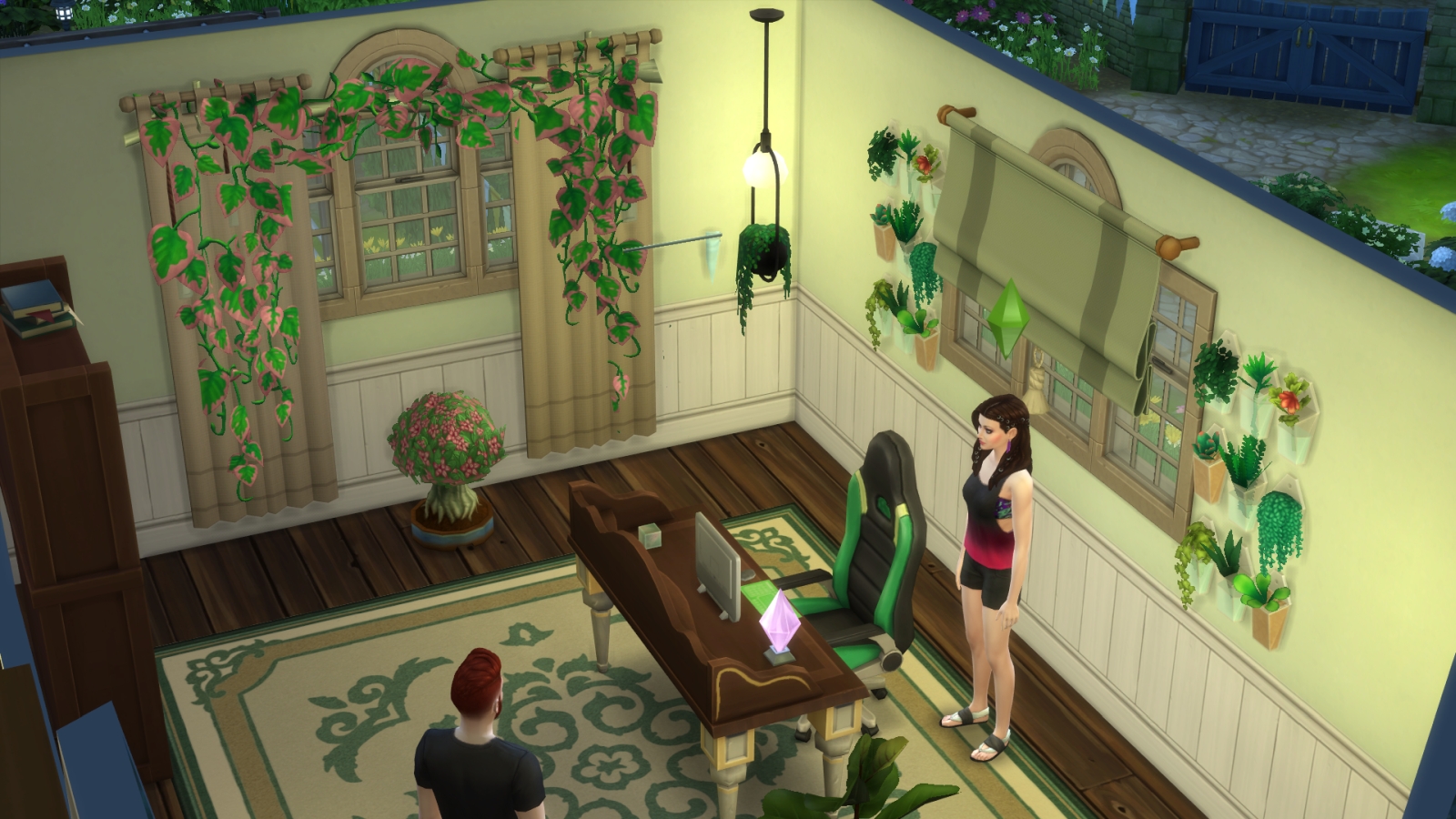 All of the greenery in this room is from Blooming Rooms, including the vine curtain and the hanging lights!

There is a super cute vine curtain that they added with this Kit that looked fantastic on most of my windows. Some of them got wonky and they wouldn’t center properly on it, but I enjoyed the way it looked on the windows I was able to add it to.

The glass end table and foyer table manage to look both modern and laid back at the same time, and they combined well with the “String-of-Pearls” hanging light planter. The other planted light option looked good on my patio for ambiance at night, as they are a bit bigger and sit on the floor rather than hanging from the ceiling. 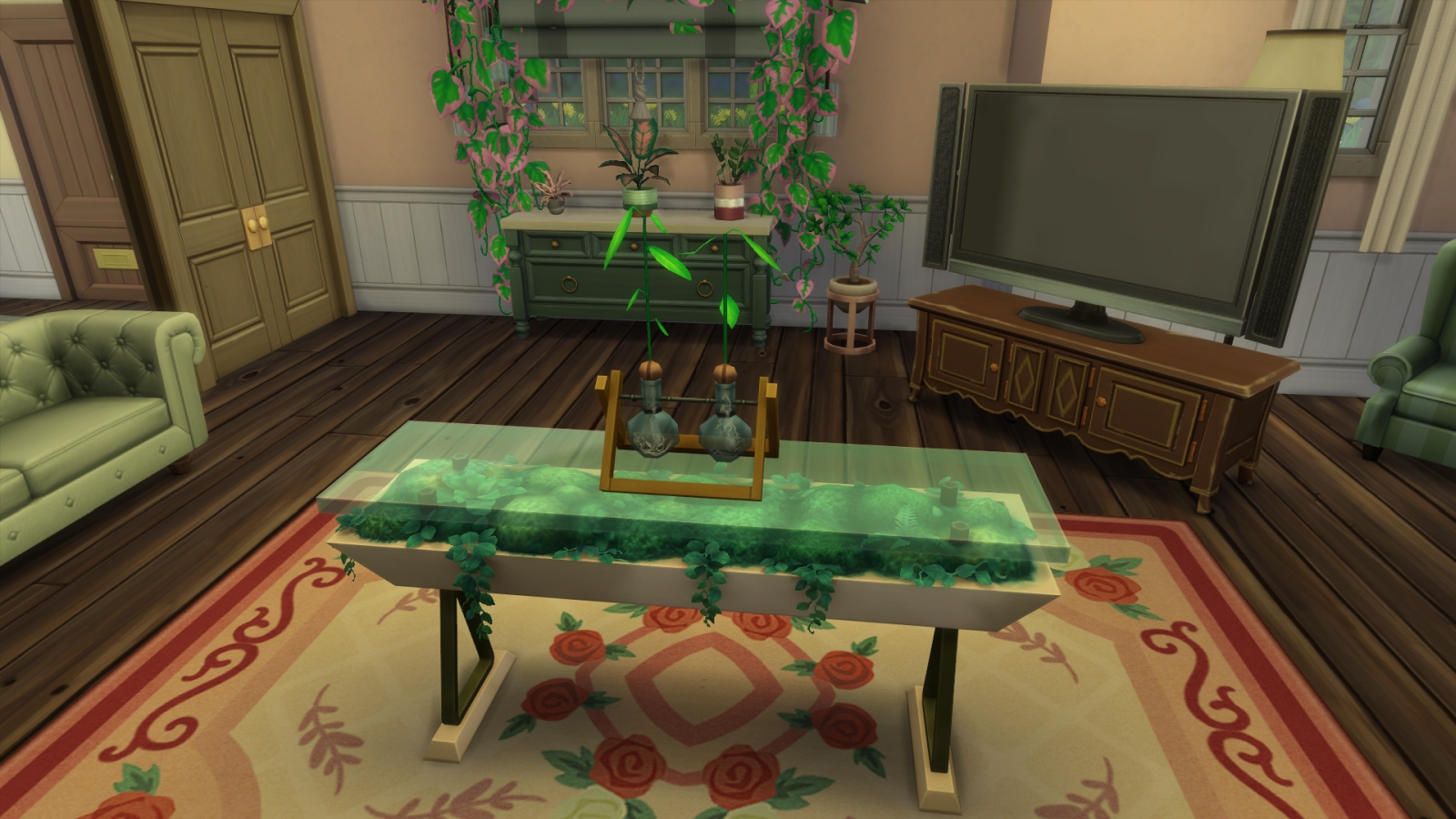 I really like this glass table, and the “Propagation Station” has a lot of details when you zoom in. All the plants in this photo are part of Blooming Rooms.

There are several cute shelves, my favorite being the one that looks like tea containers with the hilarious name “Twee Tea Planters by Simergy Tea Sensations”. The “Wall of Verdant Vases” is very flexible and can be used in various settings, whereas the “Greenholm Greenhouse Shelf” is a bit more obnoxious and didn’t really look great in any location I placed it.

The “Houseplant Hobbyist Shelving” is a nice addition to the game, and someone more skilled with building than myself could probably make something really cool built around this. But alas, my building skills are minimal with The Sims 4, so it just sits in my upstairs loft looking cute with some “Therapeutic Ficus” pots. 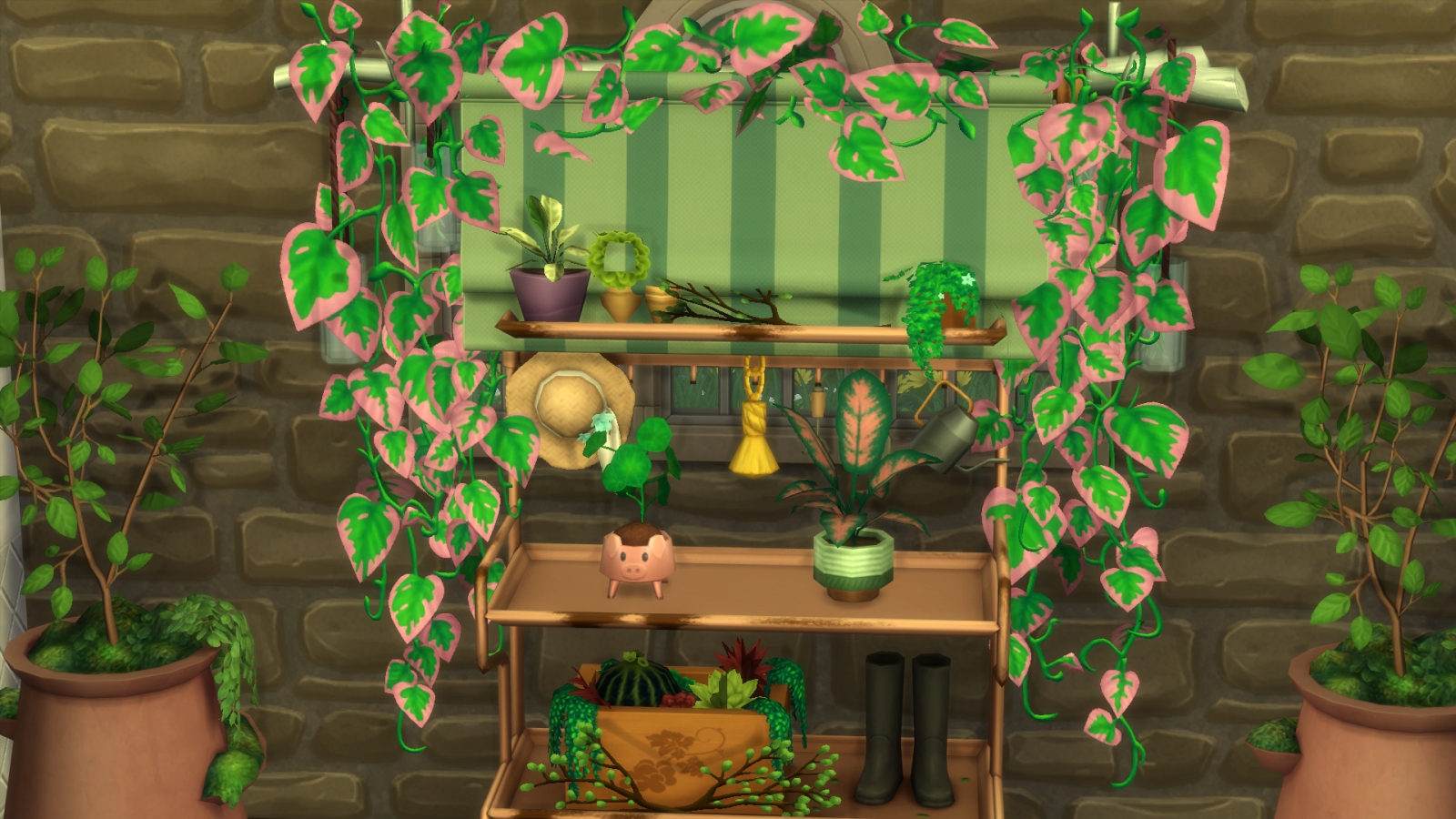 My spruced up second story loft! Everything shown here with the exception of the striped curtain is included with Blooming Rooms!

My absolute favorite thing from Blooming Rooms are the precious animal vases, “Suburb Nasturtiums”! There are 12 different color combinations, and change into a dog, piggie, or hedgehog depending on which variation. They are small and can fit on any end table or desk with ease, and are simply smile inducing. Second place would have to go to the “Propagation Station”, where you can see two avocado seeds growing in glass water bottles. As someone who has done this many times in real life, it was cool to see it in The Sims 4, and they even included the root system! If designing your own room isn’t your thing, they have included a Styled Room called “Plant Lovers Patio” that is all jazzed up and ready to place on your existing Lot! 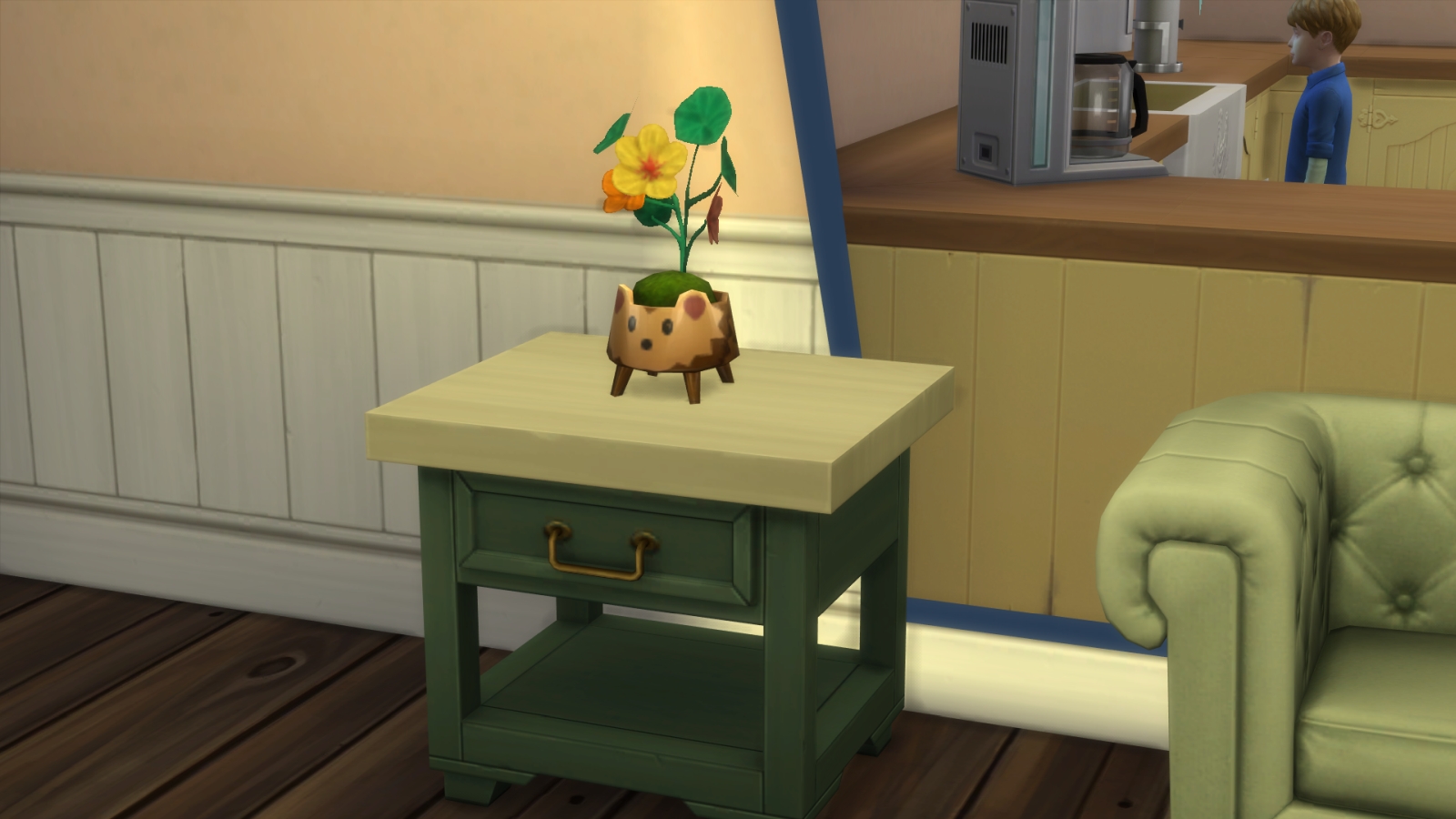 How stinkin’ cute is this little animal planter!? It comes in 12 color variations and 3 choices for animal!

Now, do I think that the Blooming Rooms Kit is a “must have” for your collection? Mmmm, that one is hard for me to say, because I am not the kind of player who can look at one item and see an amazing build out of it. It’s a lot of plants and planted furniture that add to your home to make it feel lived in and cozy, but in my opinion it doesn’t add much else. Courtyard Oasis had some fantastic build items which looked very exotic and different from what we already had…I LOVED that Kit, and it inspired me to branch out and try building stuff on my own which I rarely ever do. Incheon Arrivals and Fashion Street gave us clothing items, even the Industrial Loft Kit gave us a lot of mix and match flexible items that you could use in just about any space.

Blooming Rooms has some great items, but not all of them work in every space. Plus, in my opinion we already had some plant/garden type items with the Romantic Garden Stuff from 2016, which I think would be money better spent if you had to compare the two. Granted, the Stuff packs cost a lot more than the Kits, but I feel like it had more to offer in terms of garden or greenery items.

Either way, the price for The Sims 4 Blooming Rooms Kit (and all other Kits) is only $4.99, which won’t break the bank. I did have fun playing with the new items in the kit, and my house looks much better than it did before. It just didn’t leave me with that excited feeling I have had with a few of their other Kits that released this year.

The Sims 4 Blooming Rooms Kit adds in a lot of plant-type decorations to your home, not only in the form of potted plants, but also planted lights, shelving, a vine curtain, and tables. It gives the player more choices for cozy and homey decorations, but I feel some of them only fit specific aesthetics. While The Sims 4 has definitely had better Kits release this year, at only $4.99 it’s worth picking up so you have options

Holly Hudspeth is a best-selling author living in Fort Worth, Texas. She has six published novels to date; The Skyy Huntington Series, which is an epic dark fantasy adventure, and One Small Detail, a stand-alone medieval fantasy. Holly also enjoys writing fan fiction based on her avatars from games such as EverQuest, Elder Scrolls Online, and World of Warcraft. Her first major purchase at the established age of nine was the NES, and she has been gaming ever since. She enjoys fantasy games, city builders, RPGs, MMOs, SMITE, and The Sims franchise. Most nights she is in SMITE with her husband and friends, or playing ESO. When she isn't gaming, she is probably either at Disney or planning her next trip there.
Related Articles: The Sims 4 Blooming Rooms Kit
Share
Tweet
Share
Submit