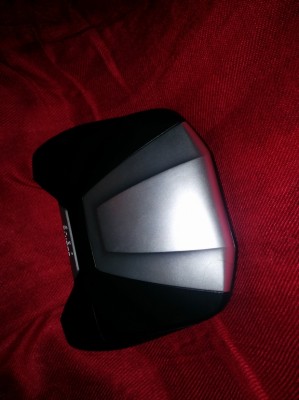 The NVidia Shield is an ambitious device. It’s powerful, it’s versatile, it’s compact, and it’s surprising. It’s also a device with a bit of an identity crisis. I didn’t check it out at launch nearly a year ago as I just couldn’t figure out why I needed it. I have a Tegra-powered Transformer Infinity Tablet – the most powerful Android device on the market at the time, so I was covered, right? After a year on the market, it was time to see just what this little machine can do.

I recently picked up a Shield just before a long trip from Arizona to Michigan. With four hours of flight time and an entire week with no Internet connectivity, I was going to push this device as far as I could in its most detached state.

The Hardware
Let’s start at the top and work our way down. The screen is a 5” multi-touch high-quality display running at 1280×720 resolution that will remind you of any high-end cell phone running in a horizontal orientation. Most of that familiarity comes from the fact that the device is powered by a completely stock Android OS 4.4.2. This means that you can run any downloaded application that you would on a comparable phone or tablet. The screen is part of the hinged hard clamshell that closes over the controller, keeping the screen safe and sound when the device is not in use.

Moving down the sleek exterior, the controller portion feels like something between an Xbox 360 and the original Xbox One “Duke” controller in size. The engineering team at NVidia likely did a tremendous amount of work to get the balance just right because it is very comfortable. Just above the left analog stick is a very solid D-Pad which is simply perfect for old school fighting games, and they sit opposite the standard A/B/X/Y face buttons. The analog sticks are parallel instead of offset, and concave like a set you’d find on a PlayStation controller. These sticks and buttons are all flanked by a shockingly powerful set of speakers and an integrated microphone. The buttons, sticks, triggers, and shoulders are all perfectly placed for my meaty hands, but the screen configuration leaves them slightly recessed in the housing of the controller. While it didn’t make a bit of difference to me, I can see how those with smaller hands might not find it quite as comfortable.

The heavy lifting for The Shield comes from the NVidia Tegra 4 quad-core mobile processor sporting 2GB of RAM. The system has 16GB of internal storage, but a MicroSD slot in the rear of the device grants you an option to add another 64GB of storage rather easily. Making up the bulk of the device is the substantial 28.8 Watt hour battery. This whole system comes out to a weight of 579 grams or 1.2lbs. For basis of comparison, an Xbox One controller is just 280 grams or 0.61lbs.

The Experience
As I took my seat on my outbound flight I brought out my Shield and fired up MAME. The Multi-Arcade Machine Emulator allowed me to play old arcade games that I’d just never gotten to finish like Rastan and Rygar. Android powered devices have a solid array of emulation opportunities, covering everything from the NES to the PSP, where old folks like me can relive their childhood. The problem has always been getting a controller synced because, let’s face it, for the most part touch screen controls suck. As The Shield has an integrated screen, dual analog thumbsticks, and four face buttons. It also has a pair of triggers and shoulder buttons. If you are getting a vibe like this is an Xbox 360 controller attached to a high-resolution screen, you’ve got the right idea. After playing Bubble Bobble for hours I dropped my tray table and fired up a movie.

Given that apps like MX Player support just about every media currently in use on the Android platform, you’ll be able to play just about every type of media you can imagine. Snapping up the digital versions of a few TV shows and movies, I reclined my seat and settled in for some mindless entertainment consumption.

The Shield’s well-built body serves as a stable platform for the device. The 5” screen can hinge a full 180 degrees from the closed position, satisfying any viewing angle you might want. After watching Best of the Best on the device, it was time to close the clamshell for a bit.

During the flight I had gamed and watched movies for four hours continuously. I played emulators, I watched a full movie, and I played a good chunk of Half-Life 2. As I hit the home button on the device and popped back to the home screen I smiled at the battery indicator – it had hardly budged from full. It would be around another four hours of use before I felt the need to plug in the device.

The final test for The Shield came in the form of a favor for my father-in-law. A career truck driver, he is a long-time listener to The Howard Stern show. Howard had a birthday late last year but my dad only got to listen to the event. I bought the DVD for him as a gift, but I also dropped a digital copy on the SD card. With a mini-HDMI adapter I was able to pipe the show directly to his Onkyo surround sound system for him to watch for his own birthday bash.

The Shield raises eyebrows
Heading back to blisteringly-hot Phoenix and enjoying the warm brace of broadband once again, I fired up The Shield at my house. Without a single bit of configuration I was able to bring up a Youtube video and then push it to my TiVo or directly to my Panasonic TV, making media sharing extremely easy. Similarly, by only putting in a code to link them, I was able to connect to my entire Steam library.

As I’m using a GeForce GTX 760 graphics card in my desktop (the requirement is at least a 650), I was able to remotely browse my Steam library. With a solid enough wifi connection and on an ever-expanding list of games, I was able to play games remotely on the Shield console directly. On shooters and third-person adventure titles, The Shield worked flawlessly. Borderlands 2 on the Vita is great, but Borderlands 2 streaming from my PC to my Shield is simply beyond epic.

For games that truly require a mouse and keyboard, The Shield has you covered. Using Bluetooth you can connect both, using the device as a bridge. This means you can play your games at 1080p and at 60fps on your TV in another room using a tried and true PC interface.

The streaming capabilities aren’t quite perfect on The Shield. The GameStream app occasionally crashes, and there are thankfully-infrequent framerate issues, but given how far this application has come in the last few months I suspect these might be fleeting issues.

It wouldn’t be fair to call this device an emulation and media slinging device as there is a wealth of entertainment awaiting you on the Google Play store. NVidia has fully supported the device with an area called the TegraZone that showcases the best games for the Android platform, all fully optimized for the Tegra chipset. Games like Trine 2, Portal, The Walking Dead, and the aforementioned Half-Life 2 are joined by native titles like Mount and Blade, Burn Zombie Burn, and Anomaly 2. These games aren’t necessarily built for The Shield, but with very little control fiddling I was able to turn off the on-screen touch controls and enjoy the full experience.

Awaiting me in the Play Store are the last two true testaments to The Shield’s usefulness – Hulu+ and Netflix. Futurama, House of Cards, and Bob’s Burgers plus a mini-HDMI cable creates a media system that could be useful in a hotel room, a cruise ship, or anywhere that isn’t home. No longer do you have to lug a laptop to enjoy Firefly on the go.

As a very portable all-in-one device, The Shield is perfect for streaming shows on the go. Netflix, Hulu+, or locally loaded, The Shield can tackle any format you might be using, as well as any of your music needs. As a gaming device it can handle just about anything you can throw at it. Tapping into the entirety of your Steam library, whether it be with the integrated controller, or with a Bluetooth keyboard and mouse, is certainly compelling when it behaves. I’m still not 100% sure where this iteration of The Shield fits into the gaming landscape, but I can tell you that it is officially my go-to console for my last trip and any future ones for the foreseeable future.