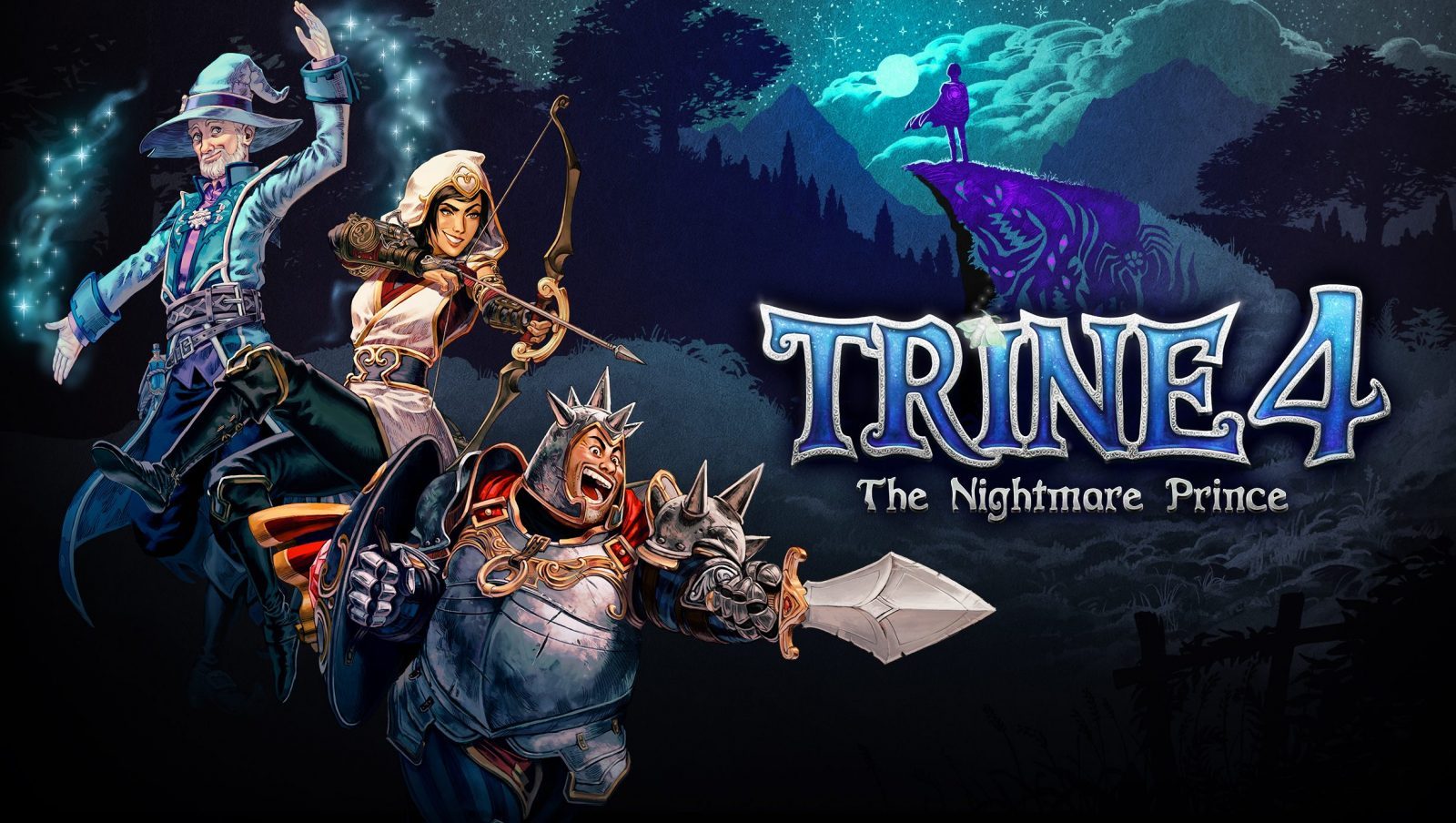 Trine has always been a series that I’ve enjoyed. With its quirky characters, beautiful and lush flora, and fixation on puzzles, Trine 4: The Nightmare Prince has become my new favorite in the series. Back to its 2.5 D-style gameplay, it takes full advantage of the side-scrolling magic once again. And on the Switch, it feels at home. As a fan of the series, I was excited to see what new stories, game mechanics, and puzzles Frozenbyte would throw at me, and they didn’t disappoint. With Amadeus the Wizard, Zoya the Thief, and Pontius the Knight back on their wild adventures in the gorgeous and highly detailed world, Trine 4 felt like it picked up exactly where the series left off. For those who are uninitiated, Trine is about taking control of three very different heroes and going on mystical adventures involving magic and puzzles, all while playing through a whimsical story.

The story begins with you taking control of Amadeus the Wizard who can create objects out of thin air. As with Trine 3, we get a taste of what each hero’s life is like before they join forces with the other heroes and begin spewing sarcastic anecdotes towards one another. Because the game is, at its core, a puzzle game, it allows the player to come to grips with the hero’s powers and abilities, and how they interact with the world before the actual adventure sets off. Where this game differs from its predecessor is that the action is less of a focus and many of the abilities that you started with in Trine 3 must be unlocked in Trine 4, and that’s not a bad thing. In fact, it allows for the player to use their creativity to solve puzzles and carve out their own path in the world of magic. 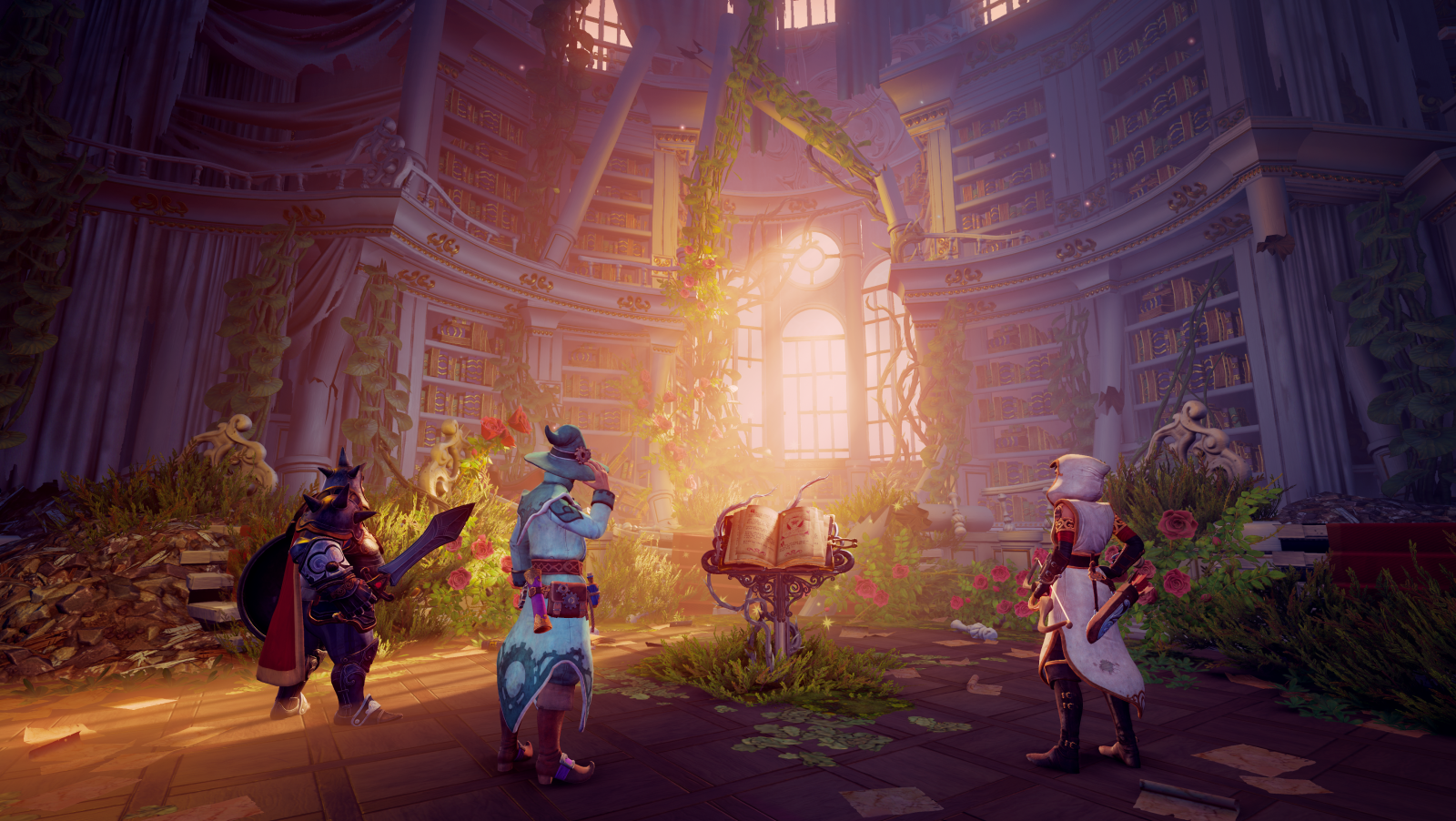 The crews back together again

With Amadeus having the ability to make boxes out of thin air (odd ability, I know) and levitate objects, you’ll find that his abilities are most utilized throughout the game when it comes to solving the challenging and dynamic puzzles that force you to use all of your problem solving skills in order to progress. The initial levels are there to guide you through managing each hero’s unlocked powers. You’ll use them as step stools to reach new heights, swing across gaps, move environmental objects in the world to collect items. What’s great about Trine is that there is no specific way to play. Countless times I’ve solved puzzles by simply being creative and using objects in the world to narrowly escape doom or get out of a tight spot. Controlling the boxes takes some getting used to, especially on the Switch, but after a few minutes I was stacking boxes like UPS. Once you come to terms with the mechanics of the game, you instantly notice how beautiful the world and characters are that inhabit it.

The snowy regions you first experience are beautiful and amazingly detailed. Though the resolution and extreme level of detail is limited on the Switch, it’s the puzzles, creative level design, and game mechanics of the world that are second to none. From snowy regions, lush-green forests, factory-like industrial areas, castles, and tombs, each have their own flamboyant style and character. And with those styles come puzzles, puzzles and more puzzles. Did I mention that there are puzzles in this game? With Trine 4, they spared no expense on creating a world where solving puzzles felt like an integrated part of the gameplay. The puzzles always appeared to have been crafted to the tone of each level, and their complexity increases the further you progress in the game. There are hundreds of puzzles that you will solve in order to progress or find collectibles in the world. But let me not get ahead of myself. 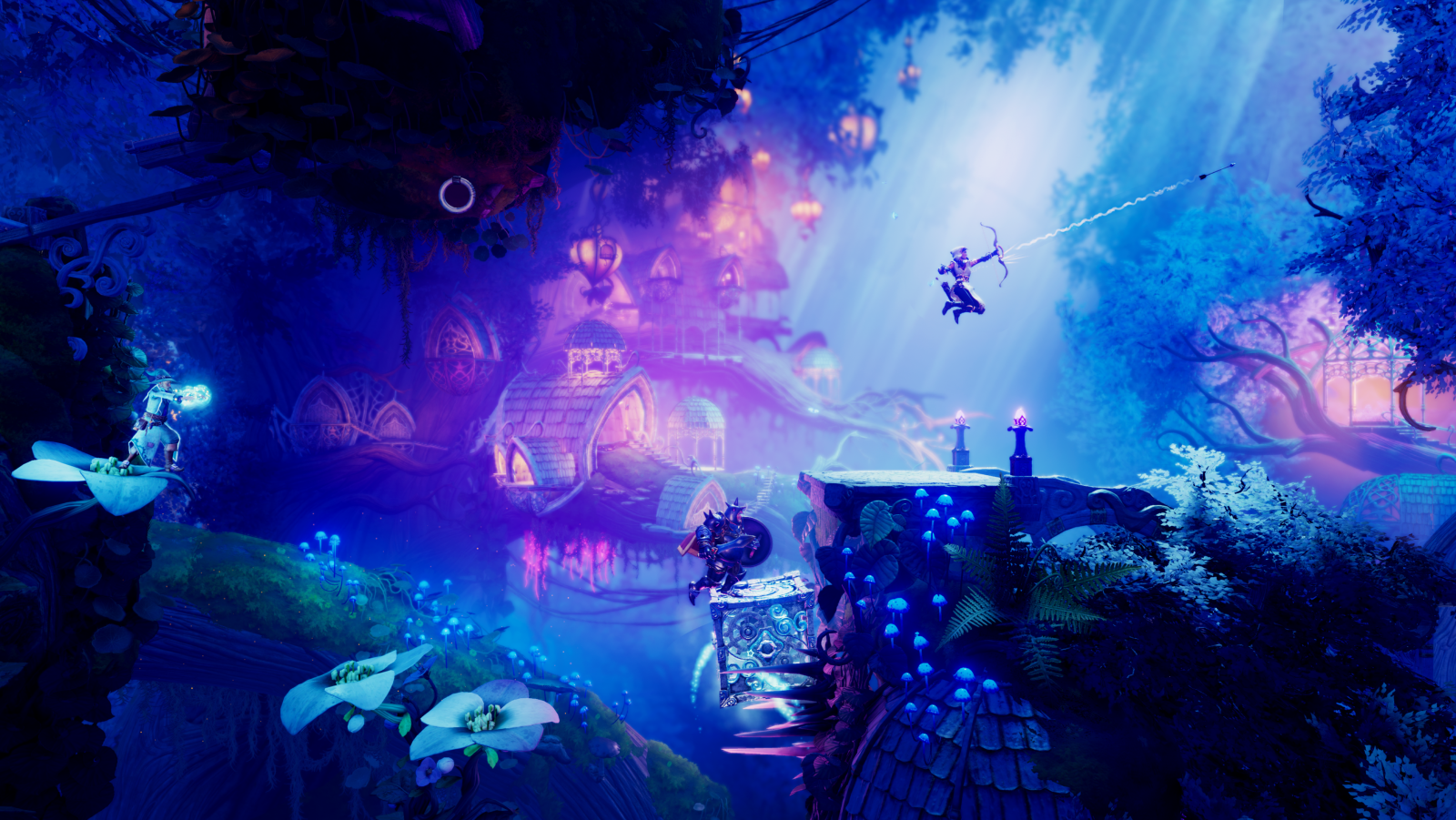 With each of the first three levels built on allowing the player to come to grips with each hero’s abilities, you are set on a quest to solve those puzzles and stop the rogue prince’s dreams from becoming nightmares. Oh, yeah, the story. There is a story, and it’s a fun and interesting one that fits well within the world of Trine. The heroes are called to action when Prince Selius, a student at the Astral academy of magic seeks to improve upon his magical abilities but accidentally turns his dreams into realities. Though the story of Trine 4 is enthralling and exciting, it feels a bit dialed down when compared to Trine 3’s. With this iteration, it’s the puzzles and level design that take center stage.

Once you’ve learned how to create boxes from this air, use Zora’s rope and arrows, and smash things with Pontius’s sword and deflect items with his shield, the game is in full swing. With the jovial banter between the three underway, you take control of each hero as you make your way through the world to find the prince. Having the ability to change characters on the fly is an integral part of the game’s puzzle system as you will need each hero’s abilities to solve the complicated and mental testing puzzles. Once you come face to face with the prince and realize he is a greater threat than believed, he hastily scurries, leaving you to give chase. 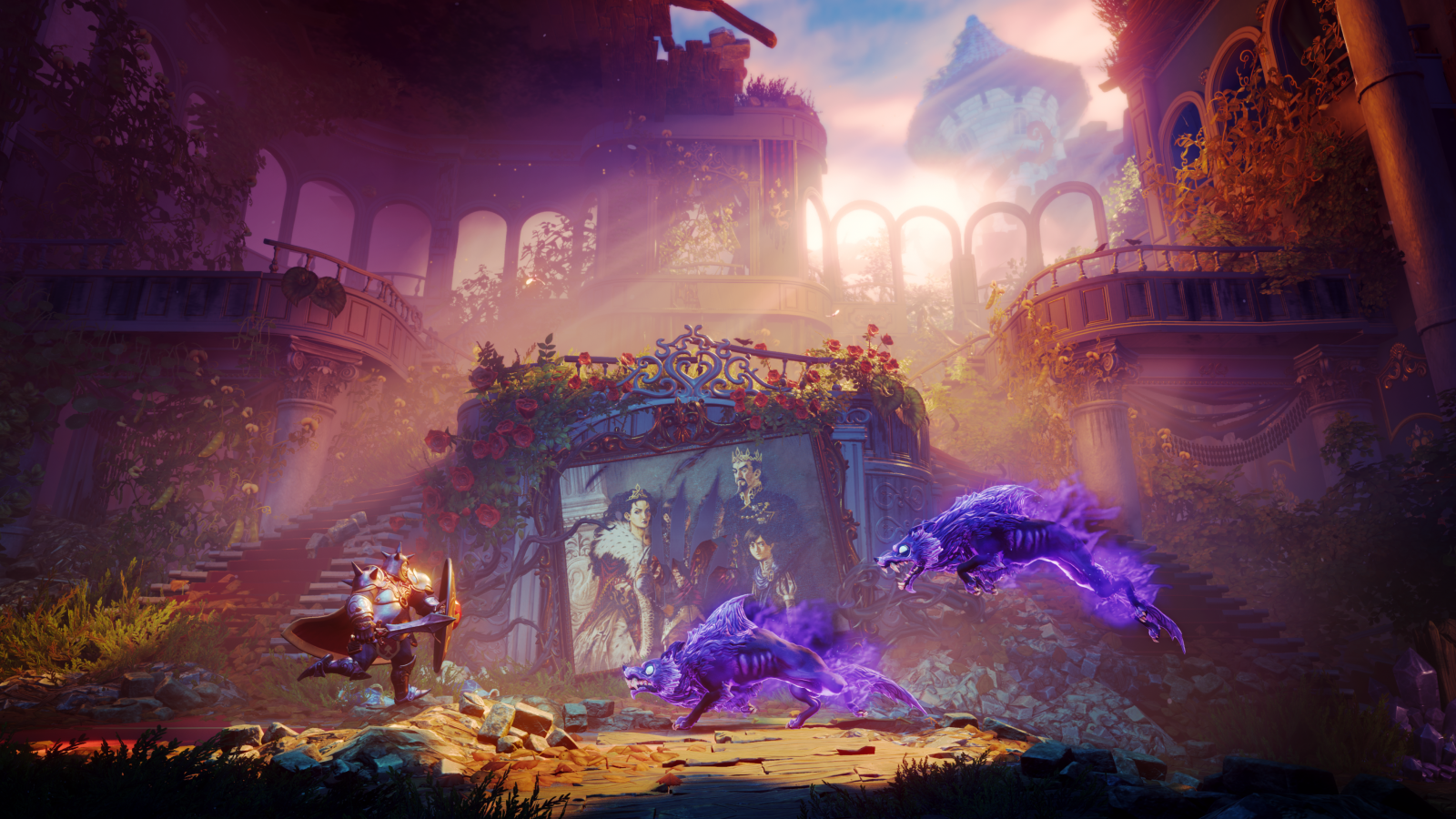 You quickly make the world your playground as you creep through beautiful landscapes. Interacting with the world has always been part of the Trine magic. From diverting the flow of water to make a plant grow so that you can pass a gap, using Pontius’s shield to deflect light off a reflecting box and onto an orb to open a door, or hitting multiple contact points using all three of the heroes’ abilities are just some challenges to wet your whistle and prepare you for what’s to come. Once you begin collecting orbs and leveling up the hero’s abilities in a very basic skill tree, the puzzles become more intricate, frustrating, and pure torture – but it’s all in good fun. I found myself utterly frustrated when I had to MacGyver a room full of lasers that were firing in different directions with just a box, a plank, and a shield; but when you start thinking in a problem solving and strategic manner, you begin to start to understanding how the hero’s abilities can be used to solve these perplexing and sophisticated puzzles.

Though the game is a side-scrolling, platforming action game, the battles with the prince’s nightmares are a bit static and uninspired. I personally didn’t feel as though combat favored any character except for Pontius. With the prince’s nightmares quarantining you to a small area to fight them, and the limited enemy types, the action of the game feels limited and not meant to challenge you, but simply a hindrance. At one point, I simply stood in a corner with Pontius and deflected the incoming projectiles at the attacking wolves and enemies that shot them. But to be fair, Trine 4 is focused on getting back to the roots of Trine as a puzzle-platformer rather than the action-adventure of previous iteration. 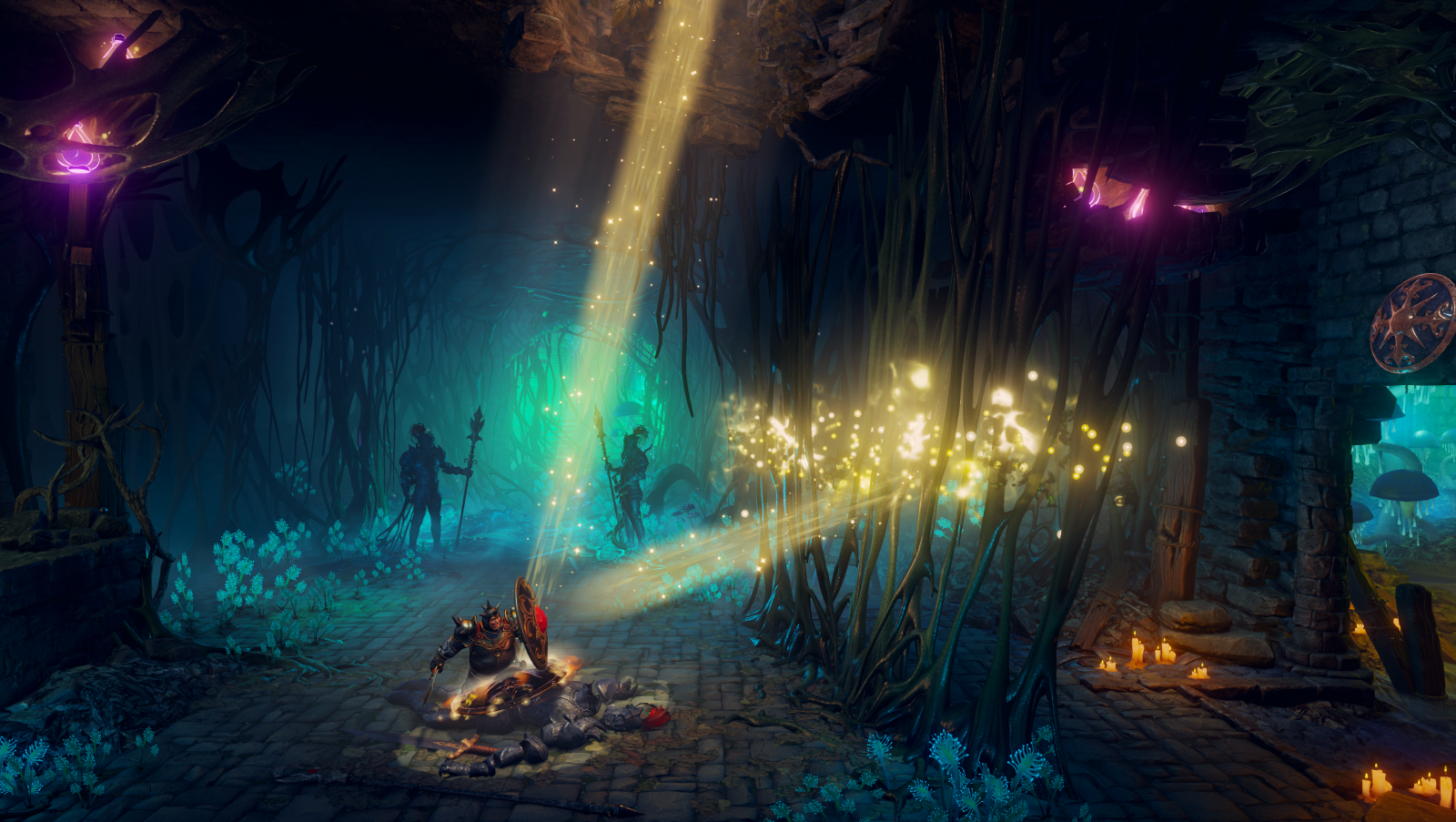 A knight in shining armor

With the prince losing control of his magical abilities, he tests the heroes by making them face off against their own fears. With Amadeus’s magic abilities being tested by a witch to brew a potion, Zoya fighting Princess Zoya, and Pontius fighting for his right to be a knight, this was a welcomed challenge as it made the game’s story feel personal. Unfortunately, this is the story peaks. When the prince is confronted and defeated, the story ends a bit abruptly, lacking closure. It’s clear that the focus of Trine 4 has shifted from being an action-adventure game to getting back to being a problem-solving puzzler, and it does it well. Though the story does fall a bit flat, I wish that some of the action areas offered the complexity the puzzles did. Also, this game offers a multiplayer that offers an even greater challenge. With up to 3 players experiencing the magical world at once, the puzzles and challenges change per the number of players playing. Unfortunately, at the time of the review, I was not able to test this mode.

With Trine 4: The Nightmare Prince, Frozenbyte has returned the series to its origins by making dynamic puzzles the main attraction. On the Switch, the controls feel tight and the basic button layout and controls feel natural. There are so many fun and perplexing puzzles in this game that it’s worth buying just for the challenge of teasing your brain. Though the story and action lacks a bit of depth and gets lost in the complexity of the puzzles, I found this to be one of the best experiences on the Switch.

T.K. is a freelance writer, narrative designer, and author. Writing and developing narratives and giving voices to digital world and characters is his passion. As a game writer, QA game analyst, and editor for Gaming Trend, he enjoys being a part of the gaming industry.
Related Articles: Indies, Trine 4: The Nightmare Prince
Share
Tweet
Share
Submit