Maker games, like Little Big Planet and Super Mario Maker, have always been popular. At their best, they are virtual spaces where anyone can put on a game developer’s hat to create any kind of content they wish as well as find like-minded creators. Aside from actually making your own game, which can take years of hard work, this type of game offers a toolset to create pretty much anything you want, within reason, in just a few hours or days. Unfortunately, most games restrict this user generated creativity to a certain platform, but here’s where Levelhead comes in: the game is available on every modern console, PCs, and even Smart Phones. You can start creating a level on your Switch, get on the bus and keep creating on your phone, then add the finishing touches on your PC.

As a member of the Levelhead division, your job is to create and play through levels in order to train a package delivery robot named GR-18 so they can be prepared for any delivery situation conceivable. The adorable robot GR-18 can run, gaining a burst of speed after running long enough, jump, and grab objects using their telescoping arms. Your task in every level is to bring the package to the goal. Some levels start with the package right next to you, while others may have you search for it or find a key to unlock the door it’s behind; it all depends on the creator’s whims. You can also use the package in creative ways, like throwing it down for some extra jump height or standing on it as a platform to cross a pit of spikes. While GR-18’s skills and the package have to be in every level, there are other powerups, enemies, and objects to interact with that you can put in your levels. There’s too many to list here but as an example there are multiple types of switches, doors, and new abilities to satisfy just about any 2D platforming urge. 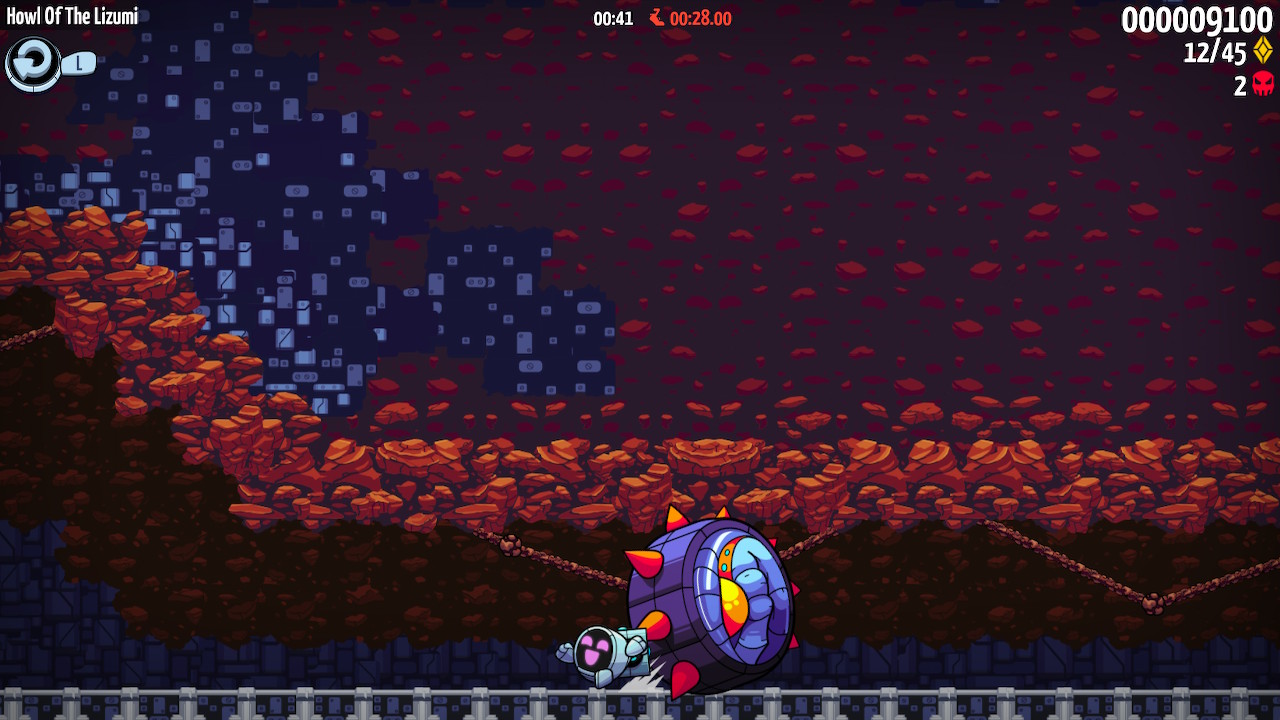 Upon starting Levelhead for the first time, you’ll be welcomed into the Levelhead division by a hilariously incompetent intro video. It’s got a similar vibe to Moving Out’s humor, but with several more layers of irony, as your superiors tell you how great they are for programming robots that may accidentally kill people, but have really nice moustaches, then sing a song about how good they deliver your goods (Hint: real good). The voice acting’s… quality really helps sell the idea that you’re working for a giant corporation where no one really knows what they’re doing, and these presentations sprinkled throughout the single player portion are both very informative and hilarious. The levels themselves are mostly well designed, with a focus on giving you inspiration for your own levels or teaching you how mechanics work and can be manipulated. Unfortunately, a lot of the levels can leave you with no idea how to progress or ask you to make some incredibly precise movements, and if you can’t figure out how to get past a particular stage, that’s it. No more progression until you do. While you do earn new profile and level pictures as you progress, it would have been nice if the difficulty curve wasn’t so steep or you could skip a level you’re stuck on. It’s frustrating to get in the groove of learning about a new object and thinking about how you can use it, only to have your momentum halted by a particularly complex stage that doesn’t quite communicate what you need to do.

If you’re more so the creative type, rest assured that the toolset on offer here is extremely robust. You’ve got the typical solid platforms, disappearing platforms, and platforms you can drop down through, but you can also decorate the backgrounds or make hidden false walls and floors, place cannons ala the Donkey Kong Country games, gems to guide players or add to their score, and make switches that can detect anything you could possibly think of. Most placeable objects also come with additional options you can tweak in a small menu, like adjusting a thing’s visibility or turning it on or off when it receives a signal from a switch. Initially I found the sheer amount of objects overwhelming, but after playing the very difficult story mode to learn about each object and going through a short tutorial I felt… a little less overwhelmed. There’s a TON of stuff to put in your levels; I prefer to make simple, short platforming challenges, but I’ve played levels that focus on surviving in a blizzard, puzzle solving, or conquering multiple, smaller tasks. The community for this game has already gone wild, and shows no signs of stopping, especially with the game’s focus on that community. 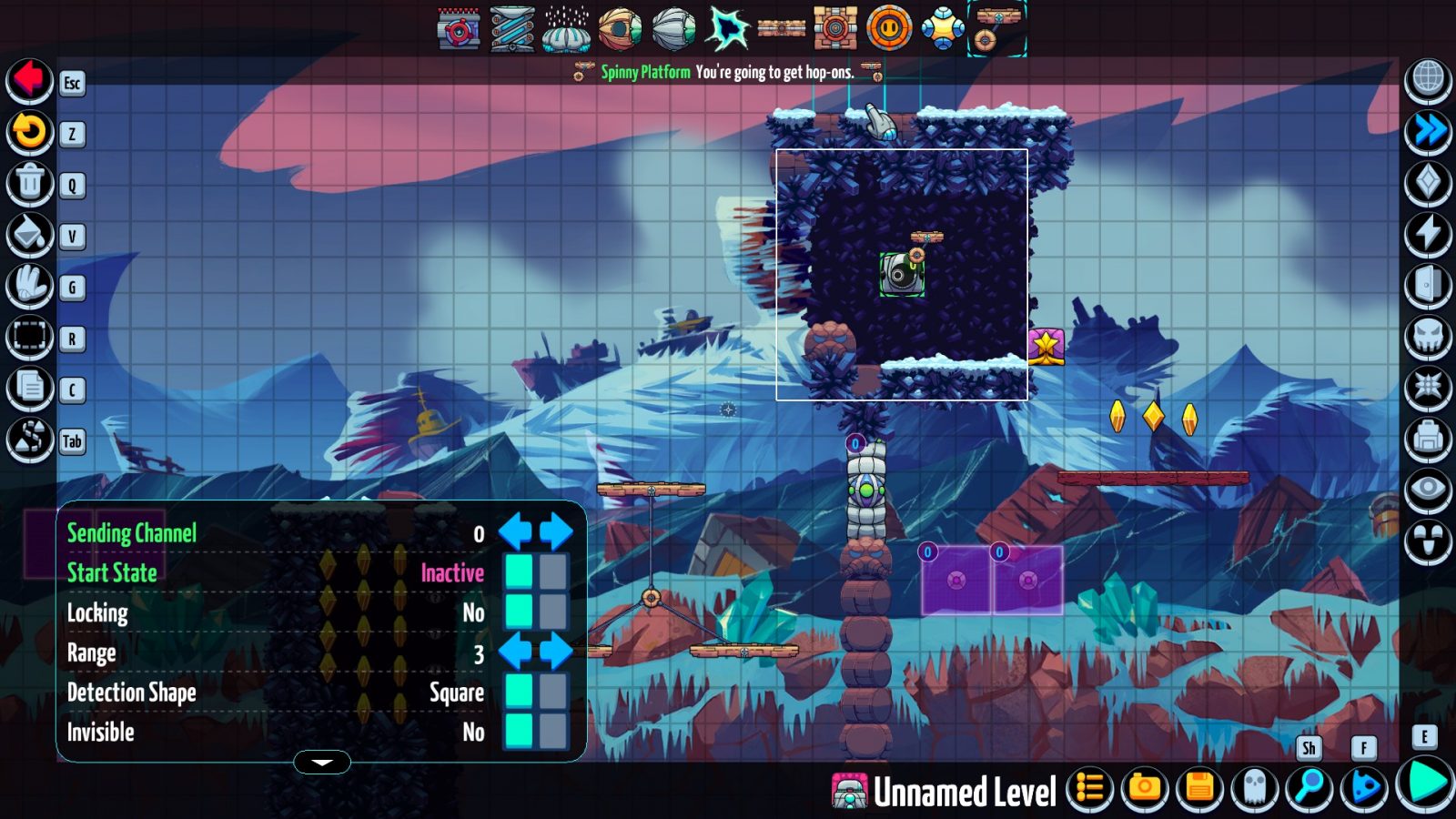 If, like me, you’ve made levels in other maker games that never get played, Levelhead has the solution: Exposure Bucks! By playing levels in the marketing department, you’ll earn Exposure Bucks that you can spend to promote levels, either your own or someone else’s. The best levels in the marketing department can then be chosen by the developers and placed in the tower, a permanent place of honor. So if you want to rise to the top, you better get playing others’ levels. You’re also invited to share and promote your levels on the game’s official discord, subreddit, or other platforms which are linked right in the game’s menus. Finding the types of levels you actually want to play (that aren’t already in the tower) is another story, however. Like its contemporaries, Levelhead has an abundance of super difficult user created levels, and it’s hard to find something that’s a bit more my speed. Granted, the developer provided campaign is also very difficult, but I still wish it was easier to find, well, easier levels. The Tower does have multiple sorting options to find the perfect level for you, but the Marketing Department is only sorted by the amount of exposure bucks a level has. As an in-game tip says, you often underestimate the difficulty of your own level, and going through levels that are tagged as easy, normal, or all around not precise platforming still yields levels that could be considered too difficult. In addition, when publishing your level you’re only given preset phrases with which to name your creation, which makes it even harder to tell what a level will be like at a glance.

Levelhead is an astounding creation from such a small studio. It’s not just a toolset or portal for platforming levels, it’s a community of creators all over the world supporting each other. It’s not perfect, the single player is aggressively difficult and some aspects of sharing or finding levels leave a bit to be desired, but it’s clear that this game is going to be supported by players and developers alike for a long time to come.

David is the kind of person to wear his heart on his sleeve. He can find positives in anything, like this is a person who loved Star Fox Zero to death. You’ll see him playing all kinds of games: AAAs, Indies, game jam games, games of all genres, and writing about them! Here. On this website. When not writing or playing games, you can find David making music, games, or enjoying a good book. David’s favorite games include NieR: Automata, Mother 3, and Gravity Rush.
Related Articles: Indies, Levelhead
Share
Tweet
Share
Submit