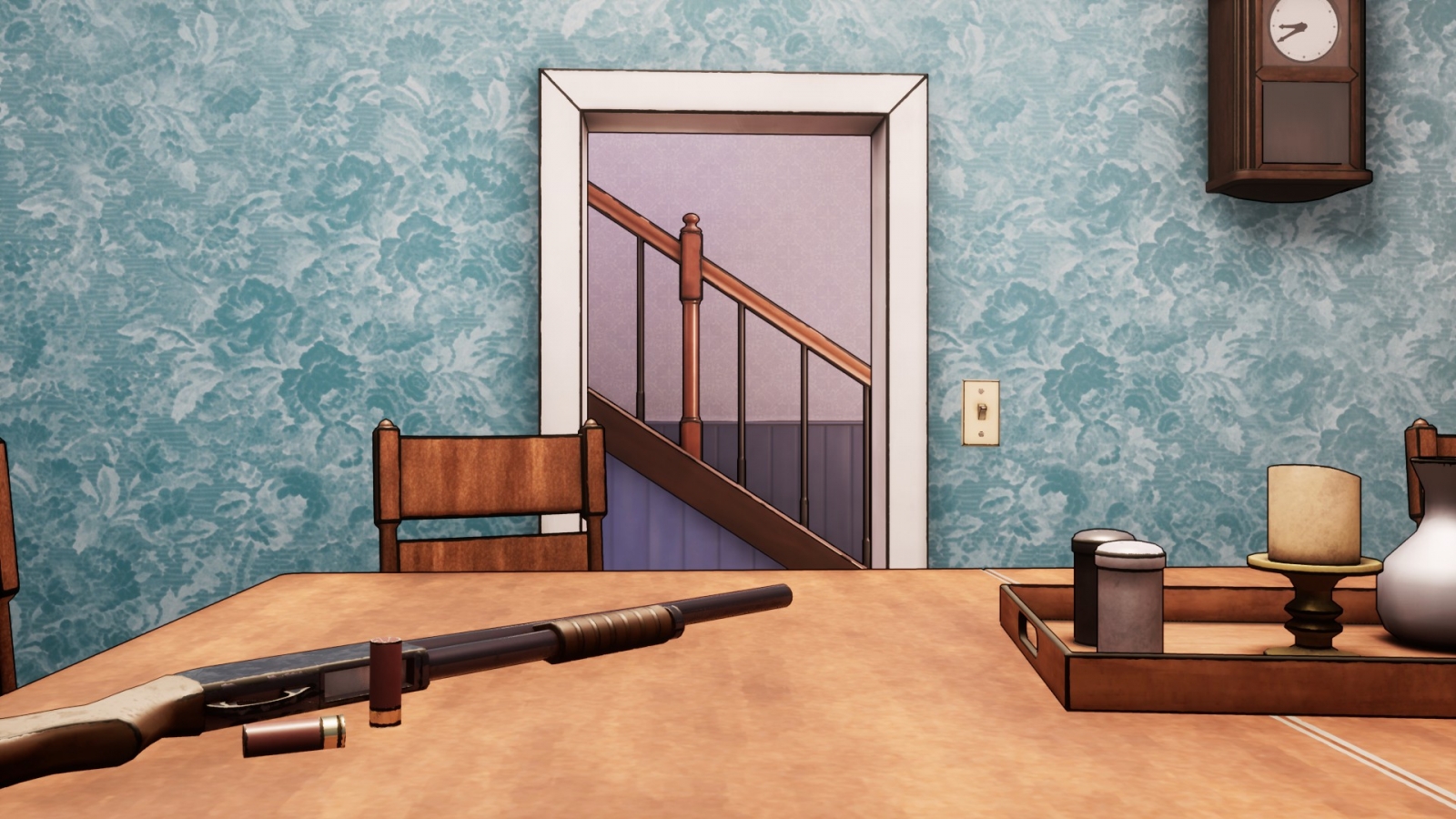 You already know how this story ends. A pig farmer who disposes of bodies for the mob wants out, and the mob only has one way they sever ties. Adios is a series of conversational vingets between the pig farmer and the hitman who will kill him when the day is over, but more than that it’s an exercise in empathy. You will understand exactly why both the farmer and the hitman make the choices they do, even if you don’t agree.

Short content warning before we get into it, this game deals with a lot of heavy ideas, namely suicide, loneliness, and grief. If you can’t deal with those right now I totally understand, but I want to warn that this game tackles those dark themes.

Adios is a first person narrative focused game with very little “conventional” gameplay. While you’re free to interact with the environment at all times and there are some dialogue choices, you’re mostly here to watch and listen to the farmer and hitman’s conversations. Some people may say that because of this Adios doesn’t count as a game, much like visual novels, but I don’t think this experience would be nearly as effective as a short film. The first person perspective in particular is great at establishing an immediate link between the player and character, and being able to interact with so many things in the environment helps make the farmer’s home feel like a real place. I don’t want to spoil anything, but the game does something very interesting with dialogue choices that convey so much about the farmer a non-interactive medium ever could.

So what are you actually doing in this game aside from talking? Farm chores! As you take the hitman around the farm, the two of you will do things like milking goats, shoveling manure, fixing a car, eating breakfast, shooting a really great shotgun, and more. It sounds simple on the surface, and can be more than a bit janky in practice, but again you’re really here for the conversation. Those conversations are captivating, they’re very well written and well acted. The dialogue conveys a lot more than just what they say, which is helped by the incredible performances given by D.C. Douglas as the Hitman, who you may know as Wesker from Resident Evil, and Rick Zieff as the farmer, who was in Terminator 3. You can watch the gameplay video to see for yourself, but these two actors (and everyone else involved, really) give it their all and make both characters instantly likeable. With this in mind, Adios says so much more with its short runtime of about an hour than just about every AAA artsy game can say in twenty. 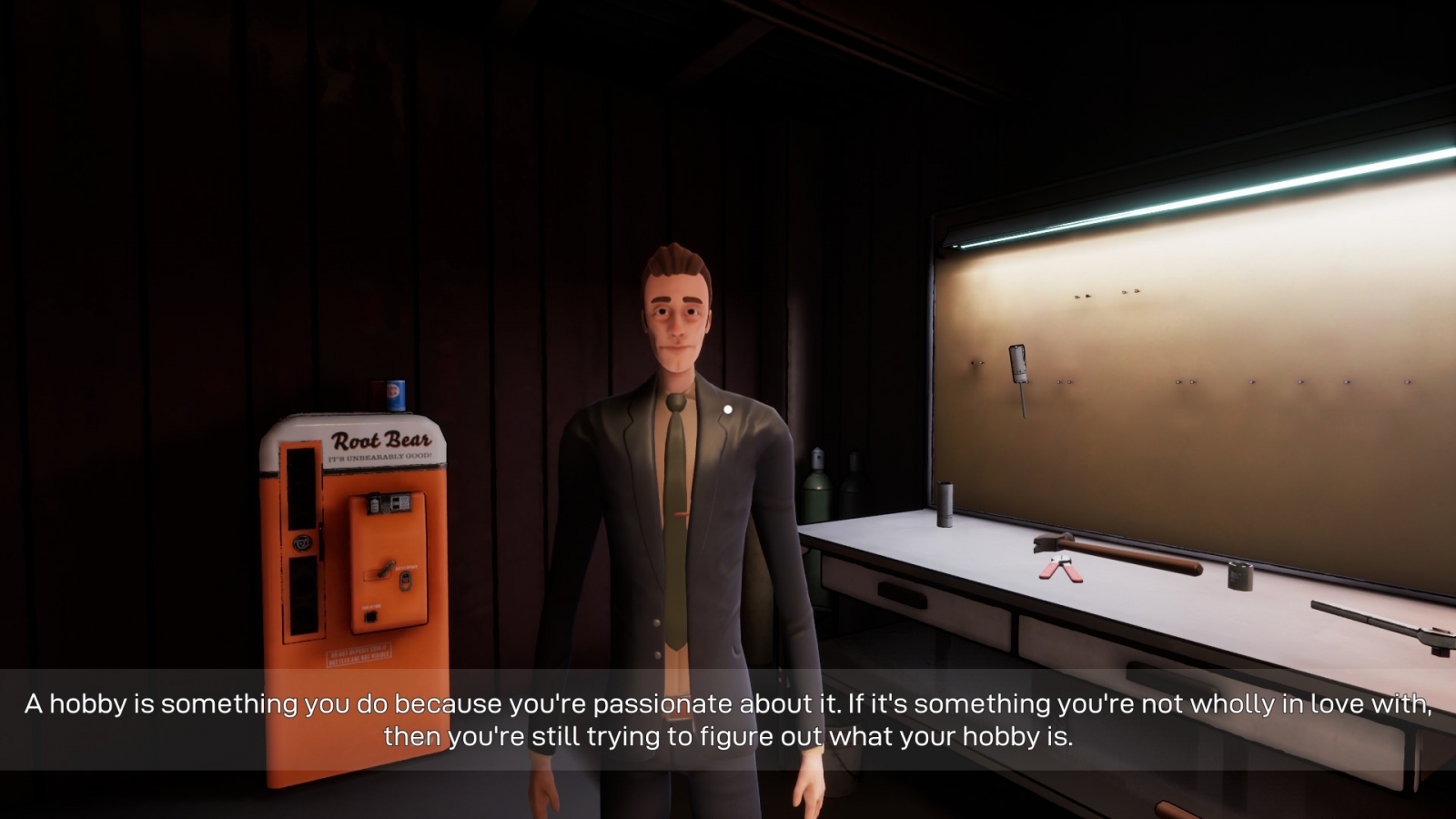 What Adios says I’ll leave up to you, while I have my own ideas just like in my review of Anodyne 2 I don’t want to color anyone else’s perception of the game before going in. On top of that, to be honest I’m still figuring out what the game means to me. Like many of my favorite games, it sticks with you long after you stop playing and I want to keep examining it as a piece of art.

Unfortunately, Adios isn’t a perfect game. The art style looks great, with sharp, black outlines on objects, but can be inconsistent at times. Initially I thought the mossy rocks that dot the farm were weird, half globe things because the grey has sort of a bluish hue to it. The horse also looks very out of place in my opinion. Now, this aesthetic is anything but realistic, but that horse still looks alien to me next to the hitman, pigs, and goats. I can’t quite put my finger on why, but after two playthroughs (at least) it just does not look right to me. 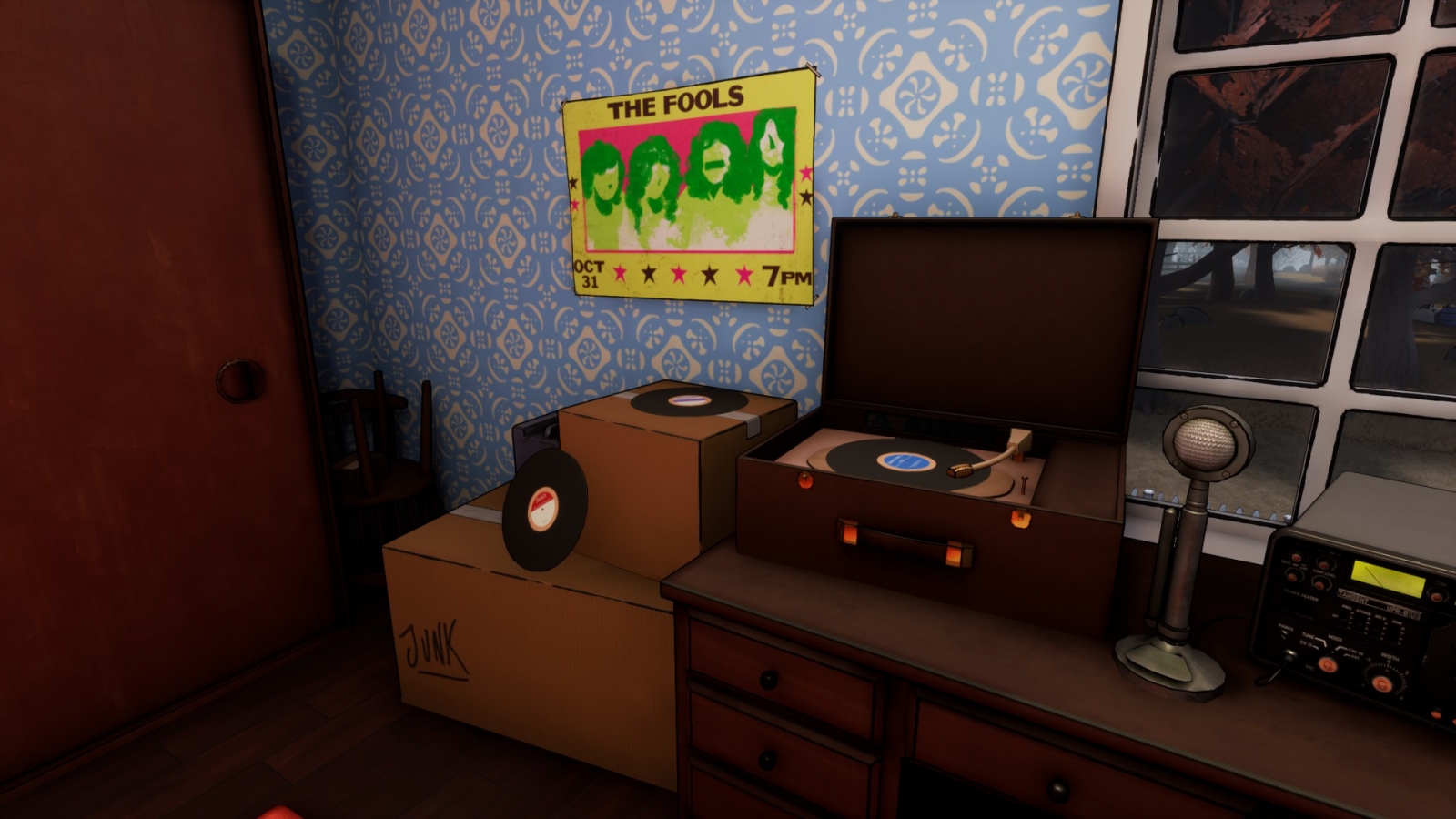 I’ve also mentioned the game can be glitchy. When I first started the game after adjusting resolution and visual options, a few seconds into the first scene the game reset itself, though with the hitman now stuck in an animation of leaning on the pigs’ pen… while inside the fence. I also got stuck inside doors after opening them a few times, and the final scene where you cook dinner just doesn’t feel great in general. You have to pick up ingredients and chop them before cooking, which lead to me dropping a lot of food on the ground to then pick up the knife and cut them on the floor since attempting to put anything on a counter is a fruitless (pun intended) endeavor. I also found the instructions for cooking various dishes to be a little confusing. They’re written from the farmer’s perspective in a way that shows he’s basically only been making three or four dishes for himself for a very long time, but can be confusing to follow along.

Adios is a narrative achievement. It uses the medium of video games to tell a deeply human story that will stick with you long after you put the game down. With some of the best voice acting in the business Adios is a must play and one of my favorite games this year.

David is the kind of person to wear his heart on his sleeve. He can find positives in anything, like this is a person who loved Star Fox Zero to death. You’ll see him playing all kinds of games: AAAs, Indies, game jam games, games of all genres, and writing about them! Here. On this website. When not writing or playing games, you can find David making music, games, or enjoying a good book. David’s favorite games include NieR: Automata, Mother 3, and Gravity Rush.
Related Articles: Adios, Indies
Share
Tweet
Share
Submit