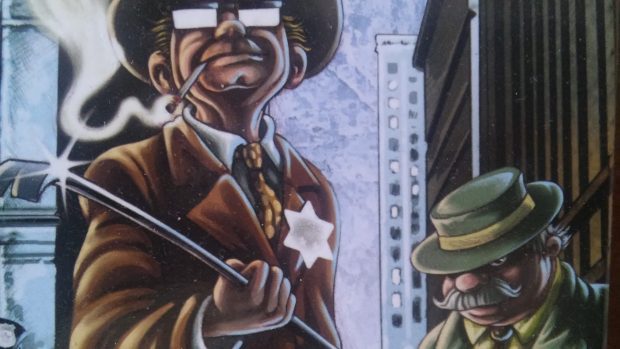 Successful smugglers can only move their wares past the authorities with careful planning, deep intuition, and a sense of daring. Prohis is a three to six player card game designed around the heart-stopping moment of truth as a police officer winds his way around your cargo deciding what to inspect. Despite some intelligent decisions that make for the occasionally memorable interaction, Prohis never quite lives up to its promise and consistently leaves something to be desired.

Everything positive about Prohis that would earn praise is tempered by something that causes it to fall short. For instance there are two types of cards: cargo and prohis (long forgotten slang for “prohibition agents” who enforced the law in the brief period between amendments). The prohis cards call back to every bit of twenties era gangster archetype you can call to mind: the mix of sleaze and class, the decency yet corruption of the police all come through against a muddy background that visualizes how smugglers would picture the police. The cargo cards are crates. Nothing more. Some have a red background and some a green, and as the game goes on you do not appreciate how many of these you see without breaking up the monotony.

This, sadly, is all you tend to see in your hand the entire game.

The point of Prohis is to make convoys out of cards from your hand that will have a mixture of goods, either illegal or legal, and a prohis card. If the convoy goes through uninspected, you place all cards facedown in your score pile to count at the end of the game. However, any player may play one of their prohi cards from their hand to stop the convoy and inspect some of those cards. Differing prohis of higher or lower value can inspect more or less, from one to three. At that point the active player can choose to bribe the inspector with any number of cards from his or her hand to stop the inspection. The inspector can either accept, taking the cards facedown into their score pile, or decline and continue inspection. If only legal goods or prohis are revealed the convoy gets scored and the inspector loses their prohis card. If any illegal goods are flipped up, the inspector takes the convoy and scores it for him or herself.

There we have the entire game. It ends when the deck runs out and everyone counts their score pile. In principle the game is about careful, simple interactions and resource management. You never know who will call your bluff or how much your opponents will have in their convoy. And therein lies the problem: everything is face down, so you never will know. Apart from guessing and keeping track of opponent’s draws, only a portion of which are face up, you can never know what is on the table. The game feels like an exercise in pure randomness. Whether to inspect or not, run illegal goods or not, or anything else in the game has no tempo governing it. Nothing differentiates one run from the next apart from the fact that you may have a higher scoring convoy at one point.

The Prohis cards are powerful, thematic, and rare enough that they don’t have enough of an impact.

For an example, at one point near the end of the game I made a real gamble. I had a convoy of two legal and two illegal goods and nothing to bribe with. When no one chose to inspect I thought I had pulled of a daring heist until I realized that whether my opponents wanted to inspect or not had nothing to do with me. They didn’t know what I had played earlier or how I was feeling about my score, so they had no information with which to guess about what I had played. So little differentiates the cards that you have no incentive to play differently at different points in the game, apart from the inherent risk of inspecting a valid convoy. The game feels like a series of random decisions that ends at an arbitrary point. There is no build up to the end of the game. You realize the deck has run out and everyone counts their score piles. The game could be shortened by removing cards and lose nothing in the change.

There are occasional moments of play that show you everything Prohis is trying to be. When someone can only inspect one card in a four card convoy and the player offers a bribe you have to stop and take a breath to wonder what is going to happen next. With the face down nature of the game you can never know unless everyone perfectly remembers all of their plays throughout the game. I am sure there are groups who will play this game repeatedly, finding some nuance as much in the game as with their own group dynamics. For most the other games which fill a similar purpose and do not ask so much effort of their players will be a better buy.

Prohis is a game of bluffing, deception, and timing with so little emphasis on the timing that the other elements fall flat. While there are moments which make the game feel like it is really working towards its purpose these are mired in an experience that overall leaves too much to be desired.

John Farrell is a legal aid attorney specializing in domestic violence, living in West Chester Pennsylvania. You can listen to him travel the weird west as Carrie A. Nation in the Joker's Wild podcast at: https://jokerswildpodcast.weebly.com/
Related Articles: Prohis, Tabletop
Share
Tweet
Share
Submit