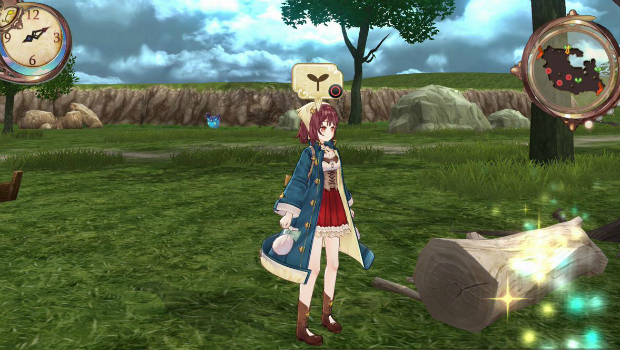 The Atelier series is an underdog in the JRPG world that had one particular standout performance on the PlayStation 2, and has since been a source of reliably fun, but never particularly noteworthy games.  Since the release of the PlayStation 4, the Atelier series has been relegated to the Vita system.  Stashed away there where few tread, Atelier games have long deserved a proper next gen release.

For Atelier’s debut on the PS4, Koei Tecmo pushed to improve the game to the limits and make their best product possible.  Atelier Sophie: Alchemist of the Mysterious Book is, in every possible way, a triumph of that hard work and vision, and by far becomes the best game in the series with a streamlined battle system, an expanded item creation system, and a surprisingly diverse set of characters telling a genuinely interesting and unique story.

In Atelier Sophie, you play as the titular character, a young and incapable girl who runs an alchemy shop called an “Atelier.”  Sophie is left alone after the death of her grandmother, and decides that she should become a better alchemist so that she can support herself and follow in her grandmother’s footsteps.

Her first bit of work leads to the discovery of a mysterious flying, talking book named Plachta, hidden among other books in her shop.  With the help of friends, both old and new, Sophie takes to the surrounding area to grow her craft.  As she expands her alchemical skills, she writes them into the book, Plachta, who slowly remembers what and who she really is.

Atelier Sophie uses a time dynamic for everything, and it works to blend the story, the fighting, the scavenging, and the item creation into a flowing stream that forces you to always push forward and never dwell on one part of the game.  As you travel, talk, fight, or pick up items, time moves forward.  As you return home to store items, story events occur based on how you’ve played and what you’ve done so far.

The social aspect of Atelier Sophie is rather simplistic, but yields great results.  Sophie has to work with many people around the town of Kirchen Bell, her hometown and the base of operations for the game.  This means talking with them during off-times, which leads to special cutscenes, items and money gifts, and even new party members.  Eventually the game allows you to give gifts to shopkeepers and your friends around town, and this further opens up possibilities for game expansion.

Perhaps the least important part of the game, but definitely the most improved from other Atelier titles, battles are almost always optional and have very little risk, but as a result are incredibly tough and operate on a sliding scale to keep you from pushing too hard all at once.  While past Atelier games had a slow-paced support system that made you decide when and how to use support attacks.  Atelier Sophie releases some control in exchange for streamlining, and the results are fantastic.

Turn-based, the battles operate using a sliding scale to determine order.  It’s simple, but it works.  A gauge needs to fill to 100%, allowing characters to use support actions.  An offensive or defensive stance determines if the character will support attack or defend.

As the game progresses, the gauge expands.  First the gauge locks at 100%, allowing for constant support actions to occur.  Building it to 200%, and later to 300% triggers special team attacks with devastating results.  This makes using special and powerful attacks very simple, but more frequent.  It also restricts their use on simple enemies.

Battles never feel too easy, unless you’re highly overpowered for the area, and as you fight more and scavenge more items, the monsters in the area get stronger.  Of course, if you lose in battle, you only lose some of your scavenged items and return home.  It’s very forgiving, but presents its own challenges as well.

Scavenging and item creation is the most important part of the game by far, in the name of the game itself twice.  When you leave town, the primary function is to scavenge items.  You can fight to get some items from monsters, but mostly you’ll find items in the field itself.  Little shiny sprites represent a handful of resources to collect, and you can determine the quality of the items by how the sprite looks before collecting it.

Each resource has a myriad of information far expanded from previous Atelier games.  Items are given multiple quality indicators, including a level, a quality number, and a letter grade.  Higher graded and quality items will have more “traits” which you can transfer to new items created.  Once you reach your limit, you return home and store everything in the collection, and get to work creating items.

Again, Atelier Sophie takes full charge in expanding and improving on the series gaming dynamics, and perhaps nowhere bigger than with the “alchemical” item creation.  In the past, this was rarely anything more than just selecting the best items and letting it ride, but Atelier Sophie adds a puzzle element to item creation that makes it far more hands-on and incredibly fun to do.

You select the item you want to create, and then select the items you want to make it with.  Each item has a color, number, and takes up a number of spaces on a 3×3 grid.  This can be a straight line, a three-tile corner, or something more complex or large as the entire grid itself.

You then place each item in the cauldron, with cauldrons having different sized grids starting with 4×4.  Placing the items on the grid with little overlap can cause stronger items, and new traits and abilities to be unlocked.  Incredibly fast to learn, but always a challenge, this is perhaps the smartest and most successful expansion of the game’s standard dynamics, and will leave you addicted.

The game has a 3D cell-shaded design for the characters that allows for a really nice anime style to come alive, and the areas you explore are actually well detailed with well placed design elements.  The cutscenes are fully animated, and while they are still anime cutscenes with a lot of standing around and weird tropish “reaction actions”, they are much appreciated over less animated scenes from most other modern JPRGs.  The music is incredible and fits the mood accurately, with a lot of blazing guitars and soft tones, and a special set of percussion that is a signature of the Atelier series.

Atelier Sophie: The Alchemist of the Mysterious Book

Patrick Rost has been with Gaming Trend since 2013. At first focused on sports coverage, Patrick has gone on to cover a wide range of games and other products for the website. Outside of Gaming Trend, Patrick writes and records music, grinds perpetually in Elder Scrolls Online (PS4), and lives day to day with his two dogs, Bob and Stella.
Related Articles: Atelier Sophie: The Alchemist of the Mysterious Book
Share
Tweet
Share
Submit