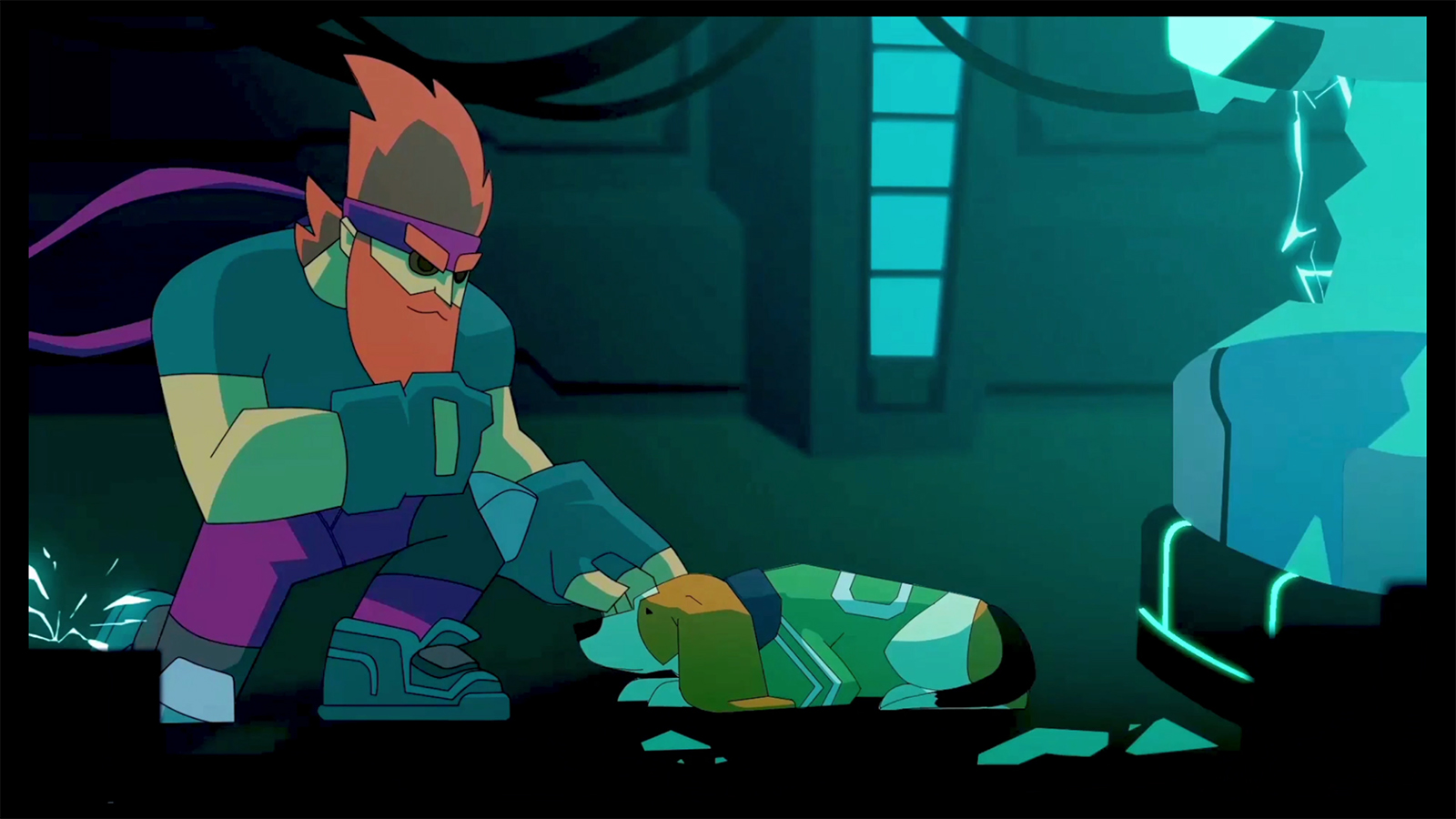 The Last Friend is like chicken and waffles. It combines two unlikely genres — tower defense and beat ‘em up — and creates a surprisingly balanced amalgamation. It lacks depth and needs a better story, but this is the way I want to play tower defense from now on.

You control Alpha. He’s awkward, says very little and grunts a lot — and he’s annoying. I wanted more from him; some kind of humanity: humor, sadness, happiness, anything. It never shows up. The developers were clearly going for a character whose minimal and short responses came off as humorous, but it never resonated. At least he spends his time rescuing dogs. That’s noble, even though I never ever felt it.

Alpha is joined by his pet dog, T. Juan. I can’t tell if that’s wordplay for Tijuana, but T. Juan is the brains of the operation, and he can’t stop jabbering with his opponents and they can’t stop jabbering back. It’s exhausting, especially when T. Juan talks to Alpha and all he can offer is a *grunt*. The dialogue is clearly meant to mimic the kind of interactions found in Saturday morning cartoons but there is no reason to care about any characters. It feels like walking into a party full of people you don’t know and they’re trying to be funny. A few lines made me chuckle but when you’re relentlessly trying to make jokes, of course something will land. 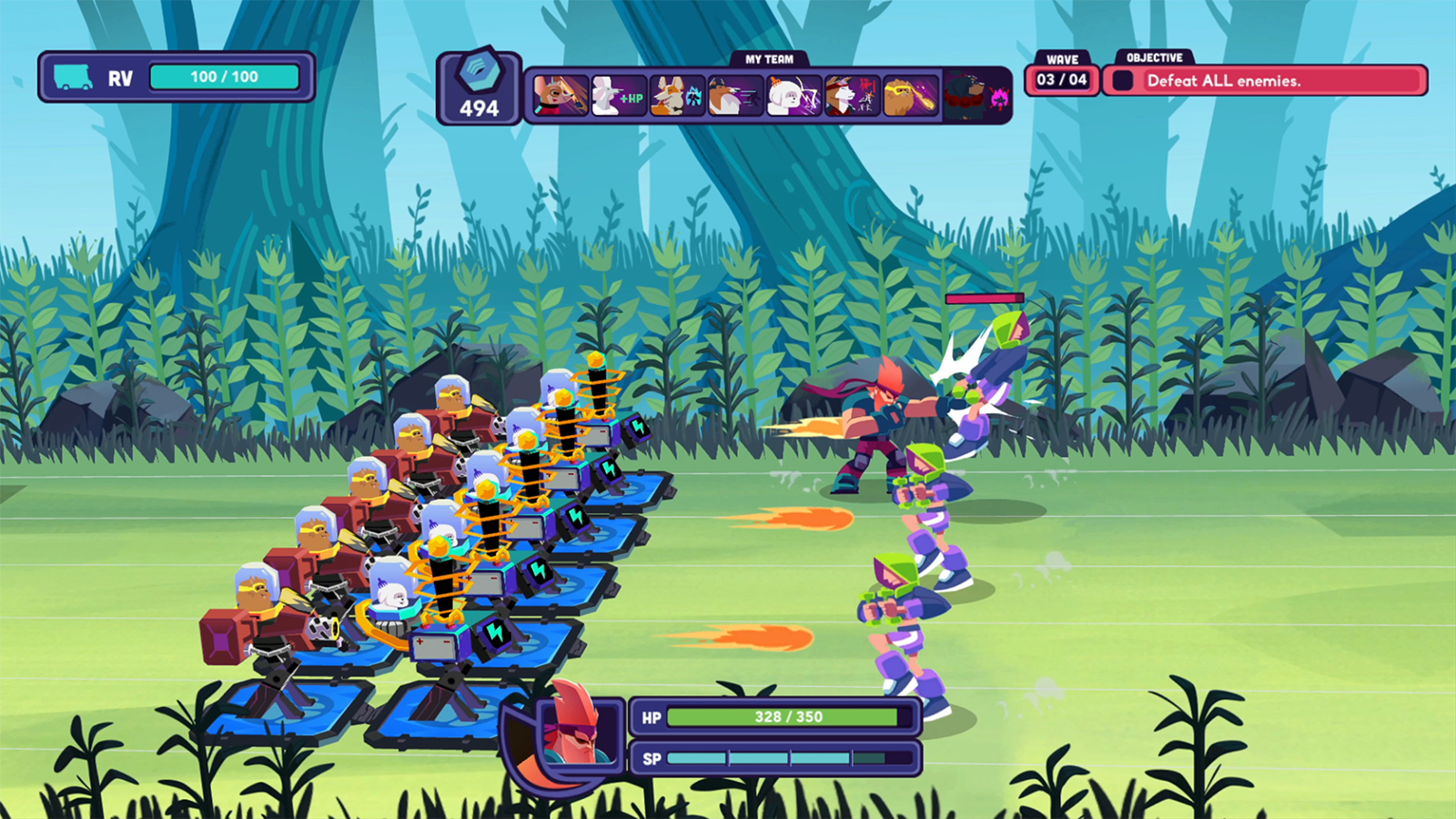 Alpha represents the beat ‘em up half of The Last Friend, while the dogs Alpha rescues represent the tower defense half. Alpha jumps between lanes, pummeling baddies with punch and kick combos as they rush the RV trying to steal the dogs he’s rescued. Trying to slow the onslaught feels appropriately frenetic and sometimes delightfully overwhelming. Three enemies could occupy one lane while two heavy hitters storm another lane. Figuring out who to deal with first is no longer about making sure you have enough turrets and gleefully watching them mow down adversaries, you’re literally controlling the flow.

Thankfully, every dog you rescue helps make your life easier. Each dog becomes a turret, firing raw damage, setting damage over time, or providing defense without any weapon. Skill dogs grant buffs to yourself and turrets, and debuffs to your enemies. Super dogs need to be charged, and when released, they bring devastating effects to every enemy on the field. With 40 dogs between turrets, skills, and super, it’s possible to create a playstyle that suits you, but importantly, succeed with it. Unrelenting offense works, burly defense works, or a mix between the two. It’s possible to fixate on brawling or focus on laying turrets like traditional tower defense. But that’s so 2009.

Part of what makes any playstyle possible comes from the uncomplicated challenge. It doesn’t negate the excitement because you still have to execute, but I found myself using the same strategy until I was close to the end. That’s when the only challenge relied on using a specific strategy for the rest of the game, which felt like it was too late. It took too long for the difficulty to increase and challenge my ideas. By that point, I saved most of the dogs, so anything an enemy tried wasn’t going to work. I wasn’t overpowered, just prepared for anything.

Side missions are more challenging. Those missions restrict which dogs you can bring to battle with you, and I can count two that made me think twice about how to approach them. But for the rest of the missions, I could generally stick to my strategy, which was focused on slowing enemies and offense, and still succeed with little effort. 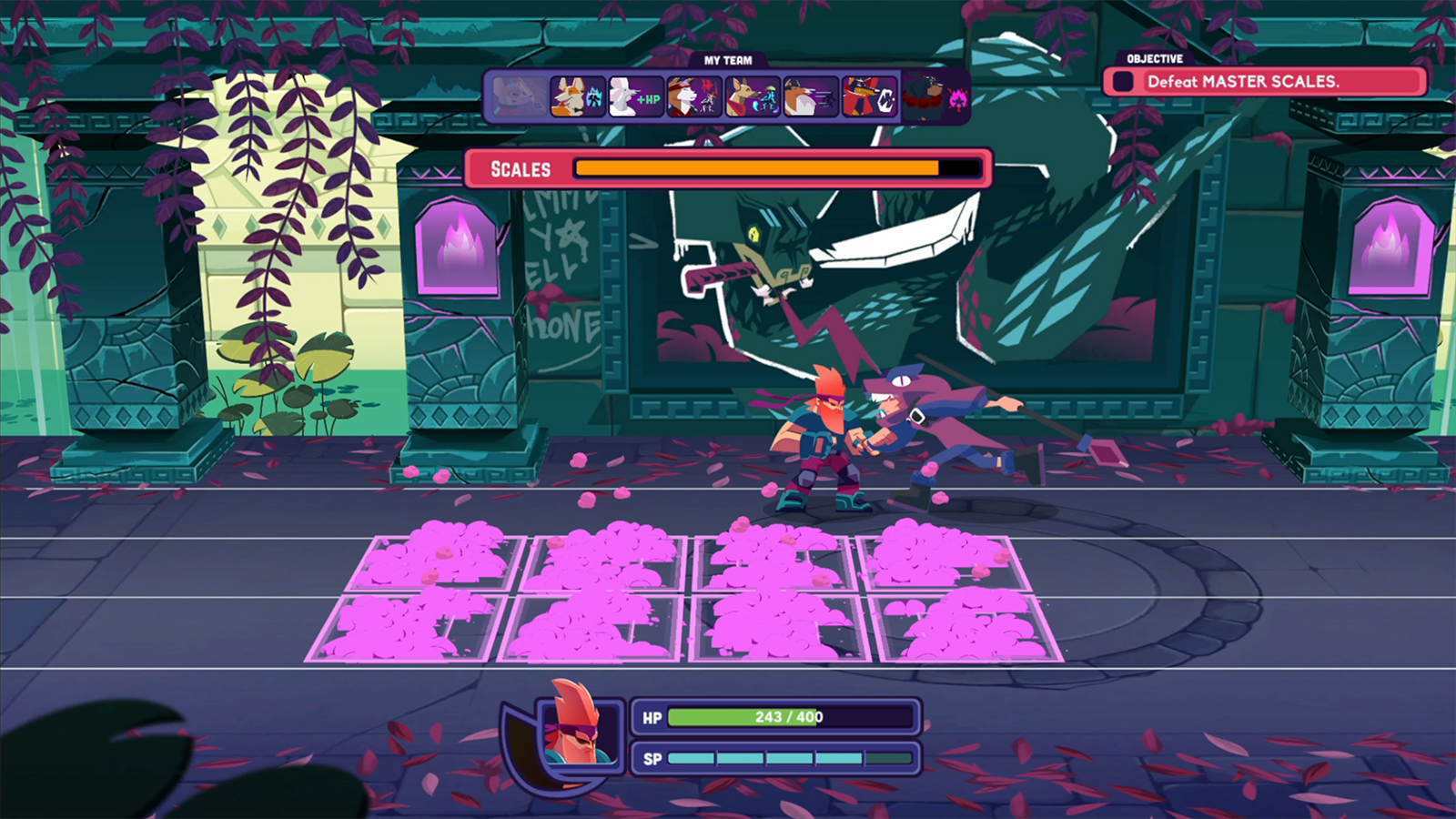 Despite the soft difficulty, I wanted to keep playing. There are five worlds and each world surprised me with the kind of enemies I encountered. Let me be clear: The Last Friend is easy but you can’t be careless. I developed a strategy based on what I was being challenged with, and I didn’t want the enemies touching my RV. It just happened to work for most of the game. But enemies launch grenades that damage multiple spaces, enemies with bo staffs leap multiple spaces, some have shields, some have elemental area of effect attacks, and one enemy can decimate an entire lane of turrets with one attack. There is no shortage of imagination when it comes to, at least, making me sweat for a brief moment.

I love the boss fights, too. These are one on one fights that are constrained within the tower defense mechanics. There are no turrets. Just Alpha and the boss. It’s about hopping between lanes fighting to see who beats the health out of who first. These also aren’t difficult, but they require thoughtful use of Alpha’s skills, thankfully, but only happen a handful of times. It would have been nice if The Last Friend had more fights like that.

This is the way I want to play tower defense from now on. The Last Friend isn’t a challenging first attempt at combining tower defense and beat ‘em up, nor good at telling a quality story, but it has fantastic mechanics. Weak difficulty aside, each world brought imaginative enemies and bosses and surprises that made it worth seeing what came next.